The Biggest Winner From the Trade Wars

“The United States of America versus China… For much of the year, a looming battle over trade has been hyped as 2018’s title fight,” says Alan Knuckman, our eyes and ears at the Chicago Board Options Exchange.

“But here’s a big secret the media won’t tell you,” Alan continues, “This ENTIRE ‘trade war’ is for show.”

It’s this simple, Alan says: Neither China nor the U.S. can afford a protracted trade dispute; even though the U.S. is the largest importer in the world — wielding the biggest stick in this particular fight — it doesn’t want to jeopardize “some of the biggest growth… seen in years.

“So while the jawboning between Washington and Beijing will continue to play out in the press,” says Alan, “the real work is being done behind the scenes to hammer out a deal that works for everyone.

“What does that mean for you?” Especially once the trade war vanishes and the dust-up settles?

“In fact, a swift end to the trade talks would send stocks SOARING,” Alan says.

And the biggest gains won’t be in the U.S. stock market, where growth in the S&P 500 has only been a — meh — 3% for the year… but they’ve held up pretty well for all the mainstream’s sturm and drang.

“On the other hand,” says Alan, “Chinese stocks have cratered since the fighting began. The Shanghai Stock Exchange is down 15% on the year.”

“Whenever the war ends, it’ll be cheap Chinese stocks that outperform.” Aha.

“As of May,” Alan says, “Chinese ‘A’ shares have been granted inclusion in the all-powerful MSCI Emerging Markets Index.

“The index inclusion sets these stocks up for investments of billions of dollars from large institutions all around the world,” he says.

And the “smart money” is already moving in, capturing discounts of 14%.

“How can you play the action?”

As Alan sees it: “The easiest way to gain broad Chinese exposure is through an

With a trade war resolution, Alan believes shares could easily run up to $54 — their former peak — and almost 30% up from where shares languish today.

To Alan’s readers, he says, “Stay tuned” for even more opportunities in Chinese stocks.

[Ed. note: Through midnight tonight only, Alan will show how to turn a small stake into more than $135,086 in just days… in three simple steps.

And do it over and over again…That’s because Alan’s not a buy-and-hold guy; he’s one of America’s No. 1 traders who’s closed 76 positions in about a year.

The total winning gains of those 76 closing plays?

Long story short: Alan’s a master trader who wants to show you how to get in and get out fast, with big profits. Click here — before midnight tonight! — to learn how. ]

“Ever since volatility hit the markets back in early February,” our income expert Zach Scheidt says, “the S&P 500 has struggled to get above the 2,800 level. 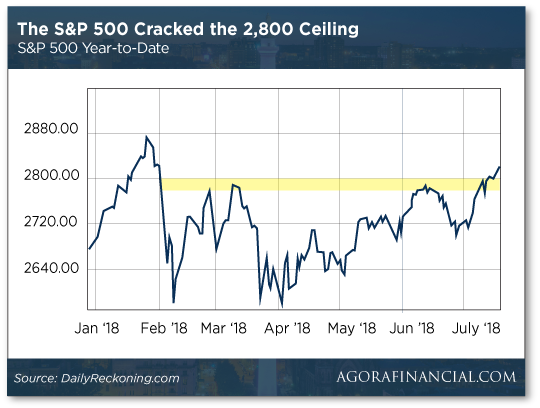 “The index has pushed all the way up to that all-important 2,800 level once again,” he says. Healthy earnings appear to be the momentum the market needed to rise above this key level.

Zach says: “This breakout actually makes a big difference because it gives investors confidence that we’re turning the corner and getting close to overtaking the highs from earlier this year.”

And he’s heartened the S&P 500 broke out even after Netflix’s less-than-stellar earnings report.

While the FANG stocks have been instrumental to the bull market’s strength, “this is a very healthy sign as it shows that the broad U.S. market is moving higher and it’s not just a few stocks that are accounting for all the gains.”

About 52% of the S&P 500 stocks are up this year, according to CNBC. Not a wide margin — certainly — “but it tells us that a broad number of companies are trading higher, not just a handful of the big names like Netflix or Amazon,” Zach says.

Some of his favorite names right now are in retail. It’s not all about Amazon, he says: “A lot of other retailers are participating, helping to drive that breadth (or more stocks trading higher) in the overall market.

“Some retailers I’ve recommended in the past — and still recommend — include Columbia Sportswear (COLM), American Eagle (AEO) and Under Armour (UAA).”

To the markets, where two earnings reports are generating movement — in opposite directions.

Alphabet (GOOGL) beat expectations on earnings — so much it’s making traders forget about that $5.1 billion fine from the European Union. Shares are up 4% this morning.

“Another sector that catches my eye is financial stocks,” Mike continues.

“Banks are a prime beneficiary of rising interest rates and lower taxes, plus they’re attractively valued after underperforming the market recently.”

Mike says: “We can expect fresh buy signals from all these sectors in the weeks ahead.”

“2018 will forever be remembered as the year that hating plastic straws went mainstream,” says an article at Reason.

Now the largest food and drink retailer in the U.S., Starbucks, is entering the environmental crusade with an announcement the coffee chain is phasing out straws.

“This is a significant milestone to achieve our global aspiration of sustainable coffee, served to our customers in more sustainable ways,” says Starbucks’ CEO Kevin Johnson.

“The coffee giant says that by 2020 it hopes to have eliminated all single-use plastic straws at its 28,000 stores worldwide.

“It will now top all its cold drinks with fancy new strawless lids that the company currently serves with its cold brew nitro coffees. (Frappuccinos will still be served with a compostable or paper straw),” Reason says.

Fawning praise streamed in for the coffee purveyor from the likes of the World Wildlife Fund, Ocean Conservancy, The New Republic and Slate.

But they can all suck it : “The inconvenient fact,” says Reason, is “that by ditching plastic straws, Starbucks will actually be increasing its plastic use.”

Did you catch that? Increasing?

“As it turns out, the new nitro lids that Starbucks is leaning on to replace straws are made up of more plastic than the company’s current lid/straw combination.

“Right now, Starbucks patrons are topping most of their cold drinks with either 3.23 grams or 3.55 grams of plastic product, depending on whether they pair their lid with a small or large straw. The new nitro lids meanwhile weigh either 3.55 or 4.11 grams, depending again on lid size.”

Reason contacted Starbucks with their findings, asking “What the what?!”

Starbucks responded, saying: “The introduction of our strawless lid as the standard for nonblended beverages by 2020 allows us to significantly reduce the number of straws and nonrecyclable plastic.”

So Starbucks’ move will really just create more plastic that can be recycled. Got it.

That’s cold (brew?) comfort, though, taking into account that most of the stuff we set out on the curb for recycling winds up at the dump anyway.

“Pictures of turtles with straws up their noses are certainly jarring,” Reason says. No arguments here…

“At most,” however, “straws account for about 2,000 tons of the 9 million tons of plastic that are estimated to enter the ocean each year, according to The Associated Press — 0.02% of all plastic waste.

“The pollution problem posed by straws looks even smaller when considering that the United States is responsible for about one percent of plastic waste entering the oceans, with straws being a smaller percentage still.”

But those who’d ban straws remain unconvinced — willfully so.

One stat that continues to be bandied about in such “respected” outlets as the WSJ and The New York Times claims Americans use 500 million straws per day.

Know where that factoid came from? The “research” of a 9-year-old back in 2011. (We think he got first place at the science fair if that ups his credibility… heh.)

OK, so why not just placate the anti-straw lobby and use eco-friendly disposable straws? No harm in that, right?

First, paper straws literally suck (we’ll stop now), collapsing in on themselves halfway through your drink. Second, straws made from compostable materials cost five–six times more than plastic straws. Guess who’d absorb the upcharge on that?

“By adopting a myopic focus on banning straws,” Reason says, “environmentalists, city councils and conscious capitalists are, at best, having no significant impact on the overall problem of marine plastic waste.

“At worst, they are pushing expensive prohibitions on consumer choice that are counterproductive — at least in the case of Starbucks’ ban.”

“Thanks for the critique of the Trumpian verbal attack on Iran,” says a reader in response to yesterday’s issue at The 5.

“Americans, including our government under various administrations, are largely ignorant of our history of relations with the country, in most of which we come out very badly.

“We should expect Iranians to hate us, but surprise, surprise, when the World Wide Wrestling competition was held there several years ago, reporters were astounded to find Iranians very — even amazingly — friendly.

“Thanks to one rare benefit of the shah’s rule, thousands of Iranians were sent to the U.S. for graduate study, so that perhaps a majority of faculty in at least some universities have U.S. degrees, and there is regular correspondence with American scholars.

“Even Iran’s foreign minister has, if I recall correctly, a Ph.D. from the U.S.

“Someone once said that you can catch more flies with honey than with vinegar. If we can cuddle up to the Japanese and Vietnamese governments, whose soldiers killed thousands of Americans (how many have the Iranians killed? — check with the Cato Institute), why can’t we pursue a positive approach to Iran?

“Our negative approach merely strengthens the anti-U.S. minority and weakens the hands of the majority who would like to see good relations with the U.S.

“Iran has the most highly educated population of any country in the Middle East outside of Israel and would make a much better ally than any of the despotisms we have coddled for so long.

“(If the terrorists who carried out the 9/11 attacks had been from Iran, we probably would have retaliated with all-out war, but as they were all from our ally, Saudi Arabia, little was made of the fact, and most Americans probably don’t even know it.)”

“Perhaps I am reading between the lines with an overactive imagination,” says another reader, “but I interpreted the president’s wording — ‘CONSEQUENCES THE LIKES OF WHICH FEW THROUGHOUT HISTORY HAVE EVER SUFFERED BEFORE’ — to imply a cyberattack bigger than Stuxnet.”

The 5: Could be. As we documented last year, for every dollar the feds spend on cyberdefense, they spend $9 on cyberoffense.

P.S. As good as Alan’s past track record’s been, he’s about to take trading to another level.

Starting with his summit — and what he calls “vertical trades” — Alan believes his strategy’s the fastest way for anyone to get rich in America today.

Remember, it closes tonight at midnight so don’t wait to catch up right here.