If you’re a regular reader of The 5, you know we’ve tackled the issue of borderline-insolvent pension funds… and Nilus is riffing on the same theme.

“I expect the number of defined-benefit pension plans to continue dwindling as additional firms look to freeze existing plans, stop offering them to new hires and/or eliminate them altogether,” Nilus says.

It’s easy to understand why…

“Making a promise to provide guaranteed income to retirees — especially at a time when people are living longer — puts a massive burden on a company.”

If the market takes a tumble or a pension-fund manager makes a keystroke error — saying nothing of garden-variety incompetence — pension funds can turn into a quagmire of broken promises and corporate liability.

To offset this turn of events, the government requires companies offering pensions to, per Nilus, “shore up their plans with cash infusions.”

“The last thing a company wants to do is part with its precious cash,” Nilus points out. Nevertheless, “employers have to shore up their plans and deliver what they’ve promised.”

Here’s a list of some companies with the most glaring pension-fund deficits: 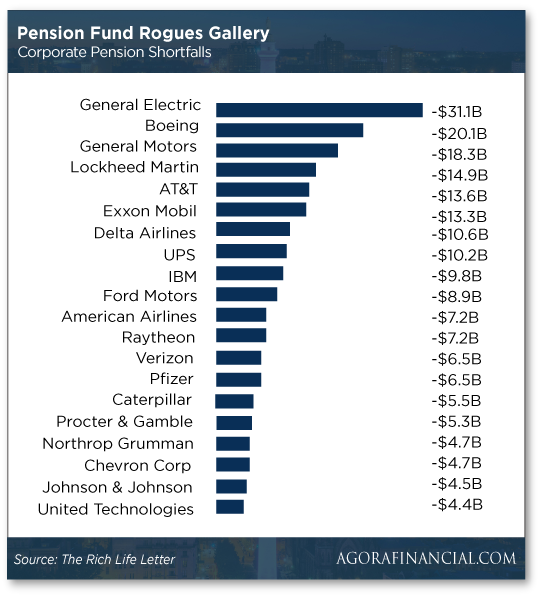 “General Electric is the worst offender,” Nilus says. “Its plan — which covers more than 600,000 people — is underfunded to the tune of $31 billion.

“Other… companies — including Boeing, General Motors, Lockheed Martin and AT&T — have huge gaps of their own.”

While many of these private retirement plans are languishing, “it’s the exact opposite situation for thousands of bankers.

“Financial firms,” says Nilus, “have been putting themselves first since the beginning of modern finance.”

Heh… no surprise there.

Not only are some of these bank pensions fully funded to the penny, but some are operating with a surplus.

“At the beginning of last year, Pensions & Investments looked at defined benefit-pension plans across the United States,” Nilus says. “Out of the top 10 richest companies, HALF were banks:

As for Bank of America, “there was a tremendous $3.257 billion in extra money above the $14.982 billion actually needed for the company’s workers.”

“One of the primary reasons that companies overfund their retirement plans is for the tax benefit of doing so,” says Nilus.

But… with the new corporate tax rate of 21% rather than 35%, some bank pension funds are going to start pulling back on contributions.

“The end result could be more cash going into regular shareholders’ pockets rather than the employee retirement plans.”

In fact, the 25 largest banks in the United States are looking to increase their dividends by a staggering 25%, to $30 billion, this year.

First, he says, “A wave of consolidation is about to hit the banking sector, and that could unlock value for… investors.” Money saved from overfunding pensions and corporate tax cuts can be used for M&A.

Not to mention “the larger regulatory environment also just got much more favorable for… banks.

“In May, Congress and President Trump enacted legislation that rolled back some of the Dodd-Frank regulations passed in the wake of the financial crisis.

“In practical terms, this makes life a lot easier for [some] companies” — allowing them to trade for their own benefit and invest in hedge funds and private equity.

“To top it all off,” he continues, “interest rates have continued to move higher with the latest Fed hike earlier this month and two more expected before year-end…

“That’s a strong tail wind for banks… because they earn better net interest margins — the difference between what they’re getting on deposits versus what they’re paying out to customers,” Nilus says.

So even if pensions are going belly up, you can take advantage of the positive byproducts of bankers’ pensions, Nilus says, “to get the steady, reliable income streams you’ll need for the years ahead.”

[Ed. note: Nilus recently blew the lid off one of Wall Street’s best-kept secrets — one that enables you to pocket $400 in only 90 seconds. Here’s the proof.

Of course, Wall Street wants this video taken down ASAP — to hold onto this secret. Click here to watch it while you still can.]

On to the markets… where Facebook opened down 18%. The social media juggernaut’s not looking so juggernaut-like.

Facebook’s earnings report reveals while the platform’s number of users is still growing, it’s sloooowing down.

(So, like, exponential growth doesn’t go on forever? Well, there are only so many humans on the planet… heh.)

All that to say Facebook’s dragging down the tech-heavy Nasdaq; at last check, it’s down 65 points, to 7,867.

But the Dow is adding to yesterday’s gains after a vague handshake agreement between Donald Trump and European Commission President Jean-Claude Juncker to keep talking. For now, the trade war’s on hold — at least on the European front.

Other market movers include Qualcomm — up 5% after the Chinese government nixed its acquisition of NXP Semiconductors (which is down nearly 6%). It’s safe to say the deal would have gone through had Washington approved Qualcomm’s acquisition by Broadcom earlier this year… but the Trump administration killed that deal.

Checking in on commodities: A barrel of crude sells for a shade under $70, while gold’s priced at $1,226.

“China needs to sell its goods and services to the U.S. in order to stay economically viable,” says our income expert Zach Scheidt.

Piggybacking on Alan Knuckman’s comments here Tuesday, Zach says, “America, on the other hand, doesn’t need China quite as badly.”

With that in mind, investors have been selling off Chinese stocks. “The damage has already been done and the basic assumption is that the trade war is happening.” Zach continues.

“So if you invest in Chinese stocks right now, you’ve got limited risk because the idea of a trade war has already been accounted for.

“Stocks are less likely to trade lower at this point because the perception is already pessimistic.”

If China says uncle, all the better because investors will breathe a sigh of relief and start buying again.

“So which Chinese stocks should you be looking at right now?

“I’d suggest taking a close look at resort and gaming companies that operate in the offshore city of Macau,” Zach says. “This is one of the most exciting destinations for vacationers in all of Eastern Asia.

“The best part is you can actually invest in some well-known U.S. companies that have big bets in Macau.” Zach thinks that’s a win-win situation because you get the safety of a U.S. exchange while benefiting from a rebounding Chinese economy if trade war tensions settle.

“Two of the names I’ve got on my radar are Wynn Resorts (WYNN) and Las Vegas Sands (LVS).”

Both companies are firmly established in Macau and “are extremely profitable, and they know how to set up the perfect destination resort,” Zach says.

“Both of these stocks have pulled back as the trade-war arguments have become more heated,” Zach says, “which gives you an even better shot at significant gains when the conflict is ultimately resolved.”

In its final round of funding, investors dumped $119 million in venture capital on the pot company.

“Acreage is THE prime example for how far we’ve come in terms of public sentiment toward pot,” Ray says.

Of course, Willie Nelson has been an outspoken pot advocate for decades; Boehner, meanwhile, has come around to the idea more recently. (Perhaps he’s taken up a new hobby since his days in Congress… heh.)

Now Boehner publicly endorses a change in public policy when it comes to marijuana, especially at the federal level.

With another $119 million at its disposal, Acreage will be growing its brand with the goal of an IPO on the Canadian Securities Exchange in October.

“While we wait to see if Acreage manifests into a buy opportunity,” Ray says, “there’s an important divergence occurring in pot stocks we need to talk about too.

“U.S. and Canadian pot stocks are moving in opposite directions this week,” Ray continues.

“The sell-off is hurting,” he says, “but rest assured the long-term trend still holds true. Canadian pot is a high-growth market.

“What we are learning is that much of the run-up expected in Canadian pot, pending legalization this year, was already priced into the stocks…

“The actual revenue from recreational pot has not priced itself into the Canadian market yet.

“When cash starts hitting bank accounts and that revenue is noted on the books, get ready for the explosion,” Ray says.

At the same time, U.S. pot stocks look like they’re ready to break out.

“The West Coast is cruising along with its legal markets, and despite some setbacks the money is pouring in.”

And several states on the East Coast are *this close* to legalizing cannabis.

While it got off to a choppy start, “The U.S. pot index is in a sweet spot right now,” Ray says. “The chart’s recent price action is mirroring what some analysts call a coiled spring… 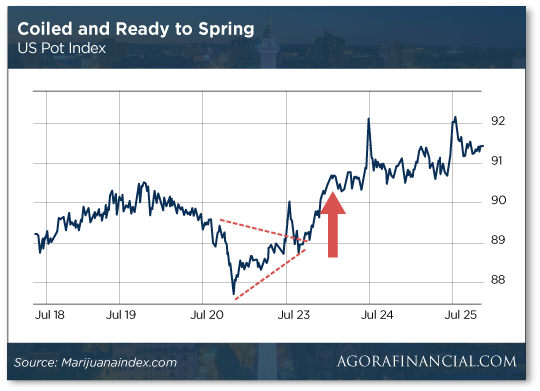 That started a couple days ago…

Ray says: “Get ready for flash gains and potentially a longer run-up that carries us through to the end of the year.”

“Here’s the story of a lovely family home,” says the Los Angeles Times, “which just hit the market in Studio City for $1.885 million.”

That’s right, The Brady Bunch house is for sale! 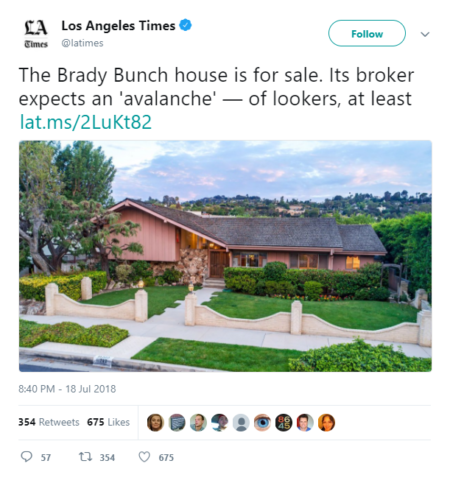 The house, “a Traditional-style residence near the Colfax Meadows neighborhood, was used for outdoor representations of the beloved television family’s abode. That included the show’s opening and closing scenes as well as numerous interludes to denote the time of day.”

Of course, interior shots were filmed in a studio (not to burst anyone’s illusions).

The home is 2,500 square feet of 1970s grooviness and features wood paneling, a built-in bar and floral wallpaper from the era.

“This is a postcard of exactly what homes looked like in the 1970s,” realtor Ernie Carswell says.

The iconic home “sits in an area that has been ripe for tear-downs and new development in recent years.” Nooooo!

“But the owners will give first consideration to bidders who want to keep the home intact.” Phew.

Sing it with me now… That’s the way we all became the Brady Bunch!

P.S. People just like you are collecting 72-hour payouts by buying on Friday and selling on Monday.

But if you don’t act before 3:00 p.m. EDT tomorrow — basically, an hour before the market closes — you’ll miss out.

Learn about the one easy step to take before Friday — to collect big.