The Strange History of the Moon and the Markets

There’s a “blood moon” tonight. But where are the predictions of an imminent market meltdown?

“A blood moon will appear in the night sky around much of the world on Friday night,” reports the Reuters newswire, “as the moon moves into the shadow of the Earth for the longest lunar eclipse of the 21st century.” 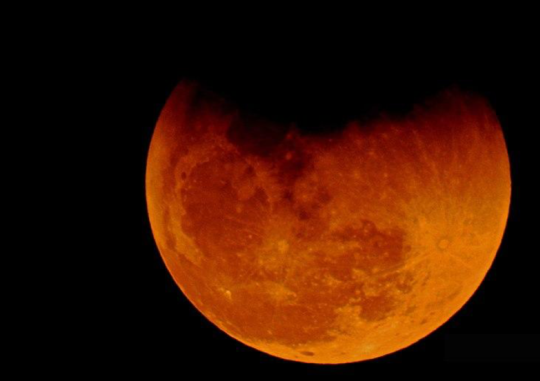 The most recent blood moon, as seen from Kuwait on Jan. 31 of this year.
[Wikimedia Commons photo by Irvin Calicut]

During 2015, blood moons prompted widespread predictions of market panic. “Blood Moon Market Meltdown This Weekend?” blared one website on April 3 of that year. (Recall Betteridge’s law of headlines: A headline that ends in a question mark can safely be answered, “No.”)

The panic really got cranked up with the next blood moon the following September… and the concern extended way beyond the markets. As CNN reported at the time, “to some Christian ministers, the fourth and final eclipse in a tetrad — four consecutive total lunar eclipses, each separated by six lunar months — fulfills biblical prophecy of the Apocalypse.”

But like the “Shemitah” that was supposed to cause so much turmoil that same month, the tetrad was a bust.

Still, this lunar eclipse means we’re smack in the midst of a “Puetz window.”

A quarter-century ago, a researcher named Steve Puetz looked into eight epic market crashes — starting with Holland’s tulip mania of the 1630s, ending with Japan’s meltdown in 1989–90 and including the U.S. crashes of 1929 and 1987.

Note well: The next solar eclipse is less than a month away, Aug. 11.

Puetz ran the numbers and concluded the odds of these circumstances being sheer coincidence were 127,000-to-1.

He also hastened to point out that while epic crashes occur during Puetz windows, not every Puetz window results in a crash.

Nor does the blood moon necessarily portend the outbreak of war.

On Tuesday, the Drudge Report had a scary headline, “UPDATE: ‘Blood Moon’ on Way — With God of War in Tow…”

Clicking the link took you to an article in the Irish Times with a similar headline. Alas, the second part of it merely referred to the fact that on the heels of the blood moon tonight, Mars will shine more brightly than it has in 15 years.

If anything, the prospect of nuclear war is receding this morning, if only a bit.

One of the big headlines overseas this week is elections in Pakistan. A cricket legend named Imran Khan is set to become the new prime minister.

For years we’ve fretted periodically in The 5 about a nuclear conflict between Pakistan and India. “Nuclear war is more likely to start between India and Pakistan than anywhere else,” wrote the veteran foreign correspondent Eric Margolis in 2016.

Between disputed borders and lingering Muslim-versus-Hindu tension, the animosity runs deep. If it ever went nuclear, one authoritative study says the death toll in the first week would be 20 million… and the massive dust cloud spreading east would put another 2 billion at risk of starvation.

Khan made some fascinating post-election remarks, including this: “I’ve been a little upset that India’s media has portrayed me like a Bollywood villain. I’m the one Pakistani who is best known in India. I’m the Pakistani who believes these two countries have trade ties. The more we trade, the greater the benefit to both.” [Emphasis ours] 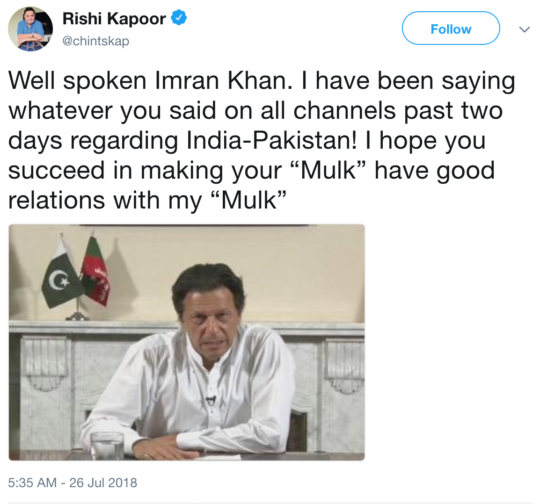 Now if only the “Russiagate” hysteria would calm down before it spirals out of control, putting the U.S. and Russian arsenals on an even tighter hair trigger than they are already…

The Commerce Department issued its first guess at second-quarter GDP this morning. The “expert consensus” was counting on a big 4.2% annualized increase. It rang in slightly lower at 4.1% — still the best reading since 2014. Certainly the president thought it was good enough to interrupt the morning chat shows and give a short speech taking credit.

The biggest drivers behind the number were consumer spending and exports.

We pause here for one of our occasional reminders that GDP is a meaningless statistical abstraction.

Still, politicians and central bankers think GDP is important, and God help us, they use it to make decisions that do affect your life and your job and your family. That’s why we pass it along this morning…

The Nasdaq — which took a hit yesterday when Facebook lost $179 billion in market cap, a single-company one-day record — is down another three-quarters of a percent today.

That’s despite standout performance from another one of the FANG stocks. Amazon delivered killer numbers after the closing bell yesterday. Its AWS cloud-computing platform is turning into a huge profit center helping finance its cash-burning efforts to dominate all of retail.

Hmmm… For years, the bear case against Amazon — aside from a nosebleed valuation that sits at 232 times earnings this morning — has centered on AWS. To borrow Warren Buffett’s famous metaphor, Amazon has no “moat” in cloud computing. Anyone can buy a buncha servers on which your business can store data for a monthly fee. A savvy competitor could vaporize that profit stream in short order.

But for the moment, that savvy competitor hasn’t materialized… AWS remains a cash machine… and AMZN shares are up nearly 2% on the day.

Among the major U.S. stock indexes, the small-cap Russell 2000 is taking the biggest hit today… and for our Mike Burnick, that’s cause for concern.

“The Russell has led the way for stocks for some time now, up 10% year to date, and outperforming the big-cap Dow by 8-to-1 in the process.”

But look at the Russell on a chart… 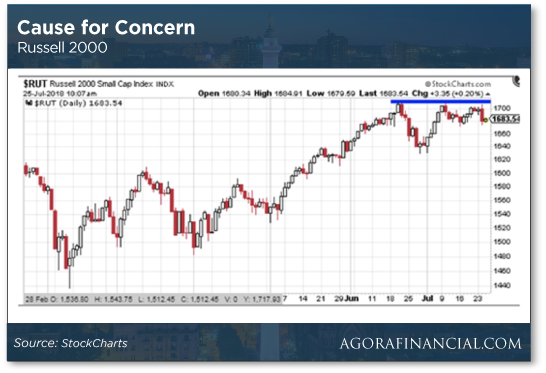 “Notice,” says Mike, “how the Russell has ‘bumped its head’ three times at overhead resistance and failed to break on through to the other side.

“In this case, three times is NOT a charm. It could spell big trouble ahead for the overall market. I say could because a few trading days does not a trend make… or a reversal of trend in this case.

“Still, there’s ample reason for caution with everything else that’s going on: trade war escalating, Fed raising interest rates, growing inflation… especially from all the import tariffs that will wind up costing American consumers and businesses.

“You name it, there’s a long and growing list of: Things that could go wrong!”

No, it’s not time to sell everything, Mike says. But there’s a high likelihood of turbulence ahead. We’ll keep you posted.

Bitcoin traders are shrugging off the news that the feds have once again nixed plans for a bitcoin ETF.

The Winklevoss twins — still most famous for suing Mark Zuckerberg over the origins of Facebook — have now tried and failed twice to win approval from the Securities and Exchange Commission. This time around, the SEC said the security underlying the ETF — that is, bitcoin — is too vulnerable to manipulation.

(What? That didn’t stop the SEC from approving ETFs for oil and gold earlier in this century. But we digress…)

From the “Yeah, That’ll Solve Everything” file, the Venezuelan government will lop five zeros off the bolívar.

As mentioned here earlier this week, inflation in Venezuela is on track to reach 1 million percent by year-end. Originally the plan was to remove three zeros, but now it’s five.

“The monetary reconversion will start on Aug. 20,” President Nicolas Maduro said in a TV address, doing a little show-and-tell with the new currency… 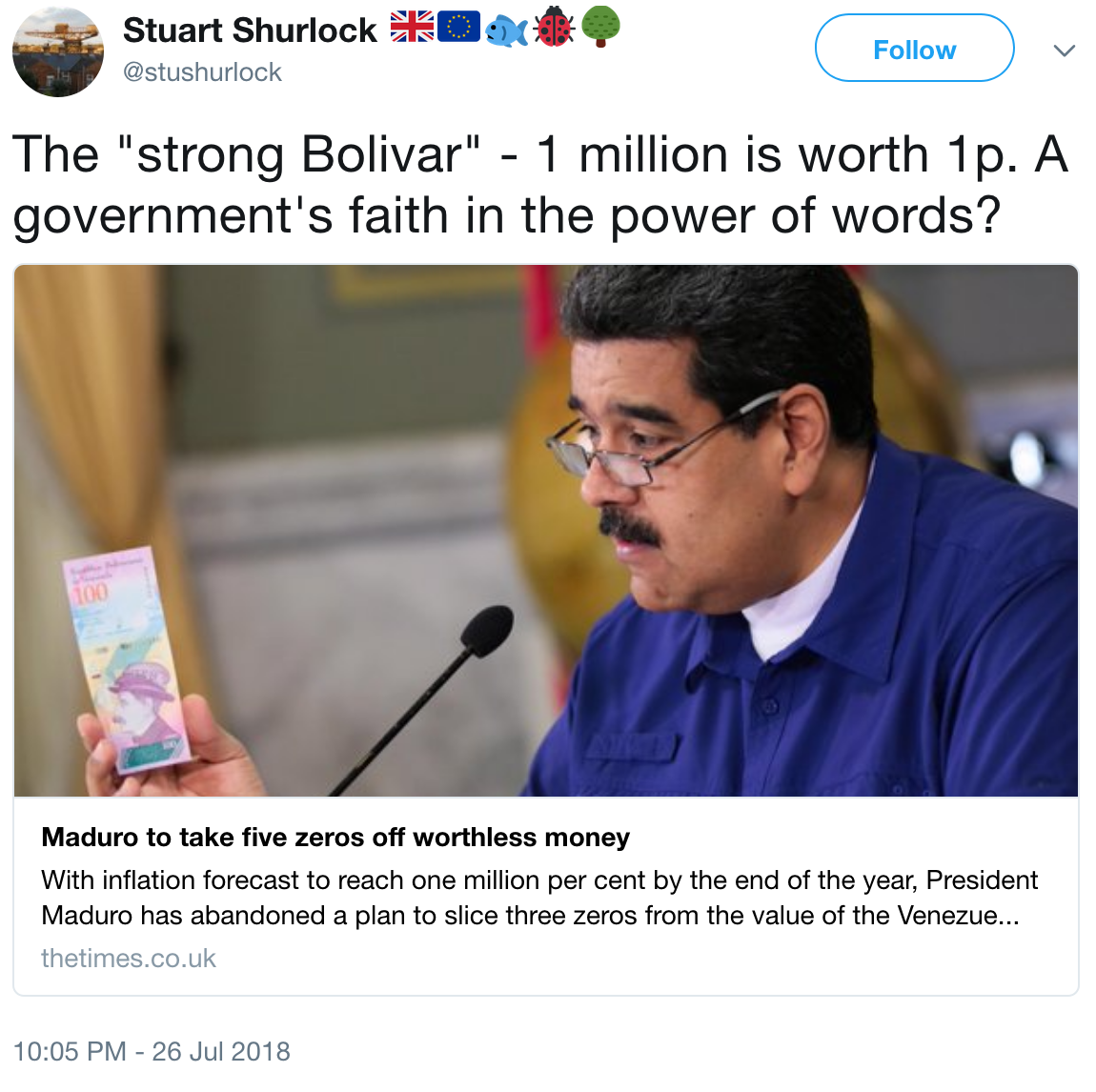 Supposedly the new-and-not-improved bolívar would be more closely tied to a state-backed cryptocurrency called the petro, launched in February. How, Maduro did not say.

“Regarding how you can catch more flies with honey than with vinegar,” a reader responds to another reader on the topic of Iran…

“Obama tried that and gave away the farm, and what did we get for it? Obama didn’t even encourage the Green Revolution a few years back.

“The only thing despots respect is strength. I believe Teddy Roosevelt’s motto: Speak softly but carry a big stick!”

The 5: We don’t get why some people become so upset by the one good thing Obama did.

What “farm” did he give away? (And the British, French, Germans, Russians and Chinese? They too signed onto the deal.) As we said Wednesday, Iran’s nuclear program is now the most thoroughly inspected program in the history of humans splitting atoms.

By taking the “Iran nuclear threat” off the table, the so-called JCPOA slashed the risk of a devastating Middle East war. It eliminated an excuse for leaders in Saudi Arabia and Israel to rattle their sabers.

By the way, the Green Revolution people were no more prepared to give up Iran’s nuclear energy program than the ayatollahs. It’s a source of national pride. It’s also a key to energy security; Iran still burns oil for a meaningful amount of its electricity and its oil reserves might not be as big as advertised.

And why in the world do you think American politicians should be encouraging uprisings in other countries? Even if you think such “meddling” — to use a word currently in vogue — is justified, it’s strategically stupid in this instance: An American endorsement would be the kiss of death to any opposition movement in Iran. It would destroy any street cred that movement has. Is that what you really want?

“Dave, I know you get nitpicked over promotions,” writes our final correspondent, “so in response to that…

“For my money Jim Rickards and associates (Nomi and Byron) are invaluable. For half the promotional rate of Barron’s, Rickards provides a monthly specific investment recommendation and a monthly podcast on a timely macro topic such as Trump administration’s trade policy or Fed monetary policy.

“Jim doesn’t just give recommendations but explains why he is recommending a position. If you want to be a better investor, I highly recommend his Strategic Intelligence.”

The 5: Thanks for the good word.

P.S. Speaking of Jim… we couldn’t help but chuckle at some recent headlines in the establishment financial media.

Basically, they got everything backward when it comes to the latest developments in the trade wars and currency wars.

We’ll unpack the reality of things next week.