“Institutional investors and corporate insiders didn’t run for the hills like retail investors did when stocks tumbled in early February into March,” said our income expert Zach Scheidt in late May. “In fact, they added to their positions.

What’s the difference between Wall Street and Main Street investors? It all comes down to sentiment.

“Wall Street was able to keep their emotions in check during the ups and downs in order to make consistently profitable decisions,” Zach says.

Apropos of ups and downs, take a look at the S&P 500 since the beginning of the year: 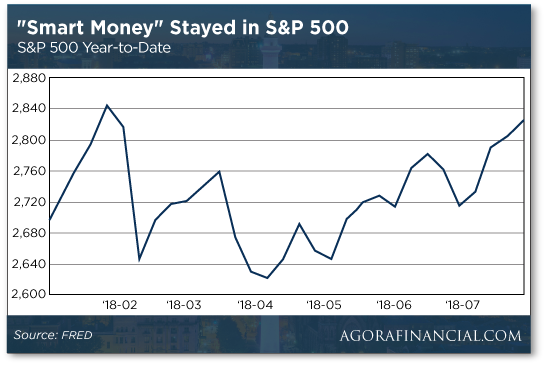 While keeping a lid on emotions is easier said than done, Zach says, “if you really are a long-term investor, you should… buy high-quality stocks while others are fearful.”

Zach points out a few of his favorites he recommended buying at a discount:

Today, these companies sit at $189.82, $37.21 and $37.84 respectively; we’ll see if Apple’s shares get even more of a boost when the company releases earnings today after the closing bell.

“After years of being some of the most overlooked stocks on Wall Street,” Zach says, “consumer staples stocks are now showing up in headlines.”

“Because these companies have very steady businesses, investors haven’t been interested in owning shares… After all, you’re not going to double your money in a year with one of these stocks. (At least, that’s the prevailing wisdom),” Zach says.

“That’s one of the main reasons shares of consumer staples companies like our Procter & Gamble (PG) income play have pulled back.

“Fortunately, the steady income payments we’ve received from PG have more than offset the pullback in the stock price.” [PG delivered an earnings “beat” this morning — it’s up half a percent on the day.]

“Another great area for dividend stocks that has been overlooked is the utility sector,” Zach continues.

“The same forces that are helping to push consumer staples stocks higher are also propelling the stocks of stable utility companies.

“In other words, investors are looking for safe places to earn income, and utility stocks offer the perfect advantages.

“If you’re interested in investing in a wide assortment of utility opportunities, the Utilities Select Sector ETF (XLU) is a good place to start,” Zach says. “This fund currently pays a 3.4% yield, and it’s a great way to profit from the rebound in this sector.

“Now, I know what you’re thinking,” says Zach, “What if those stocks continue to trade lower and then you are left with quick losses?”

In that case, remember Zach’s all about income investing — stocks he recommends yield generous, reliable dividends.

In the case of Procter & Gamble, “That’s the beauty of income investing. We still get paid real cash, which is ours to keep regardless of what stock prices do.

“So if your position does initially fall,” he says, “you’ll still be collecting dividend checks from these solid companies that I’ve made sure could continue to make these payments even if the economy falls on hard times.”

Zach says: “Do yourself a favor and keep some cash on the sidelines to quickly take advantage of any market dips in the near future.”

[Ed. note: Looking for a way into instant-profit plays that’s different from the traditional buy-and-hold strategy? Zach’s publisher has just reopened access to one of our most unique services.

It’s based on a one-of-a-kind tool Zach discovered during his hedge fund days… and it has the potential to beef up your bank account by as much as five figures in only a week. And that’s just with run-of-the-mill stocks — no options or anything exotic.

His next trade recommendation comes out tomorrow. For that reason, access will be cut off tonight at midnight. Click here to learn more about this powerful tool.]

To the markets, where the Nasdaq’s bouncing back from yesterday’s tech losses….

Personal income rose 0.4% in June, and so did consumer spending, according to the Commerce Department.

“Core PCE” — the Federal Reserve’s preferred inflation measure — pulled back slightly from the Fed’s 2% target to 1.95%.

As it happens, Fed officials start a two-day meeting today… but it’s essentially a nonevent. The next “big” meeting is in mid-September, when it will likely raise the fed funds rate again.

It’s a sellers’ market across the country.

Surprising no one — according to the Case-Shiller index — the cost of housing has grown 6.5% year over year, with some West Coast markets seeing double-digit increases.

So where’s some of the most expensive real estate in the U.S.?

“Seattle, Las Vegas and San Francisco increased the most with annual home price gains of 13.6%, 12.6% and 10.9% respectively,” says HousingWire.

“The next frontier for pot sales could be a very unexpected place… the Middle East!” says our pot stock authority Ray Blanco.

“Last week, authorities in Lebanon announced that they will soon review legislation to legalize medical marijuana.”

With its legalization, Lebanon would become the first Arab nation to permit the use of medical cannabis.

The driving force behind legal marijuana? Of course, revenue.

For a country with a population equivalent to the state of Maryland’s, “legal pot could become a billion-dollar business.

“Lebanon is likely the member of the Arab League to see legalization first,” says Ray. “We’ll see what happens with Lebanon’s pro-pot legislation when it reaches their parliament.

“In the meantime,” he says, “the possibility of investment opportunities in frontier markets like Lebanon is attractive.

“And it’s worth noting that several of our Canadian pot plays already have exposure to overseas markets where medical pot is only starting to find a legal framework.”

“Cryptocurrency markets traded up slightly over the past week following speculation that approval of a bitcoin ETF may be imminent,” says our crypto maven James Altucher.

Even though “prices fell… Thursday by roughly 3.6%, to $7,848, after the SEC rejected a separate proposal for the Winklevoss Bitcoin Trust.”

We mentioned the SEC’s smackdown of the Winklevii foray into crypto last week….

“In a 92-page filing detailing the decision,” James says, “the agency cited difficulties with protecting public interest, and the possibility that bitcoin market… might be susceptible to manipulation.”

Another reason the “SEC cited for rejecting the Winklevoss ETF is its concern that it would cause unsophisticated investors to speculate on the price of cryptocurrencies,” says James.

On the other hand, “the Securities and Exchange Commission (SEC) is preparing to approve the CBOE’s VanEck/SolidX bitcoin ETF sometime in August.”

The proposed ETF might pass muster with the SEC since — at $200,000 per share — it’ll be primarily accessible to institutional investors.

“An approval decision on the VanEck/SolidX could come as early as this month,” James says. “If the proposal passes, bitcoin prices could still go up further from here.

“Given the tremendous promise of digital currencies,” he continues, “and the forthcoming decisions related to new bitcoin ETFs, I maintain that cryptocurrencies (such as bitcoin and ethereum) remain undervalued for the time being.”

In a story picked up by the Chinese press: “An Iranian trade official said that Tehran is looking for potential solutions to maintain trade with Africa by bartering oil products for gold,” says an article at New China.

“Hassan Khosrowjerdi, the president of Iran-Africa Council for Economic Cooperation, said that with the U.S. sanctions in prospect, banking problems would be Iran’s biggest challenge for trading with other countries.”

The solution as Iran sees it? End-run U.S. sanctions by trading Iranian oil for African gold… and doesn’t that just jibe with Jim Rickards’ “Axis of Gold”?

While Khosrowjerdi didn’t name a specific African trade partner, Ghana is second only to South Africa when it comes to exporting gold. And Iran already exports a “wide range of oil products to Ghana including tar and various kinds of industrial oil.”

The article concludes: Iran “has intensified its purchases of the precious metal over the past few years.”

Last Christmas, I gave you my… stock portfolio?

“The portfolio that West chose for his wife,” according to CNBC, “outperformed the S&P 500 by more than 40%… 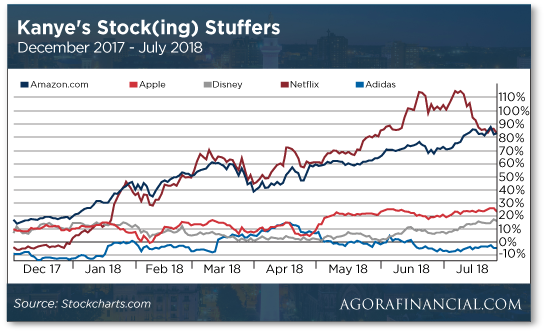 “If the celebrity held on to her positions, she could be seeing massive gains.”

Let’s take a look at the biggest winners among Kanye’s picks… and they’re all in the green:

Do we think Kanye’s a stock-market sybil? Nah.

What’s not to get about shopping, Mickey Mouse and sneakers?

To learn more about this tool — so powerful it was once investigated by the SEC — click here now.