After Alex Jones, Are We Next?

“I am living in the America I always feared,” writes Peter Van Buren.

Mr. Van Buren spent close to a quarter-century as a U.S. diplomat. Then he became a whistleblower. His 2011 book We Meant Well is a tragicomic firsthand account of Washington’s ham-fisted attempts at “nation building” in Iraq.

Over the weekend, Van Buren got into a dust-up on Twitter with a few mainstream journalism types.

He said back when he was working for the State Department, it was his job to lie to reporters… and all too often, reporters regurgitated those lies uncritically. (Is there any doubt? That’s more or less how the Iraq war got started, after all.)

Among the people who took offense was a New York Times contributor named Jonathan Katz. 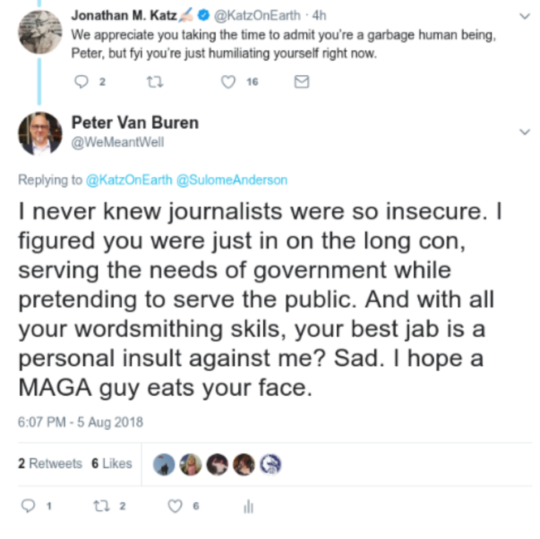 An intemperate reaction? No doubt. But worthy of a permanent suspension from Twitter? Apparently.

Katz tattled to Twitter. “After two days of silence,” Van Buren writes on his blog, “Twitter sent me an auto-response saying what I wrote ‘harasses, intimidates or uses fear to silence someone else’s voice.’”

Seven years of Van Buren’s tweets, down the memory hole. “I lost my career at the State Department because I spoke out as a whistleblower against the Iraq War. I’ve now been silenced, again, for speaking, this time by a corporation.” That’s the America he says he’s always feared.

[Bonus points: Our acquaintance Scott Horton — radio and podcast host and now editorial director of the venerable Antiwar.com website — called Katz a “boo hoo little bitch” on Twitter and had his own account suspended.

Temporarily, in his case — but Scott says it’s incentive for him to give up Twitter, which he’d been thinking about anyway. “It’s a worse cesspool of whining about bull**** than it’s always been, and I have wasted way too much time on it.”]

Ironically, Twitter is not suspending Alex Jones, the face of InfoWars.

As you’ve surely heard by now, Jones was “deplatformed” Monday by Facebook, YouTube, Apple and Spotify on the grounds of “hate speech.” (All at once? How can that possibly be a coincidence?)

“He hasn’t violated our rules,” says Twitter CEO Jack Dorsey. “We’ll enforce if he does.”

As the Jones and Van Buren stories have unfolded this week, we’ve run across many people quick to remind us that only governments can commit censorship. Facebook, Twitter and so on are private companies entitled to decide who gets to play in their sandbox.

Which is true, as far as it goes…

The problem is the politicians — beginning with Sen. Chris Murphy (D-Connecticut). 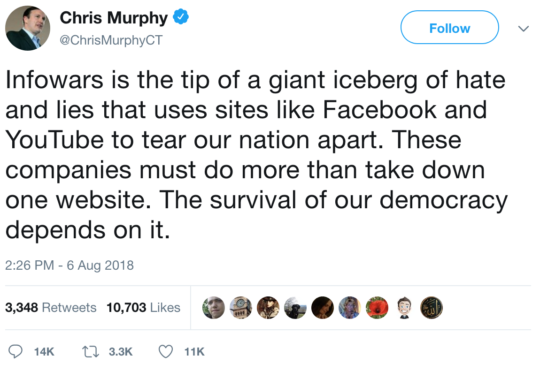 As our favorite political reporter Michael Tracey remarks, “Have you noticed that every time there’s a ‘backlash’ against tech companies — usually generated by Congress and prestige media — it only ever results in the companies arrogating more powers to themselves? Such as the power to determine what political content is permissible?”

That’s not an accident. That’s the whole idea. “Washington sees in Silicon Valley a chance to control speech in a way never before possible under the First Amendment,” writes Reason’s Zach Weissmueller, “and to roll back the clock to a pre-internet age of media gatekeepers.

“The way to achieve this is by continually leveraging the threat of regulation.”

Rolling Stone’s Matt Taibbi: “As was obvious during the Senate hearing with [Facebook CEO] Mark Zuckerberg earlier this year, politicians are more interested in using than curtailing the power of these companies. The platforms, for their part, will cave rather than be regulated.”

Haul a tech exec before Congress, give him the third degree for a day, watch him fold like a lawn chair a few weeks or months later. Lather, rinse, repeat.

As Weissmuller suggests, the endgame is a 21st-century version of the “good old days” when three TV networks, taking their cue from The New York Times, set the boundaries for acceptable discourse.

Those boundaries are slender, indeed — the equivalent of the 40-yard lines on a football field. In this new/old world, anything to the left of Hillary Clinton or the right of Jeb Bush gets the ban hammer.

And no, it’s not just conservatives and libertarians in the cross hairs. When Google adjusted its algorithms last year to crack down on “fake news,” search traffic to progressive sources like AlterNet and Democracy Now! started cratering.

Meanwhile, a few days ago Facebook deleted a bunch of pages it thought were the work of those dastardly “Russian bots.” But one of them was a legit page posted by lefties trying to organize protest marches in Washington, D.C., and Charlottesville, Virginia.

It’s a cliché to say your commitment to free speech is tested when it’s your enemies whose expression is under threat… but that doesn’t make it any less true.

[Historical aside: Remember when the ACLU stood up for the right of neo-Nazis to march through the largely Jewish community of Skokie, Illinois?

Alas, that was so 1978: A few weeks ago, a leaked memo said going forward the ACLU would consider “the potential effect on marginalized communities” when deciding which free speech cases it would litigate.]

So why are we bringing all this up today? And why are we addressing it at such length?

In no small part, it’s out of self-interest…

From the earliest days of our trade, financial newsletter editors have trafficked in ideas outside the mainstream.

Nearly a century ago, Roger Babson warned the Roaring ’20s were destined to end in tears. (They did.) Nearly 50 years ago, Harry Browne urged readers to forget the “Nifty Fifty” stocks and pile into precious metals after President Nixon killed off the last vestiges of the gold standard. (Good advice then.) A quarter-century ago, James Dale Davidson warned about The Plague of the Black Debt. (It still plagues us.)

Across the decades, up to the present day, newsletter editors give voice to a nagging feeling people have in the back of their minds — that reality isn’t the way the mainstream gatekeepers portray it. We daresay financial newsletters were the pioneers of “alternative media.”

Here at The 5, we’ve brought our own snarky spin to the newsletter art these last 11 years — lobbing spitballs at central bankers, politicians and the allegedly best-and-brightest denizens of Wall Street.

We called out former Federal Reserve Chairman Ben Bernanke for perjury. We called out Warren Buffett for outrageous acts of crony capitalism. We called out House Speaker Paul Ryan as a phony years before it was fashionable. We called out JPMorgan Chase CEO Jamie Dimon for all-around douchebaggery.

For the longest time, we did this while flying under the radar. The newsletter biz was a niche thing with a limited audience.

No more. Over the last three or four years, our readership at Agora Financial has grown exponentially.

In large part, that’s because of a crazy-skilled marketing team who figured out how to reach a new universe of people who didn’t even know our industry existed. Our marketers found those people… using the ad platforms of Facebook and Google.

You can see how that might become a problem. Heh…

Already our sales messages receive virtual proctology exams by “compliance” teams at those and other firms — applying standards that are at times inconsistent and always subject to change.

Don’t get us wrong. We don’t particularly mind jumping through those hoops. As we’ve explained before, those sales messages are how we make the lion’s share of our revenue. That revenue is what gives our editors the freedom to speak their minds to you, the reader — free from the interference of advertisers or other outside influences.

But if the editorial content we publish — the stuff that’s not sales-y — becomes subject to Silicon Valley’s scrutiny, that’s where we become alarmed.

Granted, much of what we publish is limited to paying subscribers, especially the investment recommendations. But there’s a host of content we put online for free, exposing our work to people who might not come across it otherwise.

Some of it gets posted on Facebook and shows up prominently in Google’s search results. We haven’t given it a second thought… until now.

Maybe we should have given it thought sooner.

After all, twice in the last two years, our editors have shown up on blacklists smearing them as Russian stooges. One list was the product of an anonymous shadowy outfit that managed to vault itself to the front page of The Washington Post. The other list came from a Soros-funded think tank.

And consider this: When Facebook conducted the aforementioned purge of “Russian bot” pages — the one that ensnared the organizers of a protest march — it was assisted by the Atlantic Council, an outfit whose board includes several #Resistance types like former CIA directors Michael Hayden and Michael Morell.

“These people,” writes Matt Taibbi in Rolling Stone, “now have their hands on what is essentially a direct lever over nationwide news distribution. It’s hard to understate the potential mischief that lurks behind this union of internet platforms and would-be government censors.”

Don’t get the wrong idea. We’ll still be around, in one form or another, even if the establishment gets its way — co-opting Facebook, YouTube and the rest.

Edgy editors were getting their message out via newsletters back in those “good old days” when there was no internet… when the only news on TV came from CBS, NBC and ABC… and when the CIA was collaborating with leading news organizations — especially CBS, The New York Times and Time magazine.

[That last is not “fake news,” by the way. Carl Bernstein reported it in Rolling Stone in 1977.]

Our own distribution model has changed radically at least twice during my 11 years with Agora Financial. It will change again. Our marketing team might have to get more creative in figuring out how we can engage with readers… but figure it out they will.

Thanks for hearing us out today and indulging us a rare single-topic episode of The 5. We’re back to our regularly scheduled programming tomorrow.

P.S. No, there’s nothing happening in the markets today that can’t wait till tomorrow.

The stock market is still there. The powers that be are still keeping their thumb on the gold price. Tesla CEO Elon Musk is still a showboater.

P.P.S. Peter Van Buren has updated his blog post, the one we mentioned at the outset of today’s 5.