Housing is now its least affordable in 10 years. And that’s according to the National Association of Realtors, which has a vested interest in making a home purchase look like the most awesome thing you’ll ever do in life.

The NAR’s preliminary figures for June show the median-priced single-family home now costs $279,000. Taking out a mortgage now would mean a 4.74% rate. Principal and interest combined work out to a monthly payment of $1,164.

Using those figures, and a few others, the NAR compiles a housing affordability index. Lower numbers mean lower affordability. The current number — well, take a look… 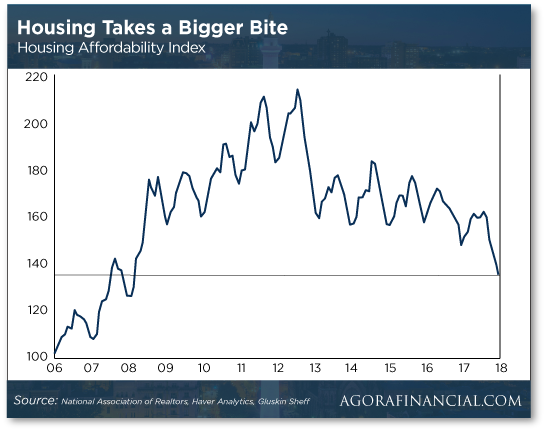 Yes, it was worse in the run-up to the Panic of 2008. But that’s not the point. The point is that the housing market has likely peaked for this economic cycle. A few select homebuilder stocks have rallied on earnings surprises in recent weeks… but the sector as a whole is down 20% from its highs in January.

Ditto for the next-biggest consumer purchase after a home — automobiles. The days of Detroit’s Big Three reporting ever-rising sales at the start of each month are over. Heck, General Motors decided in May to stop reporting monthly sales — breaking with a decades-long industry practice.

All year we’ve been saying the U.S. economy is in the late boom phase of the boom-bust cycle.

That doesn’t mean a recession or a bear market is imminent. But it’s not too early to start thinking about it.

The current “expansion” goes all the way back to June 2009. It’s the second longest in the post-World War II era. If it can last till July 2019, it will break the record. 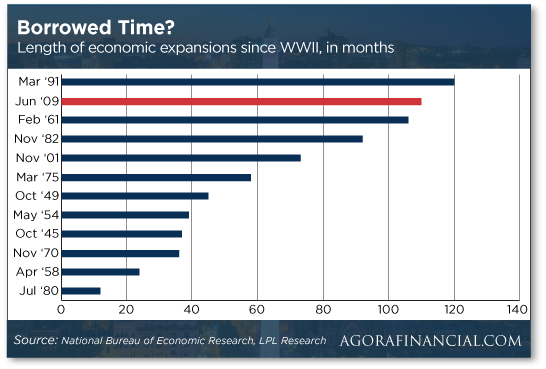 In other words, the economy might be on borrowed time — time the Federal Reserve doesn’t have.

“Extensive research,” says our macroeconomic maven Jim Rickards, “shows that it takes between 3–5 percentage points of interest rate cuts by the Fed to pull the U.S. economy out of a recession.”

At present, the fed funds rate is 2%. Going back to last December, the Fed has been raising this rate like clockwork every quarter. Assuming it can keep up that pace, the rate will be 3% by the time the current expansion sets a record a year from now.

If the economy rolls over at that time, slashing the fed funds rate back to zero might work. Or it might not.

Even if the Fed returned to “quantitative easing” — the type of money printing it pursued off and on between 2008–2014 — there’s no guarantee that would work either. Back then, it pumped up asset prices like crazy. The real economy? Not so much.

The Fed has barely started reducing its balance sheet after quintupling it to $4.5 billion during that 2008–2014 span. How big could they blow it up again on the next round? $5 trillion? $6 trillion?

“The Fed only has $40 billion in capital,” Jim reminds us. “With current assets of $4.4 billion, the Fed is leveraged 110-to-1. That’s enough leverage to make Bernie Madoff blush.

“In short, there’s a very high probability that the U.S. economy will go into recession before the Fed is prepared to get us out of it,” Jim warns.

Worse, by raising rates at such a steady pace in an effort to beat the clock, the Fed might trigger the very recession it’s preparing to fight.

How to prepare? Jim says it’ll pay to have a pile of cash to scoop up bargains in a bear market. And as always, make sure you have 10% of your portfolio in gold and silver as a crisis hedge.

[If you’re willing to take on a little more risk: Jim recently sat down for an interview about a strategy he’s kept close to the vest for 15 years. Play it right and it could be worth an extra $30,000 a month.

The interview is available to watch at this link through midnight tonight.]

The Turkey/emerging-markets freakout is over for now.

At last check, all the major U.S. stock indexes are solidly in the green — the Dow up nearly half a percent, the small-cap Russell 2000 up more than 1%.

The big earnings number of the day is Home Depot. HD delivered a sizeable “beat,” but the Street is not impressed, with HD shares slightly in the red.

Elsewhere, trader chatter is about the German multinational giant Bayer — which is stabilizing today after a 10% tumble yesterday.

As you might have heard, Bayer bought out Monsanto recently. On Friday, a jury in California awarded $289 million in a lawsuit brought by a landscaper who says Monsanto’s Roundup herbicide gave him cancer.

There are more lawsuits where that one came from. Was Bayer betting on a different outcome when it sealed the deal?

Heh… Reminds us of 20 years ago when Dick Cheney was running Halliburton and he swung a deal to acquire Dresser Industries. Halliburton also ended up acquiring a boatload of asbestos litigation. After Cheney sauntered off to the White House in 2001, the impact hit full blast and HAL shares collapsed 80% in nine months.

At least Cheney had the excuse that he was a politician and not a businessman. What’s Bayer CEO Werner Baumann’s excuse?

From the Department of Missing the Point… 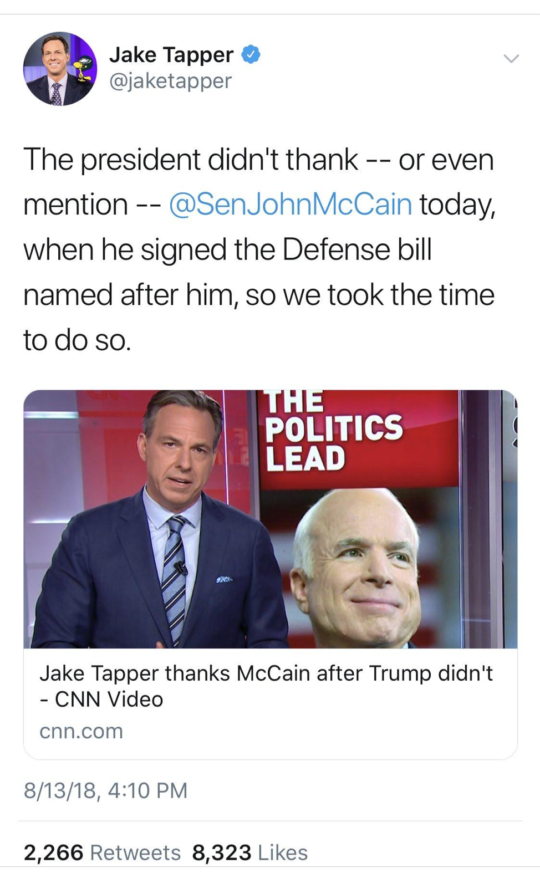 It wasn’t just CNN yesterday. It was everyone thinking the story was Donald Trump “snubbing” a dying John McCain — not that Congress passed, with overwhelming bipartisan support, a $717 billion military spending measure even bigger than Trump’s initial request.

There was never any doubt Trump would sign it. Nonetheless, shares of ITA, the big defense and aerospace ETF, are up more than 1% from when Trump signed the bill 24 hours ago.

The National Federation of Independent Business is out with its monthly Small Business Optimism Index. It clocks in at 107.9.

That’s the second-highest figure in the index’s history — exceeded only by July 1983, when Return of the Jedi was tops at the box office and The Police saturated the radio waves with “Every Breath You Take.” (Sorry if we put it in your head the rest of the day.)

Within the survey, a record 23% of respondents say they plan to create new positions. That said, 37% said they had job openings they can’t fill.

It’s the cheapest gasoline in the world — for one dollar, you can fill a midsized sedan 720 times. But not for long.

We return today to the economic basket case of Venezuela — where two decades of socialist mismanagement have triggered inflation that’s on track to reach 1 million percent by year-end.

But as in many oil-producing countries, gasoline is subsidized in hopes of buying off the masses. So while a cup of coffee costs 2 million bolivars, a gallon of gasoline runs less than 4 bolivars.

No surprise, “Smuggling the subsidized fuel from Venezuela into neighboring countries, where prices are much higher, is big business,” reports the BBC.

Thus, the hapless President Nicolás Maduro just announced: “Gasoline must be sold at an international price to stop smuggling to Colombia and the Caribbean.”

Not everyone will be hit with price increases, though. Venezuelans who hold a “Fatherland ID” will continue to get subsidies for another two years. Thus the burden of the higher prices will fall on Maduro’s opponents — many of whom have refused to get the government-issued ID cards. Diabolical…

“Your issue on why the price of gold doesn’t matter is completely disingenuous,” a reader writes, getting today’s mailbag off to a rousing start.

“Mr. Rickards took quite the victory lap at the end of 2017 when gold hit his $1,300 forecast. Now that his 2018 forecast has exactly zero chance of coming true (and will miss by 20% or 30%), he states price doesn’t matter because gold is money. How convenient. If I said, ‘Don’t worry about the price of Google stock, just keep buying and worry about how many shares you own,’ I would be laughed at and rightfully so.

“Agora makes a lot of money pushing metal and metal stocks. That advice has been wrong since 2011. How do you think subscribers who purchased high-priced mining newsletters feel that you now are agnostic about the price of gold? Your argument about gold being insurance may be true, but that is not how you market it. I’ve yet to see you push a $3,000 newsletter to ‘get rich buying junior miners because gold is money even as it goes down.’

“I thought I was smart buying silver at $24 after it crashed from $48. I was clearly wrong about my metal purchases (and mining stocks) and was wrong for five years as I continued to buy. I would hope that it is time for you guys to reflect on this awful advice that you keep pushing.

“I personally feel that investing today is like an episode of The Twilight Zone, but that doesn’t change how wrong I was. Nor do you guys get a pass on talking out of both sides of your mouth when you’ve been completely wrong. Gold isn’t working and there is nothing to indicate it ever will considering what’s happened since the crisis.”

The 5: We’re not going to dodge the underperformance of the precious metals here. And chalking it up to manipulation is cold comfort, of course.

That said, too many people in years gone by went “all-in” on precious metals — and likely did so near the top of the market in 2011. That’s how it goes when any asset approaches the mania stage.

From the time Jim came aboard Agora Financial in 2014, he’s said a sensible allocation for gold is 10% of your investable assets.

He’s not the only one. Longtime friend of The 5 Frank Holmes, from the U.S. Global mutual fund family, recommends a 10% allocation as well — only in his case it’s 5% in the metal and 5% in mining stocks.

Meanwhile, a junior mining stock should never represent more than a tiny percentage of your overall holdings.

If you’re doing serious buy-and-hold investing… playing for a long-term goal like retirement in 20 years… and if your conviction level in an asset is strong enough… then yes, all that matters is how many shares (or ounces or crypto units or whatever) you own at the end of that span. The downdrafts in price are statistical noise in that context.

P.S. What Jim Rickards talks about in this interview is not long-term.

The strategy he describes — he had to hold his tongue about it for 15 years, for reasons you’ll see when you click — has the potential to deliver thousands of dollars every two weeks.

Here’s the link where you can watch. The link will stay live through midnight tonight.