“You Just Said WHO Is Buying WHAT?!”

One of the world’s leading asset managers is about to make a huge long-term bet on China.

From this morning’s Financial Times: “The Canada Pension Plan Investment Board plans to more than double the proportion of assets it allocates to China in the next seven years as one of the world’s biggest pension schemes looks to tap fast-growing emerging markets for greater returns.”

At present, the $280 billion-strong Canada Pension Plan has 7.6% of its portfolio invested in China. By 2025, the plan is to raise that allocation to 20%. Another 10% will be devoted to other emerging markets — presumably including the other “BRICS” nations of Brazil, Russia, India and South Africa.

If you’ve been keeping up with The 5 this summer, the move probably seems nuts. Are those Canucks getting an early start on their legal recreational cannabis? (Sales become legal there Oct. 17.)

Emerging markets in general have been getting slammed by a strong dollar — because many EM companies issued bonds denominated in dollars.

And China in particular is trying to fend off a trade war with the United States — even to the point of deliberately tanking the country’s stock market, as we showed last week.

So what are the managers at the Canada Pension Plan thinking?

If you’re a longer-term reader, you might recall we started singing the praises of the Canada Pension Plan three years ago — or as we dubbed it “Canadian Social Security.”

The CPP is everything Social Security is not. It’s professionally managed. It runs a surplus. Its reserves are set to quadruple by 2040.

By investing in businesses large and small around the world, the CPP’s managers have generated an average annual return of 8% over the last 10 years — a period that still includes the Panic of 2008. Looking at just the last five years, that performance improves to 12.3%.

So they’re no fools. What is it they see in emerging markets?

The short answer: At a time U.S. markets are again flirting with all-time highs, emerging markets are bargain-priced — dirt-cheap, really.

“How cheap? As a group, emerging markets trade at a 55% discount to the U.S.,” writes our Jonas Elmerraji in the current issue of The Seven Figure Formula.

Indeed, they’re the cheapest in the last 35 years.

The following chart is a little involved, but it illustrates the point well. It covers 3½ decades of market history — showing the “cyclically adjusted” price-earnings ratios of the U.S. stock market on the left… other developed countries in the middle… and emerging markets on the right: 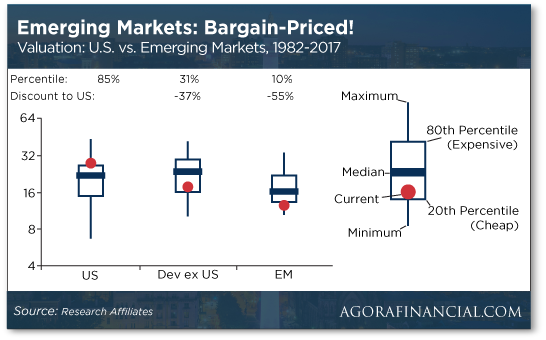 “In order for emerging-market stocks to catch up to the valuations found here in the U.S., they’d need to rally 222% from current levels. That’s an astounding gap — and it leaves plenty of opportunity to be wrong about the magnitude of the move and still make a lot of money.

“How could investors be missing the huge discount in them?”

“It’s because, as it turns out, these countries still make up a relatively small share of global assets,” Jonas explains.

“At the end of 2017, emerging-market stocks made up just 6.7% of all assets in exchange-traded funds (ETFs), the most popular way to gain exposure to overseas stocks.” Investors have poured $3.3 trillion into ETF assets. Of that total, EMs make up a mere $231 billion.

“They’re not on Wall Street’s radar,” says Jonas. “At least not in a meaningful way.

“This total lack of attention on emerging markets is providing us with a major opportunity to buy a cheap, under-owned asset before mainstream investors catch wind of it.”

What’s more, the fact 2018’s been a bad year for EMs is a good thing going forward, says Jonas: “Emerging markets have a history of posting impressive, double-digit rallies after big sell-offs like the one we just witnessed earlier this year. The timing for a resurging emerging-market investment couldn’t be better.”

The easy way to play it is EEM, the giant emerging-markets ETF. But Jonas has an idea he says is better — with handsome dividends and sizeable exposure to four of the seven most undervalued EMs.

Access to this recommendation is limited to paying Seven Figure Formula customers. To join their ranks and learn more about Jonas’ “formula” for massive gains, just follow this link.

“The test-and-reject of the S&P 500 swing lows last week shows SUPER stock strength,” observes Alan Knuckman from his perch in the Chicago options pits. “And we could be just one trading day away from a new top.

“When we do set new S&P highs, the breakout will target a larger objective of 3,200 on a full ‘V’ recovery from the January peak. That’s a lucky 13% above its current level.”

Gold is holding onto some startling late-day gains from Friday — the bid up to $1,186.

We call the rally “startling” because it happened after the Comex closed for the weekend at 1:30 p.m. EDT. But electronic trading continued through 5:15 p.m., and during that period the price jumped about $10 from the 19-month lows notched earlier in the day.

The rally is affirmation of Jim Rickards’ thesis that the International Monetary Fund and the Chinese central bank are manipulating gold priced in SDRs — the IMF’s “super currency” used by governments and central banks.

As we mentioned on Friday, gold has traded in a tight range of 850–950 SDRs for nearly two years. Sure enough, it bounced off 850 right around the time we hit the “send” button on that episode of The 5.

Verizon is about to start making that offer in a few select cities — in exchange for signing on to 5G wireless service.

“It sounds like it could be a really good deal,” writes our Ray Blanco, putting on his high-tech hat today. “Drop your broadband internet provider as well as your satellite or cable, and get a 5G wireless setup at home instead. Verizon wants to offer either YouTube TV or Apple TV to upcoming 5G customers.”

Existing 4G service isn’t speedy enough to replace a wired broadband connection, much less traditional cable TV. But 5G? That’s “fast enough for you to watch TV in the living room while someone plays video games in the den,” says Ray.

What’s more, “5G will be cheaper than upgrading our wired internet infrastructure. Running new fiber lines to every home in the country is incredibly expensive.

“Building out 5G infrastructure isn’t cheap, either, but it will be much less expensive than that alternative since the final leg in the network — your home — won’t need brand-new cabling for a performance upgrade.”

For now, Verizon’s rollout is limited to Los Angeles, Sacramento, Houston and Charlotte. But that’s just the beginning.

How to play it? As we noted earlier this month, Ray is more impressed with the 5G rollout of AT&T. He also thinks Broadcom could make inroads with 5G chips, while Samsung is well-positioned to lead the way in 5G handsets and other devices.

If cannabis’ progress as an asset class is a case of two steps forward, one step back… well, count this as one step back.

Wells Fargo has closed the bank account of a candidate for statewide office in Florida — because she’s taking donations from players in the cannabis industry. 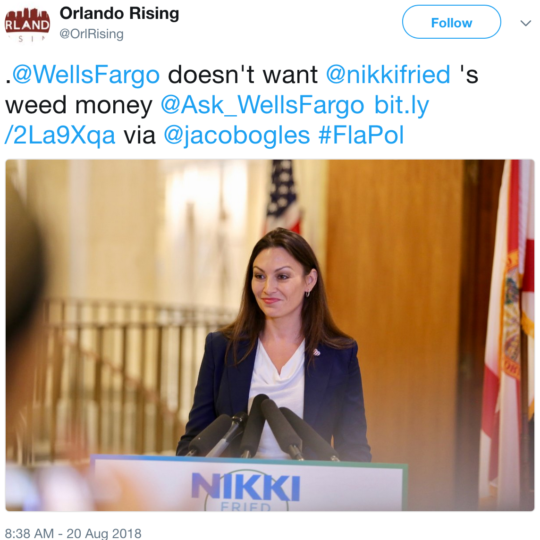 Attorney Nikki Fried is seeking the Democrats’ nomination for Florida agriculture commissioner. According to emails her campaign released today, Wells Fargo fired her as a client earlier this month because she’s received campaign donations from “lobbyists from the medical marijuana industry.”

The critical background from Tom Angell writing at Forbes: “Because of ongoing federal marijuana prohibition, many banks have remained wary about working with marijuana businesses, even as a growing number of states move to legalize the drug for recreational or medical purposes.

“But Wells Fargo’s move appears to be the first time a financial institution has denied banking services to a candidate for public office as a result of donations from the cannabis industry.”

No telling yet if this is a one-off that’s the work of ultra-cautious compliance officers, or if it’s a new company policy. Either way, it’s likely to spur legislation in Washington to clear up the ambiguity about canna-businesses’ access to banks.

To the mailbag: “While I do not disagree with your discourse on gold valuation, especially since I bought my coins at much lower prices than now, I must say that gold mining stocks have been a lousy investment for nearly 40 years, in two ways.

“First, virtually all of them have declined in share value, and secondly, the capital I used to buy them could have been better invested almost anywhere else.

“This would be palatable if I had only myself to blame for picking these stocks. But had gold not been suppressed by the central banksters, I could be holding a fat portfolio of mining shares. ‘Sour gold’? You bet!”

The 5: Well, yes. But too often, gold mining executives are their own worst enemy.

For every Ross McEwen (the guy who built Goldcorp out of next to nothing)… or Keith Barron (the one who found the epic Fruta del Norte deposit in Ecuador, propelling shares of Aurelian Resources 9,000% in the early 2000s)… there are 10 or 20 guys who wash out for the stupidest reasons.

If they’re a big company, they overpay for acquisitions — i.e., Kinross’ takeover of Red Back in 2010. If they’re a little company, they make future plans on the assumption of ever-rising gold prices — i.e., the majority of juniors going into the 2011 top.

In the present environment, companies have no choice to but to deploy their capital more wisely. But even in the best of times, you have to choose wisely.

The lowest-risk way to invest in the sector until the gold price takes off again is the royalty companies like Franco-Nevada (FNV) or Wheaton Precious Metals (WPM). They don’t have costs to worry about — they offload all that risk onto others and collect the checks. Not a bad way to be…

P.S. A wealthy retirement could be yours in as few as two simple steps: 1) Make a short phone call. 2) Type a few instructions into your brokerage account.

Sound too good to be true? Judge for yourself — we bet you’ll be shocked how easy it could be.