One Nation. Under Stress. In Debt. (Still)…

Ten years ago today, the national debt stood at $9.62 trillion. As of last Friday — the most recent figure available from the Treasury Department — the total was $21.41 trillion.

Ten years ago tonight, thousands of moviegoers nationwide settled in for the premiere of a documentary called I.O.U.S.A. — calling attention, first and foremost, to the dangers posed by that debt.

Really, it tackled debt and deficit on four levels — the budget deficit, yes, but also a savings deficit, the trade deficit and a deficit in leadership to confront the other deficits. 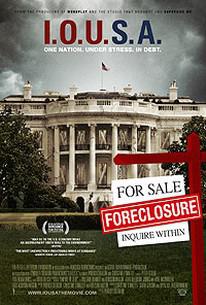 The late Roger Ebert was among the critics who viewed it favorably. He wrote his review in the form of a letter to his three grandchildren: “I see you growing up into such beautiful people, and I wish all good things to you as you make the leap into adulthood. But I have just seen a documentary titled I.O.U.S.A. that snapped into sharp focus why your lives may not be as pleasant as ours have been.”

I.O.U.S.A. was the brainchild of Addison Wiggin — executive publisher here at Agora Financial and founder of The 5 Min. Forecast.

To help sound his warning, he interviewed more than a dozen people with something worthwhile to say. Some of them were iconoclasts like Rep. Ron Paul (R-Texas). Many were Establishment figures like Warren Buffett and Robert Rubin. (More about Rubin shortly.)

Ten years after the warning went up, we’re compelled to make an observation… and pose a question.

The observation is best captured on this chart: If anything, it looks as if the trajectory of the national debt began accelerating around the time of the film’s release… 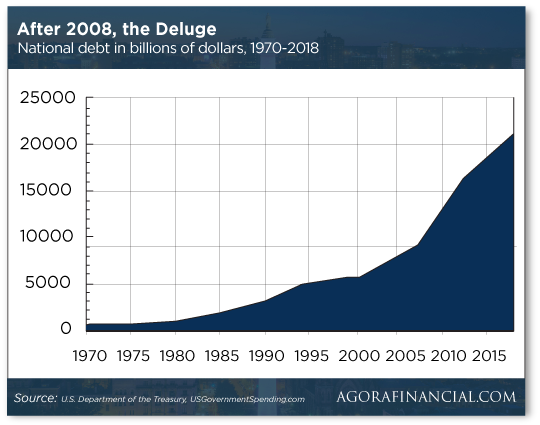 That’s because we’re less than a month out from another 10th anniversary — the collapse of Lehman Bros. on Sept. 15, 2008, along with a host of other events that brought the Panic of 2008 to critical mass.

The question is one that follows logically from the observation: Were Addison and Co. crying wolf?

After all, the Panic of 2008 had a long list of causes, not all of them having to do with Uncle Sam’s spiraling debt. Here we are 10 years later and the national debt has more than doubled. But life as we know it has marched on. Catastrophe hasn’t befallen us.

To start with, we’ll point out that debt overhang is one of the reasons the “recovery” from the Panic of 2008 has been so anemic. Every new dollar of government debt is a dollar that can’t be put to work in the private economy. That translates to everyday Americans carrying their own debt burden that prevents them from salting away the savings that fuel future economic growth.

We recognize that doesn’t directly address the impending-catastrophe question. So here goes…

The same question — more or less — was recently posed to the aforementioned Robert Rubin.

Rubin, we realize, is as Establishment as they come. Not only was he Bill Clinton’s Treasury secretary, but he’s ex-Goldman Sachs, ex-Citigroup and ex-chairman of the Council on Foreign Relations. Perhaps more than anyone else, Rubin is responsible for the “financialized” economy that’s extracted wealth from all of us for a quarter-century.

But on the subject of debt and deficits, the guy’s solid.

From a recent column he penned in The Washington Post: “At a panel I recently moderated in New York about our country’s unsustainable fiscal outlook, someone asked a simple question: So what? Nothing bad has happened despite immense fiscal deterioration — our debt-to-GDP ratio has more than doubled in less than 20 years, from 33% in 2000 to 78% today, and is on course to reach nearly 100%t in 10 years and continue rising — so why worry now?

“Adverse effects have not been felt for a long time, masking our fiscal reality and reducing pressure to act.

“But while the ‘when’ is uncertain, the ‘if’ is not,” Rubin goes on. “Also, the longer we wait, the greater the damage — and the harsher the response needed.

“The European financial crisis that began in early 2010 shows how markets can ignore unsound conditions for a long time – until they don’t. For many years, Greek sovereign bonds traded at virtually the same yields as their German counterparts, which made no sense. Then, when the bond markets suddenly focused on the fiscal problems plaguing Greece and the other weaker countries, interest rates spiraled into crisis.”

Yes, the tax cuts are a net positive for the economy. But without spending cuts to match, it’s just borrowing from the future — a phony sugar high that’s bound to end badly. And the growth never generates enough tax revenue to offset the drag of ever-growing annual deficits. It wasn’t enough under Reagan in the 1980s (and it ended badly with the 1991 recession), it wasn’t enough under Bush 43 in the early 2000s (and it ended very badly with the 2007–09 “Great Recession”) and it won’t be enough under Trump now.

But don’t take our word for it — take David Walker’s.

Walker was the U.S. comptroller general — Uncle Sam’s chief accountant, you might say — from 1998–2008. He was also the “protagonist” of I.O.U.S.A. — Addison and the filmmakers following him from city to city on his “Fiscal Wake-Up Tour,” trying to alert anyone willing to listen about the hazards of that massive debt burden.

In the decade since he left his government post, he’s still speaking up at every opportunity. Last spring, CNBC interviewed him a few days after Donald Trump and the Congress went on a new $300 billion spending binge.

“The fiscal gap is too great to close it with growth alone,” he said. “Over 70% of the budget now is on autopilot — so-called mandatory spending, Social Security, Medicare, Medicaid, etc. We have made no meaningful progress on defusing that ticking time bomb.”

But that’s not all: “We can see on the horizon that the federal budget may end up spending a trillion dollars [a year] on interest alone in the not-too-distant future. And what do you get for interest? Nothing.”

And the government’s annual interest expense is only going up from here.

One reason catastrophe hasn’t struck in the decade since 2008 is that the Federal Reserve has kept its thumb on interest rates for so long.

But now interest rates are rising. At this time in 2016, a three-month Treasury bill carried a paltry 0.29% interest rate. As we write this morning, it’s 2.06%. And the Federal Reserve is bound and determined to keep raising rates.

Even if catastrophe isn’t in the offing, a garden-variety recession might be.

Back to Robert Rubin: “In the late 1980s, a senior Democratic House member told me I had long warned of the effects of deficits and nothing bad had happened.

“Sure enough, in 1990, increasing deficits and debt (as a percentage of the economy) over many years contributed to higher interest rates; a lessening of business confidence due to uncertainty about future policy and a concern that our political system could no longer meet our challenges; and, ultimately, the 1991 recession.”

Reminder: That bust came on the heels of the Reagan boom, fueled by tax cuts that weren’t offset with spending cuts. Nor is that the only historical parallel: As we’ve detailed before, interest rate increases by the Fed — against the wishes of the White House — also set the stage for the 1991 recession.

That’s a best-case scenario. But what if the endgame this time is an end to Washington’s hegemony over the rest of the world?

One of the more compelling segments from I.O.U.S.A. is a retelling of the Suez crisis in 1956. That year, Egypt’s strongman leader Nasser had nationalized the Suez Canal — much to the consternation of the old colonial power, Great Britain. So London hatched a scheme along with French and Israeli leaders to invade Egypt and carry out regime change.

In Washington, President Eisenhower was furious. He saw the invasion as a reckless gambit. He feared the Soviet Union would come to Nasser’s defense and the globe would stumble into World War III.

Ike had leverage over the British. The United States held much of Britain’s debt, and he threatened to sell it off. Within weeks, the British relented and withdrew from Egypt.

By that time, the British Empire was already a husk of its once-mighty self — having given up most of its colonial possessions a decade earlier. But some historians look on London’s climb-down at Suez as the death blow.

Fast-forward to this morning’s headlines: China has a definitive plan to end-run Trump’s economic sanctions against Iran.

From the Reuters newswire: “Chinese buyers of Iranian oil are starting to shift their cargoes to vessels owned by National Iranian Tanker Co. (NITC) for nearly all of their imports to keep supply flowing amid the re-imposition of economic sanctions by the United States.”

As we’ve mentioned from time to time, China is Iran’s biggest oil customer.

“To safeguard their supplies,” Reuters goes on, “state oil trader Zhuhai Zhenrong Corp. and Sinopec Group, Asia’s biggest refiner, have activated a clause in its long-term supply agreements with National Iranian Oil Corp. (NIOC) that allows them to use NITC-operated tankers, according to four sources with direct knowledge of the matter.”

No, that’s not a Suez-level hammer. The Chinese don’t have one of those — not yet, anyway. It’s true that Beijing is the largest foreign holder of U.S. Treasury debt, but as we’ve pointed out before, a fire sale of its Treasury holdings would hurt China at least as much as the United States.

But China’s defiance of the sanctions is a signpost on the road to Washington’s own Suez-level reckoning one day.

We turn to an old friend of Addison’s and of The 5, Chuck Butler — editor of the venerable Daily Pfennig e-letter. He turned us onto the Iranian crude story this morning.

“The world has grown up and is finding ways to go around the orders of the U.S. And if we didn’t owe the world huge sums of money (debt), we would be able to continue to direct the world. But we gave that ability up when we decided to go down this ‘debt doesn’t matter’ road.”

P.S. We didn’t plan it this way, but this ended up being a rare single-topic episode of The 5. There wasn’t anything else that urgent today. While we were plugging away, we see the S&P 500 reached a record high. More about that tomorrow.

P.P.S. One more thing by way of follow-up: Back in February we mentioned David Walker was running for governor of Connecticut. Then we forgot all about it. Turns out he fell short in a crowded race for the Republican nomination…