“Depression is the leading cause of ill health and disability worldwide, and treatment-resistant depression affects more than 100 million people,” says George Goldsmith, co-founder of Compass Pathways.

Compass Pathways is a startup testing the efficacy of psilocybin — the chemical compound in “magic mushrooms” — for the treatment of depression. The London-based company started in 2016 thanks in part to cash from American venture capitalist Peter Thiel. 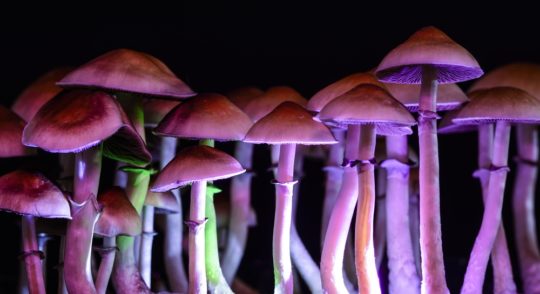 Already, Compass has gotten approval for clinical testing in the U.K., the Netherlands and Canada; last week, the FDA authorized a clinical trial in the U.S.

Fox News reports: “The trial is expected to be a Phase 2B dose-ranging study involving 216 patients in 12–15 research sites across Europe and North America.

“Compass Pathways says psilocybin therapy, which combines a dose of psilocybin, a psychoactive medicine… with psychological support has shown promising signals of efficacy and safety as a treatment for depression in academic studies in both the U.K. and U.S.”

Researchers believe tripping on hallucinogenic “magic mushrooms” might do just that — trip the brain’s hard-wiring to “reboot” and dump the pessimistic thinking so prevalent in clinical depression.

If testing’s successful, trials will be expanded to Phase 3 clinical trials that would include hundreds more patients and further study of side effects.

And “magic mushrooms” aren’t just being used to treat depression…

Testing in the U.S. is already underway: Psilocybin’s being investigated for the treatment of side effects from chemotherapy and radiation.

Separate studies at NYU and Johns Hopkins University looked at the effects of one high dose of the hallucinogen on patients with late-stage cancer. The study showed fast-acting and persistent palliative effects on mood and anxiety.

Dr. Stephen Ross of NYU’s Department of Psychiatry says that psilocybin has the potential to “transform the care of cancer patients with psychological and existential distress… That is potentially earth-shattering and a big paradigm shift.”

On the subject of “paradigm shift,” what if there’s a way to use psilocybin as a legitimate alternative to opioid painkillers… and the addiction that too often follows?

Over 2 million people in the U.S. are addicted to prescription opioid painkillers, with many more using the drugs illegally.

And based on the most recent data available from the CDC, 2017 was the worst year ever for drug overdose deaths in the U.S. with roughly 72,000 deaths (49,000 of that number due to opioids). 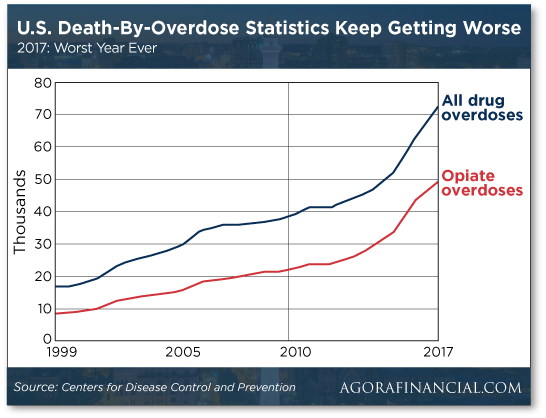 And the standard “cure” for addiction is almost as bad as the disease, with specialists prescribing methadone, buprenorphine and naltrexone as opioid substitutes that are often used for the duration.

“Magic mushrooms” offer a new approach to treating addiction. Instead of simply trading one addiction for another, data show something altogether different.

Psilocybin is not addictive.

According to Roland R. Griffiths, professor of psychiatry and behavioral sciences at Johns Hopkins, “Most classic psychedelics, such as psilocybin, don’t fit the conventional profile of a drug of abuse.”

A new study, published in the Journal of Psychopharmacology, found opioid abuse and addiction decreased with the use of psychedelics.

Hmm… Does psilocybin remind you of anything?

With significant applications for depression, cancer treatment side effects and opioid addiction — and many more we don’t have time to list — cannabis is an obvious connection.

It’s a reasonable comparison: Psilocybin-producing mushrooms might be the next cannabis… with revenue potential similar to cannabusiness. Psilocybusiness? Heh.

Andrew Keene — options-trading expert and editor at 7-Day Spikes — agrees: “The use of mushrooms… is a growing trend that is finally reaching its tipping-point moment.

“Just like pot, this will mint a new class of millionaires,” he says.

“The legalization of pot in just a handful of states has unleashed a flood of investment money, business revenue, job growth and an unprecedented opportunity for early investors to cash in big,” says Andrew.

“Quite frankly,” he continues, “I thought I’d never see something like [it] again.”

But “if the ‘magic mushroom’ market is anywhere near the potential of pot (and my research has convinced me it is), you could make millions before this is even legalized.”

Just look at the potential to disrupt the following multibillion-dollar industries:

“Massive profits became a reality for thousands of ordinary Americans who got in early with pot stocks,” Andrew says. “It’s an opportunity for you — now — with ‘magic mushrooms.’”

[Ed. note: Wish you’d gotten in on the pot market in the early days?

Here’s your do-over… your chance to get in on the ground floor of a brand-new market where Andrew will show you opportunities to collect profits over $16,000 — weekly

Andrew’s reserved 200 openings for his 7-Day Spikes service… And he’s following one company poised to dominate the “magic mushroom” market.

The way Andrew sees it, you could invest as little as $25 in this company to trade your way to a 3,209% profit jackpot.

But only if you take action before this opportunity ends on Sept. 14. Click here now for all the details.]

“Student loan debt is now the second-highest consumer debt category — behind only mortgage debt — and higher than both credit cards and auto loans,” Forbes reports.

“There are more than 44 million borrowers who collectively owe $1.5 trillion in student loan debt in the U.S. alone.” That’s a high-water mark…

Now the average 2016 graduate has $37,172 in student loan debt to repay. Congratulations?

Perhaps the most eye-popping statistic is that student loan debt increased in the last quarter by $29 billion.

(USA! USA!) Consumer confidence hasn’t been this high in almost 18 years… October 2000, to be precise — when Christina Aguilera was topping the charts and the Ben Stiller comedy Meet the Parents was in theaters.

Checking in on the markets…

The Dow’s continued to climb to 26,069, up about 20 points, while the Nasdaq’s still holding steady above yesterday’s all-time highs, sitting at 8,018 today.

“Some of the most lucrative opportunities found in financial markets are out-of-favor plays that are unpopular with the crowd,” says retirement and investment specialist Mike Burnick.

“And now we’re getting the exact type of sentiment signal from gold,” he says, “The perfect contrarian buy signal!…

“In fact, the ‘smart money’ is shorter now than when gold prices bottomed in 2015,” Mike says, and he can’t help but note their impeccable timing then.

“Speculators had the fewest short positions in gold right at the top [of gold’s price] in 2011.

“And it’s not just the big hedge fund crowd that’s heading the wrong way with gold, either,” he says. Retail investors are losing faith in the yellow metal in droves. 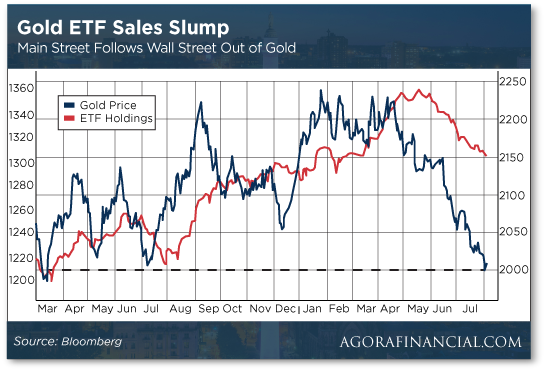 “Last week was the fourth straight week of commodity ETF outflows, led by precious metals ETFs, which had outflows of nearly $900 million over the past two weeks alone.”

“The last time gold ETF outflows were even close to this much in such a short time frame was mid-2017.

“Gold prices bottomed in July and went on a tear to the upside, gaining nearly 12% in just two months!

“For my money,” Mike says, “gold is at or very near a bottom, and we have double-barreled contrarian buy signals on the yellow metal.”

“A Japanese rail firm has defended a safety exercise in which employees had to sit beside the tracks as bullet trains sped through tunnels at 186 miles (300 km) an hour,” says an article at the Daily Mail.

Roughly 200 maintenance workers have endured the unorthodox training that’s aimed at showing them — what else? — “the potential dangers of the train and impress on them how seriously they needed to take their jobs.” 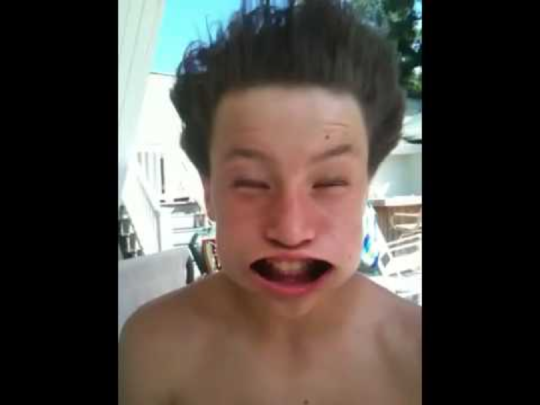 “The company, JR West, said it had no plans to alter the exercise despite complaints from some employees,” the article continues.

“We pay close attention to safety while doing the training,” says a company spokesman, “We will continue this training while ensuring it serves a purpose and is done safely.”

We’re sorry… but nothing about this screams “safe.”

Here are some employee testimonials:

“It was a horrible experience,” says one. Understatement…

While another says it felt “just like a public flogging.” If by “public” you mean passengers whizzing by at approximately 200 mph, we sorta get that.

Quick question: How’s JR West’s benefits package? Because we’re pretty sure there are about 200 or so employees who’ll be seeking treatment for PTSD.

He has new recommendations every week, but he’s extra enthusiastic about the “magic mushrooms” play we hinted at above.

Events are moving fast, though. He says after Sept. 14 — less than three weeks from now — the window of opportunity will have probably closed.

So now’s the time to act. Andrew shows you how to unlock the profit potential when you click here.