“In the coming years the dollar will be facing a barrage of attacks with the goal of eroding its hegemony,” writes Gal Luft in an opinion piece at CNBC’s website.

And with that, the concept of “de-dollarization” has hit the mainstream — more than four years after The 5 first alerted you to it.

Mr. Luft — co-director of an outfit called the Institute for the Analysis of Global Security — points out the U.S. government is “waging economic warfare against one-tenth of the world’s countries…

“These include Russia, Iran, Venezuela, Cuba, Sudan, Zimbabwe, Myanmar, the Democratic Republic of Congo, North Korea and others on which Washington has imposed sanctions over the years, but also countries like China, Pakistan and Turkey, which are not under full sanctions but rather targets of other punitive economic measures.”

All told, we’re looking at countries comprising more than a quarter of the globe’s population and economic output nearly equal to that of America’s. Together, they seek to “[join] forces to create a parallel financial system which would be out of reach of America’s long arm.”

We noticed the first use of the term “de-dollarization” in May 2014.

Russian state media reported on what was labeled a de-dollarization meeting among top Russian officials, ahead of a summit between President Putin and Chinese President Xi. The two leaders signed a $400 billion natural gas deal that, by most accounts, was executed using yuan and rubles — not the world’s reserve currency, the dollar.

Since then, many other nations on Luft’s list have struck similar agreements. What’s more, “Last month’s BRICS (Brazil, Russia, India, China, South Africa) summit in Johannesburg was a call to arms against the dollar hegemony with countries like Turkey, Jamaica, Indonesia, Argentina and Egypt invited to join in what is known as ‘BRICS plus’ with the goal of creating a de-dollarized economy.”

The long-term consequences could be devastating for the United States, Luft warns: “Bull markets eventually come to an end and with a [U.S.] national debt of $21 trillion and growing at a rate of a trillion dollars a year, the awakening could be ruder and sooner than most economists predict.”

While that might be news to CNBC, it’s certainly not to our own Jim Rickards: “I’ve been warning for years about efforts of nations like Russia and China to escape what they call ‘dollar hegemony’ and create a new financial system that does not depend on the dollar and helps them get out from under dollar-based economic sanctions.”

Ever since that May 2014 meeting, we’ve periodically plugged “de-dollarization” into Google Trends, just to see what the level of interest is…

Hmmm… Turns out May 2014 was the peak. And there was a long period of no interest at all last year.

But Mr. Luft’s column signals interest is about to revive in a huge way.

Indeed, we suspect a new peak in “de-dollarization” interest is in store only nine days from now.

First, some essential background. Luft points out the Chinese and Russians have gone much further than transacting in each other’s currencies. They’ve developed “their own versions of the Society for Worldwide Interbank Financial Telecommunication (SWIFT), the global network that allows cross-border financial transactions among thousands of banks.”

Why is that important? It goes back to something we’ve pointed out ever since Donald Trump re-imposed U.S. sanctions on Iran last spring: The impact goes far beyond Boeing canceling a few Iranian orders for jetliners. Because SWIFT is so tied in with the dollar, the rest of the world is also effectively under orders to comply.

“Any transaction done in U.S. dollars or using a U.S. bank automatically brings the trading parties under American legal jurisdiction,” Luft elaborates. “When the U.S. decides to impose unilateral sanctions, as in the case of Iran, it essentially tells the world’s governments, corporations and individuals they must choose between halting business with the sanctioned country or be shut off from the world’s No. 1 economy.”

Now the Europeans are ramping up their interest in breaking free from SWIFT.

When last we left this saga a few days ago, Germany’s foreign minister Heiko Maas had suggested Europe launch its own payments network, just like the Chinese and Russians.

Chancellor Angela Merkel quickly slapped Maas down for speaking out of school, but now it appears that rebuke was strictly for public consumption.

Writes Pepe Escobar at Asia Times: “According to a newsletter circulating among select EU financial circles, German Foreign Minister Maas ‘did not launch this trial balloon without permission from Merkel.’’ Indeed, the buzz is that the topic was on the agenda of Merkel’s summit with Russia’s Putin.

Confirmation appeared to come on Monday when Maas once again piped up about such plans. As Bloomberg reports, “Germany and France said they’re working on financing solutions to sidestep U.S. sanctions against countries such as Iran.”

Said French finance minister Bruno Le Maire: “We are determined to work on an independent European or Franco-German financing tool which would allow us to avoid being the collateral victims of U.S. extraterritorial sanctions.”

[5 Min. flashback: It was Le Maire who called Washington the “economic policeman of the planet” after Trump revived the Iran sanctions in May.]

All of this is the backdrop for an extraordinary summit coming up on Sept. 7 — a week from this coming Friday.

The place: Istanbul, Turkey. The attendees: Putin of Russia, Merkel of Germany, Macron of France and Erdoğan of Turkey.

If Merkel and Putin spoke privately about de-dollarization a few days ago, it’s not far-fetched to imagine all four of these leaders talking about it openly a few days from now.

No, there won’t be any bombshell announcements to rock global markets. (Well, we don’t think so.)

But, says our resident de-dollarization authority Jim Rickards, “this is just one more development pushing the world at large away from dollars and toward alternatives of all kinds, including new payment systems and cryptocurrencies.

“It’s also one more sign that dollar dominance in global finance may end sooner than most expect. We are getting dangerously close to that point right now.”

[Ed. note: Jim has a message this week that carries even more urgency — a short video he recorded that he fears might be the next to fall victim to the “purge” being carried out by the internet and social media giants.

What’s he saying that might have him marked for deletion? How can you protect yourself — and maybe even profit from this information? Check it out right here — while you still can.]

To the markets today, where the milestones continue to fall.

The only economic number of note today is the Commerce Department’s latest guess at second-quarter GDP: It’s an annualized 4.2%, up from the first guess of 4.1%.

The reason for gold’s big pop above $1,200 last Friday is no mystery to the aforementioned Jim Rickards.

“Federal Reserve Chairman Jay Powell’s speech in Jackson Hole, Wyoming, gave the markets new reason to question if the Fed really knows what they’re doing (they don’t) and reveals that the chance of the Fed taking a pause in their current path of interest rate hikes is greater than the markets had been estimating.

“A pause in Fed rate hikes implies lower rates and a weaker dollar, which translates directly into a higher dollar price for gold.” 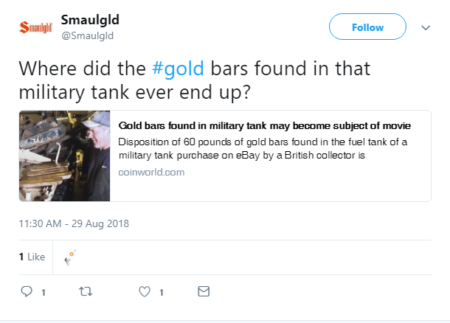 In April of last year, we passed along the story of an Englishman named Nick Mead who collects tanks and bought a Russian-made T54/69 off eBay. Inside the fuel tank he discovered five gold bars weighing up to 12 pounds each, worth a total of $1.1 million at today’s prices.

“We didn’t know what to do,” he told the tabloid The Sun. “You can’t exactly take five gold bullion bars down to Cash Converters without questions being asked, so we called the police.”

Near as anyone could tell, the tank was used by the Iraqi army. The gold was probably looted from the Kuwaiti government during Saddam Hussein’s invasion of Kuwait in 1990. As we said at the time, good luck to the cops trying to untangle that chain of custody.

Here we are 16 months later and the cops are still stumped. “Still in limbo,” Mead tells Coin World.

Which is fine by him — he was always more interested in the tank anyway. And as a bonus, he says he’s been approached about having the story turned into a movie.

Doesn’t sound like much of a plot, but that’s just us…

To the mailbag, and a longtimer’s reaction to our “magic mushrooms” exposé yesterday…

“In the movie Jackie Brown, when Ordell points out to Melanie that her constant pot smoking will rob her of her ambition she replies, ‘Not if your ambition is to get high and watch TV.’

“Which brings up an interesting point: With half the country getting high off bong hits and the other half trippin’ balls on shrooms, who is going to be left to go to work and pay for all of this?

“Or can we expect a new study from the pro-crack lobby touting the ‘work all day, work all night’ wonders of just a small taste of one of those little white rocks?

“I hate to be the one who channels Nancy Reagan here, but this just seems to be a little too close to the last days of the Roman Empire for my taste.”

The 5: We might well be in something akin to the last days of the Roman Empire, but legal cannabis is not one of the signposts on the road to the decline and fall.

We were listening last night to our acquaintance Scott Horton’s podcast. He was interviewing Mason Tvert from the Marijuana Policy Project, who was describing the successful campaign to legalize recreational weed in Colorado via a 2012 referendum.

Tvert and his colleagues racked their brains for an argument that would change enough minds to reach critical mass. The traditional ones — the harm that comes from prohibition, the benefits to government services from taxing legal cannabis — didn’t catch fire.

What did catch fire was the message that marijuana is less dangerous than alcohol. From there, all it took was a few carefully staged publicity stunts. The group challenged both GOP donor Pete Coors and Denver’s Democratic Mayor John Hickenlooper (a brewpub owner) to “drug duels” to see which substance — beer or budski — would put a person under the table quicker.

Neither took up the challenge, but the rest is history. Hickenlooper later became governor of Colorado and opposed the referendum… but by 2016 he said, “It’s beginning to look like it might work.”

No, if you’re looking for Rome analogies it’s easier to point to the aforementioned $21 trillion national debt… or the veneration of the military at sporting events… or maybe the Kardashian family.

P.S. As long as we brought up legal marijuana, the next milestone for “canna-business” is only three days away.

We’ll talk more about the profit potential tomorrow. Or if you’d rather not wait, you can check out this report from America’s No. 1 penny pot stock expert, Ray Blanco, right away.