Nevada tax collectors are higher than the moon over the state’s marijuana tax revenues.

Recreational marijuana became legal in the Silver State on July 1 of last year. As we documented at the time, the business got off to a tortoise-slow start because distributor licenses were handed out only to existing alcohol distributors. (Never underestimate the power of the booze lobby.)

As a result, supply was so limited the governor issued a “statement of emergency” (seriously!), and the Nevada Tax Commission agreed to expand the universe of legal weed distributors.

A year later, the rest is history: “As we move into fiscal year 2019, we expect to see continued growth in the industry by way of additional businesses opening up, and we expect revenues to continue to be strong,” says Nevada Tax Director Bill Anderson.

About 39% of that $70 million tax take goes to schools, the rest to the state’s rainy-day fund.

(Psst… Hey, Nevada politicos… You might want to work on shoring up your pension system. Your future obligations are only 72% funded right now, according to the Tax Foundation. Better than average, but a lot of room for improvement.)

Meanwhile, in the nation’s third most-populous state, the governor has done an about-face on marijuana legalization.

It wasn’t that long ago New York Gov. Andrew Cuomo routinely denounced weed as a “gateway drug” — proving Democrats can be just as obtuse on the subject as Attorney General Jeff Sessions.

But last month, Cuomo gave his backing to a report from the state health department saying the “positive effects” of legalization “outweigh the potential negative impacts.”

The fact Cuomo faces a serious primary challenge from the left this year in the person of actress Cynthia Nixon… and the fact Nixon came out early and often for legalization… is, of course, purely coincidental. Heh…

Amusing aside: Cuomo and Nixon faced off in a debate last night — with an American Sign Language interpreter featured in the corner of the TV screen. When the subject of legalization came up, tens of thousands of TV viewers learned how to sign “marijuana”… 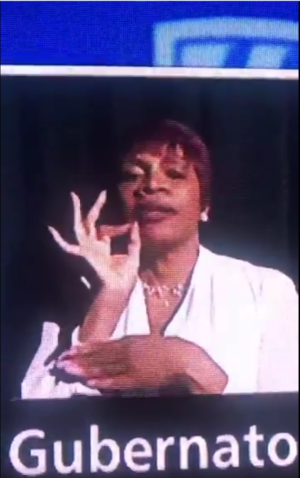 Back on the other side of the country, “something strange is happening in California’s Salinas Valley,” says our penny pot stock authority Ray Blanco.

A region famous for being the “Salad Bowl of the World” is getting a reputation for a different kind of bowl.

“The change is happening in the greenhouses that dot the valley,” Ray tells us after a recent visit. “Formerly home to fresh flower growers primarily, one local farmer estimates that around 95% of the commercial greenhouse space in the Salinas Valley has been converted to grow legal cannabis.

“At a glance, you may not realize that the farm you’re driving by is home to thousands of cannabis plants. The whole greenhouse structure is surrounded by a tall privacy fence and there’s no signage telling you where you are.”

But once inside, there’s no mistaking… 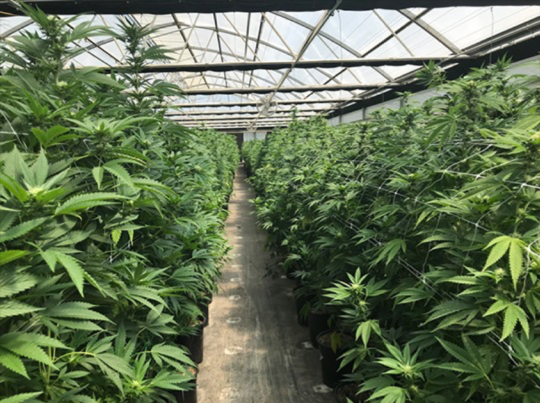 The Salinas farm Ray visited “was purchased by a major pot proprietor in May, and it’s been working hard to implement infrastructure and make the facility compliant with the California cannabis regulations that go into effect at the start of January.”

Ray says the remarkable thing is that many of these greenhouses have sat vacant since the 1980s… when competition from Asia and Latin America all but destroyed the valley’s cut-flower business. “Now commercial marijuana production means jobs are coming back.”

Ray’s on-site research hasn’t turned up a new buy recommendation yet… but that’s OK, because he has several other picks that are buys right now — ideally either today or tomorrow.

If you have yet to dip your toe into penny pot stocks, here’s where Ray says you can get your start.

And if you already have a bit of experience — or if you have a bigger-than-usual risk tolerance — Ray has some plays in mind for you too.

The major U.S. stock indexes are taking a breather after the S&P 500 and the Nasdaq notched record closes yesterday.

Bucking the downward trajectory is Amazon — up 1% on the day and now more than $2,000 a share.

Gold’s grip on the $1,200 level is slipping fast, the bid now $1,198. But crude has rebounded big this week — checking our screens, a barrel of West Texas Intermediate is only 19 cents away from $70 again.

For the moment, traders don’t appear too freaked out about the latest emerging-market turmoil: Argentina is asking the International Monetary Fund to release its bailout money ahead of schedule, while Turkey’s central bank is withdrawing some of its emergency support for the country’s banks.

Meanwhile, U.S.-Canada trade talks are making progress; Canadian foreign minister Chrystia Freeland says there’s already a deal on cars. (If you’ve seen Freeland on TV and she looks familiar, she used to work for the Financial Times among other news outlets and made steady appearances as a TV pundit. She was a semi-regular on The McLaughlin Group.)

Americans are once again spending out of an empty pocket, according to the Commerce Department’s monthly “income and spend” report.

Personal incomes grew 0.3% last month, but consumer spending grew faster, at 0.4%. Thus the savings rate fell a bit to an alleged figure of 6.7%.

We say “alleged” because the Commerce Department wonks performed a major revision last month to how that number is calculated — revising it upward for 10 of the last 11 years, sometimes by a lot. Most of that “increased” savings was by small-business owners, not wage slaves. Ain’t statistics fun?

Meanwhile, the same report shows the Federal Reserve’s preferred measure of inflation — “core PCE,” it’s called — is back to the Fed’s 2% target. This is the first year since 2012 that it has spent a meaningful amount of time near that level… 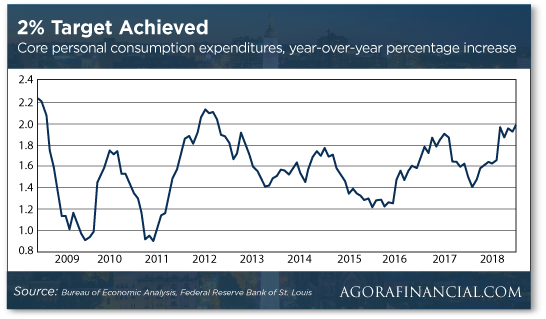 We’re going to stick our neck out here and say inflation will accelerate further in the months ahead, and the Fed will stick with its plans to raise interest rates once every quarter — much to the consternation of the president who fears higher rates will transform the boom into a bust.

Mike cautions that does not mean stocks will slip again in September — even though September is typically a lousy month for the market.

“One thing is crystal clear,” he says — “U.S. stocks are king of the hill by a widening margin.” Check out this chart of the S&P 500 versus an index of global stocks excluding the United States… 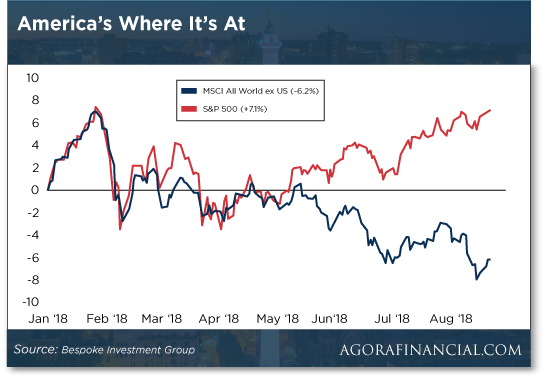 No surprise, the global index is being dragged down by emerging markets. (See above re Turkey and Argentina.)

As you might have heard already, the feds charged the Cleveland Browns linebacker with insider trading. Prosecutors say he got tips from a (now former) Goldman Sachs analyst named Damilare Sonoiki.

Your editor first caught the story last night on SportsCenter — where the coverage was frustratingly thin. Supposedly Kendricks gained $1.2 million from the trades, but at no time were we told exactly what the feds accuse the two of doing.

Turns out they say Sonoiki gave Kendricks inside info on pending acquisitions involving four companies in 2014. In each case, they say Kendricks bought call options and bagged profits as high as 393%.

As always when examining an “insider trading” case, we’re compelled to ask, “Where’s the victim?”

Newsletter legend Doug Casey has long held that in most cases, insider trading is a victimless crime.

“For example,” he said in 2011, “there’s nothing wrong with a manager who knows his company will report a good quarter buying shares in his company in advance. This causes no one any harm. Let me repeat that: The fact that an insider knows — or thinks he knows — good news is coming and buys shares does not hurt anyone.

“The guy who knows something and buys has not taken anything from unwilling hands — just uninformed hands — and people have to make decisions with varying amounts of uncertainty all the time. You can’t regulate uncertainty or the uneven spread of information out of existence any more than you can regulate the capacity to intuit the significance of information into every human skull. Not only is it impossible to do, it’s ethically wrong to try.

Yet Sonoiki and Kendricks face up to 25 years in prison. They probably won’t get anywhere near that, given that both men’s lawyers say they’re likely to plead guilty, but still…

To the mailbag, where a longtimer reacts to our extended meditation yesterday on “de-dollarization”…

“If China, Russia and the Europeans want to manage their own currency affairs, they could likely set something in motion sooner or later. Is that in their best interests?

“Do these people not remember the 20th century? Are these not the same people who could not fight their way out of their Eurasian paper bag in two world wars without American intervention?

“Rather than fear, this could be the type of dumpster fire to invoke great entertainment value for Agora Financial.”

The 5: It’s true that we try to view the follies of politicians and central bankers with a certain amused detachment, just part of life’s rich pageant. Take this stuff too seriously and it would seriously disturb one’s sleep.

Which brings us back to the fellow we cited at the top of yesterday’s episode — Gal Luft from the Institute for the Analysis of Global Security.

His diagnosis was spot-on, which is why we cited it. The final paragraph of his article begins thus: “In the midst of America’s economic euphoria it is worth remembering that one of every four people on the planet lives today in a country whose government is committed to end the dollar hegemony.”

But, taking himself oh-so-seriously and in true world-improver fashion, the last sentence reads: “Thwarting their effort should be Washington’s top national priority.”

The underlying assumption is that 1) “thwarting their effort” is a worthwhile undertaking and 2) it’s an undertaking that would succeed.

We’re sure the so-called “Deep State” types believe this to the core of their being. And we suspect the Trumpian nationalist types probably think the same thing — America uber alles.

The thought that empires come and go? Or the fact that Washington commands an empire to begin with? It doesn’t even occur to them…

P.S. Keep an eye out for an early arrival of tomorrow’s 5. Quite early, in fact. Maybe even before the market open.

Why the rush? You’ll see…