Are we the only ones yawning over the “bombshell” Op-Ed in The New York Times?

Unless you’ve spent the last 24 hours in a cave, you’re likely aware the Gray Lady gave space to an anonymous “senior official in the Trump administration whose identity is known to us and whose job would be jeopardized by its disclosure.”

The Coward — as we shall label this individual — claims to have joined forces with colleagues who are “thwarting Mr. Trump’s more misguided impulses until he is out of office…

“It may be cold comfort in this chaotic era, but Americans should know that there are adults in the room.”

Notably absent from the screed is any, you know, examples of what The Coward and his/her fellow “adults in the room” have done to “thwart” those “misguided impulses.”

Examples would have lent credibility to The Coward’s claims. Absent such examples, we can dismiss The Coward as engaging in an act of virtue-signaling.

Whatever. Claims about “adults in the room” have been made going back to the administration’s earliest days. Remember the “suicide pact” between Secretary of State Rex Tillerson, Treasury Secretary Steven Mnuchin and Defense Secretary James Mattis?

As the story went, if one was pushed out, the others would resign. In the event, Tillerson was pushed out while Mnuchin and Mattis are still there. 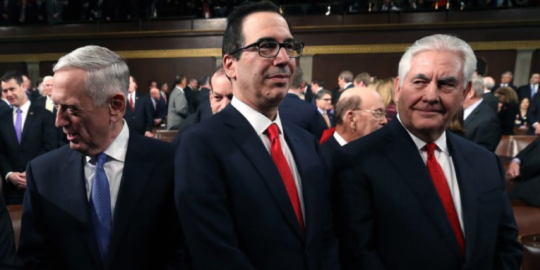 But the narrative persists — gaining new purchase this week with the Times Op-Ed and the pending release of a new Bob Woodward book.

This morning, we posit a completely different narrative of how things get done in the Trump administration.

What follows is not an assertion of fact. It’s merely a thought experiment. You might call it the Unified Trump Theory. We’ll look at events over the next few weeks through the lens of this theory to see how well the theory holds up. If it does, it should lend us significant clues about what’s ahead for the markets, the economy and the culture at large.

The theory goes like this: Donald Trump is fatally compromised.

No, not by the Russians — we never bought into that garbage around here — but rather by the “Deep State.”

The Deep State doesn’t have to “thwart” Trump’s “misguided impulses.” Under the Unified Trump Theory, the president has been effectively blackmailed into doing the Deep State’s bidding — because of a rather different set of “impulses” he gave into.

Recall last month how his one-time “fixer” Michael Cohen pleaded guilty to, among other things, two violations of campaign-finance law. In the course of entering that plea, Cohen said that “in coordination and at the direction of a candidate for federal office,” he prevented information from going public during the 2016 campaign that would have damaged Trump.

It wasn’t hard to read between the lines: Cohen was claiming Trump ordered him to pay hush money to the adult film starlet known as “Stormy Daniels” — fearing that if she went public, it would doom his campaign.

“Trump’s infidelities were obviously well-known,” Tracey writes, “but it’s not crazy to think the particular egregiousness of this one might’ve moved a small percentage of voters. I personally spoke to conservative Christian voters (mostly women) for whom this conceivably could’ve been the final straw.”

Whether or not it happened the way Cohen described, it doesn’t matter: The mere allegation he ordered the payoff is a hammer the Deep State can hold over Trump for as long as he remains in office.

While a sitting president can’t be criminally prosecuted, the moment he leaves office he’s fair game. Thus, under the Unified Trump Theory, the Deep State has put him on notice: Do as we say and we’ll leave you alone once your term is up.

As supporting evidence for the Unified Trump Theory, we point to the following examples. In large part they precede the Cohen plea, but what’s to say the Cohen plea is the only hammer the Deep State has over Trump?

Remember during the 2016 campaign when many former ambassadors, national security wonks, intelligence officials and whatnot were signing open letters declaring Trump was unfit to be president?

Jeffrey signed one of those letters. As far as we know, he’s the first person to have done so… and obtain a post in the Trump administration. We’re sure he won’t be the last.

Jeffrey’s background is such that he’ll likely steer Washington’s Syria policy back toward the Obama-era support for “moderate” jihadis — many of them affiliated with al-Qaida — who seek to overthrow the Assad regime.

Under the Unified Trump Theory, the Deep State need not resort to impeachment or some 25th Amendment maneuver to neutralize Trump… because he’s already been neutralized.

That doesn’t rule out an impeachment drama — it might be useful in terms of divide-and-rule — but it’s not essential to “thwart Trump’s impulses.”

The theory will be easy to test over the coming weeks and months. Ignore what Trump says and watch what he does. He can continue to put on the appearance of being in charge and he can even continue whipping up his base — leading MAGA rallies where he’ll throw shade at immigrants and Muslims — but actual policy will reflect the agenda of the Deep State’s middle-of-the-road GOP wing.

Today’s stock market trade is a continuation of yesterday’s — resilience in the blue chips, a slide in the tech sector.

At last check, the Dow is down barely a tenth of a percent. But the Nasdaq is down nearly 1% on top of yesterday’s slide of nearly 1.2%. Facebook now sits at four-month lows.

Overseas, emerging markets are officially in a bear market — with EEM, the big emerging-markets ETF, now 20% below its late-January highs.

Gold can’t recover from its latest whacking below $1,120, the bid at last check $1,198. Meanwhile, the latest oil inventory numbers have sent West Texas Intermediate crude tumbling to $67.61; the most recent pop past $70 this week lasted maybe a nanosecond.

In theory, no nation is supposed to be importing Iranian oil as of early November… and the fact oil is traded in U.S. dollars was supposed to give those sanctions teeth.

But the Chinese — Iran’s biggest oil customers — were never going to sign onto the new sanctions, and they’ve already come up with workarounds. India, however, is a major ally of Washington’s, in addition to being Iran’s No. 2 oil customer. The Trump administration was surely hoping New Delhi would go along.

And while the Chinese have at least committed to keeping their imports of Iranian crude at current levels, India is making no such promise. Thus, it’s possible India will end up consuming all the Iranian oil currently consumed by Europeans, rendering the sanctions effectively null and void.

On the ongoing topic of marijuana legalization, a reader writes: “It’s a wonder our nation ever developed into a world power considering that pot and a whole lot of stronger drugs were all legal under federal law up till the FDR reign began.

“By the same token, that line of thinking should have resulted in everyone in the U.S. becoming a raving alcoholic after Prohibition was repealed.

“There’s a large amount of willful ignorance in our society concerning drugs versus the addictive personality.”

The 5: Don’t forget much of the “Reefer Madness” that got cranked up in the 1930s was the result of Prohibition’s repeal. Suddenly there were a lot of G-Men sitting around with nothing to do… until a new substance scare could be ginned up.

Now we rewind the clock to events of a decade ago as we tee up a reader’s remarks on insider trading.

“If I’m not mistaken, Hank Paulson, the Treasury secretary under George II, told members of Congress and the public that Fannie Mae and Freddie Mac were solvent and likely to stay that way. A short time later this cretin told a room full of hedge fund managers that the same two would be in the hands of receivers in short order.

“The hedge funds involved had a window of opportunity to unload their shares in the two entities before the bad news came out. I have three questions:

1) Was this insider trading?

2) Were the mom and pop investors that got wiped out when Fannie and Freddie crashed victims?

3) What planet is Doug Casey from?”

The 5: When you’re talking about pending government interventions in the marketplace, there’s no doubt in our minds that trading on such information is profoundly unfair and ought to be criminal. We don’t think that’s what Casey has had in mind all these years when characterizing insider trading as a victimless crime.

By the way, when it comes to members of Congress trading on pending legislation… that became illegal only in 2012!

P.S. For many people, the thought of working past retirement age is a nonstarter.

But what if that “workweek” lasted all of 60 seconds?

You probably wouldn’t mind that kind of post-retirement career, would you?

Best of all, you can do it no matter your age — check out the 60-second demonstration at this link.