Hmmm… The big “de-dollarization” summit that was supposed to take place today isn’t happening after all.

Instead, a very different meeting is underway — the participants hoping, in part, to avert World War III. Good times.

Yes, we should back up a bit: As August drew to a close, our understanding was that a meeting was set for today in Istanbul, Turkey. In attendance would be German Chancellor Angela Merkel, French President Emmanuel Macron, Russian President Vladimir Putin and Turkey’s President Recep Tayyip Erdoğan.

At a time when a dozen countries comprising more than a quarter of the world’s population are under one or another form of economic sanctions from Washington… we figured the summit’s participants would take a fateful step on the road to a future in which the dollar is no longer the world’s reserve currency.

Instead, Merkel and Macron are meeting in Marseille, France. Supposedly the agenda includes the European migrant crisis and plans for Great Britain’s exit from the European Union.

Meanwhile, Putin and Erdoğan jetted off to Tehran for a meeting with Iranian President Hassan Rouhani — which brings us to the World War III angle. 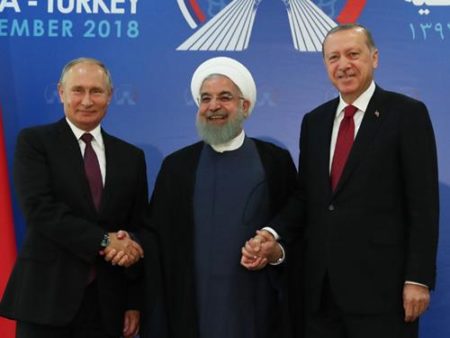 The topic at hand is the multisided civil war in Syria. The regime of Syrian President Bashar al-Assad — backed by Iran and Russia — is planning an assault on Idlib province.

Idlib is the last stronghold in Syria of hardcore jihadis — many of them affiliated with al-Qaida. Turkey has backed those rebels over the years. So have Saudi Arabia and the other Gulf states. And so, at times, has the CIA — on the theory that helping “moderate rebels” in Syria would help knock down the Iranians a peg or two.

The best the three leaders could muster was a statement promising to work “in a spirit of cooperation.”

No doubt. For while they’re on opposite sides of this conflict, they’re keenly aware how Washington, D.C., could easily escalate the conflict to horrendous proportions. To wit…

Washington’s new “special envoy” for Syria, James Jeffrey, is giving his first media interviews… and what he’s saying is ominous.

For starters, Jeffrey says there is “lots of evidence” the Syrian military will launch chemical weapons in the attack on Idlib. Pressed by the Reuters news agency to back up that assertion, Jeffrey simply said trust me: “I am very sure that we have very, very good grounds to be making these warnings.”

In a separate interview with The Washington Post, Jeffrey said President Trump has abandoned his pledge from five months ago “to get out” of Syria and bring home 2,200 U.S. troops deployed there. “The new policy is we’re no longer pulling out by the end of the year.”

Check out this passage from the Post story: “Asked whether Trump had signed off on what he called ‘a more active approach,’ Jeffrey said, ‘I am confident the president is on board with this.’”

Recall we introduced you to Mr. Jeffrey yesterday as a key piece of supporting evidence for what we call the Unified Trump Theory — which posits that Trump will do whatever the Deep State tells him from now on, lest he face prosecution for campaign-finance felonies once he leaves office. (Yes, we got quite a bit of reader response, which we’ll share below.)

Jeffrey was one of dozens of ex-government officials who signed open letters during the 2016 campaign labeling Trump unfit for the presidency. To the best of our knowledge, he is the first among that group to obtain a post in the Trump administration.

Jeffrey is a card-carrying neoconservative — deputy national security adviser under Bush 43 and more recently a fellow at a leading pro-Israel think tank in Washington. For the neocons, Iran is Public Enemy No. 1 — and as such, his ally in Syria, President Assad, has to go.

They don’t think to answer the question, “And then what?” — even though the obvious answer is that those head-chopping Islamic militants, er, excuse me, “moderate rebels” would swiftly take over the joint.

It’s Jeffrey’s chemical weapon comments that have us worried, because it’s once again raising the prospect of direct confrontation between Washington and Moscow.

Is there any doubt we’re being set up for a rerun?

The episode earlier this year was especially fraught with danger. In the initial planning, some of the targets were near locations where Russian troops were deployed and Moscow controlled the airspace. Even worse, National Security Adviser John Bolton — a neocon fellow traveler from way back — wanted to target Russian positions directly.

If you hear news in the next few days about a chemical weapon attack in Syria, you might want to reread this episode of The 5 for context you won’t hear from the media. Oh, and you might want to check out our episode published just hours after the 2017 airstrikes — with background neither Trump nor his Deep State opponents (blackmailers?) want you to know.

To the markets — where it’s wages, not war, that has traders tensed up.

It being the first Friday of the month, the Labor Department is regaling us with the monthly job numbers. The headline figures were fine — 201,000 new jobs for August and an unemployment rate of 3.9%.

But it’s the “average hourly earnings” figure getting all the attention — jumping 0.4% month over month and 2.9% year over year. As happened earlier this year, traders are fretting that rising wages will fuel rising prices, which will spur the Federal Reserve to “tighten” monetary policy further.

It was a similar unexpected jump in wages that touched off the big market drop in February. It took nearly seven months for the S&P 500 to regain its late-January highs.

» Unemployment addenda: The number of Americans 16 and over classified as “not in the labor force” is now a record-high 96.3 million. Granted, the population keeps growing and the baby boomers keep retiring… but the number’s up 2% in two years. Meanwhile, the real-world unemployment rate from Shadow Government Statistics is now at a nine-year low of 21.2%.

At the moment, a rerun of the February swoon is not in store — but the Dow shed 100 points on the open this morning.

As we write, that loss has been shaved to 54 points and the Big Board is back above 25,900. The S&P 500 is down fractionally, while the Nasdaq is in the green — a welcome respite from the sell-off in tech this week.

» Aside from the job numbers, the Street buzz is about Tesla CEO Elon Musk, who consumed both weed and whiskey last night during a livestreamed podcast. This morning brings word both the chief accounting officer and HR boss have quit. (The accounting dude was there only a month and said the “level of public attention” on the company was more than he bargained for. Heh…) At last check, TSLA shares have sold off 6.7% to five-month lows.

The dollar rallied and gold sold off on the heels of the wage numbers, but gold is still hanging tough just below $1,200. Crude is selling off again, a barrel of West Texas Intermediate down to $67.14.

Cryptocurrencies are stabilizing after an abrupt sell-off this week triggered by news that Goldman Sachs won’t be launching a crypto trading desk after all. Bitcoin is at $6,436.

And now a 5 business travel alert: “The TSA’s Plastic Screening Trays Are the Dirtiest Part of the Airport,” reads the headline of an article by Zuri Davis at Reason — with more germs than the toilets.

“Researchers swabbed various surfaces at the Helsinki Airport in Finland, looking for lingering respiratory viruses. The study, reported in the journal BMC Infectious Diseases, found that ‘plastic security screening trays appeared to pose the highest potential risk’ of communicating viral ailments such as the common cold.”

Viruses turned up in half of the trays, while there was no trace of viruses in the toilet bowls! 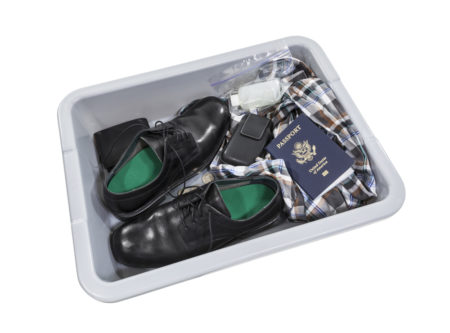 Don’t let the dog take a slurp from here…

“Although the study was conducted in Finland,” Davis goes on, “the conditions are presumably similar in security lines overseen by the TSA. Thanks to U.S. regulations, handling screening trays is unavoidable for travelers carrying stuff in their pockets, traveling with toiletries or wearing shoes, belts, hats or jackets.”

“Dave, I think you’re onto something with your Unified Trump Theory,” writes one of our regulars. “That so-called bombshell Op-Ed in The New York Times reeks of Deep State subterfuge.

“My bull$#!+ detector is telling me a) the anonymous #NeverTrump insider doesn’t exist and b) the story is a smokescreen for the exact kind of agenda you described.

“By the way, the fact that The Donald signed an ungodly omnibus spending bill in May supports your theory. Even if it included things that enable him to fulfill campaign promises, he helped Congress foist $1.3 trillion of profligate spending and swamp slime on us.

“Anyway, here’s to the ‘paper of record.’ Even compared with the rest of the MSM, they are quite a piece of work!”

“Dave, your theory falls apart,” a reader counters, “on account of the fact that a candidate paying hush money with personal funds, not campaign funds, is not breaking any laws. This, as professor Alan Dershowitz and others assert, by challenging dissenters, ‘Show me the statute’

“So you’d have to come up with another ‘hammer.’

“Late developments, furthermore, are likely to blow up the faction of the Deep State residing in the DOJ. The Coward represents a Hail Mary pass that is going to flare out like Booker’s ‘I’m Spartacus’ moment.”

The 5: You can cite Dersh’s arguments all day long and it might not make a difference in court.

“Increasingly, campaign finance laws now illustrate the classic situation where the government can always get you for something — it’s just a question of what they’ll get you for,” writes Bradley Smith, a former Republican chairman of the Federal Election Commission.

It all hinges on the law’s use of the terms “campaign expenses” and funds intended to “influence an election.” And they’re not the same thing.

P.S. One more brief item from the mailbag: “Since when have you taken sides in this Trump drama? Tell me, please, you’re not another Trump-licking dog.”

What in the world did we say yesterday to convey that impression?

Rest assured we continue to look upon the D.C. circus as we always have — with dispassion, contempt for power-seekers of every stripe and a sense of bemusement.

It disturbs us, however, that so many people are just looking for something to be offended about. Makes us think there’s something to the talk about a “New American Civil War” brewing.

But that’s a subject for another day…