“In any business negotiation, the customer is always right,” says economist and trader Stephen “Sarge” Guilfoyle at his blog Real Money. “I learned that as an 11-year-old paperboy…”

“Guess what?” Guilfoyle continues. “In the realm of global trade, the United States is an extremely desirable customer. In fact, for most, we are their best customer.

Once again, we refer to Betteridge’s law of headlines that says “Any headline that ends in a question mark can be answered by the word no.”

We believe the same applies to Guilfoyle’s questions above. And below….

“Think EU manufacturers can afford to sell substantially fewer vehicles inside U.S. borders? Of course not.

“The winner,” says Guilfoyle, “as always in tense negotiation, will be the one that the other side believes will walk.”

While he concedes China and the EU might be allowed to win face-saving skirmishes along the way — in the long run — the U.S. will come out on top.

“But first,” Guilfoyle says, “there will be blood.”

Which the mainstream inevitably gets it twisted….

“What most surprised me about the new trade war was not that it started,” says Jim Rickards, “but that the mainstream financial media denied it was happening.”

The first shots of the new trade war started in January when Trump tested the waters by slapping tariffs on solar panels and appliances, mostly from China.

“Early headlines said that Trump was bluffing and would not follow through on the tariffs,” Jim says.

Jim continues: “Later headlines said that China was just trying to save face and would not retaliate.

Jim says: “Today the story line is that the trade war will not have a large impact on macroeconomic growth.”

On every score, the MSM have gotten it dead wrong.

Jim says they’d do well to keep something in mind…

“The easiest way to understand the trade war dynamics is to take Trump at his word,” says Jim. “Trump is not posturing or bluffing.”

In other words, Trump’s not the most nuanced individual… heh.

“He will agree to trade deals,” Jim says, “but only on terms that improve the outlook for jobs and growth in the U.S.”

“That may not be popular among the elites, but that’s how he sets policy.”

“He does not care about global supply chains or least-cost production. He cares about U.S. growth, and one way to increase growth is to reduce the trade deficit.

“That makes Trump’s trade policy a simple numbers game rather than a complicated multilateral puzzle,” Jim says. Ultimately, if the U.S. can gain jobs, the rest of the world be damned.

So which countries are causing the U.S. trade deficit?

Taking a glance at the following chart… 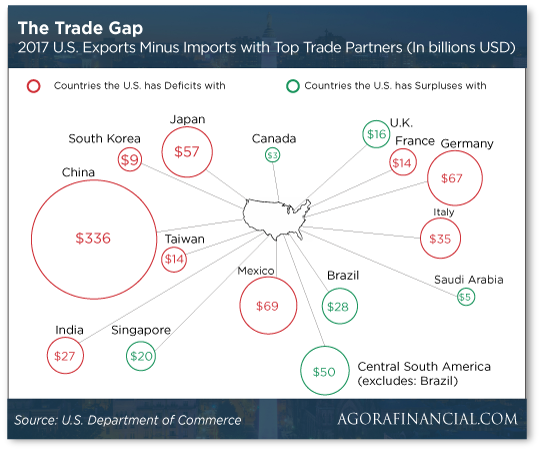 “The U.S. trade deficit is due almost entirely to four trading partners: China, Mexico, Japan and Germany,” Jim says. And this is staggering: “China is 64% of the total.

“President Trump just concluded a new trade deal with Mexico that benefits both countries and will lead to a reduced trade deficit as Mexico buys more U.S. soybeans.

“The U.S. has good relations with Japan and much U.S.-Japanese trade is already governed by agreements acceptable to both sides,” Jim says.

If you’re keeping track, that leaves China and Germany, which Trump euphemistically calls Europe or EU. (Heh… maybe Trump has a few layers after all.)

“Therefore,” Jim says, “the global trade war is not global at all but really a slugfest between the U.S. and China, the world’s two largest economies.

“This reality and the gravity of the situation are beginning to sink in even to the most Pollyanna-ish rookie journalists.

“Even China is slowly coming to the realization that the trade war is real and here to stay,” Jim says.

“Senior Chinese policymakers are beginning to refer to the trade war as part of a larger strategy of containment of Chinese ambitions that may lead to a new Cold War,” he says.

“This trade war will not end soon,” Jim says, “because it’s part of something bigger and much more difficult to resolve.

“This is a struggle for hegemony in the 21st century.

“The trade war will be good for U.S. jobs but bad for global output,” Jim concludes.

As for the stock market: It’s ”just waking up to this reality.

“The currency wars and trade wars are set to get worse,” Jim says. “Investors should prepare now.”

He’s revealed a powerful financial tool in Project Prophesy that’ll give you an edge and take your investments to the next level.

Check out the details here so you can get started right away. The deadline’s TOMORROW at midnight.]

To the markets, where it’s pretty meh on this gray, muggy day in Baltimore…

“To be sure, Amazon has been a major force in the retail market, providing easy online shopping and free shipping to consumers, and putting many traditional retail companies out of business (or under severe stress) in its wake.”

This trend’s resulted in investors piling into Amazon and selling off other retail stocks.

“In fact,” Zach says, “many aggressive traders have been selling short when it comes to retail stocks.

“We’ve talked about this strategy before, where traders borrow shares, sell them at a high price and hope to buy them back cheaper when the stock falls.”

But that was just a phase — betting against retail stocks is not a good idea now.

“Today,” Zach says, “the retail companies that are left have learned to play Amazon’s game.

“Some companies list their own products on Amazon’s website, paying a commission but still bagging those coveted consumer dollars.

“Other companies have matched Amazon’s free shipping offers, or created unique products that only they can provide,” says Zach.

As retailers refuse to roll over — and that’s unexpected — short sellers might be left holding the bag.

“And the more these stocks advance,” Zach says, “the bigger the losses for the short sellers.”

Traders who shorted retail stocks are being cornered into buying back shares before losses get worse.

“Often,” Zach says, “a short squeeze can send stocks sharply higher — many percentage points over the course of just a few days or weeks.

“And that’s exactly what we’ve seen in many of our most profitable retail plays this year.

“There’s still a lot of skepticism when it comes to this sector,” Zach says, “And that works to our favor as we enter the prime holiday season!”

“The next wave of pot profits will be powered by the enterprising trend of mergers and acquisitions over the next few years,” says America’s premier pot stock expert Ray Blanco.

“Pot companies are looking to purchase stakes in companies that could facilitate their own processes more efficiently,” he says.

For example: “A large flower (pot) producer wants to buy an edible business. A major dispensary wants to buy a distributor or flower grower, as would a CBD maker.

“Vertical acquisitions represent smart business by pot companies,” says Ray. “And they’re the ones you want to target as a market player.

“There are few other things you need to look for in a good vertical M&A,” Ray says.

“Traditional fundamentals matter a lot more today than five years ago in pot,” he notes.

Here’s what pot investors should look for:

As for marketing: “A good M&A capitalizes on tapping an underserved market, be it on the consumer side or production side,” Ray says.

“This means a new dispensary in an underserved retail market,” he continues. “Or creating solutions to increase efficiency and reduce cost along the production chain for other companies in the industry.”

“If a deal passes all these eye tests, you have yourself a golden opportunity in the making.”

“Miners in Western Australia say they have discovered two huge gold-encrusted rocks that are each estimated to be worth millions of dollars,” the BBC reports.

The larger of the two weighs in at 210 pounds and is believed to contain almost 2,400 ounces of gold. 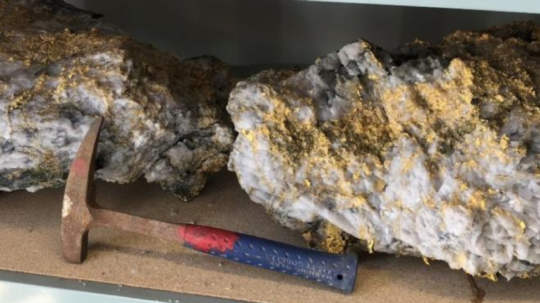 One miner described the find as “exceedingly rare.”

“People do still record finding nuggets in the gold fields, but typically they are less than several ounces,” says Professor Sam Spearing, director of the Western Australia School of Mines at Curtin University.

These “nuggets” — valued at about US$6 million — can hardly be described as such. More like boulders…

“Miners in Australia often extract as little as 2 grams of gold per tonne of rock,” says the BBC.

In this case, RNC Minerals unearthed 2,200 grams per tonne.

“The Beta Hunt mine” — where the gold was found — “had primarily been running as a nickel operation until last week’s discovery.”

The gold was retrieved 1,600 feet underground.

Too big for cufflinks… so maybe paperweights?

But it goes away TOMORROW at midnight.