“In just a few weeks,” says Alan Knuckman from the CBOE trade floor, “we’re going to witness a stock market event seen only twice in the last 20 years.”

No, he’s not talking about a market crash… although things could get choppy on Oct. 1.

“I’m talking about the creation of a brand-new market sector,” Alan says.

It’s not a new sector, per se; rather, telecommunication services will get an updated moniker: communications services.

But it’s way more than just a name change: “It will encompass new media companies currently housed in the technology, consumer discretionary and telecom sectors.”
Did you get that?

Companies will be pulled from three other sectors and grouped under the communications services sector.

As it stands, S&P 500 Index companies are grouped into 11 stock sectors.

The system breaks companies into sectors according to their primary purpose and serves as a nifty shorthand for investment professionals and investors. 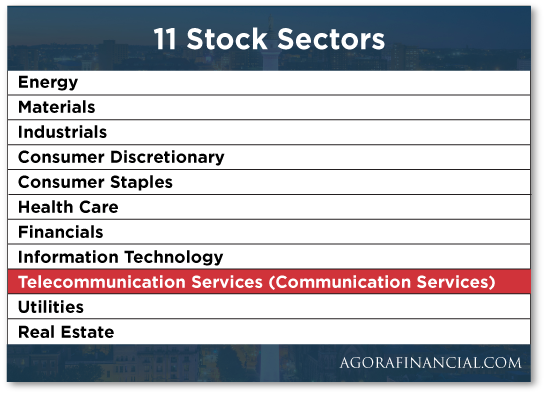 The last time a major change was made to GICS happened in 2014 when real estate was added to the list of sectors.

This time around, the ol’ switcheroo will take place after the closing bell on Friday, Sept. 28, and companies will be shifted to the spiffed-up communications services sector on Monday, the first day of October.

Alan asks: “Why the change?”

“The market has seen major consolidation over the last 20 years.

“Not only have many companies diversified their businesses well beyond their original classification,” he says, “some sectors have completely lost their relevance.”

(Ahem… This is awkward. He’s talking about you, telecoms.)

“The company started out as a tech company simply serving up web search results,” Alan says. “But now it generates more than 85% of its revenue selling ads across multiple platforms.

“It also owns YouTube, the world’s largest video repository — and offers users a live cable TV package over the internet.”

“Any way you slice it,” Alan says, “U.S. stock market sectors need a refresh… and change is coming soon.

“In this month’s comm services breakout, some big names will be making a move.”

Zuckerberg’s Facebook and Google are two behemoths that will be lumbering out of the tech sector and into communications services.

Also — and this one’s interesting — The Walt Disney Co. and Netflix, which make up almost 10% of the consumer discretionary sector, will be moving on.

“At the same time,” he continues, “the consumer discretionary sector will have less emphasis on traditional media, while the technology sector will lose some of its internet highfliers.”

When the dust settles, three of the four original FANG companies — Facebook, Netflix and Google (Alphabet) — will have changed stock sectors.

And that means the S&P 500’s weighting will change dramatically. Communications services alone will go from 2% to 10.1% of the total index.

Take a look at the chart below, a sort of before and after of the S&P 500: 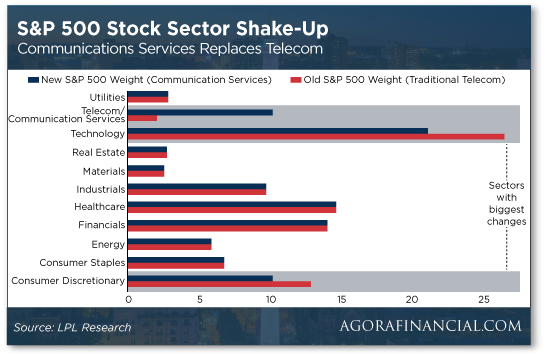 Overall, 8% of S&P 500 companies will be shifting to the newly madeover sector. That’s historic and has implications beyond a simple name change.

“Mutual funds and ETFs that track indexes will need to rebalance their holdings,” Alan notes. “We’ll certainly see some volatility….

“That means pure-information tech funds will be dumping their shares of Facebook and Alphabet, while comm services funds pick them up.

“They won’t trade cheap for long, though!”

If you sense there might be some trading possibilities with all this buying and selling, you’re absolutely right. Our team is scoping them out as we speak. Stay tuned as we get closer to the end of September.

To the markets, where gold’s making a move…

Another commodity — oil — continues its climb, too; a barrel of West Texas crude’s selling for $70.62.

Wholesale prices slipped 0.1% in August. Economists were expecting a jump of 0.2%. This is the first time the producer price index has fallen in 18 months.

The question now is whether this sudden deceleration will extend to the household level. We’ll know once the consumer price index is released tomorrow.

The implosion of the Turkish lira has caused hyperinflation, stocks to crash and bond yields to skyrocket.

“This domestic crisis has the potential for global contagion,” Jim says, “because Turkey has almost $500 billion in dollar-denominated external debt, which it cannot pay if exports and tourism dry up.”

Add to that the U.S. and Turkey are tangled in a trade war, in part because Turkey’s detained a U.S. pastor and refuses to free him.

“Other clashes are emerging within NATO while Turkey is warming up to Russia and Iran with regard to its interests in Syria,” Jim says.

“In short, the Turkish economy is a mess and relations with the U.S. are near an all-time low.

“Still, Turkey has one more rabbit to pull out of its hat,” Jim says.

“President Erdoğan has now declared his goal of abandoning the U.S. dollar in Turkey’s commerce with its trading partners.

“Erdoğan sees a way to buy and sell with Russia and China in rubles or yuan,” says Jim. “Turkey has also been stockpiling gold, which it can use to settle balance of payments deficits and to back up a new currency, if needed.

“Pursuit of these nondollar alternatives suggests it’s just a matter of time before Turkey closes its capital account and reneges on its dollar-denominated debt.”

On its own, Turkey isn’t a big-time global economy. But it could tip over the first domino in the trend towards de-dollarization.

“Just as debt default is contagious,” Jim says, “rejection of dollars can be contagious.

“Turkey is reeling now but may have the last laugh if its nondollar plans catch on.” 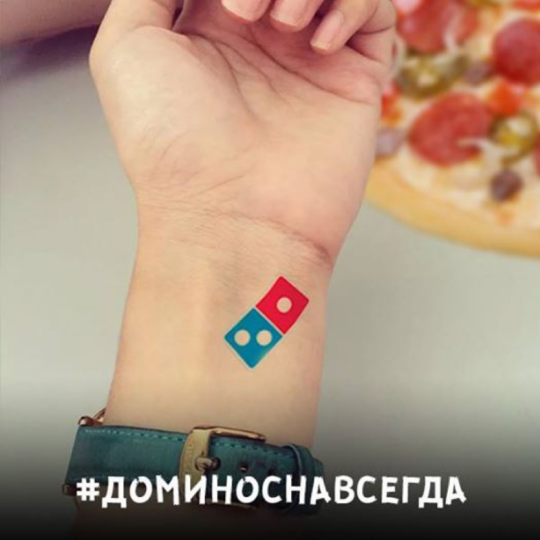 “The post says people who get tattoos will be given a certificate offering a maximum of 100 free pizzas, per year, for a century – a possible 10,000 pizzas,” the BBC reports.

We’ll take their word for it…

Of course, you’d have to live well beyond the notoriously low average Russian life expectancy — just 70.91 years in 2015.

“Nevertheless,” says the BBC, “Russian social media was soon awash with hundreds of people looking to take advantage of the deal…

The pizza chain posted an anatomical image showing the — ahem — “visible parts of the body” where tattoos were eligible for the offer. (Including the face. The face!)

Even with the new rules, Domino’s-themed tattoos kept popping up on social media.

Domino’s hit the brakes on the giveaway as they reached the 350-participant limit. (Must’ve been in the fine print.) But people continued posting pics of Domino’s tattoos on social media. (People are strange…)

The “lucky” 350 winners received the certificates for free pizzas; since winners are entitled to 100 free pies a year, that’s one every 3.65 days.

Winners would do well to remember: A moment on the lips, forever on the (tattooed) hips.

On our main topic yesterday of corporate cash, a reader says: “Lately I have been thinking about all the actions corporations are taking… as they repatriate their cash from overseas: M&As, dividend increases, share buybacks, etc.

“What I find interesting is nowhere have I seen or heard anything about corporations ponying up some of these funds to bolster their underfunded pension plans.

“I wonder how much of this cash would come home if the recent tax bill had required them to fund their pension plans before embarking on these other uses of cash. Unfortunately, we may never know.”

“That’s why we desperately need justice reform. The present probes demonstrate how our present system runs afoul of the equal treatment before the law we are all supposed to believe in.”

As to what Elon Musk inhaled on the Joe Rogan podcast: “Does anyone know for sure what he was smoking?

“It could have been anything flammable so I wonder how they would go about doing an investigation let alone a prosecution. Just saying.

“Is it because of the new circus in D.C. that there seems to be zero talk about the war on cash?” a reader asks.

“Or did electronic payments surrender and the war is over and cash is still king?

“My Benjamins still seem to be working just fine.”

The 5: Well, now that you mention it…

“Cashless commerce” is a thing — particularly with the hipster set.

Several restaurant chains that will not take cash are popping up across the country, perfect for those who’ve ditched greenbacks in favor of a card or a phone.

Businesses who’ve gone cashless gush about the results; plastic reduces errors and the need for accounting. (The complex task of making change, for example.) And it reduces wait times in lines.

Don’t believe cash is running out of time? ATMs are disappearing and cash transactions dropped 7% between 2010 and 2015; card transactions rose 50% during the same time.

Cash isn’t dead yet but it’s on the ropes.

You’ll understand when you watch this free demonstration based on brand-new research.

But you don’t have much time…At midnight tonight, special access to this opportunity will be pulled from the web. No exceptions.

So this is your last chance to snag it before it goes offline.