Corporate America Is In No Rush To “Come Home”

“This whole business about a wave of offshore earnings coming back and helping the economy? It’s complete nonsense.”

Last October, two months before passage of the Tax Cuts and Jobs Act, our Jim Rickards went on TV… and dumped a bucket of cold water on Fox Business anchor Stuart Varney.

One of the law’s major provisions is an incentive for corporations to “repatriate” cash on their balance sheet that’s “stranded” overseas. For years, companies kept their foreign profits parked in their foreign subsidiaries; if they brought that money home, they’d end up paying the highest corporate income tax rate in the developed world. Now that’s much less of an issue.

How much cash are we talking about? Estimates vary. We’ve seen $1.4 trillion, we’ve seen $2.7 trillion.

When Donald Trump touted the law’s benefits to corporate execs last month, he juiced the figures even higher: “We expect to have in excess of $4 trillion brought back very shortly… Over $4 [trillion], but close to $5 trillion, will be brought back into our country. This is money that would never, ever be seen again by the workers and the people of our country.”

Yeah, not so much.

Nine months after the law’s passage, The Wall Street Journal has a front-page story this morning that says corporations are moving “cautiously” in bringing the money home.

The newspaper analyzed filings from 108 publicly traded companies that account for the bulk of corporate profits held overseas. Out of an estimated $2.7 trillion in overseas cash, the amount of money that’s been repatriated is… $143 billion. About 5.3% of the total.

And about two-thirds of that total comes from only two companies — tech giant Cisco and biotech giant Gilead.

Meanwhile, the Journal says, “More than a dozen large companies, including General Electric Co. and Boston Scientific Corp., have said they don’t need past foreign earnings in the U.S. or have no immediate plans to bring cash home. Far more are waiting or won’t say.”

That includes the biggest cash holder, Apple, which makes only vague promises about bringing the money home eventually. 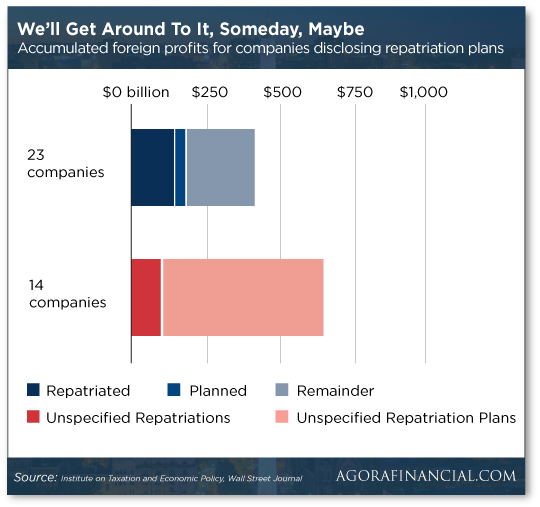 But you shouldn’t be surprised.

Back to Jim’s interview with Stuart Varney nearly a year ago, cited here in The 5: “First of all, the money’s already here. If you’re an Irish subsidiary of Apple… you can buy Treasury notes, [U.S.] stocks, etc., to your heart’s content. You think it’s in $100 bills in a vault in Dublin? No.”

Even some mainstream analysts could figure it out at the time: “The foreign designation of the accumulated earnings in question only denotes the tax residence of the balance sheet on which they are recorded — not where the money is actually kept,” wrote Martin Sandbu in the Financial Times. “Nothing stops the foreign subsidiaries of U.S. companies placing the money in U.S. assets.”

More from today’s Journal piece: “Companies use much of the repatriated money to buy back shares. A study by Federal Reserve economists of 15 companies with the most foreign cash found an uptick in buybacks and little evidence of an investment surge.”

As we said a year ago, if a company really wants to open a new factory and hire new people, it already has access to gobs of cash — because it can borrow at interest rates that are still extremely low by historical standards.

[Ed. note: What’s Jim’s next big forecast? Better yet, how can you profit from it?

Jim recently took part in a very different interview — revealing a trading system he had to keep under wraps for 15 years. Now he can reveal all… and it could be worth thousands of dollars to you. Follow this link to watch.]

To the markets, where traders are yawning at the latest trade war developments.

The on-again, off-again talks with China might be off again — we emphasize might; everything is rumor and innuendo. But the Dow, the index with the most exposure to global trade flows, is up slightly as we write, at 26,171 — the highest since the market’s early-February tumble.

We’re getting our first glimpse into how the economy’s holding up so far in September: New York state manufacturing is still growing strongly, but less than expected, according to the Federal Reserve’s Empire State Manufacturing Survey.

Speaking of the aforementioned Apple, our Zach Scheidt says the company has become boring… and that’s a good thing.

As noted here, last week the company went through its annual ritual of rolling out new iPhones and other products. Gone are the days when these events generated spine-tingling excitement for new breakthroughs — you know, Steve Jobs wowing the audience for 90 minutes before saying, “Just one more thing” — and blowing away even the most hardened skeptics.

“It’s seemingly every year that Apple underwhelms at its own event,” Zach says now. “Although their upgrades to existing technologies like iPhones, Apple Watches, Macs and HomePods are nothing short of engineering marvels, these incremental changes aren’t very exciting to investors.”

Zach likens it to his life at home last week, when he was super busy and opted for an “easy” dinner option once too often. The cry from his twins: “But Dad! I’m tired of eating spaghetti for dinner!” People are tired of the same iPhones.

Spaghetti-level boredom notwithstanding, Zach’s outlook for AAPL’s share price is, “It will go higher. Much, much higher.”

That’s impressive considering we spotlighted AAPL among three free stock picks in The 5 at the end of 2015… and it’s up 108% since then.

Why’s it still attractive? “The story of Apple doesn’t need to be about ‘what’s next,’ as is the case with many other shallower companies,” Zach explains. “That’s because Apple has strategically built an ecosystem where individual products rely on and complement each other.

“These products are extremely popular among recent consumers and create a moat around Apple’s business. Couple these together and consumers will definitely think twice before deciding to ditch their iPhone.

“That’s why I’m urging all Apple investors to not worry about what’s new and flashy. But instead enjoy the slow and steady growth that Apple is experiencing in not only its iPhone business, but also in the other profitable products that support it.”

Politico published an article on Thursday quoting a senior official at Customs and Border Protection named Todd Owen. With recreational marijuana becoming legal in Canada next month, Owen warned that Canadian pot users, pot industry workers and even pot industry investors are at risk of being barred from visiting the United States.

But reading more closely, the threat sounds toothless: “Our officers are not going to be asking everyone whether they have used marijuana,” Owen said, “but if other questions lead there — or if there is a smell coming from the car, they might ask.” (Would anyone try to cross an international border with the scent of weed wafting from a vehicle?)

And it’s not as if CBP will be cross-checking databases to learn whether a traveler has a pot stock in his brokerage account. The government is very capable of scooping up personal data, far less capable of sifting through that data to achieve its objectives.

Meanwhile, “A pair of new studies from the University of New Mexico have revealed more health conditions that can be effectively treated with cannabis,” says our penny pot stock authority Ray Blanco.

“Researchers at UNM found that ‘patients experienced statistically and clinically significant therapeutic benefits when they used cannabis for symptoms ranging from chronic pain to insomnia.’”

Medical cannabis research has been slow to take off, thanks to the federal ban. “For five decades, the National Institute on Drug Abuse has imposed tight controls over which researchers were allowed access to marijuana for studies — and they almost exclusively provided it to scientists trying to prove pot’s negative effects.

“But with state legalization, scientists finally have access to legal sources of scientifically pure cannabis for research. Scores of innovative companies and universities are putting up the cash to make breakthrough discoveries in cannabis and its incredible potential to cure health conditions related to inflammation and pain.”

Two years ago, the Drug Enforcement Administration announced it would license additional producers of research cannabis. But Attorney General Jeff Sessions has gummed up the works, obstructing the DEA’s review of 26 applications from prospective producers.

Last week, the House Judiciary Committee passed a bill requiring the Justice Department to license at least three more manufacturers, in addition to the one license currently held by a pharmacologist at the University of Mississippi.

“The federal government should not stand in the way of collaboration that can help people live better lives,” says the bill’s sponsor, Rep. Matt Gaetz (R-Florida).

To the mailbag, where we have a couple of random dispatches from the War on Cash.

“Not here in Venice, Florida,” a reader writes. “The restaurants downtown are now charging 3% extra for those charging their dinner. The listed price on the menus is for cash only.

“They claim they were losing money because the credit card companies were charging them 2.5% and they had to get that money back to maintain margins.”

Writes another: “We are having our bathroom redone. I asked if I could charge it and they said yes, but 2.5% would be added to the bill. I paid cash.”

The 5: It turns out that while 11 states have bans on credit card surcharges — including Florida — a Supreme Court ruling last year took some of the teeth out of those laws.

The court found a New York law interfered with merchants’ free-speech rights under the First Amendment. While the court did not strike down the law, the mere act of sending it back to a lower court for review has undercut enforcement in New York and elsewhere.

Visa and Mastercard obviously frown on the practice… but under a 2013 settlement with retailers, they grudgingly go along provided the surcharge is no more than 4%, there’s a sign at the point of sale and the surcharge is itemized on your receipt.

“I gotta laugh,” a reader writes after we observed on Friday that during the next financial crisis people will be feeling “pitchforky.”

“All the pitchforks at major and minor garden supply stores, i.e., Home Depot, Lowe’s, etc., are made in China,” the reader points out.

“Will the populace even be able to afford such luxury items with impending increases in import duties?”

After our latest de-dollarization update on Thursday, a reader writes to ask: “Are you sure European Commission President Jean-Claude Juncker… is not Arte Johnson in disguise?”

The 5: Now that you mention it…

“And it could literally change your financial life — because what it reveals could earn you thousands of dollars a week. Each and every week.”

Jim reveals all in an exclusive new interview. It’s available from now through midnight tomorrow night.