OK, it’s no longer rumor and D.C. scuttlebutt. A new and wider round of U.S. tariffs on Chinese goods is all but a done deal.

We recognize it’s hard to keep track of the trade war headlines from day to day. So many announcements, rumors, plans, comment periods… It’s dizzying.

So here’s a one-paragraph summary of where we stand: At present, the United States and China have imposed tariffs on $50 billion in each other’s goods. Effective next Monday, Washington is imposing a 10% tariff on another $200 billion in Chinese imports. And if there’s no “deal” by year-end, that 10% becomes 25%. As we write this morning, Beijing is responding with new 5–10% tariffs on $60 billion in U.S. imports, also effective Monday.

So far, the market reaction has been muted. All the bad news is already “priced in.”

The Dow is the U.S. stock index with the most exposure to international trade. At last check it’s up a third of a percent on the day, at 26,142 — less than 500 points off the all-time high in late January.

Up till now, the tariffs have been limited to “big ticket” items that consumers don’t buy.

Consumers don’t buy ingots of steel. They buy goods made from steel, and the higher costs of that steel eventually find their way to those goods. But most of the time, the typical American consumer is too busy with day-to-day living — meal prep, bill paying, parent-teacher conferences — to notice the connection.

That won’t be the case with the next round of tariffs. Consumer products will be affected — luggage, gas grills, vacuum cleaners. So will foodstuffs like rice and seafood. It’ll be harder now for folks not to notice.

Which is why we perked up at the following phrase during the presidential tweetstorm that accompanied the $200 billion announcement late yesterday: 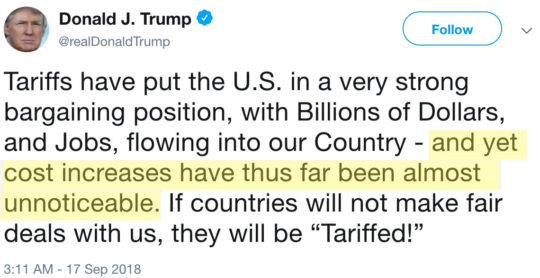 Pay heed to the “thus far” part. Soon price increases will be noticeable. And while consumers will feel a price pinch, there will also be shock consequences for the markets.

If it’s a trade war the president wants to wage, he plans to ask some Americans for wartime sacrifice.

The first “request” came last April when he spoke to a crowd in suburban Detroit. At the time, the stock market was on its heels after touching record highs in January.

“The stock market could have been up 60%, but I have to do things,” he said. “I can’t let other countries take advantage of us. The country is doing much better than the stock market.” The implicit message: Owners of common stocks would have to sacrifice for the greater good.

Then in July, he acknowledged that farmers in the heartland are collateral damage in the trade wars. China responded to U.S. tariffs on Chinese goods by imposing its own tariffs on U.S. goods — including U.S. farm products. But he promised the audience at a VFW convention in Kansas City the wartime sacrifice would be worth it. “Just be a little patient,” he said; ultimately farmers “will be the biggest beneficiary” of his policies.

Our forecast: Donald Trump will expect Corporate America to engage in some wartime sacrifice — eating the cost of tariffs rather than passing them onto consumers.

As you might recall, he doesn’t hesitate to use his Twitter feed to call out industries and even individual companies when they do things he doesn’t like.

Sooner or later, Trump is going to call out the makers of consumer products for raising prices. He’ll say they’re not doing their part to win the trade war. He’ll say they should eat their higher costs to serve a greater good. He might even accuse them of “price gouging” or call them “un-American.”

No, that’s not the sort of thing you’d expect from a Republican president — not in recent decades, anyway. Ronald Reagan and the Bushes at least gave lip service to the free market even if their actions didn’t live up to their words. But Trump is harking back to an earlier Republican president: Richard Nixon imposed wage and price controls in the early 1970s.

Whenever that tweet comes out, it’s going to put the fear of God into the corporate suits at dozens of multinational corporations with huge exposure to global trade flows.

And it will tank those companies’ share prices — at least for a little while. Investors will flee from a free-fire zone in the trade war.

We don’t know how soon that tweet will come. But we’ll be keeping an eye out and try to give you a heads-up.

While the Dow is on the rise today, indexes with less exposure to international trade are up even stronger.

“If you’re still looking to put money to work in the stock market, insurance companies are probably a horrible place to bet on now, right?” says our Zach Scheidt — teeing up an answer you might not expect.

The remnants of Hurricane Florence sit over New England this morning. The damage left behind in the Carolinas is estimated by Moody’s Analytics at $17–22 billion.

And yet “insurance companies typically do not fare poorly after storms like this,” says Zach. “While there will be some turbulence for stocks like Chubb Ltd., Progressive and Allstate, these companies collect plenty in monthly or annual premiums to offset the losses they will cover in the aftermath of this storm.

“So despite the pullback in insurance stocks, I expect these businesses to remain healthy. And as an investor, you can profit from the market’s knee-jerk reaction and buy these healthy stocks at a discount price.”

Cannabis stocks are getting a lift from Coca-Cola.

Yesterday, Canada’s BNN Bloomberg network reported that Coke is in “serious talks” with Edmonton-based Aurora Cannabis to develop beverages infused with CBD — the chemical in marijuana that helps relieve pain and anxiety.

Coke issued a statement that, well, didn’t deny the report. The company took pains to emphasize CBD is not THC, the chemical that makes you high.

“Along with many others in the beverage industry, we are closely watching the growth of nonpsychoactive CBD as an ingredient in functional wellness beverages around the world. The space is evolving quickly. No decisions have been made at this time.” Aurora Cannabis is likewise neither confirming nor denying.

Ray Blanco’s Penny Pot Profits readers are up 223% in less than a year on Aurora Cannabis. It’s well beyond his buy-up-to price now, but he sees several other names in the cannabis sector with equal potential. Check out his latest research here.

Staying in Canada, we… uhhh… well, let’s just reproduce the lede of this story from the Canadian Press newswire verbatim: 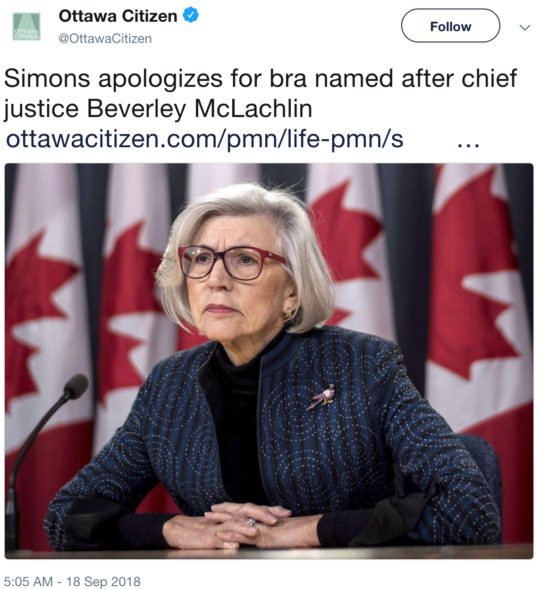 Company president Peter Simons said the concept was to name bras after trailblazing Canadian women. Others he intended to honor in this fashion included suffragette Nellie McClung and author Gabrielle Roy.

But McClung and Roy have been dead for decades. McLachlin is very much alive — she stepped down from the bench only last year — and Simons did not seek her permission before marketing the “Beverly bralette.” When McLachlin learned about it, she was “quite upset” and made a phone call to Simons.

Simons has fallen on his sword: In a company statement, he said, “This initiative was in poor taste, and I offer my heartfelt and sincerest apologies for this inappropriate use of Ms. McLachlin’s name as well as that of other women.”

In a less-rehearsed statement, Simons tells the Canadian Press, “It was a lack of judgment.”

Hey, we’re still in Canada as we begin today’s mailbag with another entry in the War on Cash.

“What,” he inquires, “do you make of this sign posted on the inside door of a CIBC branch in Calgary?” 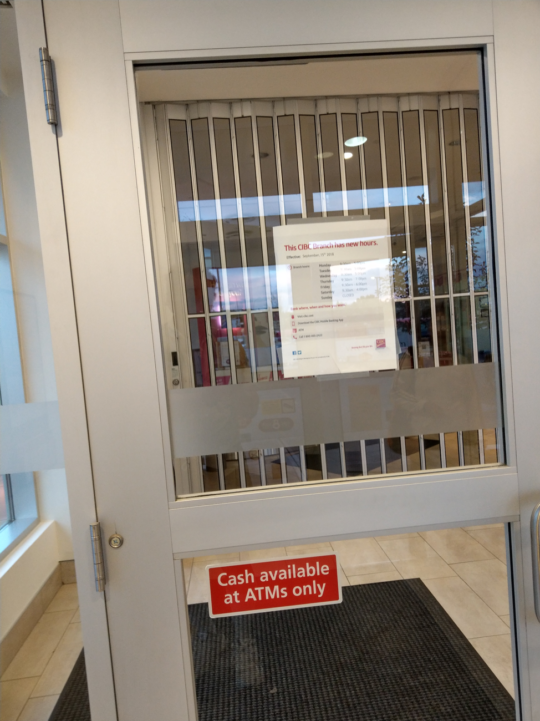 The 5: Hmmm… Our generous interpretation is that the bank doesn’t want to have tellers tied up with people walking in and writing a check for cash. There are older folks who still don’t have ATM cards.

And we have a hard time believing you couldn’t deposit a check in person and get some of the amount back in cash. But who knows. Maybe some more Canadian readers can clue us in…

“Dave, I’m no expert on corporate accounting,” writes one of our regulars after yesterday’s episode — “but with trillions of collective dollars in cash at stake, for the life of me I can’t imagine why anyone expects that money to be repatriated.

“Would that not risk revealing the shady places it has been hidden… er, I mean ‘sheltered’? Most of those are probably open secrets, but it seems to me there’s every reason to keep such information off the books.

“It is a travesty when most nations’ tax codes are so onerous that quasi-legal dodging and evading tactics are acceptable (or good) business practice for corporations that want to be profitable.

The 5: And as we’ve said before, Congress has no one to blame but itself. For years, it refused to lower corporate income tax rates — instead carving out loopholes allowing them to keep their foreign income overseas. Now comes the whirlwind…

P.S. Last chance until further notice: Jim Rickards is revealing all about a top-secret CIA project he led 15 years ago — and how it could allow you to collect up to $15,760 every two weeks.

Sounds crazy, but it all makes sense when he tells you about this classified government document.

We urge you to watch now, because the offer comes off the table tonight at midnight.