“Hey, Dad, are you tweeting about WEED?”

That’s the question Zach’s 16-year-old daughter put to him after reading his Twitter feed:

While Zach wouldn’t recommend recreational pot to his teenager, he had to explain what might seem like a double standard.

His tweet, he says, started “a very interesting conversation with my daughter about ethics and investing.”

Zach believes this conversation pertains to investors who follow his advice for their portfolios too.

Zach posits: “Is it ethical to invest in companies that don’t fit with your moral standards?”

Zach says no matter which side of this question you fall on, he respects your position.

“But here’s what I decided a long time ago when I first started investing at a private hedge fund,” he continues.

“Companies exist for the purpose of making profits,” says Zach. “And passive investors (those of us who simply buy and sell shares of stock) participate in those profits.”

Passive investors don’t substantively shape the way a company operates; it will succeed or fail whether you buy shares or not.

“If I invest in a company that operates in a gray area (according to my moral standards), it doesn’t mean that I’m condoning what that company does,” Zach says. “But it does mean that I will receive some of the profit from this company’s operations.”

When profits are passed on to investors, they’re free to do with those profits what they will.

“I can use the profit to pay for my personal expenses. I can use it to educate my children. I can even donate this profit to a charitable cause that actually benefits society.

“So for most stock investments — even in companies that I may not buy from or agree with — someone is going to be paid the profits,” Zach says.

“It might as well be me so that I can spend those profits for something that I consider to be a good use of capital.”

“We’re not much on socially responsible investing,” says our executive publisher Addison Wiggin, “even when we judge a certain investment vehicle to be thoroughly irresponsible, if not downright reprehensible.”

Zach’s position basically jibes with what our executive editor Addison Wiggin said four years ago at The Daily Reckoning.

A touch more cynical? Sure… but the sentiment’s the same.

“Maximizing profits and conforming to social policies are separate endeavors,” wrote the late Harry Browne in 1995. “You can cater to one endeavor only at the expense of the other.

“Name almost any investment,” Addison says, “and we can come up with a valid objection to it… and not on hippy-dippy ‘save the Earth’ or ‘fair trade’ grounds, either.

“Telecom? All the big companies collude with the National Security Agency’s warrantless wiretapping.

“Consumer staples? Hope you don’t mind General Mills and Kellogg sucking up the corn subsidies for breakfast cereal (and adding to kids’ waistlines, which you’ll pay for years from now when they develop diabetes and go on Medicaid).”

“If government is going to direct more and more of the economy going forward,” says Addison, “it only makes sense to ‘follow the money’ and channel your own investment flows into those areas that will benefit most.”

Back to Harry Browne: “The stock exchange isn’t a pulpit,” he said. “If you want to promote a particular environmental policy, political philosophy or other personal enthusiasm, do it with the profits you make from hardheaded investing.”

The Nasdaq’s still floating above 8,000, up just one point.

“What is left to say about cannabis sensation Tilray Inc.?” says Greg Guenthner.

“No one had ever heard the company’s name until the stock debuted on the Nasdaq in late July,” he continues.

(To be fair, our pot stock expert, Ray Blanco, was onto the company… but we digress.)

When it went public, Tilray’s shares traded for less than $30 and then the stock went parabolic — doubling its price — last month. 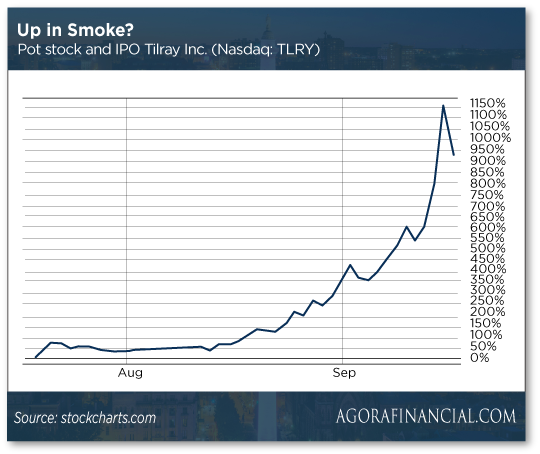 “Tilray stock has now become a day trader’s best friend (or worst enemy, depending on what time you try to sell your shares).

“The stock eventually retreated on Wednesday afternoon and posted gains just shy of 40% by the closing bell,” says Greg. “Shares would then fall another 18% on Thursday to close just below $177.”

Sure, but the thing about bubbles is they can inflate much bigger than analysts expect.

Does that mean Greg’s buying? He says: “While I’m not crazy enough to buy shares at these levels, I’m also not about to declare the rally dead just yet…”

Ray Blanco agrees with Greg — pot stocks can fly too close to the sun — but if you trade like a pro, the world of pot stocks is “fast-paced, exciting and potentially very lucrative.”

Ray concedes pot stocks can be volatile and thinly traded. For that reason: “You should use ‘speculation’ money to buy penny pot stocks. That’s money you can afford to lose.

For that reason, you should never put your family’s financial well-being at risk with any investment strategy, including pot stocks.

On to selling pot stocks: “Pot stocks move fast,” Ray says. “Sometimes a few hours will be the difference between a small gain and a huge gain.”

(See example of Tilray above.)

As America’s No. 1 pot stock expert, Ray promises to give you the scoop on the best stocks in the cannabis space.

“The ideas you receive from me will be direct and to the point,” Ray says, “If I say a stock is looking good, it’s because my research shows this. And if it’s a dog, I’ll pull no punches.

“Having the right information is key to playing pot stocks,” he continues. “And using my research you’ll be able to make the most out of your pot plays.

“Before we wrap things up there’s one more thing we need to cover,” says Ray. “That’s how to get started if you don’t currently have an online broker for trading stocks.” Which might be the most-asked question from would-be investors…

Ray says the brokerage you use is entirely up to you, but he gives a few recommendations while stressing he has no affiliation with any of these brokerage services.

“OptionsHouse and TD Ameritrade recently ranked by NerdWallet as the top two overall online brokers in the year 2017,” Ray says. “Charles Schwab and TD Ameritrade are regarded by reviewers as good brokers for beginners.

Overall, Ray says do your homework and make the best decision for you.

“As public opinion surrounding the marijuana story continues to develop,” Ray says “there will be enormous chances in the markets to make huge gains from the best pot-related companies.”

If you’re interested in getting exposure to the pot market — and trading like a pro with Ray’s guidance — check out his service Penny Pot Profits here. 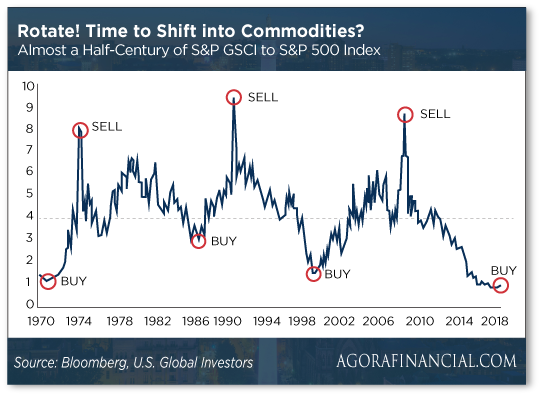 The chart compares the S&P 500 Index with the S&P GSCI.

“Of course, the S&P 500 is well-known,” Byron says. “It’s a stock market index based on the market capitalizations of 500 large companies whose shares are listed on the New York Stock Exchange (NYSE).

“Less well-known is the S&P GSCI. It’s an investable commodity index based on global commodities.”

As of 2017, the commodities that make up the S&P GSCI are divided by sectors:

“The index is designed to be investable by including the most liquid commodity futures,” Byron says.

“Obviously, if you look at the ratio over time, it shows wide swings based on periodic commodity cycles.” says Byron. “And it’s fair to say that we’re at a ‘buy’ signal just now.”

There’s no way to tell, of course, exactly when the trend will turn upward.

“But if past low points are any indication, we’re presently in the bottom basement of the downside, and as you can see by the chart, when the trend starts up again it moves like a rocket,” Byron says.

“Right now we have buying opportunities galore,” he says, “with beaten-down names across the board.”

“About your picture from Calgary,” a reader writes (here’s the pic): 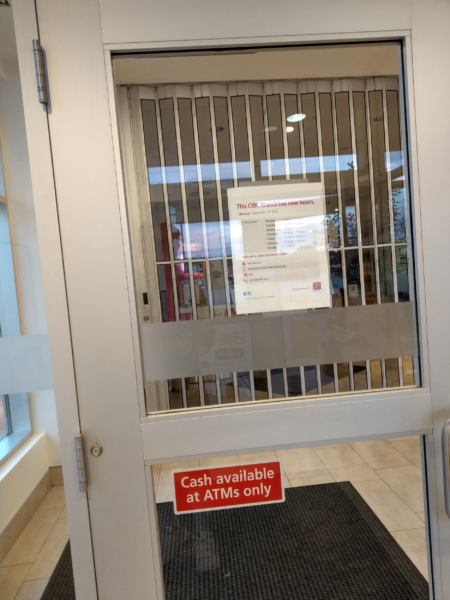 “This became the reality at my own local branch about a year ago. I should really call it a branchlet because it’s exactly what you couldn’t believe, a branch without any teller windows.

“What they have is a couple of ATMs, a desk with an employee to keep an eye on things and several offices for the resident bankers to do banker things in.

“And yes, this is also a CIBC branch, although I wouldn’t be surprised if others are doing it as well.

“I miss seeing the tellers that I had come to know over the years; they were presumably reassigned or laid off. Such is progress…”

Regarding the S&P 500’s index shakeup happening Monday, a reader says: “When you first reported this upcoming event, ANGI Homeservices was one that was highlighted as being in the new communications sector, but in today’s 5 it’s not included.”

The 5: Sorry for any misCOMMUNICATION… heh.

P.S. As the reader noted above, there’s going to be a new S&P 500 stock sector come Monday morning. We’ll see how the markets react… but there’s a high probability volatility will make an appearance. In fact, Zach Scheidt’s anticipating an “income event” as the upshot of the sector shuffle, so make sure to watch your inbox… More Monday!