We suspect the sentence didn’t sound as clumsy in the original Russian. But the tone of the warning to Washington was still unmistakable.

Ryabkov was responding to another round of U.S. sanctions against Russia — the 60th announced since 2011, according to the UPI newswire. (Didn’t Donald Trump campaign on “getting along” with Russia? Or are we onto something with the Unified Trump Theory?)

These latest sanctions are a two-fer, actually — targeting both Russia and China. Washington is ticked with the Chinese for buying Russian Su-35 fighter jets and S-400 surface-to-air missiles. As if Washington would allow the Chinese to buy similar hardware from U.S. defense contractors, right?

And so the arms acquisition unit of the Chinese government “will be denied U.S. foreign export licenses, is banned from making foreign exchange transactions within U.S. jurisdictions and is prohibited from using the U.S. financial system,” UPI reports. Meanwhile, 33 more Russian people and entities have been added to a U.S. Treasury blacklist.

A spokesman for China’s foreign ministry says the sanctions will do nothing to change the strategic cooperation between Moscow and Beijing; if anything, he says it will grow stronger.

“The objective of intelligent diplomacy is to divide one’s foes, not to unite them,” writes the veteran foreign correspondent Eric Margolis — echoing remarks our own Jim Rickards has made from time to time.

Earlier this month, the Russians and Chinese carried out their biggest-ever joint military exercise — involving more than 300,000 troops on land in eastern Siberia and on water in the Sea of Okhotsk and the Sea of Japan.

“Russia and China appear – at least for now – to have overcome their historic mutual suspicion and animosity,” says Margolis. “Vladimir Putin and Xi Jinping attended the grand display, along with their senior military staffs.”

Along the way, the two presidents engaged in a culinary photo op, making the traditional Russian pancakes called blini — topped with caviar and washed down with shots of vodka. 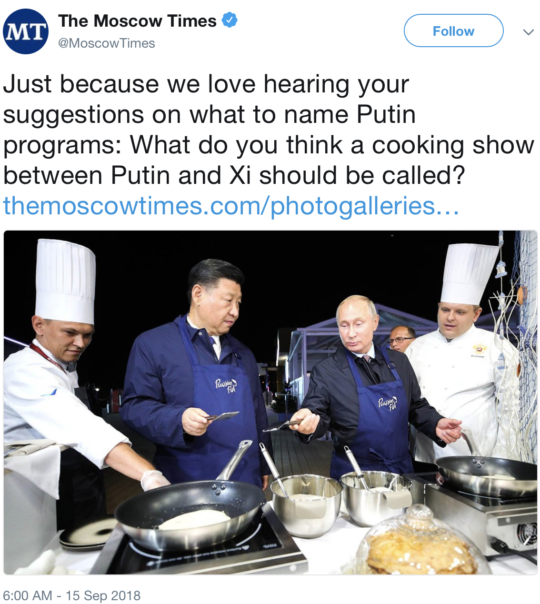 “Beijing and Moscow were signaling their new ‘entente cordiale’ designed to counter-balance the reckless military ambitions of the Trump administration,” Mr. Margolis goes on, “which has been rumbling about a wider war in Syria and intervention in, of all places, Venezuela. The feeling in Russia and China is that the Trump White House is drunk with power and unable to understand the consequences of its military actions.”

Aside from the geopolitical fallout, the new sanctions no doubt reinforce the commitment of Chinese and Russian leaders to “de-dollarization”— the slow establishment of a new financial system that doesn’t depend on the dollar.

“We are already drawing conclusions,” said Russian Foreign Minister Sergei Lavrov on Friday, “doing everything necessary not to depend on the countries that are acting that way [imposing sanctions] with their international partners.

“More and more of our partners in Asia, in Latin America, start to draw the same conclusions [about the U.S. dollar]. I think that this trend will only continue.”

No, it’s not the sort of thing that happens overnight. “You cannot immediately abandon the dollar,” says Andrey Kostin, CEO of VTB Bank, Russia’s second-largest bank. “But if we do not start, we will never come to this, so we need to start now and we are already doing such work.”

The new week begins with the Dow and the S&P 500 pulling back from Friday’s record closes.

At last check, the Dow is down a half percent at 26,600; the S&P is down a third of a percent at 2,920. Reasons? Take your pick: China canceling trade talks… the impending resignation/firing of Deputy Attorney General Rod Rosenstein… the New England Patriots with a 1-2 record for the first time since 2012.

» “The year of the takeover” rolls on: This morning brings news that SiriusXM, the satellite radio outfit, will buy the streaming music pioneer Pandora for $3.5 billion. And in the gold mining sector, Barrick will acquire Randgold for $6 billion — making Barrick once again the world’s biggest gold producer.

Elsewhere, Sears CEO Eddie Lampert is proposing a restructuring to stave off Chapter 11.

Now we’re seeing numbers attached to the S&P 500 switchover taking place at the end of this week — and they’re staggering.

As we’ve been telling you for much of this month, the composition of the S&P 500’s 11 sectors will undergo a major shift — with the creation of a new “communications services” sector incorporating new media giants like Facebook and Google… old media giants like CBS and Disney… and traditional telecoms like AT&T and Verizon.

That means mutual funds and ETFs linked to the S&P’s various sectors will have to buy and sell a boatload of shares in the next few days.

How much? “We estimate that the sector rebalancing in the U.S. could result in turnover of the order of $25–30 billion,” says Matthew Bartolini from State Street Global Advisors, cited in the Financial Times. That’s on top of the usual end-of-quarter rebalancing this week totaling another $50 billion.

The potential for volatility is there, for sure. But Agora Financial income specialist Zach Scheidt is anticipating what he calls an “extreme income event” — giving you the chance to pocket thousands of dollars instantly, literally the moment you act on his trade recommendations.

Curious how it works? Zach reveals all during a special event tomorrow at 1:00 p.m. EDT. You won’t want to miss it. But space is limited, so we urge you to follow this link and secure your spot right now.

The fallen angel of the pot stock space is falling once again. 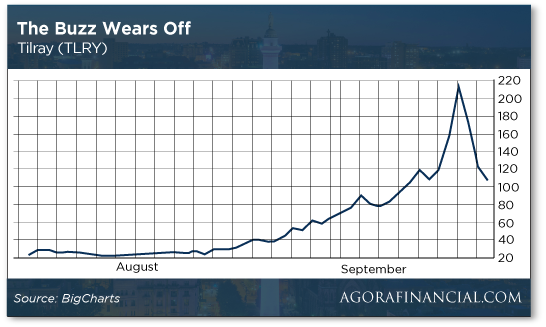 “At certain points near the peak on Wednesday, Tilray became worth more than Twitter,” says our penny pot stock authority Ray Blanco.

“And while many are calling this stock’s valuation crazy, the reality is that lots of transformational industries have experienced crazy prices… until the values of the companies within them caught up. We’re seeing that with cannabis right now.”

So what of the sector as a whole? “I think that it makes sense to be a little more defensive this fall,” says Ray, “but not too defensive — momentum is clearly on our side here. And a spotlight on any single cannabis stock is arguably a good thing for the rest of them.

“Ultimately, I think that mainstream market watchers are going to be surprised at what legal pot companies are worth a year or two from now. But then again, by the time they get in, you’ll already have made a fortune.”

[Ed. note: During the height of the Tilray mania last week, one of Ray’s recommendations was leaving Tilray in the dust. For access to all of Ray’s premium pot recommendations, look here.]

The price of oil paid throughout much of the world just hit a high last seen in 2014.

Hmmm… Typically, oil moves in a direction opposite that of the dollar. Oil collapsed from $110 a barrel starting in mid-2014… around the time the dollar began a strong rally.

But the pattern hasn’t held true this year. Since mid-April, the dollar has rallied about 5%. But oil prices have jumped 12.5%.

The decision came three days after Donald Trump tweeted that “The OPEC monopoly must get prices down now!”

Hmmm… Two possibilities here. One is that like the Chinese and the Russians, OPEC is telling Washington, “You’re not the economic boss of us.” The other, as we’ve suggested before, is that Saudi Arabia is physically incapable of pumping oil at a rate much higher than 10 million barrels a day… and it’s been pumping just above that level for about 18 months.

Oil traders hobnobbing at a conference in Singapore say it’s totally possible that Brent prices could top $100 before year-end.

“The market does not have the supply response for a potential disappearance of 2 million barrels a day in the fourth quarter,” says Daniel Jaeggi from Mercuria Energy Group, quoted by Bloomberg.

In case it wasn’t obvious all along: Donald Trump can have his Iran sanctions or he can have stable oil prices. He can’t have both.

(How does all this fit into the Unified Trump Theory? Hard saying. There are competing factions within the Deep State when it comes to Iran — some of them supporting the 2015 Iran nuclear deal, many others totally beholden to Tehran’s enemies in Saudi Arabia and Israel.)

To the mailbag: “Trump walking back his latest attack on Mueller is somewhat suspicious,”a reader writes after the president ordered certain “Russiagate” documents declassified — only to put the process on hold after the Justice Department and unnamed “allies” objected.

“Why would Trump not try to do something like that, and who could deter him? I think parts of your Unified Trump Theory may be seen here.”

The 5: Yeah, we thought the same thing when we saw the news on Friday.

Meanwhile, pending Senate approval, Trump has filled the last of five vacancies on the Federal Reserve’s Board of Governors that came open during his first two years in office.

There are only seven positions on the board, so Trump had a golden opportunity to overhaul the Fed. Instead, as we’ve mentioned before, he’s squandered it. All his appointments have been egghead academics, career Fed apparatchiks or both.

And so it goes with the final appointment of Nellie Liang, who’s spent most of her career at the Fed and whose “achievements” include developing the bogus “stress tests” for the big banks after the Panic of 2008.

For his part, Fed Chairman Jerome Powell is busy currying favor with Congress and not the White House. Bloomberg reports Powell has called or met with lawmakers 48 times during his first six months in office — compared with 17 such contacts by his predecessor Janet Yellen. The president, meanwhile, is left to fume about how he’s “not thrilled” with Powell’s performance to date…

P.S. We’re less than 24 hours away from what could be the biggest development this year for income investors.

Our own Zach Scheidt calls it an “extreme income event.” Depending on how you play it, you could pocket thousands of dollars before the end of the week.

That’s right, a near-instant payout. As soon as you execute his recommended trades, in fact.

Zach reveals all tomorrow at 1:00 p.m. EDT. Space is restricted, so click here to grab your spot right away.