Europe Moves Toward Ditching the Dollar

All eyes are on Donald Trump at the United Nations today… and all eyes are looking in the wrong direction for the real story.

Trump is addressing the annual gathering of the U.N. General Assembly. Front and center, he lit out against Iran. “Iran’s leaders sow chaos, death and destruction. They do not respect their neighbors or borders or the sovereign rights of nations.”

Iranian President Hassan Rouhani will also speak, so naturally the media attention will gravitate toward those two.

But nothing they say will matter. For one thing, 33 other heads of state are also speaking today.

More to the point, however, is that the real action is happening behind the scenes… Trump is being shut out… and it bodes ill for the dollar’s status as the globe’s reserve currency.

First, the essential background: Last May, Trump announced Washington is walking away from the 2015 Iran nuclear deal. Many of the U.S. economic sanctions against Iran came back into force last month; more, including limits on Iran’s oil exports, take effect in November.

Despite the myopic mainstream reporting, Iran and the United States were not the only parties to the agreement. So were China, Russia, Britain, France and Germany.

The other parties have been keen to keep the deal alive… and they’re chafing at how global trade, largely conducted with U.S. dollars, compels them to go along with the revived sanctions even if they don’t want to.

More than once since May, we’ve cited the pithy words of French finance minister Bruno Le Maire: “The international reach of U.S. sanctions makes the U.S. the economic policeman of the planet, and that is not acceptable.”

There was never much doubt China and Russia would thumb their nose at Washington; as we pointed out only yesterday, Obama and now Trump have performed the improbable feat of uniting the two longtime adversaries in pursuit of “de-dollarization” — a financial system independent of dollar dominance.

But the Europeans? That’s more complicated.

Their economy is closely intertwined with America’s. Getting out from under the “economic policeman’s” thumb is more challenging. Giant European companies have seen the writing on the wall. Peugeot… Renault… Deutsche Telekom… Airbus… Air France… British Airways… They’ve already pulled out of Iran, after going in less than three years ago.

The Reuters newswire had a looong story yesterday in which U.S. diplomats gloated about having the Europeans “cornered.”

“If you decide to do business with an enemy of the United States of America, you will not being doing it with the United States. You will not have access to the U.S. financial system,” said one of the story’s sources, identified only as a “U.S. State Department official.” (Why the anonymity? What’s so hush-hush about this? But we digress…)

But wait: “The remaining members in the Iranian nuclear deal say they will set up a new payment system to maintain business with Iran and bypass U.S. sanctions,” reports the BBC. 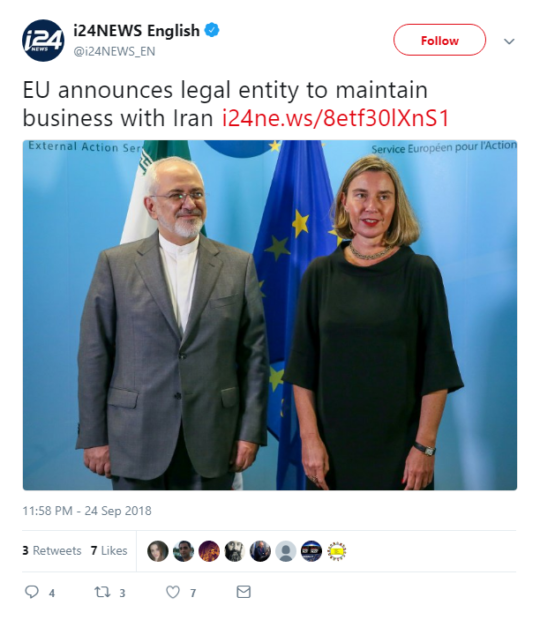 Under a “special purpose vehicle,” the governments of Britain, France, Germany, Russia and China pledge to “protect the freedom of their economic operators to pursue legitimate business with Iran.”

As Al-Jazeera correspondent Shihab Rattansi explains it, “If the Italians want to buy some Iranian oil, they will wire the money to this entity, which will then handle the financial transactions from there and vice versa.

“There will be no involvement of commercial banks and central banks, both of whom are terrified at the prospect of U.S. retribution if they are seen to be going against U.S. sanctions.”

Yes, the details are still fuzzy — but no more fuzzy than, say, Trump’s trade deal with Mexico.

This story isn’t about the details as much as the trajectory. European leaders, forced to choose between the United States on one hand and China-Russia-Iran on the other, are turning away from the “economic policeman of the planet.”

Europe is casting its lot with “de-dollarization” — seeking, in the words of Jim Rickards, “a robust multilateral payments system that is free of hacking, tracking or interdiction by the U.S., and free of U.S. dollars.”

The story has a long arc. We’ll be staying with it all the way…

[Ed. note: If you’re looking to bag some shorter-term profits, Jim Rickards says he has just the thing — a system that could allow you to bag north of $15,000 every two weeks. Click here for an exclusive, time-sensitive interview in which Jim walks you through how it works.]

Banks are leading the way higher on Wall Street today. With rising interest rates — the 10-year Treasury is back to the May highs of 3.1% — traders are betting bank profits will only get better from here.

At last check, all the major U.S. stock indexes are in the green, if not by much.

» Among the companies traders are chattering about — Facebook, down about three-quarters of a percent after the founders of its Instagram unit announced they were bolting. “Creative differences” with Mark Zuckerberg, dontcha know

» Today’s developments in “The Year of the Takeover” include a fashion play — Michael Kors (KORS) buying privately held Versace for $2.1 billion. Meanwhile, privately held Inspire Brands will add Sonic Drive-In (SONC) to its existing portfolio including Arby’s and Buffalo Wild Wings. (They won’t mess with the cherry limeade, will they?)

Gold continues to hug the $1,200 level. Brent crude has pushed above $82, but the West Texas Intermediate variety is little changed at $72.17.

Just over two years ago, short-term Treasury debt carried a negative interest rate. If it was income you wanted, you had little choice but to plow money into the stock market. “TINA” was the expression — “there is no alternative” to stocks.

But no more: Today you can lend your money to Uncle Sam for three months and collect a 2.22% yield. That compares favorably with a 1.74% dividend yield on the typical S&P 500 stock.

What’s more, real interest rates — after inflation — are likely to turn positive tomorrow when the Federal Reserve jacks up the fed funds rate for the third time this year. Real rates have been negative since the Panic of 2008… 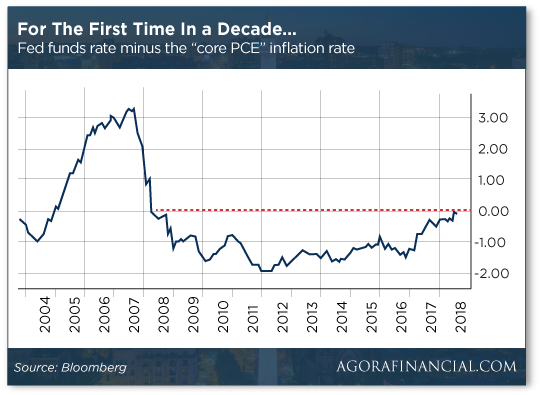 Little surprise money market funds are enjoying their biggest inflows since 2008. And Mike expects that to continue as rates keep rising.

What’s more, “If escalating trade tensions cause a stock market hiccup,” he says, “a modest correction would likely trigger a tidal wave of cash to flow out of stocks and into the relative safety of short-term money funds.”

Home prices are climbing at their slowest rate in nearly a year, according to the latest Case-Shiller Home Price Index.

The July number registered a 0.1% increase for the month and 5.9% for the year. Only a month ago, the year-over-year increase was 6.4%.

Among the weakest markets — Dallas, Boston, Chicago and especially New York, which has now registered four straight months of decline. But Vegas is still on fire — up 13.7% in a year — with Seattle and San Francisco close behind.

Bureaucracy in America: You’d think in the aftermath of Hurricane Florence that law enforcement in Wayne County, North Carolina, would have better things to do — but no.

Before the storm hit, Tammie Hedges — owner of an animal rescue center called Crazy’s Claws N Paws — took in 17 cats and 10 dogs whose owners had to evacuate from more flood-prone areas.

“Our mission was to save as many animals from the flood that we could,” Hedges tells USA Today. “We went through Hurricane Matthew and it was horrible. There were many preventable deaths.”

Alas, she housed them in warehouse space where she was planning to expand — and which hadn’t yet been legally registered as a shelter.

No sooner did the storm pass than Animal Control called Hedges: “He basically told me, ‘You can voluntarily hand over the animals, or I can go get a warrant/’”

So she handed them over… but was still called in for questioning days later and arrested on 12 counts of administering drugs (mostly antibiotics) without a veterinary license and one count of “solicitation to commit a crime.”

“It was all over-the-counter stuff you could literally find at Dollar Tree,” says animal rescue volunteer Raina Nyliram. “She couldn’t get the animals to the vet because the vet was closed. All the charges are bogus.”

The county says it’s working to reunite the animals with their owners. Yeah, we’re sure they’re sparing no effort.

“If they can’t find the owners,” Hedges says, “the pets went from a safe place to a kill shelter.”

“Come on, guys,” begins today’s mailbag — after Jim Rickards’ remarks that “China’s problem is that it will soon run out of U.S. imports to tariff.”

“How,” the reader asks, “is that supposed to matter? Of course they won’t actively devalue the yuan either. They have other options. Yes, besides dumping Treasuries.

“They can play the dotard game and sanction the U.S.

“They can do more bilateral and trilateral currency exchanges bypassing the dollar.

“They can push OPEC to include or move to the petro-yuan.

“They can shut off the rare-earth spigot to the U.S., which is basically Thor’s hammer coming down on U.S. high tech, NASA and the military-industrial complex. No REs equals no new missiles, no Teslas, or most anything high-tech or electronic. China is the ONLY heat-resistant coating supplier to the Pentagon. How awesomely stupid is that?

“China could do exactly what the U.S. wants but exclude the U.S. from it. Basically open their markets, including financial to the world, but minus the U.S. Just slam the door shut on the U.S. sectors. The rest of the world (including allies) won’t care, because they pick up the win.

“BTW: China’s insistence on companies sharing technology for access to the Chinese market? Nothing wrong with that. It is China’s sandbox, and if U.S. companies want to play in it, then they have to play by China’s rules. Don’t like that? Then stay in your own sandbox and sulk…”

“Hey, Dave,” a reader writes, “as a self-appointed outspoken critic of President Trump in general and his appointments to the Federal Reserve specifically, you should appoint yourself to that group, what with your vast financial acumen, and free yourself from your usual task as chief shill for the ever-burgeoning Agora publications (which I love, by and large, BTW).”

The 5: Why would I want to be appointed to a body I wish to see abolished? Heh…

P.S. Really, I’d settle for half a loaf: When Ron Paul sought the GOP nomination for president in 2012, he said he’d nominate Jim Grant, the bow-tied and erudite editor of Grant’s Interest Rate Observer, to be Fed chairman.