Here It Comes: More Pain at the Pump

What are we to make of a headline like this? 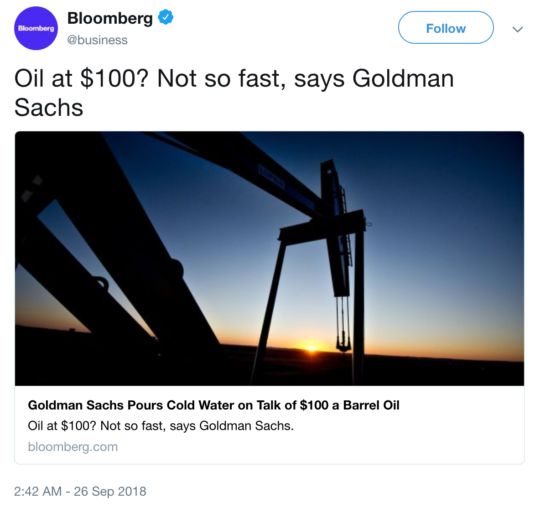 On Monday, we mentioned that oil traders at a conference in Singapore were talking about $100 a barrel for Brent crude, the global benchmark. Brent crested the $82 level this week. (The American benchmark, West Texas Intermediate, is much cheaper — around $72.)

But Goldman’s analysts say they “expect Brent prices to stabilize back in their $70–80/bbl range into year-end.”

We don’t trust the vampire squid’s forecasts as far as we could throw them. You can never dismiss the possibility of a hidden agenda.

Recall that in 2007, as the housing bubble was ready to burst, Goldman was selling mortgage securities to clients without disclosing an important fact: The only reason those securities existed was because hedge fund king John Paulson wanted to short the hell out of them. Goldman go-getters would send each other internal emails bragging about the “sh**ty deal” they just made.

Meanwhile, two of our top experts — who couldn’t be more different — agree that crude prices are heading higher.

Despite their differing approaches and temperament, they both see oil moving in the same direction — up.

“Back in the beginning of the year,” Alan reminds us, “when oil was around $60 per barrel and everyone thought it was going to come crashing down… I predicted $75.” (To be clear, he’s talking about WTI here, not Brent.)

We touched that $75 level, however briefly, in July.

“Now,” says Alan, “question is… does oil still have what it takes to climb higher?” 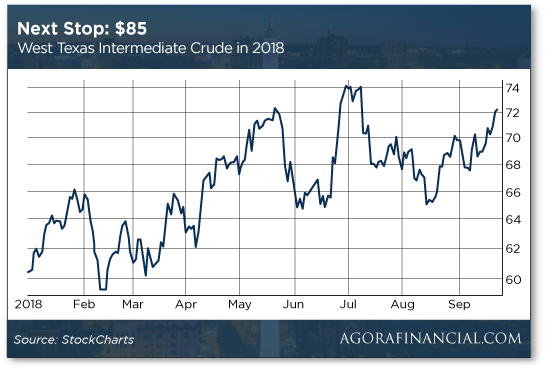 “Oil prices are stable and trending higher,” says Jim Rickards — looking through the prism of geopolitics.

“The three largest oil producers and exporters in the world are Saudi Arabia, the U.S. and Russia,” he reminds us. “Each country produces about 10 million barrels of oil per day and collectively the three countries produce about 37.5% of all the oil in the world. OPEC’s influence on world oil prices is quite limited compared with the impact of the Big Three when they set price or output targets.

“President Trump has been calling for more oil output from Saudi Arabia to make up for his new embargo on purchases of oil from Iran, which produces 4 million barrels per day. But Saudi Arabia and Russia stand to gain more from higher prices than from higher output.”

Over the weekend, Saudi Arabia and Russia agreed to leave output at current levels — U.S. sanctions against Iran be damned.

“In effect,” says Jim, “these two oil giants are calling Trump’s bluff and saying that the U.S. should increase its own output if it wants lower prices, something the U.S. is unlikely to do. This combination of tough sanctions on Iran and no increase in output from Russia or Saudi Arabia is certain to result in higher oil prices.”

As we also said on Monday, Trump can have modest oil prices or he can have Iran sanctions — but he can’t have both.

The problem for Trump is that rising oil prices are one of the catalysts that tip the economy into recession every few years — along with rising interest rates.

Late last year, we began to mull over the possibility history would rhyme again — especially with the 2001 recession, which was preceded by a tripling of oil prices in a two-year stretch from 1998–2000.

WTI bottomed at $26 in February 2016. The tripling to $78 hasn’t happened yet, but we got close in July and we’re getting close again.

Earlier this year, a survey by AAA found that for 20% of drivers, $2.75 gasoline would be the pain threshold where they start to “change their driving habits or lifestyle.” The national average price crossed that threshold five months ago and stands this morning at $2.87.

Conceivably, Trump could release crude from the Strategic Petroleum Reserve — oil the government has stockpiled in the salt caverns of Louisiana and Texas. Goodness knows other presidents have done so to tamp down gas prices, especially around election time. But the effect is inevitably temporary.

To the markets, which are treading water in advance of whatever the Federal Reserve does this afternoon.

By the time you read this, the Fed will have raised the fed funds rate another quarter percentage point — the third increase this year. The only drama will surround the “dot plot” — the guesses of all the Fed pooh-bahs about what they anticipate doing with interest rates next year. We’ll follow up tomorrow.

No big merger news today, but SurveyMonkey — the outfit that makes it easy for anyone to commission an online poll — is up 50% on its first day trading as a public company.

»The big economic number of the day reinforces the picture of a slowing housing market. New home sales jumped in August — but that’s only because the Commerce Department revised the June and July numbers down sharply. Too, sales were goosed by discounts — the median price for new construction slipped 2.4%, to $320,000.

Hooray? The United States has returned to the top 10 among the world’s nations in the “Economic Freedom of the World” rankings from the Cato Institute.

Cato’s researchers evaluate a host of factors in 162 countries, including sound money, rule of law and property rights… then they generate a numerical figure on a scale of 0–10.

The 2018 report is just out, reviewing economic freedom around the world in 2016. The U.S. figure slid steadily under Bush 43 and during Obama’s first term. But it began to turn around during Obama’s second term and now sits at 8.03 — good for No. 6 worldwide. 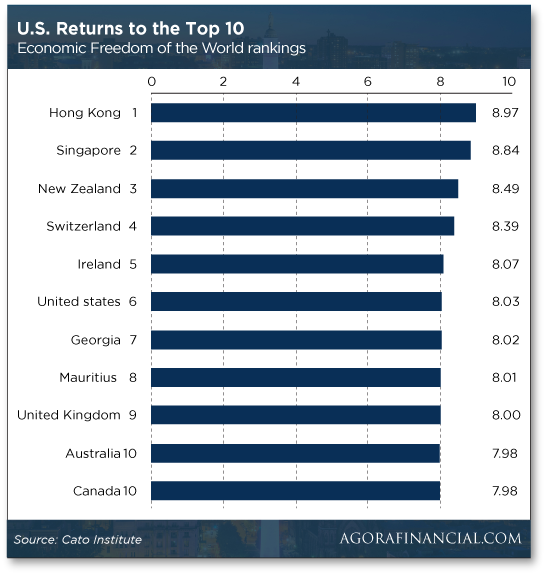 Cato hastens to add that despite the U.S. number improving to 8.03, “this is still well below the high-water mark of 8.62 in 2000 at the end of the Clinton presidency.”

Worst in the world among the 162 countries reviewed is Venezuela. And that was 2016 — imagine what it would be now!

One of the biggest mass-surveillance schemes on the planet just got a court’s blessing.

Starting in 2010, the Indian government began collecting names, addresses, birth dates, fingerprints and iris scans on most of its 1.3 billion population… and dumped all of it into a database called Aadhaar.

In time, nearly all Indians had an Aadhaar number — far more than had a passport or even a driver’s license.

It wasn’t a total victory for the government. The five-judge bench ruled that Aadhaar numbers could not be required to get a bank account or a mobile phone — or for school enrollment.

From the reporting we’ve seen, it was the mobile phone part that stuck in the craw of many Indians. “I wanted privacy while buying a mobile phone connection and am delighted the court has ruled in my favor,” says Tehseen Poonawalla — an activist who helped bring the case to court.

Well, OK. But the cellphone provision of the ruling does nothing to change the fact that Aadhaar is easily hacked.

If you have a really good memory, you’ll recall we told you in January about the system’s sky-high level of vulnerability. Reporters for India’s The Tribunenewspaper paid a mere $8 to hackers to get a username and password allowing access to the database. Plug in anyone’s Aadhaar number and you’d get whatever information the system had on that person.

Whatever efforts were made to fortify the system since then haven’t worked. Earlier this month, Huffington Post’s Indian website revealed Aadhaar “has been compromised by a software patch that disables critical security features of the software used to enroll new Aadhaar users.” Hackers were selling the patch on WhatsApp for as little as $35.

Oy… A few days ago our acquaintance Demetri Kofinas had a disturbing interview on his Hidden Forces podcast with cybersecurity expert Bruce Schneier. Schneier has penned a new book called Click Here to Kill Everybody: Security and Survival in a Hyper-connected World.

The gist of the book: With computer chips and internet connectivity built into more and more of the things we use every day, hackers could achieve all sorts of devastating “domino effects” you’d never expect. It’s entirely possible to break into your “smart” refrigerator and knock out electricity to everyone around you for miles.

His proposed solution to this mess? More government regulation.

We are so screwed… 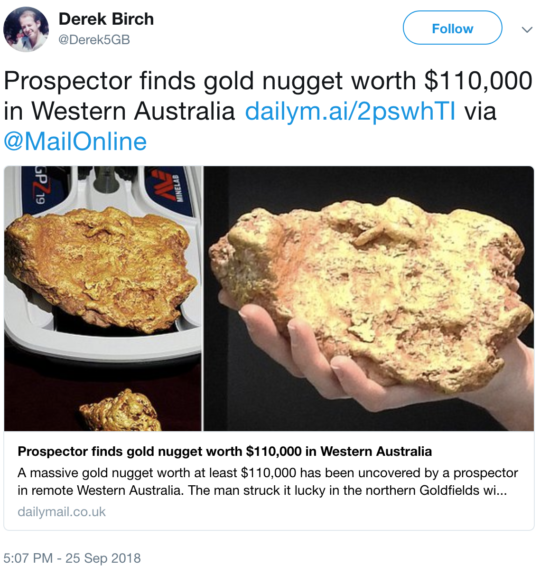 “When I had finished digging it out, I just thought, Oh, my god,” says the retiree who dug it up. He wishes to remain anonymous for now, but he’s an experienced prospector according to Rob Anderson, owner of a business that sells metal detectors and related gear. “He’s been very successful over the years,” Anderson tells the Australian Associated Press.

After we made an aside yesterday about the weird anonymous sourcingin a Reuters story about U.S. sanctions against Iran, a reader writes us a short note:

“Anonymous sources are kind of the only ‘sources’ we get these days — and why no one believes anything anymore.”

As you might know, I spent 20 years working in “legacy” news media.

There was a time when reporters granted anonymity for good reasons — the source wished to reveal information that would be damaging to people in high places but didn’t want to risk his or her own livelihood by becoming a whistleblower. Usually the reporter would also take pains to explain to the reader or viewer why the source should be kept anonymous.

But nowadays, reporters have become promiscuous in granting anonymity for no reason at all and with no explanation — to wit, our example yesterday.

Increasingly it’s up to you, the media consumer, to read between the lines and ask why the source was granted anonymity… whether doing so was truly necessary… and what the agendas are of both the source and the reporter.

What a hall of mirrors…

P.S. Imagine going about your weekend as you normally would… only you’re racking up an extra $9,100 in your account.

He even did a demonstration LIVE on camera!

Click here now to see how you could walk away with thousands — every weekend.

Note: For best results, you need to act before 3:00 p.m. EDT on Friday. Otherwise, you’ll have to wait another week.