Penny stocks “don’t have to publish balance sheets and other fundamental reports, which makes them more of a risk,” says our penny stock expert Tim Sykes. “I say that’s BS.”

Tim notes bid and ask prices for over-the-counter (OTC) stocks that were once published strictly in the Pink Sheets by the National Quotation Bureau can now be viewed online at FINRA’s OTC Bulletin Board (OTCBB).

The Financial Industry Regulatory Authority (FINRA) is a nonprofit watchdog that looks out for investors’ best interests.

So penny stocks — trading off major exchanges for less than $5 per share — aren’t exactly the Wild West some suppose.

“In my opinion,” Tim says, “they can actually be less risky because you can, for example, take a large position for a relatively low cost and potentially take small profits on every play.”

“Unfortunately, there’s no 100%-guaranteed rule that tells you what every stock will do in every situation,” Tim says.

“But there are a number of signals you can use to predict when spikes will happen.”

Over 20 years, Tim’s developed a list of rules he’s followed to trade his way to over $4 million.

Rule #1: Buy into stocks that are just starting to spike

“One of the quickest ways to identify a spike in the making is to start by finding a stock that’s already moving,” he says.

“If you notice that a stock has begun to trend up a little, you can, for example, buy in before the spike and take your profits once the breakout happens.”

“I’m always looking for stocks that are breaking out to new highs,” Tim says, “especially those that are still up on the day and holding the morning high.”

Tim provides a word of caution: “If, for example, you see a play like this on a Friday afternoon and the stock’s still holding its morning high, there’s always the potential for a short squeeze into the close there.

“It’s why I typically avoid the buy-and-hold strategy.”

Tim would rather take small gains where he can than risk holding a stock too long.

“Price action gives you the real story about a stock. Is it breaking out to a new high? Has it crossed its VWAP (volume-weighted average price)?

“All the news sites in the world won’t tell you when these things happen, but a stock’s chart movement will.”

Tim believes there’s enormous value in watching a stock’s price action because patterns will emerge that you can act on.

Which leads to Tim’s last rule…

Rule #4: Do your research

“I hate to say it, but a big reason most penny stock traders fail is because they’re lazy,” Tim says. “They don’t want to do the research that my students learn how to do.”

Tim subscribes to the whole “teach a man” to fish proverb. “That way, you can learn how to find penny stocks on your own.

“I’ve watched some of my students earn massive profits by learning how to find penny stocks,” he says. “They do the research and figure out what plays are most likely to result in profit.

“Does it work every time? Of course not.

“However,” Tim concludes, “the more you learn and study, the more reliable your penny stock picks can become.”

[Ed. note: Not sure what you think about what Tim has to say about penny stocks? That’s understandable.

But following conventional wisdom — buying and holding mainstay stocks, praying you get 10% returns every year — might leave your retirement account woefully in the red.

Following his weekend-trading advice gives you a chance at a weekly profit of $6,198. Or enough for a cruise to Mexico!

See if this is right for you.

But if you want a chance to bring home thousands of dollars for that cruise, you MUST watch this brief clip before FRIDAY at 3 p.m. You’ll understand once you watch it.]

Did the Federal Reserve just put the stock market rally on hold?

Yesterday afternoon, the Fed raised its benchmark fed funds rate for the third time this year. In addition, Fed leaders issued an outlook for a fourth increase in December… and three more next year.

None of those were surprises, but this was: During his news conference, Fed Chairman Jerome Powell ventured to say, “Some asset prices are in the upper reach of historical ranges.”

Traders interpreted that as the Fed trying to talk down a bubbly stock market… and traders quickly obliged. Notice the 180-point drop in the Dow that begins around 3:20 p.m. EDT: 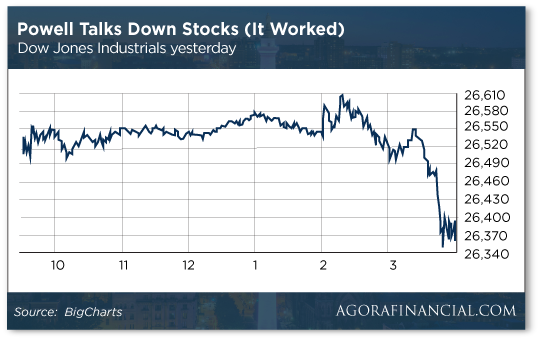 Powell’s still in his first year as chairman… and we recall similar remarks his predecessor Janet Yellen made during her first year.

It’s right there in The 5’s archives from July 15, 2014. Testifying before the Senate that day, she said, “Equity valuations of smaller firms as well as social media and biotechnology firms appear to be stretched.”

For whatever it’s worth, a steady run-up in the stock market the previous 18 months suddenly ground to a halt — and didn’t resume for 18 more months. 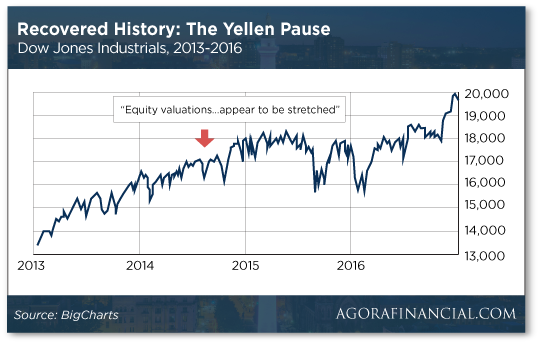 No guarantees that the past is prologue here. But we’d be remiss not to mention it.

For the moment, traders have shaken off that late-day scare.

A barrel of West Texas Intermediate crude’s selling for $72.09.

The Commerce Department delivered its third and final estimate of second-quarter GDP — an annualized 4.2%, unchanged from the previous guess.

Meanwhile, durable goods orders jumped 4.5% in August — but that was driven mostly by demand for commercial aircraft, which fluctuates wildly month to month. If you back out aircraft and military hardware, you wind up with a decline of 0.5%.

In the past month, Jim Rickard says, “It has been one of the quietest and least volatile periods in gold trading since December 2015.”

“A gold investor who fell asleep a month ago and woke up today would not have missed a thing,” says Jim.

Argentina and Turkey are on the verge of economic collapse, and Venezuela’s already there. Iran is weeks away from stringent U.S. sanctions. Not to mention the U.S.-Chinese trade war — the worst in almost 90 years. And Brexit negotiations are in shambles.

Closer to home: “The U.S. is mesmerized by allegations surrounding the Supreme Court confirmation process for Brett Kavanaugh,” Jim says.

“Upcoming U.S. elections may tip the House of Representatives to the Democrats and lead straight to impeachment proceedings against President Trump.”

“If ever there were a world where gold should be the beneficiary of safe-haven demand, this is it,” Jim says. “Yet nothing is happening.

“Of course, the gold price is facing strong head winds at the same time.”

“Geopolitical turmoil is putting a floor under gold prices,” he says, “and higher rates and stock prices are imposing a cap.

“These offsetting trends are probably the best explanation for why gold is moving sideways instead of decisively up or down.”

“The bigger question then becomes how long can this price equilibrium last? If the equilibrium breaks,” Jim continues, “which way is the gold price headed?”

The last time gold traded in such a narrow range was December 2015 when the Fed raised interest rates for the first time in seven years. Following interest rate hikes, gold went on a tear from $1,050 to $1,365 per ounce in early July 2016.

“That December 2015 low marked the end of the bear market that began in September 2011 and the beginning of a new bull market that persists to this day.

“If low volatility is a precursor to a major rally, then gold investors have a lot to look forward to in the months ahead.”

“A second clue” that gold’s set for a rally, says Jim, “has to do with the disparity between the performance of gold bullion versus gold mining stocks.”

In the past year, this relationship’s broken down. “Gold has moved sideways, but gold miners have underperformed,” Jim says. “A wide gap opened between the performance of the two related investments.

“Suddenly the gold miners are catching up. The chart below shows 5% gains in the S&P Metals and Mining ETF versus the broader S&P 500. 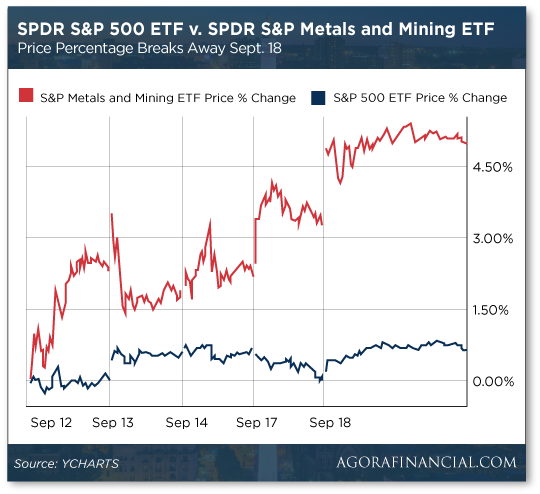 “This upward gap was particularly pronounced on Sept. 18, when the miners rallied 2% in one day versus a slight decline in the S&P 500.

“This kind of performance will quickly close the gap between gold miners and gold,” Jim says.

“It illustrates that gold was the price to watch all along, and a reconciliation would come in the form of higher prices for mining stocks instead of lower prices for bullion.”

“Barrick Gold and Randgold Resources announced they were in talks about a potential $18 billion merger that would result in the largest gold producer in the world.”

Typically, large mergers kick off a string of smaller mergers in the same sector as companies join forces to compete in the same space.

“A series of mergers in the gold mining sector would boost gold mining company stock prices as surely as a rally in the price of gold itself.”

“Despite the price doldrums of the past month,” Jim says, “gold and gold mining stocks are both poised for a significant rally.”

“You can take advantage of that perception by buying gold bullion and gold miners today.”

Now from the “Stupid Criminals” file: “A group of teens smashed a stolen van into a marijuana dispensary in Colorado Springs and stole a bunch of herb,” says an article at CBS Denver.

According to owners of the dispensary — Native Roots — the “smash and grab” happened at 1 a.m. today.

One witness to the crime, Brent Wrathbone, says: “I was coming out from work, and all of a sudden… heard this big old crash.

“[The suspects] came out with bunches of marijuana in their arms.

“I decided just to call the cops… get their plate number and everything, and then I get a beer bottle thrown at me,” says Mr. Wrathbone.

That’s right. The teens tried to fend off the witness by hurling a beer bottle in his direction.

After, the suspects fled with the armfuls of weed in a getaway car parked nearby and abandoned the stolen van deep inside the smashed dispensary.

But… joke’s on them. 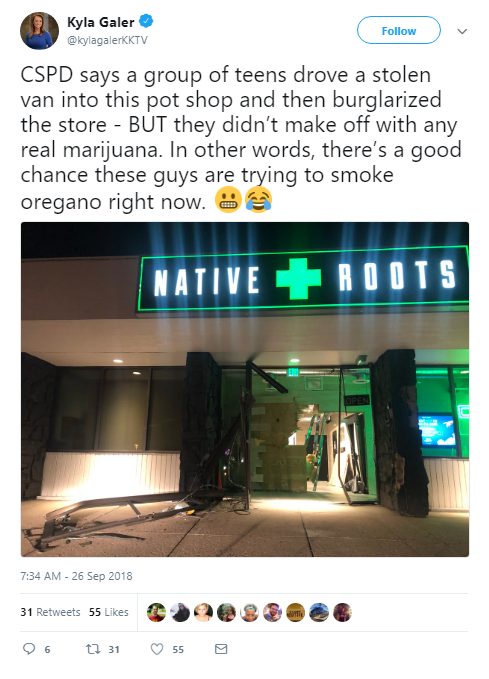 The dispensary owners are clever enough to stock their display cases with nothing more than oregano.

Good for Italian food… not so much for smoking. Heh.

Some people are calling it the “easiest way to invest” and “easy money” — but you’ll have to click here to see it.

But you must watch this brief clip before Friday at 3 p.m.