“Musical Chairs in the Wild West”

“Your input is critical to helping us preempt a heavy-handed regulatory approach that could stall innovation and kill the U.S. ICO market,” said an invitation sent by Rep. Warren Davidson (R-Ohio) to movers-and-shakers in the cryptocurrency space.

Invitees to a round-table discussion in D.C. on Tuesday included representatives from Fidelity, Nasdaq and the U.S. Chamber of Commerce. Reps from Ripple, Coinbase and Circle were also included.

For the benefit of attendees, Davidson forwarded eight questions that would be discussed, including, “What is the best way to protect consumers from fraud?”

So far this year, SEC Chairman Jay Clayton has taken a ham-fisted approach to cryptos, on one hand saying he won’t even think about updating SEC rules to include cryptos. On the other hand he says some cryptos should be treated like securities.

“We all want a fair and orderly market, we want all the same things regulators do,” said Mike Lempres, chief legal and risk officer at Coinbase.

“It doesn’t have to be done in the same way it was done in the past, and we need to be open to that,” he said at the round-table discussion.

“Rep. Darren Soto took the opportunity to point out that the majority of lawmakers in Congress are not necessarily opposed to cryptocurrencies,” reports BTCManager. “They just don’t have much knowledge about it…

“Panelists also highlighted a ‘chilling effect’ that could potentially result from uncertainties in the legal status of crypto and ICOs.”

As is the case with most government-sponsored events, nothing got done.

Hey, at least they got the ball rolling…

“The report followed an inquiry in April by the OAG into potential conflicts of interest and market manipulation on cryptocurrency exchanges.

“The news caused bitcoin to plunge to five-week lows,” James says, “but it didn’t last long.”

While James believes there’s a measure of crypto-market manipulation, the OAG’s report fell woefully short on any specifics.

And this isn’t the only example of the government’s mistrust: “Last month the SEC denied the applications of various bitcoin ETFs, citing claims of potential for market manipulation.

“The fact is that cryptocurrency trading is inherently risky,” James says.

“For one thing, while traditional stock exchanges and brokerages are highly regulated and supervised, cryptocurrency trading is sort of like a game of musical chairs in the Wild West: No one knows when the music will stop,” he continues, “and someone might end up getting shot.”

“Part of the reason that cryptocurrency markets can be manipulated is because they are still relatively small and opaque.

“However, as demand grows and more people invest in cryptocurrency, manipulation will become less feasible — and less lucrative,” says James.

While the OAG and SEC (so many letters) are skeptical, the meeting called by members of Congress this week shows the government’s coming around, trying to understand, and doesn’t want to miss out on blockchain innovation.

One that could have a profound effect on your wealth and the wealth of your family for generations.

And this is NOT some speculation. Take a look at this official letter published by this government agency…

This might be the catalyst that catapults crypto into the mainstream… sending bitcoin on its biggest bull run ever.]

The trading week on Wall Street is winding down quietly.

The major U.S. stock indexes are mixed, none of them moving more than a tenth of a percent one way or the other. Gold is stabilizing after its latest beat-down yesterday at $1,187. Crude is now only 18 cents away from the $73 mark.

Trader chatter surrounds Tesla — which the aforementioned SEC sued after the close yesterday, seeking the ouster of CEO Elon Musk. Musk stands accused of “false and misleading” claims when he tweeted last month about securing the funds to take the company private.

TSLA shares are down 12% on the day. Incredibly, that’s not even a low mark for this month, much less this year.

Nor is that all the SEC is up to: This morning the agency charged Walgreens and two of its former executives with misleading investors about the company’s earnings targets. But traders are shaking off that news, WBA down only a half percent.

The latest “income and spend” report from the Commerce Department doesn’t jibe with the Federal Reserve’s assessment this week of a “strong” economy.

More important, “core PCE” — the Fed’s preferred measure of inflation — came in unchanged for the month, which was below expectations. Year over year, however, the Fed is still right at its 2% inflation target.

“The biggest entertainment market in the world isn’t music, it isn’t TV and it isn’t movies,” says our tech maven Ray Blanco.

“It’s video gaming,” he says. “Video games are bigger than music and film put together.”

“In 2017, video games — whether on mobile devices, PCs or gaming consoles — generated a whopping $121 billion in revenues.

Take a look at the chart… 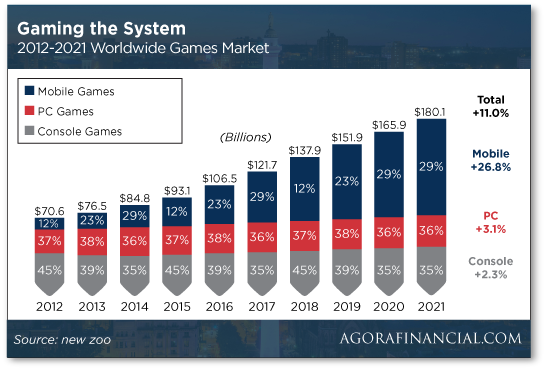 “And there’s one company that dominates in graphics hardware at the high-end, high-performance segment of that market,” Ray says.

And new developments in the pipeline will propel Nvidia to capture an even greater share of the market.

“The opportunity is so huge,” says Ray, “NVDA might still be undervalued even after growing more than 1,200% over the past 2½ years.

[Ray is too modest to mention he recommended it then to readers of his entry-level newsletter Technology Profits Confidential.]

“The 5G revolution, which will make super-high-bandwidth, low-latency wireless connections possible, will make NVDA more successful than ever before.”

Not to mention supercomputing, artificial intelligence and autonomous driving…

As it stands, gamers pay thousands for sophisticated hardware that can run ultra-realistic computer games.

“But 5G could make high-end games work on almost any device,” Ray says.

“All the ‘horsepower’ needed to render high-definition, high-frame-rate games…could be generated at a Nvidia data center.

“On your device, you’d just stream it,” he says.

“Nvidia is already laying the foundation to become the ‘Netflix of gaming,’” says Ray. “It’s been beta-testing GeForce NOW, a streaming gaming service.

“Netflix currently has a market cap of $160 billion — almost on par with Nvidia’s $159 billion market cap.”

Because gaming’s the biggest entertainment industry in the world — and growing — Nvidia’s potential is enormous. 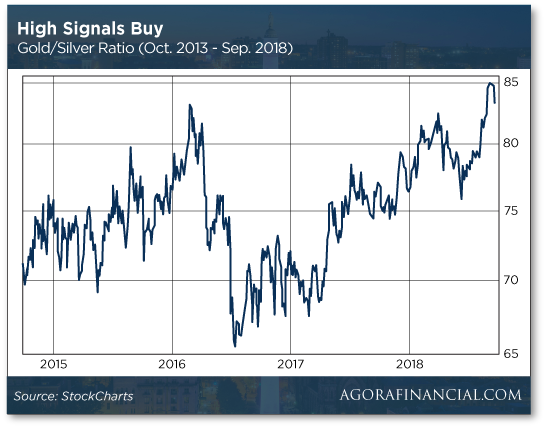 “The graph above charts the time-honored gold/silver ratio,” Mike says, “which is simply the price of an ounce of gold divided by the price of silver.”

As two of the most popular metals investors own, the prices of silver and gold are strongly correlated. When the price of gold rises so does the price of silver; of course, the opposite holds true, too.

“But when the ratio reaches an extreme high, it means silver is significantly undervalued relative to gold, which is a clear buy signal for the white metal,” Mike says.

Looking at the chart, you’ll see the ratio is roughly 84 — the highest it’s been in three years — meaning it takes about 84 ounces of silver today to buy one ounce of gold.

In the past 30 years, the ratio’s exceeded 80 on seven occasions; six of the seven times, silver’s gone on to outperform gold.

“For instance,” Mike says, “the last time before this year that the ratio rose above 80 was in late 2015 and again in early 2016. Sure enough silver prices soared more than 50% within those six months.

“That’s why it’s no surprise to me retail investors are on a buying binge, snapping as many American Silver Eagle bullion coins as they can.”

So far this year, investors have ponied up for more than 10 million Silver Eagles…and the market’s only going to gain momentum.

“Act fast and get your order placed with the U.S. Mint’s website now to save your place in line when silver goes on sale again,” says Mike.

“An even easier way to play the coming silver surge is with the ProShares Ultra Silver ETF (AGQ). AGQ is a leveraged ETF that tracks the price of silver but aims to deliver twice the upside potential.”

Mike says: “This could mean another 50%-plus upside move in silver, like in 2016, that could potentially double your money!”

For your consideration today, a charming cottage in Palo Alto that’ll set you back $2.59 million. 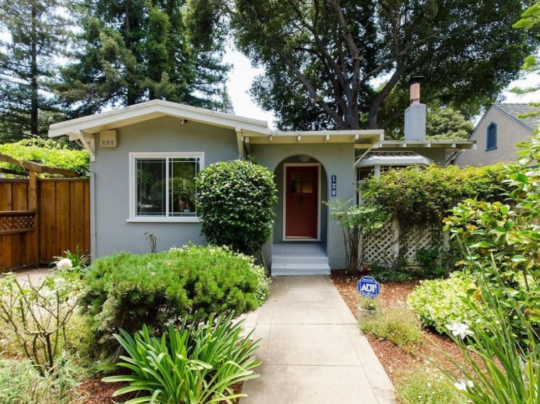 Source: Matthew Anello for Alain Pinel Realtors
We said it was charming!

“With the famed Googleplex a mere 15 minutes away and the hubs of other tech giants also nearby, the home and others like it are in high demand.”

So… it’s close to work, right?

Maybe saving on gas and vehicle wear-and-tear offsets the price of the — oh, never mind.

After our issue Wednesday, a reader says: “Thank you for sharing Cato’s worldwide freedom rankings in today’s edition of The 5.

“Background: For the long term, given the U.S. government’s financial irresponsibility, the USD seems like a very unsound currency.

“Even if USD may hold up… the next year or two, I am reluctant (certainly long term) to hold a serious fraction of my assets in USD if I can reasonably avoid it.

“Question on my mind after reading Cato’s freedom ranking: I would appreciate any of your thoughts (and especially Jim Rickards’) on currencies from the top five in Cato’s ranking (Hong Kong, Singapore, Switzerland, New Zealand and Ireland).

“Of course, I understand Jim recommends gold as money, but as I recall he only recommends about a 10% allocation to gold in a typical portfolio.

“As always, thank you for your coverage.”

The 5: We’ve passed along your inquiry to Jim’s team. Keep an eye out for a response.

P.S. Reminder: The Trump administration is set to make a move this weekend that will turn the cryptocurrency world upside down — and make a select few very rich.

You can be among them. Learn how at this link.