A Paper Tiger Won’t Bite Your Face Off

“What if I told you there were a way to develop your skills as a trader without risking actual money?” says Tim Sykes.

By now, you’re familiar with Tim. He’s made a $4 million fortune trading penny stocks. Not only that, but he teaches people to do likewise.

“I often talk about education, research, building a foundation,” says Tim. “And I tell people to do what I’m about to tell you all the time.”

Tim says he offers the advice… but few people actually follow it.

“Maybe you’d like to start making money in the markets,” he continues, “but you don’t have the confidence to get started. You don’t want to lose a lot of money, which is perfectly understandable.

“If that’s you, paper trading could be the ideal way to go.”

“Today I’ll give you the 101 Paper Trading Basics,” Tim says. “They could launch you on a highly successful trading career.”

“You’re choosing stocks, putting in orders and watching what happens next to see if your trade is profitable or not.

“The key difference is that you’re not actually trading with money when you’re paper trading,” Tim says.

“The transaction is completely virtual. No actual money enters or exits your account as a result of paper trading.”

Used to be, you could grab a newspaper, pencil and paper and work out trades. Today, “simulated paper-trading platforms online have become the preferred way to do it,” says Tim.

“Why should you practice paper trading?” Tim says. “A lot of new traders roll their eyes at the very concept of virtual trading. If you’re not actually making money, why bother with paper trading?”

Tim appreciates that you might want to dive right into trading penny stocks but says virtual trading’s well worth your time.

Getting your feet wet…

“If you’re a new trader,” Tim says, “the entire process of choosing stocks and executing trades can be overwhelming. There are a lot of factors to consider, and the pace is fast.”

Things you’ll need to learn over time — with quite a steep learning curve:

“True, the fact that paper trading doesn’t risk actual money means you won’t earn anything through your efforts.

“Paper trading can offer you the opportunity to be a little less risk-averse in your trades to see what might happen if you were taking bigger positions.”

Tim says: “It can be a great way to test the waters without risking your hard-earned cash.”

Over time, successful traders develop their own techniques to spot the best stocks to trade, but markets change.

“If you want to test out a new setup or trading strategy, paper trading can offer the perfect platform for it,” says Tim.

“[It] can be a great way to try new strategies and maybe even develop a new bread-and-butter setup.”

“In paper trading, just as in real trading, you’ll need to choose the best type of order to suit the market conditions and your personal risk tolerance and trading style,” Tim says.

“Paper trading is kind of like trading with training wheels,” he continues.

“While paper trading is a great tool, be careful about using it too long before you switch to live trading…

“There will come a point at which you’re going to have to take the training wheels off and try to ride on your own,” says Tim.
“This is one of the reasons that I suggest switching to real trading pretty quickly but keeping your positions small,” Tim says.

“By live trading with small positions, you may not profit a lot, but you’ll learn a lot about your personal risk tolerance and the true psychology of trading.

“Now that you’ve got the basics of paper trading and how it can be extremely beneficial,” Tim says, “you can try it yourself.”

[Ed. note: Penny stock guru Tim Sykes has taken our business by storm. Many of our readers have already taken advantage of Tim’s strategies to secure their retirement.

Maybe you’d like to join in but fear you lack the experience to succeed and you don’t want to risk your hard-earned money.

Be one of the few to follow Tim’s advice: Do your homework, practice by paper trading and then start with his weekend trading system.

Even a small stake can equal big profits… but you’ve got to act before Friday at 3 p.m. Learn more right here… including how you could be $6,500 richer by Monday, Oct. 8.]

To the markets today where Treasury rates are now the highest since July 2011 with 10-year notes at 3.2%.

And we’re seeing a lotta red…

Just saw that factory orders were up 2.3% in August; this beats the 2.1% expected increase.

“Trump’s trade war has no end in sight,” says our income specialist Mike Burnick. “This spells big trouble for the market.”

In mid-September, Trump put the tariff smackdown on an additional $200 million worth of Chinese goods; the tariff registers at 10% through the end of the year. (There are midterm elections and the holiday-shopping season to get through, after all…)

By the time we’re toasting the new year, tariffs are scheduled to increase to a walloping 25%… and the trade war begins in earnest.

Mike says: “Here are the stocks and sectors you should avoid to keep your wealth safe if things go nuclear.”

Even as the Dow and S&P 500 are reaching all-time highs, there’s a growing list of large-cap stocks that’ve been blindsided by the trade war.

“Dozens of blue chip companies in the S&P 500 have already plunged into bear market territory due to trade war trauma,” Mike says.

Some of the biggest losers?

From the chart below, you can see the information technology sector has a lot to lose, with foreign sales accounting for 57% of total sales, followed closely by the energy (54%) and materials (53%) sectors. 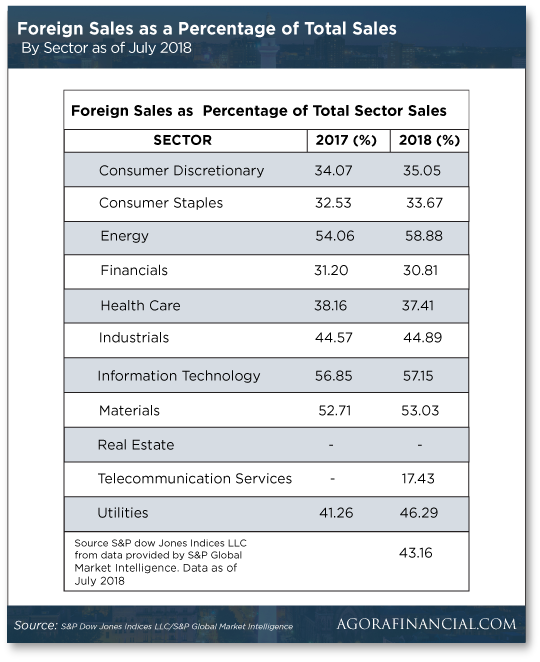 The most concerning sector: Technology.

“[It’s] the biggest wild card,” he continues. “Tech sector profits have consistently boosted overall corporate profit growth in recent years, and the sector is by far the biggest in the S&P 500 by market cap.”

Mike says: “Who is most at risk in tech?

“Apple earns about one-third of its sales from Asia and Japan. Europe accounts for another 24%,” he says.

“Apple products have escaped U.S. imposed tariffs on its key suppliers for now, but if China and Europe strike back, with higher import duties on iPhones this could spell trouble for the trillion-dollar company.”

While we’re on the subject of FANG — er, FAANG — stocks…

“The reason this is such a risk for the stock market is AAPL and AMZN alone are responsible for 30% of the S&P 500’s 9% gain so far this year,” Mike says.

“If the U.S. tech sector gets targeted for future tariffs next year,” Mike warns, “it could be a big blow to S&P 500 profitability.”

“Competition for your eyeballs is fierce,” Ray Blanco says.

No, he’s not talking about harvesting organs or anything of the sort… heh. Instead, Ray’s referring to televisions.

“Your new or almost new 4K TV will be replaced over the next few years by 8K TV as the standard offering in the electronics stores,” he says.

“It’s all about resolution. The more pixels — the tiny individual lit elements that are used to create a picture — crammed into a screen, the more realistic the images a TV displays.

While 4K television screens have 8 million pixels, 8K TVs will have over 33 million… and they’ve already come to market, costing tens of thousands of dollars.

Those prices will eventually drop and more people will fork over the money for 8K TVs and computer monitors.

“8K is going to be an incredibly bullish trend for two of our tech plays,” Ray says.

“Nvidia (NVDA) and Advanced Micro Devices (AMD) are the No. 1 and No. 2 makers of discrete graphics processing units (GPUs).

“With 8K displays starting to show up, we’ll see a new wave of demand for the fastest and most powerful GPUs,” says Ray. “Nvidia’s and AMD’s latest cards are now designed and built to handle the workload.”

And 8K TVs piggyback on another trend Ray’s been following since 2015.

“8K will make VR much better and more realistic. The first 8K VR headsets are expected to start shipping at the end of the month.

Ray says: “Will the display-upgrade profit engine dry up for these two companies once 8K is fully mainstream?

“Switzerland’s largest crematorium has put in place technology to filter precious metals from the 6,000 or so bodies that are cremated in its facility each year,” says an article at Swiss website The Local.

About a third of families have chosen to have their loved one’s body mined — so to speak — by undergoing 1,200-degree fire that leaves behind deposits of gold, silver and platinum.

What happens next probably isn’t what you think…

“The crematorium then sells the [precious metals] to recycling firms for profit.”

You got it. The family doesn’t benefit; instead, they get an urn full of super-sifted ashes. 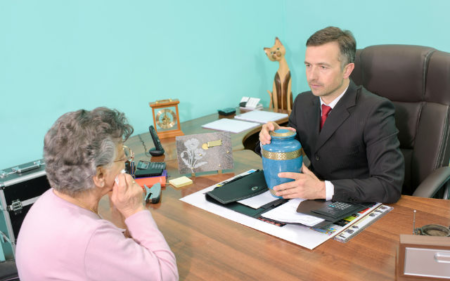 Our condolences… On the bright side, we hit the mother lode!

The crematorium, however, doesn’t keep the profits. “The recycling project is set to earn the city of Zurich 100,000 Swiss francs [$101,000] in revenue each year.

“The only other crematorium in Switzerland to employ the same filtering technique,” The Local says, “has made 40,000 Swiss francs [$40,400] in annual revenue recycling precious metals.”

Ursula Lauper, a spokeswoman from another Swiss crematorium, disagrees with the enterprise: “The ashes belong entirely to the relatives, not the crematoria or the state.”

Readers of this options service registered tremendous returns off one on the pharma company Tesaro — and in less than three weeks.

Missed out this time? Alan has a new recommendation coming your way Monday. To learn more about Alan’s system, check it out here.