“I like to think of myself as a retired trader,” says our penny-stock trading expert Tim Sykes.

By retired, Tim doesn’t mean the way most of us wage slaves like to dream about retirement… heh.

“I’m not going to come out of retirement for a so-so stock play,” Tim continues, “just like a retired athlete isn’t going to come back to play for a minor league team.” Which actually might not be the best example…

You’ll recall Michael Jordan did, in fact, come out of retirement in 1994 to play Minor League baseball for the Birmingham Barons. Of course, that was the first time he retired.

“You might get fidgety or anxious when you haven’t been able to find good penny stocks for days,” Tim says, “so you start looking for a reason to trade.”

Instead, while you’re waiting for a major-league opportunity that lures you out of retirement…

Tim says: “Just as you must do your research to learn how to find penny stocks, you also have to research brokers to figure out what they offer.”

“There are lots of… qualities you need to consider before selecting a penny-stock broker.” Some of the most important questions to ask follow:

Does the broker/brokerage offer a mobile trading platform?

“I don’t know about you,” says Tim, “but I don’t want to have to pick up the phone and place a call every time I want to enter or exit a trade.

“First, a phone call takes too much time,” he says. “Second, I prefer to execute trades myself.”

Make sure you have access to the broker’s trading app that you can use on your computer or phone. “That way, you can access your trading account whether you’re sitting at home in your pajamas or lounging by the pool at a hotel in Fiji.”

What will you pay for every trade you execute?

“The best penny-stock brokers charge by the trade,” Tim says, “not by the share.” You’ll want to pay the same fee whether you’re buying one share or 4,000.

(However, if a brokerage charges a penny per share with no per trade fee, the opposite might work to your advantage. You’ll have to do the math in that case.)

Does the broker require you to trade at a certain frequency?

Because you’ll be doing your own research and only “coming out of retirement” for the best trades, “if the stars don’t align,” Tim says, “don’t trade.”

Some brokers — especially for high-volume traders — require a minimum deposit of $10,000.

For beginners, however, that’s not necessary.

“Of course,” says Tim, “you’ll have to fund your brokerage account if you want to trade.” But most online brokers today don’t have a minimum requirement.

“If you’re just learning how to find penny stocks,” Tim says, “I recommend signing up for two platforms.

“One is a trading tool that helps you learn how to find penny stocks, read charts, find patterns and otherwise learn the ins and outs of the industry.

“The other enables you to trade.”

“It’s ideal for getting your feet wet and figuring out how the stock market works,” says Tim. “You can use it for everything from paper trading to price event alerts.”

StocksToTrade is equally beneficial for experienced traders. According to Tim: “You’ll have access to more data, better-quality information and even the major stock exchanges.”

We assure you Tim doesn’t have an endorsement deal; he’s just used the trading platform many times over the years.

And he believes it’s a good match for beginners because it ticks all the boxes. A flat fee of $6.95 is charged per stock trade. There’s no minimum frequency or deposit. Plus, TD Ameritrade’s site is intuitive and user-friendly.

“If you learn how to find penny stocks accurately and consistently, you can… develop a system that works for you and builds wealth over time.”

Ed. note: Is it time for you to come out of retirement? To watch profits add up in your account?

You’ll want to start right away for a cash windfall as early as Monday.

Click here to see how you can start making money this weekend — and almost every weekend thereafter.

To the markets… ugh… so much red today.

According to Bloomberg: “The Treasury Department stopped short of declaring China a currency manipulator in its semiannual report on foreign-exchange rates, averting an escalation of a trade war while serving notice that the U.S. will closely watch the yuan after its recent slide.”

“Of particular concern are China’s lack of currency transparency and the recent weakness in its currency,” says Treasury Secretary Steve Mnuchin. “We will continue to monitor and review China’s currency practices, including through ongoing discussions with the People’s Bank of China.”

Which is essentially a facsimile of April’s report…

“If you have some money sitting on the sidelines, this may be a great time to go bargain hunting,” says our income specialist Mike Burnick.

The price-earnings-to-growth (PEG) ratio is calculated by dividing a company’s price-earnings (P/E) ratio by its annual earnings growth rate.

To put that in perspective, the PEG ratio at the beginning of the year was 2.0.

Take a look at profits from S&P 500 companies for the first two quarters of 2018: 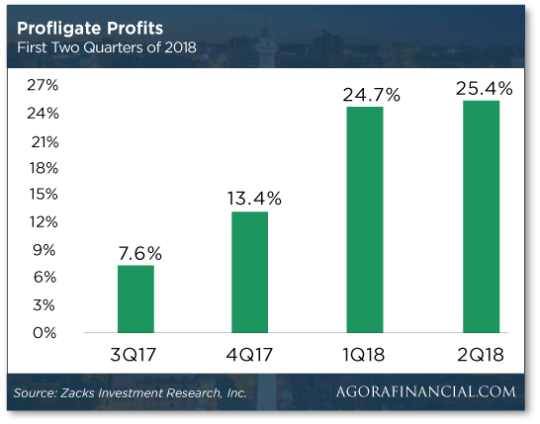 “It’s one of the most impressive six months of prosperity I’ve ever seen,” says Mike. “You simply do not get recessions when American businesses are making money hand over fist like that.”

During the past nine years of this bull market? Stocks have never been cheaper. 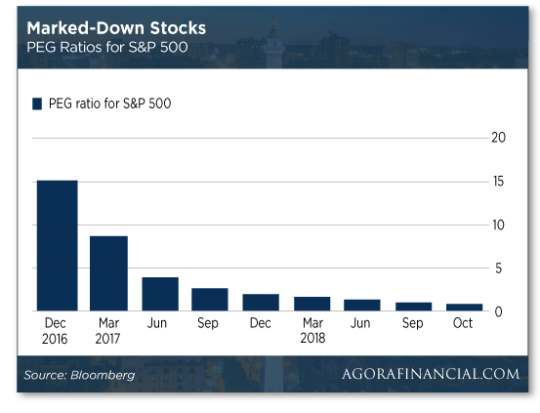 “The consensus estimates for the profits of the S&P 500 are expected to increase by 17.6% in the third quarter,” Mike says.

That would make double-digit earnings growth for six of the last seven quarters.

“Plus, corporate America is buying back their own stocks at a furious pace,” says Mike. “Buybacks reached $190.6 billion in the second quarter on top of $189.1 billion in the first quarter.”

Buybacks reduce the number of outstanding shares; a shareholder’s stock, then, generally increases in price — simple supply and demand.

All that’s great, right? But the market’s carnival-ride plunge last week left many investors dizzy. And maybe a little queasy.

“I know many of you lost money last week,” Mike says. “But the trio of skyrocketing corporate profits, massive share buybacks and now much cheaper stock prices is something you shouldn’t overlook.

“You have two choices,” he says. “You can run for the hills and start selling (a bad idea if you ask me).

“Or… you can do the smart thing by taking advantage of these bargains and buy stocks now!”

To protect the interests of New York investors, the office is applying the anti-fraud Martin Act that’s been used to collect billions in fines from errant institutions.

Under the Martin Act, the AG doesn’t have to prove MoviePass misled investors about the company’s financials intentionally or even carelessly. If the books are cooked, MoviePass is cooked…

Notwithstanding that the company already appears to be held together by chewing gum and wishful thinking. 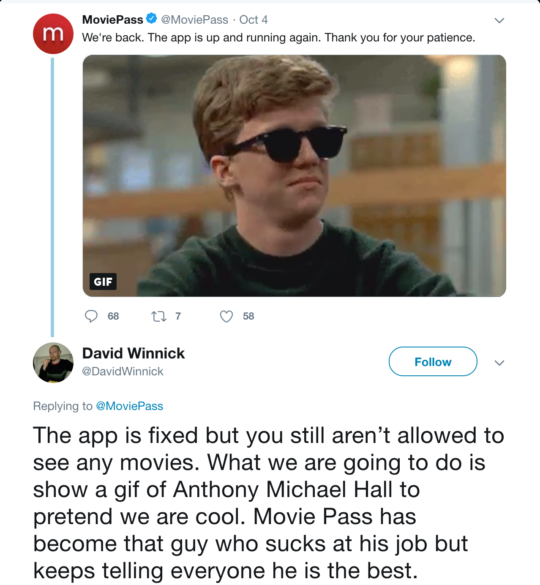 MoviePass has a lotta teed-off customers…

Speaking of which, if you visit MoviePass’ customer service Twitter account, there’s been no new activity since July 4. July 4.

Is that the equivalent of telling customers complaints will go directly into the ol’ circular file?

Movie Pass’ parent company Helios and Matheson says: “We are aware of the New York attorney general’s inquiry and are fully cooperating.

“We believe our public disclosures have been complete, timely and truthful and we have not misled investors. We look forward to the opportunity to demonstrate that to the New York attorney general.”

“It’s another stumble for MoviePass,” CNBC says, “which in recent months has repeatedly adjusted its movie subscription plans and taken out hefty loans to cover massive losses.”

In the second quarter reported in August, the company hemorrhaged $100 million and changed its subscription terms too many times to count and Helios and Matheson (HMNY) stock has since cratered to 2 cents per share. 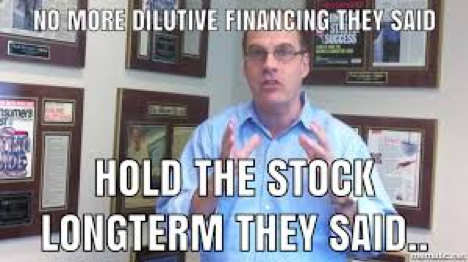 “Based on the company’s most recently reported share count of 1.5 billion shares outstanding,” CNBC says, “the company trades at an implied valuation of $30 million.”

If New York’s AG wants to recoup some fines, they might want to move on this. Post. Haste.

As always, we’ll continue to keep a finger on MoviePass’ pulse… although it’s getting more and more faint.

In response to The 5’s analysis of the situation with Saudi Arabia: “I just can’t get excited about the death of a journalist,” says a reader…

“… at least no more than the deaths of many tens of thousands who have suffered death as a result of stepping out of line against their government.

“It is foolish and ignorant to think that the U.S. hasn’t done the same to protect their interests.

“People disappear or jump from their apartments, etc., all the time; we usually hear nothing about it, though.

“The threat of a war in the Middle East is growing on its own almost daily. Tens of thousands killed and millions displaced in Syria but, usually, nothing but crickets.

“Why is this life so much more important than those?

“Would the U.S. potentially start a war if one of us was killed (he asked rhetorically)?

“Yes, it is another senseless loss of life. And something proportionate should be done.

“Potentially destabilizing oil and the Middle East over it is absurd.

“If I found a melanoma on my hand, I would take action — but it wouldn’t be to cut my arm off.

“Maybe this is nothing more than what Stalin observed when he said something to the effect of ‘The death of one person is a tragedy. The death of a million is a statistic.’”

As for the Stalin quote — the Russian dictator, responsible for killing 43 million people, hit the nail on the head. (If you’ll excuse the indelicate turn of phrase….)

University of Oregon psychologist Paul Slovic has been researching how people respond to humanitarian tragedies for decades.

In a 2017 interview at Vox, he said: “The value of a single life diminishes against the backdrop of a larger tragedy” — something he calls “psychic numbing.”

“The opposite side of that is something we call the singularity effect,” Slovic continues. “We all go to great lengths to protect a single individual… but then as the numbers increase, we don’t respond proportionally to that.”

Imagining one hapless victim of the Saudi regime — dismembered and carried out of the consulate in pieces — is easier for the human mind to grasp than, say, the 50,000 Yemeni children who died in 2017 — as a result of the Saudi-led war — according to Save the Children estimates.

A headline at Dissident Voice puts it this way: “How Many Yemenis Is a D.C. Pundit Worth?”

To the reader’s point: Worth further destabilizing the Middle East and U.S. oil interests? If 50,000 children haven’t tipped the scale…

P.S. Are you worried that the recent sell-off is the beginning of a bigger crash?

Or do you think the bull market still has legs?

Either way, you should learn about this remarkable strategy that’s upsetting Wall Street’s status quo… and might change the way you grow your wealth.

If you’d like to know the secret of making money in this crazy market, we urge you to click now.