Turning Back the Clock on Netflix

Netflix shares are up more than 50% during 2018, with a market cap now topping $140 billion. But management thinks it still doesn’t have enough cash to work with.

Yesterday, NFLX announced it would take on $2 billion in new debt for “general corporate purposes.” That’s on top of $1.9 billion borrowed in April and $1.6 billion a year ago. The company plans to spend, spend, spend to keep up with new streaming competition from the likes of Disney and AT&T’s WarnerMedia unit.

We suspect it will end in tears, for reasons we suggested six months ago.

But NFLX is on our minds this morning for a very different reason.

Usually we offer these examples by way of saying that some little unknown stock is “the next Netflix” or whatever.

The problem is there’s no systematic way to identify those companies before they start making those epic moves… so you can be positioned to capture maximum gains.

It’s come to our attention that such a system might exist after all. That’s all I can really say right now — not least because we need to investigate further. Extraordinary claims require extraordinary proof, you know.

Stay tuned. I’ll keep you updated on our progress in the weeks ahead…

In the meantime, the “safety trade” is in full swing this morning.

The trouble started overnight when China’s stock market took a stumble — only two days after notching a four-year low. Suddenly the recovery rally was off and panicked money flooded into the safety of gold. At last check the Midas metal is up to $1,231 — a three-month high.

Then the scare spread westward to Europe — where European Union leaders rejected a spendthrift budget proposal by the populist government in Italy. Fears of Italy leaving the euro are way overblown, but panicked money flooded into the safety of U.S. Treasuries — pushing prices up and yields down. At last check the yield on a 10-year note is down to a three-week low of 3.12%.

Finally, two of the 30 stocks in the Dow Jones industrials delivered earnings disappointments — 3M and Caterpillar. With that, the Dow is down more than 400 points — below 25,000. MMM is down 7% on the day. CAT is off more than 9% — its biggest one-day slide since 2008.

The S&P 500, meanwhile, has cracked below 2,710. If you were with us yesterday, you’ll recall that’s the level Mike Burnick told us was a line in the sand. If the S&P could bounce off that level, it would set the stage for a big rally in the weeks ahead. So much for that.

The sense of an economic chill coming over the world has knocked down oil prices in a huge way, a barrel of West Texas Intermediate sliding from over $69 to below $66.

Caution: While we keep pointing out — as we did again yesterday — that we’re in the late boom phase of the boom-bust cycle, it’s too soon to say the top is in. As wise old financial hands will tell you, market tops aren’t an event — they’re a process. The process is underway… but nowhere near over.

CAT is a critical economic bellwether. Good stuff doesn’t happen in the economy at large without bulldozers and backhoes.

It turns out the steel lobby has been unusually capable at getting what it wants from Washington lately.

Not only did the industry prevail on the Trump administration to impose tariffs on imported steel, but this morning’s Wall Street Journal has a front-page story telling us steel producers “have also proved equally effective — and far more effective than many other industries — at avoiding tariffs they don’t want.”

Last month, the industry successfully managed to get 66 crucial steel-making components excluded from a list of Chinese imports subject to new tariffs. Per the Journal’s numbers, the steel lobby fared much better than the retail lobby, the restaurant lobby or the homebuilder lobby — which also pleaded for exclusions from the list.

What does the steel industry have that the others don’t? The Journal’s story didn’t offer an answer… because the answer turned up in a competitor’s story last month.

The most powerful trade hawk in the Trump administration is U.S. Trade Representative Robert Lighthizer. That’s a Cabinet-level position.

For more than 30 years before Trump named him to the job, Lighthizer worked for one of Wall Street’s most storied law firms, Skadden Arps. He brought two of his law partners with him to Washington last year.

“For years,” says the Financial Times, “the trio had fought imports from China and elsewhere on behalf of clients in the U.S. steel industry, but they were about to do so on a much bigger scale for the Trump administration.” 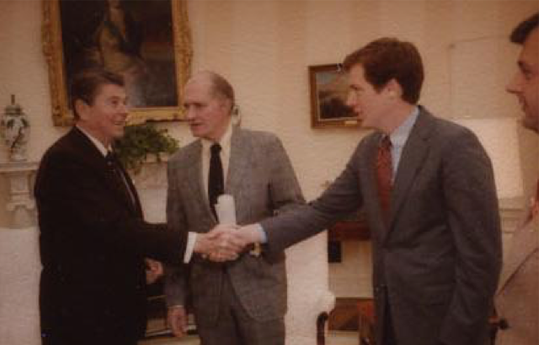 Lighthizer shaking hands with Ronald Reagan in 1983. He left the Reagan administration in 1985… to join Skadden Arps

In addition to Lighthizer and co., Commerce Secretary Wilbur Ross — another trade hawk — has a long history of investing in the steel sector.

“Many trade lobbyists and lawyers at rival firms,” according to the FT, “say the administration is neglecting the broader concerns of U.S. business — notably rising input prices and the risk of retaliation against exports — in favor of one sector’s priorities.”

Alas, the sector’s lobbying power isn’t showing up in share prices. This morning, both Nucor (NUE) and U.S. Steel (X) sit near their lowest levels all year. Avoid.

Speaking of lobbying power, there’s another story in today’s Journal that swings and misses.

Don’t get us wrong, the paper got a good scoop: German Chancellor Angela Merkel has quietly informed lawmakers her government plans to subsidize the construction of a $576 million terminal for the import of LNG — liquefied natural gas.

That’s a hell of a reversal, but we saw it coming.

Germany needs lots of natural gas, and Russia is the cheapest and easiest source. Russian supply is so bountiful that plans were underway to build a second undersea pipeline from Russia to Germany… to supplement the one that already exists.

Donald Trump was strong-arming the Germans to junk that deal — even imposing sanctions on companies involved in financing that Russia-to-Germany pipeline.

Trump would rather the Germans buy American-made LNG. The problem for the Germans is that cooling the gas to liquid form in America, putting it aboard a specially designed tanker and then converting it back to gas form once it arrives in Germany… is way more costly than just getting plain ol’ gas via pipeline from Russia.

The Germans had stood firm… until now.

The Journal doesn’t say so, but surely one of the biggest beneficiaries of this move will be the big dog of American LNG — Cheniere Energy. It’s such huge player it secured the ticker symbol LNG.

As we documented in July, those sanctions targeting the Russia-Germany pipeline deal were the result of extensive lobbying by Cheniere Energy, going back to the Obama administration.

Clearly, that lobbying is starting to pay off. LNG shares rallied about 13% after our write-up in July. They’ve since pulled back to slightly below those July levels. We wouldn’t be at all surprised to see an even stronger rally now…

We’re not sure what to make of the following item — from either a financial or a cultural standpoint, but…

Remember when there was a brief YouTube outage a week ago today? It turns out that users who couldn’t get their fix of gaming videos or product reviews or whatever… turned to adult videos instead. 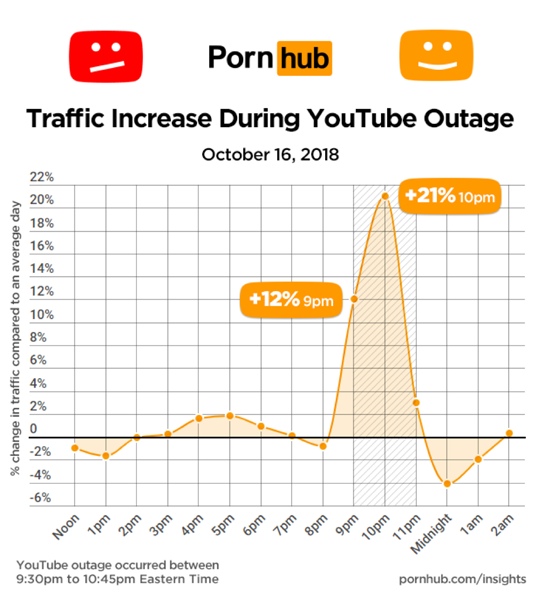 The numbers returned to normal once YouTube was up and running again.

According to Wikipedia, MindGeek’s primary business is internet skin flicks… although you’d never know it from the company’s home page, which merely says it “continues to drive the state of technology forward, developing industry-leading solutions enabling faster, more efficient delivery of content every second to millions of customers worldwide.”

Maybe we spoke too soon yesterday when we said we weren’t back to the era of fog-a-mirror mortgages.

“I was golfing here in Hawaii with a lady who owns a mortgage company,” a reader writes. “She said she has no-document loans available and we could close fast. I just put down I make $1 million a year at McDonald’s… she certifies that is what I told her… and now I am the owner of a $3.5 million home.

“Magic is coming again. Thanks to the small bumps in interest rates and the impact of the tax law in high-value Hawaii — with the limits on the mortgage-interest deduction — sales have slowed down for the last few months.

“Creative financing to the rescue. Do you own gold and cryptos?”

Before we go, a follow-up to the reader who wrote in last week and said he couldn’t get too worked up about the death of the Saudi Arabian journalist Jamal Khashoggi.

He contrasted Khashoggi’s death with “the deaths of many tens of thousands who have suffered death as a result of stepping out of line against their government” and invoked the infamous line attributed to Stalin: “The death of one person is a tragedy. The death of a million is a statistic.”

Which brings us to Tom Friedman, the oafish columnist for The New York Times. Nearly a year ago, he wrote a slobbering profile of Mohammed bin Salman, the hotheaded power behind the throne in Saudi Arabia. He gushed that MBS “will not only change the character of Saudi Arabia but the tone and tenor of Islam across the globe.”

We weren’t aware of it until today, but in the first column he wrote after Khashoggi’s disappearance on Oct. 4, Friedman stated the following…

“If Jamal has been abducted or murdered by agents of the Saudi government, it will be a disaster for MBS and a tragedy for Saudi Arabia and all the Arab Gulf countries. It would be an unfathomable violation of norms of human decency, worse not in numbers but in principle than even the Yemen war.” [Emphasis ours]

This is how they think in establishment media. Kill a single writer for The Washington Post and that’s worse than a genocidal no-win war. (Yesterday the U.N. said 8.4 million Yemenis rely on emergency food aid. That is, they rely on it when the Saudis aren’t blocking the ports where the aid comes in.)

Stalin must be smiling up from hell…

P.S. One of our top publishers wants to extend an apology after recording a 90-second video that’s generated a major stir.

He says because of the controversy it’s created, he’s decided to take the video offline.

But not for another 36 hours or so. Just in case you still want to view it — heh.