Making Sense of a Nonsensical Market

The problem with the stock market right now is that it’s one step forward, two steps back. Added up over time, it’s still going in the wrong direction.

As we write this morning, the Dow is up 365 points… which after yesterday’s 600-point loss puts the Big Board slightly in the green for calendar year 2018.

It’s one thing for the market to go nowhere over 10 months… but does there need to be so much drama with it? 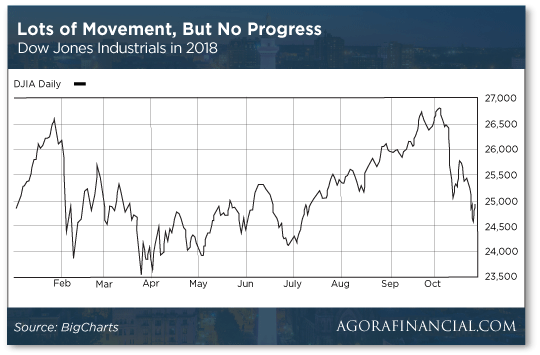 For one thing, the sell-off had the potential to accelerate big-time this morning with the release of the durable-goods numbers.

As a reminder, this is the Commerce Department’s measure of orders for goods intended to last longer than three years — everything from washing machines to drill presses to ballistic missiles. It’s an important measure of the U.S. factory sector. A disappointing number would have given traders another reason to hit the “sell” button.

But it wasn’t disappointing at all. The “expert consensus” among dozens of economists polled by Econoday called for a drop of 1.5% between August and September. In the event, the number jumped 0.8%.

That said, the number is very “noisy” month to month — easily moved by orders for costly aircraft and military hardware. If you throw out those figures, you get a number called “core capital goods.”

And core capital goods absolutely stunk — falling 0.1% compared with expectations for a 0.5% jump. That means businesses are investing less in their future growth. Bleah…

Meanwhile, if it weren’t already obvious, the two big drivers of the consumer economy — housing and autos — have peaked for the post-2008 cycle.

There was a marginally positive housing number this morning, but it doesn’t make up for a miserable overall trend. As noted here yesterday, new home sales for September came in way below expectations. Worse, the August and July numbers were revised down. And the pain isn’t limited to new construction; last week, existing home sales also disappointed mightily.

As Econoday sums up this morning, “Buyer blahs in the housing sector are one of the chief and unwanted features of the 2018 economy. Rising mortgage rates, now over 5% for 30-year fixed loans, aren’t helping though the strength of the jobs and stock markets should be pluses.”

But don’t get the wrong idea. Once again we hasten to point out that numbers like these don’t mean “the top is in” for either the economy or the markets.

In late summer 2006, the bursting of the housing bubble was finally making its way into public consciousness. People were starting to realize real estate wasn’t a guaranteed ticket to effortless riches.

The perma-bulls at the National Association of Realtors couldn’t gloss over increasingly lousy numbers. During the last week of August, the NAR put out its July existing-home sales figure. It tumbled 4.1% for the month. Then as now, it was a shocker.

Your editor was still working in the TV news racket at the time. I noticed all three of the dinosaur broadcast networks leading their evening newscasts with the story. Yeah, stick a fork in the housing bubble, I thought to myself.

No, we’re not saying the Dow rallies 25% between now and Christmastime 2019. But there’s also no reason to say it’s impossible.

Short term, there are two big drags on the market — and both should resolve themselves over the next couple of weeks.

One drag is the midterm elections, now 12 days away. The Republicans have an uphill climb hanging onto the House, but if they do it means a continuation of policy the last two years. If the Democrats retake the house, it means D.C. returns to the “gridlock” that TV pundits wring their hands about.

Really, neither outcome is either good or bad for the markets. (Again, the stock market climbed for much of 2007 after the Democrats swept Congress in 2006 while a Republican occupied the White House.) But it’s the uncertainty giving traders the willies right now.

The other drag is the “buyback blackout window.” Federal regulations typically forbid companies from repurchasing their own shares in the month before they report their quarterly results.

As of Oct. 5, fully 86% of the S&P 500 companies were under this blackout, according to a Goldman Sachs analysis. That matters immensely because at the moment, buybacks account for the biggest percentage of cash spending by those companies… and as we’ve been saying for a while, buybacks are a major driver of this bull market.

JPMorgan Chase says U.S. companies have set aside $1 trillion for buybacks this year… and not all of that total’s been spent yet.

Now that earnings season has been underway for a couple of weeks, the buyback blackout window is lifting — first slowly, and now faster. One-third of the S&P 500 companies are reporting their numbers this week alone.

Speaking of earnings season, we see one of the standouts in the last 24 hours is Tesla. 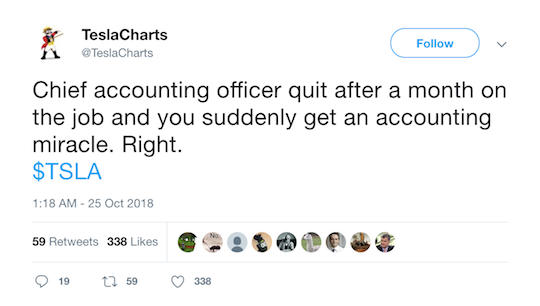 Gold, meanwhile, is looking healthy despite a bout of dollar strength this month.

Typically, a chart of gold and a chart of the U.S. dollar index are mirror images. One goes up, the other goes down. You see that at the beginning of this chart going back one month. 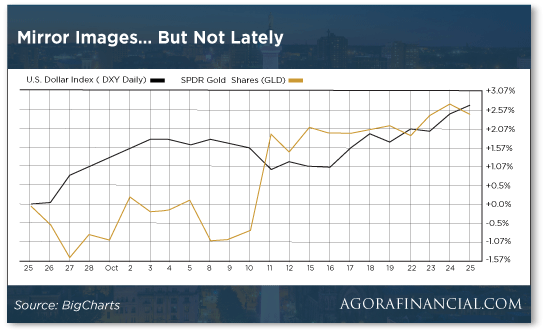 As we suggested when gold made that big move on Oct. 11, gold is reclaiming its traditional role as a safe haven amid volatility in other asset classes… and there’s been no shortage of volatility this month.

Jim Rickards elaborates today: “With cash offering low yields, stocks and bonds both in retreat and emerging markets in turmoil, investors turned to gold as the one sure bet that would retain value.

“This safe-haven demand combined with strong supply/demand fundamentals in the physical bullion market were enough to give gold a spike out of its recent trading range.”

In addition, Jim says hedge funds have been massively shorting gold in the futures markets — betting the price will go down.

It’s been a bad bet, and now a “short squeeze” is underway: “Traders have to cut those losses, which they can do by closing out their futures contracts or hedging with physical gold. A rush to close out futures contracts can do more harm than good; so many hedge funds bought physical gold (or ETFs) to hedge their short futures positions.”

Gold trades just below $1,230 this morning. With stock market volatility, strong gold demand and hedge fund miscues all still in play… Jim sees it moving toward $1,300 over the next few weeks.

In theory, the rules prevent tech giants and their partners from encouraging internet users to give up control of their data in exchange for “free” services.

In practice, as we said at the time, the effect is to give Facebook and Google a massive leg up. They’re big enough that they can easily scale up to meet the bureaucrats’ requirements — something that scrappy upstart competitors can’t do.

Fast-forward to the present: “In separate addresses in Brussels on Wednesday, Apple’s chief executive Tim Cook and Erin Egan, Facebook’s privacy chief, threw their weight behind legislation that would give American citizens equivalent protections to those given to Europeans under the EU’s General Data Protection Regulation.”

We imagine they’ll find a receptive audience on Capitol Hill. Unfortunately, it will only tighten the unholy alliance between Big Government and Big Tech — and free expression will be a casualty.

“Unsurprisingly, government is ‘the worst dealer I’ve ever had,’” says a submitter at Fark — the site where people work up snarky headlines on very real news.

Legal recreational cannabis in Canada is now eight days old… and in the country’s biggest province it’s not going well.

The only legal retailer in Ontario is the Ontario Cannabis Store — a subsidiary of the Liquor Control Board of Ontario. Yes, it’s a government-run retailer. And it’s run with all the efficiency of the infamous state liquor stores in Pennsylvania.

“OCS opened Oct. 17,” reports the CBC, “but one week later many customers who purchased marijuana online still haven’t received their orders. Many who’ve tried to contact the store say the phone number is out of service and their emails have gone unanswered. ‘This is above and beyond the worst dealer I’ve ever had,’ said Alex Newcombe, a longtime advocate for pot legalization.”

The CBC, checking out Newcombe’s story, called the store’s toll-free number on Tuesday… and waited two hours before someone picked up.

“All the customers who spoke to CBC said unless the store cleans up its act, they will likely turn to other means of getting their cannabis, either through medical providers or illegal sources.”

For its part, a statement from OCS blames “unprecedented demand” and a postal strike for delays. OK, but does it explain this? 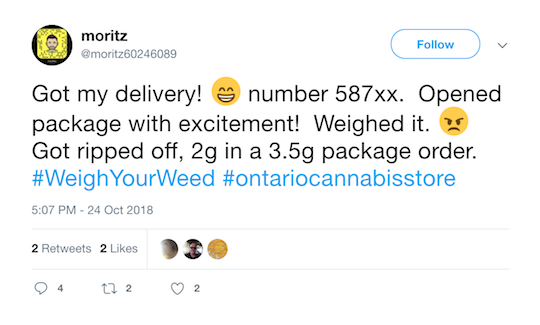 But as we said last week, Canadian researchers figured demand would outstrip the legal supply by nearly three-to-one during the first year of legalization. So we won’t rag on our Canadian friends too much here. Besides, the taxes really are easy compared with, say, California. Long term, that ought to keep a lid on black-market activity.

Meanwhile, marijuana is on the ballot in four U.S. states next month… and it could be the proverbial game-changer for select stocks in the cannabis space. More about that starting on Monday…

No, it won’t let you retire tomorrow. But you could kick-start your retirement plans tomorrow. And follow up with a few clicks of a computer mouse every Friday after that… setting yourself up for weekly payouts five times the size of a typical Social Security check.

It’s not for everyone. The only way you can decide whether it’s for you is to follow this link.