A Backdoor Entry to the IPO of the Decade

“The most important three words in investing are: ‘I don’t know,’” says James Altucher. “If someone doesn’t say that to you, then they are lying.”

Seemed appropriate to start our issue today with something James said at Medium in December 2017. It’s honest, humble and applicable after this week’s wild swings at the markets

Financial wonks, pundits and talking heads are lining up, offering their best guesses as to what’s happening. The Dow dropping 600 points Wednesday? (Well, it kinda rebounded, allowing for marginal gains this year. But then we got “disappointing” earnings from two FANG stocks. More about that later…)

So how many pundits will say these three simple words: I. Don’t. Know.

We’ll take a second to reintroduce you to James…

Around Agora Financial, he’s become known as the “crypto guy” because James knows gobs about digital currency, believes in the stuff…and still does.

But before his crypto days, James was a venture capitalist, hedge fund manager and angel investor.

“I’ve run a hedge fund that was successful,” says James. “I’ve probably analyzed the track records and strategies of about 1,000 different hedge funds.

For example, Uber’s first round of investment was a $1.5 million angel deal from First Round Capital. To give you an idea, those “first-rounder” shares are now worth more than 2,000 times the cash initially ponied up.

(No word if James was one of those early-round Uber investors; he’s entitled to keep things close to the vest.)

But one thing’s clear — James believes in Uber.

“Don’t worry if you’re not already making a fortune on Uber in the private market,” James says. “It’s not your fault.”

“Unless you’re one of Silicon Valley’s privileged insiders, you hadn’t a snowball’s chance in hell of getting in on this pre-IPO investment.”

But James has a “pre-IPO strategy” to “piggyback on Uber’s growth before it goes public.” James believes that’s not far off; he hears the IPO-filing papers rustling now…

And James sees a lot of upside in Uber’s future — particularly when it comes to its ongoing need for IoT technology.

Remember, IoT — the internet of things — is “a system of interrelated computing devices, mechanical and digital machines, objects, animals or people that are provided with unique identifiers (UIDs) and the ability to transfer data over a network without requiring human-to-human or human-to-computer interaction.”

That definition comes from TechTarget… and it covers all the bases.

By the way, animals? We’re scrambling to figure that one out. Our best guess: Pets with identification chips.

As for people, did you know thousands of people in Sweden have voluntarily been “chipped” since 2015? The chips transmit everything from payment to health information. (Seems more problematic than pragmatic, if you ask us.)

At the end of the day, IoT is the thing that allows your toaster to communicate with your oven… Imagine that conversation. Heh.

James says: “In fact, [Uber’s] continued success is directly linked to the expansion of IoT.

“So much so that investing in the burgeoning IoT market is like finding a backdoor play on Uber,” James continues, “before the company’s IPO.”

And that’s crucial because the “big gains in Uber have already been made in the private market.

“Once that [IPO] happens,” James says, “it will be front page in The Wall Street Journal.

“And it will already be too late. The insiders will have pocketed all the biggest and fastest gains by then.”

Since you can’t buy into Uber, what does James suggest you do as a backdoor way into this hot IPO?

He’s got a bead on “a major player in some of the biggest growth markets in technology.”

If you want to learn more about the best backdoor way to play Uber’s growth over the next few years, click here to get James’ report Pre-IPO Prospectus.

He’ll give you the inside track on a way to invest in Uber’s dominance even before it goes public… with “100% upside potential over the next 12–18 months.”

To the markets, where the first guess at the Q3 GDP is 3.5%, notably down from 4.2% last quarter… which “does raise some fundamental questions about the outlook for the economy,” Econoday says.

Turning our attention to the market story of the day: Amazon and Google earnings… and they both reported big-time beats. So what the…?

“This marks the first back-to-back revenue misses for Amazon in almost four years,” he continues, “as growth at the company’s cloud-computing business slows.”

In pre-market trading, Amazon shares were down about 9% — that’s in line with an opening price we haven’t seen in five months. 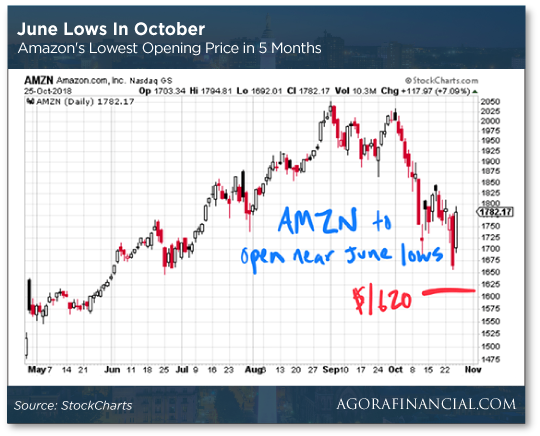 Google’s in on the action too; “Alphabet (Google) also missed analyst expectations as growth slowed in its search and video segments. The stock is down about 5% in early trade.

“Thanks to the dual Amazon and Alphabet earnings misses,” Greg says, “the Nasdaq is already on track to drop almost 2% at the opening bell.”

That might be a harbinger of things to come today as any gains the markets mustered yesterday will probably be canceled.

“The long-term, historical evidence is undeniable: Real estate has beaten the pants off stocks,” says our retirement and income expert Mike Burnick.

That’s saying something coming from Mike — a self-admitted “dividend stock junkie.” But he can’t argue with the numbers…

And — yes — that includes the Great Recession. 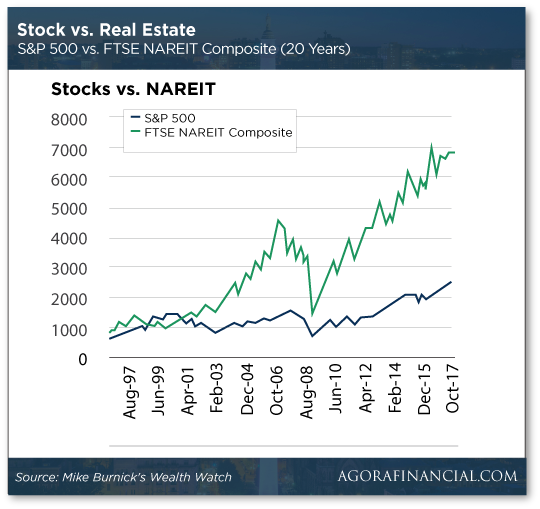 “This month,” says Mike, “I’ve found a way to profit from real estate without buying property. It’s as easy as buying a stock.”

This is an appealing option because “you take on a lot of financial risk when you own real estate.”

If you’re a homeowner, you already know the risks:

Not to mention if the neighborhood kid bounces off the trampoline in your backyard… heh.

As Mike already mentioned: “There is a much easier, low-stress way to invest in real estate without all the hassles of being a landlord.

“Because of their size,” Mike says, “REITs can borrow at lower interest rates, invest in higher-quality properties, rent them out to first-class tenants and have full-time professional staff to manage those properties.”

“REITs have deep pockets and can finance big-dollar improvements — such as large-scale expansion, multimillion-dollar remodels and rezoning applications — that can dramatically increase rental income and the property value.”

REITs were once overleveraged — no more. “Leverage, of course, increases risk, which is why the average REIT uses only 30% leverage today, not 80%.”

“It can take several months to sell real estate,” says Mike. “But REITs trade just like stocks, which means that you can buy or sell anytime you want with minimal transaction costs.”

Finally — and perhaps most compelling — “REITs are especially attractive to income-focused investors because they must, by law, pay out 90% of their earnings as dividends, which results in dividends that are TWICE as high on average as those of S&P 500 companies.”

“According to Realtor.com’s annual Haunted Real Estate report, one in three people — especially millennials — are willing to take a chance on a haunted house,” Fox Business says.

A case of beggars can’t be choosers? That’s no slight on millennials…

Of course, a realtor might have to sweeten the deal to persuade a buyer to purchase the house on the block trick-or-treaters avoid.

“Topping that wish list, according to the report, was a big discount at 15%, followed by a tie of either a larger kitchen or a better neighborhood at 9%. 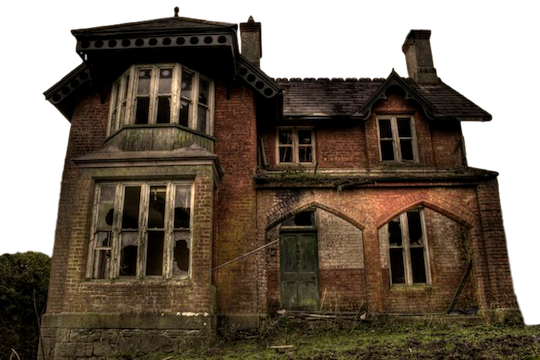 “Out of all demographics, millennials were the most price-sensitive, with 17% persuadable by a lower price tag despite the added unwanted company.”

Almost an equal percentage of those surveyed said they wouldn’t need any incentive to buy a haunted home — we worry about them — with about 25% between the ages of 35–54 saying they wouldn’t be deterred from buying a house because of an alleged haunting.

To which we ask: Gen X, have you learned nothing from ’80s horror movies? C’mon… Poltergeist?

We’ll chalk it up to the hypnotic effect of the Ghostbusters theme: I ain’t afraid of no ghost!

But guess who is? “The older generation in particular” — umm, they’re called baby boomers — “was the most reluctant, with 61% over the age of 55 tossing the idea out.”

Here’s a question we’d like to see on next year’s Haunted Real Estate survey: Would you buy a house on Elm Street?

P.S. Think you can’t get in on a pre-IPO opportunity?

While that action’s mostly gobbled up by millionaire investors, James Altucher has a backdoor play into one of the hottest IPOs out there.

But don’t wait… Uber’s about to file SEC paperwork to go public in 2019. Once that happens, Wall Street insiders will be the first to the table.