Who says it’s just the young and middle-aged taking advantage of legal marijuana?

As we showed once again last week, polls consistently reveal the “Silent” generation — those born before 1946 — as the only age cohort where support for legalization is still under 50%.

But here comes some fascinating data from the Journal of the American Geriatrics Society. Researchers surveyed older adults at two ambulatory geriatric primary care clinics in Colorado — the state that’s led the charge for legalization.

One in three respondents reported using cannabis since legalization in 2014. And one in six said they’re current users. They partake of the herb to cope with pain, anxiety or depression… or to stimulate appetite.

Yes, it’s a small sample size… but the numbers reinforce earlier findings from an exhaustive study in Israel: Cannabis use among seniors correlates with “significant improvement” in their “overall quality of life.”

“Thirty-one states and the District of Columbia currently have laws broadly legalizing marijuana in some form,” says Governing magazine. 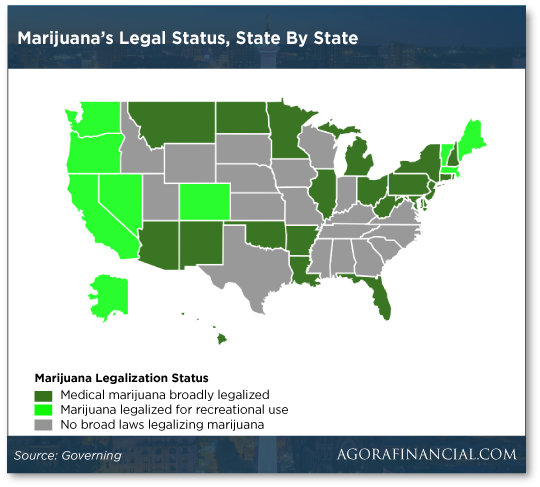 By and large, that’s medical marijuana. But recreational use is legal in nine states. And come election night a week from tomorrow… that total could grow to 11 as voters decide on legalization referenda in Michigan and North Dakota.

If either one passes — and there’s a good chance both will pass — it would be the first time recreational weed is legalized somewhere outside the West and the Northeast. Moreover, Michigan and North Dakota were both “red” states in the 2016 presidential race.

To date, measures legalizing recreational weed have failed only twice — and they’re worth examining briefly.

Voters in Ohio rejected a referendum in 2015. We described the problem with it at the time. It was a blatant exercise in crony capitalism.

The measure specified only 10 locations in the state where growing pot would be allowed — locations that well-connected investors had already snapped up. (They included former NBA star Oscar Robertson and aging boy-band sensation Nick Lachey.) 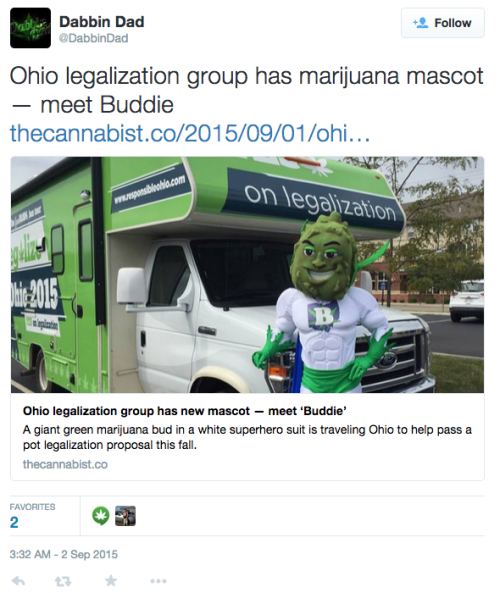 The other failure came in Arizona in 2016 — thanks to heavy spending by the law enforcement lobby.

Granted, every state has a powerful law enforcement lobby, but Arizona’s is stronger than most. After all, it’s the place where Joe Arpaio — “America’s toughest sheriff” as he styled himself — was a folk hero for decades. (Ironically, he lost his reelection campaign the same day the pot referendum failed.)

Neither of the factors that doomed the Ohio and Arizona measures is in play this year.

The Michigan measure appears likely to pass. An average of six polls conducted since February reveals support of 54%.

North Dakota is less certain. It’s a small state, so polling data are thin. But the two most recent polls this month show a substantial number of undecided voters — way more than the polls’ margins of error.

Maybe even more noteworthy is that medical marijuana is likely to win approval next week from voters in Utah.

And not by a slender margin, either. Despite opposition from the Mormon church, polls indicate two-to-one support in this reddest of red states.

Between the Utah vote — Utah! — and the first move to legalize recreational use in the Midwest… it’s little wonder our penny pot stock authority Ray Blanco expects a massive boost for a few select names in the sector.

He’s so excited, in fact, that he’s teaming up with TV host Montel Williams for a special election night event, one week from tomorrow.

Why Montel? As you might already know, he’s a huge cannabis advocate — using it himself to treat the symptoms of multiple sclerosis, which he’s suffered for nearly 20 years.

Ray has three companies in mind that he says are poised for the biggest post-election gains. If you’ve missed out on the massive gains this sector has already served up… this is your chance to make up for lost time.

The event is set for Tuesday, Nov. 6 at 8:00 p.m. EST — as soon as the polls close across most of Michigan. Signup is FREE… but space is limited. Here’s the link where you can secure your spot right away.

The stock market volatility that’s dominated October is carrying into the final week of the month.

In addition, our chart hound Greg Guenthner is spotting a potential bottom in both the bombed-out homebuilder sector… and in small-cap stocks. “Since these are the stocks that dragged the market into the gutter,” he says, “there’s a good chance they’ll tip us off to a sustainable rally and a shot at that elusive tradable bounce we’ve been searching for.”

⇒ The “Year of the Takeover,” as our income expert Zach Scheidt has called 2018, is rolling on with IBM announcing plans to acquire Red Hat for $33 billion. IBM hopes the move will up its presence in the cloud computing space — at a time Amazon’s dominance in that space is starting to look shaky.

The currency markets are on the move with news that German Chancellor Angela Merkel is stepping down as the leader of her party and won’t seek re-election as chancellor in 2021. The euro has slipped against the dollar to $1.138.

Americans are spending out of an empty pocket as the post-2008 boom approaches its late stages.

The “income and spend” figures from the Commerce Department show consumer spending up 0.4% in September. But personal incomes grew only 0.2% — only half the growth the “expert consensus” was counting on.

Perhaps not coincidentally, both Capital One and Discover have confirmed they’re tightening lending standards on their credit cards.

Meanwhile, the Federal Reserve’s preferred measure of inflation — “core PCE,” it’s called — rings in right at the Fed’s 2% target. Expect the Fed to bump up interest rates again in December; traders in fed funds futures are pricing in a 70% likelihood this morning.

Yikes… Even after the tax cuts of the last year, the United States is still in the back of the pack when it comes to having a competitive tax system.

So says the International Tax Competitiveness Index, compiled by the Tax Foundation.

Out of the 35 countries that belong to the Organization for Economic Cooperation and Development, the United States ranks No. 24. At least that’s up from last year’s 28th-place ranking — an improvement the researchers chalk up to lower personal and corporate income tax rates.

But other factors are a big drag — a progressive tax system with a top rate of 46% (once you include payroll taxes) and high real property taxes. Plus, America is one of the few countries that does not exempt income from foreign capital gains. “It ranks as one of the most onerous international tax systems of an OECD nation,” say the researchers.

Who’s better and who’s worse, you ask? Behold the top and bottom five… 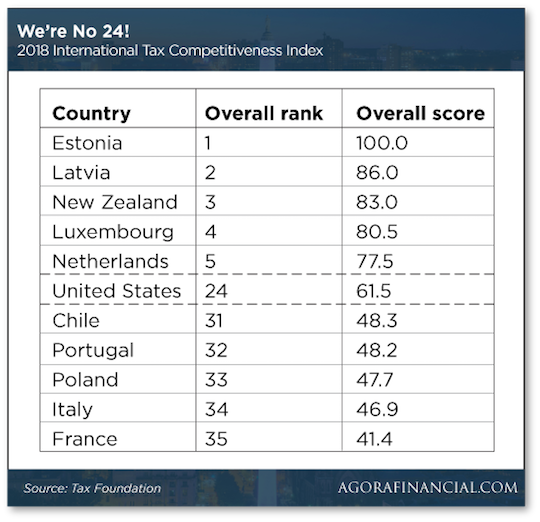 Huh… Two ex-Soviet republics rank the highest. Meanwhile, France is rock-bottom despite the reform efforts of President Emmanuel Macron — for which he’s been rewarded with general strikes.

Because the Bay Area doesn’t have a monopoly on crazy-high real estate prices, behold the most pricey property on the market in all the nation… 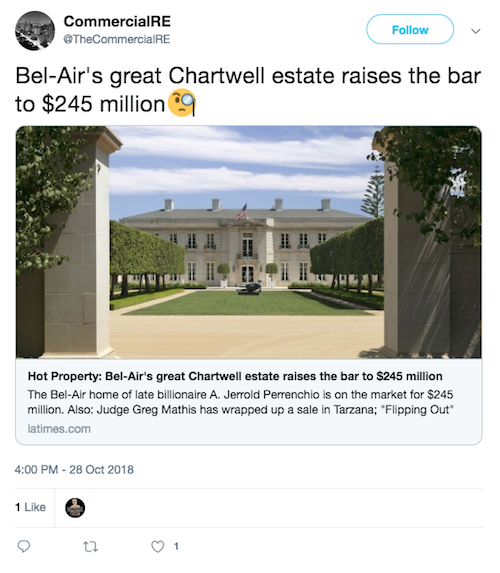 This French Neoclassical mansion is called Chartwell, located in Los Angeles’ Bel Air neighborhood. If it looks vaguely familiar… it’s the exterior that was frequently seen on The Beverly Hillbillies.

In recent years, the property was owned by media magnate A. Jerrold Perenchio, who died last year at age 86.

“The 25,000-square-foot mansion, which dates to 1935, was designed by architect Sumner Spaulding and built for civil engineer Lynn Atkinson,” reports the Los Angeles Times. “Perenchio acquired the property and three contiguous parcels in 1986, becoming the estate’s third owner.”

Listing price, you wonder? Well, as the saying goes, if you have to ask…

Even if it goes for only half that figure, it would set a record for Los Angeles County.

We heard from a Canadian reader after we took note of a huge cannabis shortage in Ontario under Canada’s new legalization regime.

As a reminder, the only legal source in Canada’s biggest province is a state-run store — with all the efficiency you’d expect from the gummint.

“I used to buy cannabis online (black market),” our reader writes. “Fantastic service, prices and selection. I remember ordering on a holiday Monday and having my order on Thursday two provinces away. These were small businesses run by entrepreneurs who loved what they did. (Orders were always overweight.)

“So imagine some of the provincial governments. They opened a provincewide store (monopoly) in a business they knew nothing about and had no real interest in. They were wildly successful from the start. Of course they couldn’t keep up.

“Alberta government runs an online store but they are running out of product. British Columbia used to have hundreds of private storefronts. Most were forcibly closed prior to ‘legalization’ with no real plan for replacing them.

“Now BC (famous home of BC bud) has one government-run store, faraway from the population centers. Online purchases are available but I think they also have supply problems.

“In my opinion governments have quite a way to go before they end the black market.”

The 5: Yeah, can’t say we’re surprised. At least the taxes in Canada are low relative to some of the U.S. states that have legalized. (We’re lookin’ at you, Taxafornia…)

P.S. America’s No. 1 Pot Stock Authority, Ray Blanco, is just back from a trip overseas scoping out medical cannabis opportunities.

We’ll bring you an on-site report later this week. But for now, you should know Ray couldn’t be more excited by the prospects for huge gains spurred by another series of ballot measures up for a vote on Election Day a week from tomorrow.

Really, when Utah is on the verge of approving medical cannabis by a 2-to-1 margin… you know something huge is afoot. And Ray wants you to be ready.

It’s set for Tuesday, Nov. 6 at 8:00 p.m. EST. It won’t cost you a thing to watch. All we ask is that you submit your email address so we can send you a reminder as we get closer to the day. Click here for more details on the signup page.