Phooey on The American Dream

It’s come to this: Five out of eight jobs in America can’t support a middle-class lifestyle.

That’s according to an outfit called Third Way, described by USA Today as “a think tank that advocates center-left ideas.”

Third Way’s study finds 62% of jobs fall short of middle-class standards when considering both the pay and — this is critical — the cost of living in the metro area where the job is located.

Within that 62%, about half are characterized as “living wage” — that is, enough for a single childless adult to share a two-bedroom apartment with another self-sustaining adult. The other half fall below even that modest standard and are considered “hardship jobs.” 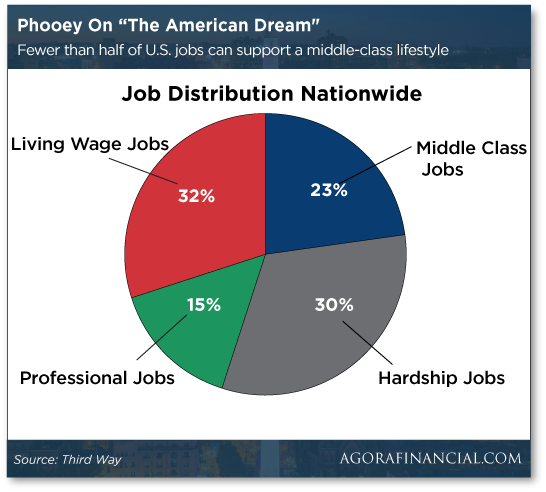 The American Dream Is Killing Us,” is the title of a 2016 article by Mark Manson at the Observer website

Manson is an older Millennial (born 1984), author of a book called The Subtle Art of Not Giving a F*** and a periodic guest on the podcast of Agora Financial contributor James Altucher.

“The American dream is simple,” he wrote: “It’s the unwavering belief that anybody — you, me, your friends, your neighbors, Grandma Verna — can become exceedingly successful, and all it takes is the right amount of work, ingenuity and determination. Nothing else matters. No external force. No bout of bad luck. All one needs is a steady dosage of grit and ass-grinding hard work. And you too can own a McMansion with a three-car garage… you lazy sack of s***.”

In other words, do all the right things — get the good grades, get the degree, get a good job, yada yada — and you’re set for life.

If it was ever true, it sure isn’t now. “By almost every major statistical measurement,” Manson wrote, “the average American is worse off than they were a generation ago.”

But you knew that already, at least instinctively, right?

Today we want to introduce you to a fellow who’s known for decades that doing the “right things” to achieve the American dream is an illusion. You might be familiar with him already.

His biological father pursued the conventional route to the American dream. “He had a Ph.D. and completed four years of undergraduate work in less than two years. He then went on to Stanford University, the University of Chicago and Northwestern University to do his advanced studies, all on full financial scholarships.”

But he tells of another father figure in his life — the dad of a childhood friend. “He never finished the eighth grade.

“Both men were successful in their careers, working hard all their lives. Both earned substantial incomes. Yet one always struggled financially. The other would become one of the richest men in Hawaii. One died leaving tens of millions of dollars to his family, charities and his church. The other left bills to be paid.”

It was his biological father who never could get off the hamster wheel. It was his role model with the junior high-school education who amassed a great fortune.

Maybe you’ve figured it out already. We’re talking about Robert Kiyosaki, whose 1997 book Rich Dad Poor Dad tore apart the conventional wisdom about the American dream  — well before the dot-com bust and the Panic of 2008 destroyed the wealth and livelihood of millions.

In the years since, he’s authored or co-authored 25 other books — conveying the wisdom he’s amassed as an entrepreneur and investor. His multimillion-dollar real estate empire provides him and his wife Kim with tax-free cash flow year after year.

He’s educated millions through his Rich Dad Co. and through media appearances on CNBC, Fox Business and Bloomberg.

And now he’s taking his educational outreach to an entirely new level.

Mr. Kiyosaki is the latest — and to date the biggest-name — addition to the growing Agora Financial team.

With that announcement out of the way, let’s get back to our story…

My two dads had opposing attitudes and that affected the way they thought,” Robert elaborates.

“Although both men had tremendous respect for education and learning, they disagreed about what they thought was important to learn.

“‘I don’t work for money!’ were words he would repeat over and over. ‘Money works for me!’”

The problem with the conventional route? “Sadly, money is not taught in schools,” Robert laments.

“Schools focus on scholastic and professional skills, but not on financial skills. This explains how smart bankers, doctors and accountants who earned excellent grades may struggle financially all of their lives.”

That parental ignorance gets transmitted from one generation to the next. “What can a poor parent tell their child about money? They simply say, ‘Stay in school and study hard.’ The child may graduate with excellent grades, but with a poor person’s financial programming.”

And the tragedy goes far beyond the personal level: “Our staggering national debt,” Robert points out, “is due in large part to highly educated politicians and government officials making financial decisions with little or no training in the subject of money.”

“But my concern is that too many people are counting on President Trump to save them,” says Robert.

As you can surely imagine, we share that concern here at The 5. But Robert speaks with the authority of someone who’s co-authored two books with Trump. (Robert hastens to add he is neither Republican nor Democrat.)

“I doubt he can save anyone,” says Robert, “unless they are first willing to save themselves.”

If you’re a truly long-time reader, you know Agora Financial executive publisher Addison Wiggin’s guiding principle — the one that animates everything we do around here — is the French expression sauve qui peut: “Let he who can, save himself.” Don’t outsource your prosperity to the politicians. Any politician.

It’s only fitting that Robert Kiyosaki and Agora Financial are coming together at this moment. We’ll be hearing more from Robert in the days and weeks to come. Even if you’re already familiar with his work, we daresay you’ll start to think about your relationship with money in a whole new way.

The major U.S. stock indexes are calming down after a daylong bout of volatility that was extreme even by recent standards.

Alas, Amazon is sliding further into “bear market” territory — that is, a 20% decline from its peak on Sept. 4.

“Amazon was the last of the FANG stocks treading water above its 200-day moving average,” points out our chart hound Greg Guenthner. “No more.” AMZN and its richly valued compatriot Netflix (NFLX) are both in a bear market now. “It’s safe to say that the Silicon Valley darlings have lost their untouchable status.”

Another stinker today? General Electric, down 4.5% after once again slashing the dividend — this time to just a penny per share. The new CEO Larry Culp hopes the move will shore up GE’s fortunes long term, but short term the Street doesn’t like it one bit.

Gold is backing off slightly at $1,224. Crude is selling off again, a barrel of West Texas Intermediate pushing two-month lows at $65.79.

Now that the stock market has breached 10% correction territory, is a 20% bear market next?

“To help answer that question,” says income contributor Mike Burnick, “I turn to my favorite bear market indicator, which is as simple for you to follow as it is effective at predicting market declines.” 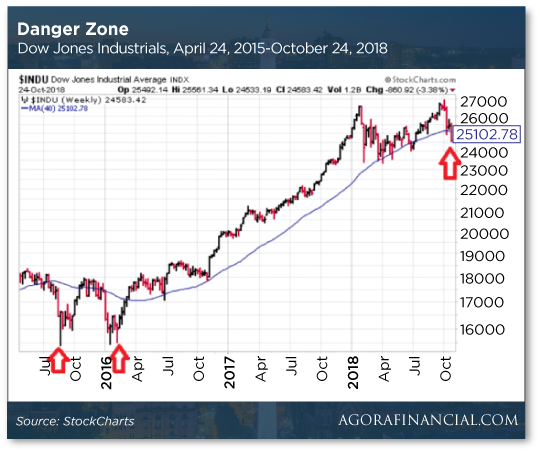 Danger zone? You bet. “If the Dow (or S&P 500, Nasdaq, etc.) closes below its long-term 40-week moving average at the end of a calendar month,” Mike explains, “it means further share price declines are likely, and a bear market often follows.”

The number to watch on the Dow — 25,100. We’re about 500 points below that threshold. And the end of the calendar month is tomorrow. For this month, we’ll call it “the Halloween indicator.”

“This indicator isn’t perfect and has thrown off some false signals,” Mike allows. “However, it correctly predicted the last two major bear markets: the dot-com bust in 2000 and the housing bust and financial crisis in 2007.

“The last time this signal triggered was back in 2015 and again in early 2016. Fortunately, those triggers did not result in a bear market decline of 20% or more, BUT the Dow did fall over 15% back then.”

We’ll keep you abreast the rest of the week…

This is an extremely exciting time to be a marijuana investor!” enthuses our penny pot stock authority Ray Blanco.

“On the opposite end of the cleanliness spectrum, I’ve also literally muddied my boots walking through vast greenhouses watching how those strains go from mother plants to clones to harvested buds to purified extracts rich in health-granting cannabinoids and terpenes.

“From what I am seeing, massive new opportunities are about to break through in not just the U.S. and Canada but new regions beyond as the world warms up to the medicinal potential of the cannabis plant.”

And as we mentioned yesterday, Ray sees the next catalyst in the sector one week from today — Election Day, with crucial ballot measures in four states. That’s why he’s teaming up with TV host Montel Williams for a first-of-its-kind event — where Ray will talk about some of his favorite names in the pot space that are poised for a post-election breakout.

P.S. A reader writes in with a cannabis-related item: “Why is Canopy Growth Corp. (CGC) way down with all the good news?”

The answer is that penny pot stocks are getting dragged down with the rest of the market the last few days.

But from where Ray Blanco sits, that means a more attractive entry point for select names. “Near-term weakness in the stock market might present us with some major opportunities as weak hands get shaken out.”

As for Canopy Growth, Ray was on board with that one early. He urged his Penny Pot Profits readers to sell and collect 420% gains — serendipity with that 420 figure, huh? — earlier this month.

Again, Election Day one week from today stands to be huge. Michigan will likely be the first Midwestern state to approve recreational cannabis… and in Utah, medical cannabis is polling 2-to-1 in favor.

“When election night concludes on Nov. 6,” says Ray, “I expect a ton of flash action sparking a new pot boom to close out the year.”

Even if you’re a political junkie, it’s worth tuning away from the cable channels for an hour so you can get clued into the massive profit opportunity at hand. One more time, here’s the signup link.