“We would probably all agree that we should ditch junk food and eat well instead of taking pills,” says an article at The Guardian. “But realistically, telling people to ‘eat good food’ isn’t going to cut it.”

The article — “Butter Nonsense: The Rise of the Cholesterol Deniers” — goes in depth to rebut claims made at the British Journal of Sports Medicine. The journal’s published 10 pieces of late promoting a low-carb, high-fat diet and denouncing statin drugs.

At least in the U.K., the voice of dissent on diet versus statins comes from cardiologist Aseem Malhotra, who says: “Coronary artery disease is a chronic inflammatory disease and it can be reduced effectively by walking 22 minutes a day and eating real food.”

“There is a serious cost to public health from making misleading claims,” says Professor Rory Collins of Oxford University, “that inappropriately dissuade people from taking statin therapy despite the proven benefits.”

In fact, Collins compares Dr. Malhotra and his ilk to flat-Earthers and challenges Malhotra’s anti-statin position, citing a 2016 study at The Lancet that concludes lowering cholesterol by taking a daily statin over five years:

Honestly, those numbers aren’t exactly mind-blowing… to say nothing of statins’ unwelcome side effects. 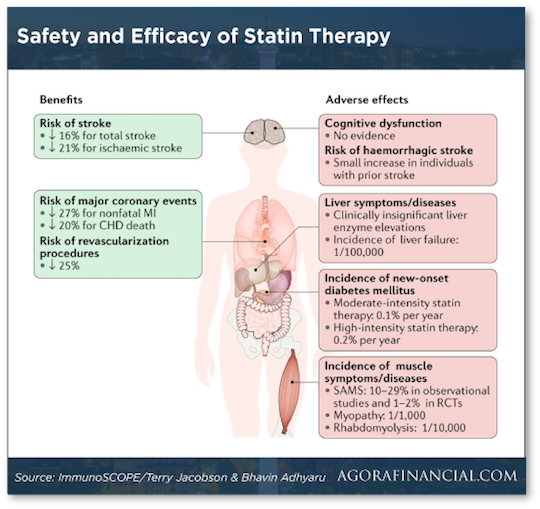 “Our review shows that the numbers of people who avoid heart attacks and strokes by taking statin therapy are very much larger than the numbers who have sideeffects with it,” Collins continues.

He goes on to say most side effects can be reversed by simply discontinuing statins while heart attacks “cause permanent damage.”

(Ummm…*gulp*… the damage can’t get any more “permanent” than death.)

“Consequently,” says Collins, “there is a serious cost to public health from making misleading claims about high side effect rates that inappropriately dissuade people from taking statin therapy despite the proven benefits.”

Whichever side of the debate you fall on, most would argue that a statin alternative’s — heh — just what the doctor ordered.

The first FDA-approved statin hit the market in September 1987… so yeah, it’s about time. And a small biotech company’s working on it.

Ray Blanco — our medical technology expert — says, “As early as today, this company will stun the world as they go public with clinical trial results of the treatment that will give hope to millions.”

[Ed. note: Not only is this welcome news if you’re one of 15 million Americans prescribed statins… it might deliver profits you’ve only dreamed of.

Ray’s been following this story for years and believes you could add as much as $550,186 to your bank account.

Starting TODAY your life might change forever. Click here for the full story. Please note: Because this announcement could come within the next few hours, we’re removing this presentation from the web at midnight tonight.]

To the markets where — in early – morning trading — the Dow’s jumped 300 points, just squeaking past the “Halloween indicator” we mentioned yesterday.

At last check, the Dow has inched above the 25,100 threshold — higher than the 40-week moving average. If that can hold by day’s end, the likelihood of a bear market is much diminished.

Facebook is up 6% this morning after delivering its quarterly numbers. FB beat expectations on earnings but missed on revenue.

Which is fine as far as it goes, but Amazon and Google did the same thing last week and the Street punished both of them mercilessly. So much for the theory of “rational” markets.

“Investors are having a rough month,” says Jonas Elmerraji.

To put it mildly…

“If you went on an extended vacation at the end of September and just checked back in on the stock market today,” says Jonas, “you’d wonder what the heck happened in such a short time frame.”

“Understandably, folks are wondering if we’re careening toward another 2008,” Jonas continues, and — yes — that’s top of mind for most investors.

“Let’s take a quick look at what the data say about that — and examine… the final stretch of 2018.”

As for data, Jonas offers up this disquieting chart: 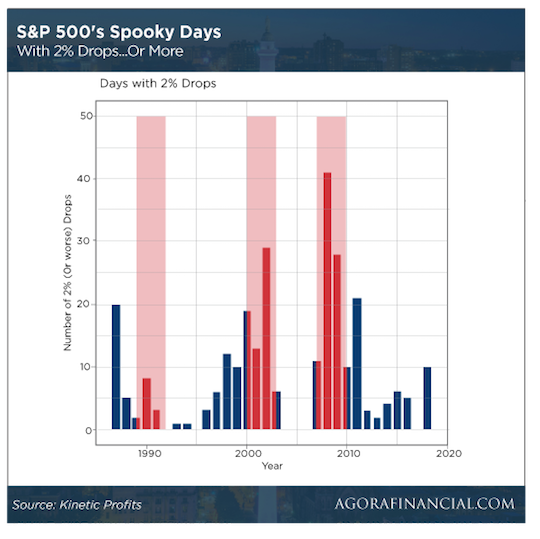 You can probably guess the red highlighted portions depict recessions. (In that case, perhaps they should be called lowlights.)

“So far this year, we’ve experienced 10 days that sunk the S&P 2% or more,” says Jonas. “That’s a meaningful number — it’s the largest number of volatile declines since 2011.

“A similar spike in 2% drops happened in 2007 and 1999 before crashes the following years.

“By itself, I think that’s far too little evidence to suggest that 2019 will be a terrible year for the stock market,” he continues. “But it’s worth having on your radar.”

For another take on how the markets are shaking out in October, we turn to our income-investment specialist Zach Scheidt…

This past week, investors became much more discouraged with the market,” he says.

And Zach’s not just talking anecdotal evidence here… or even the VIX measurement of volatility.

“The American Association of Individual Investors (AAII) keeps track of how investors feel about the overall market.

“And the weekly confidence reports issued by AAII give us some great insight into how investors are reacting to the current market environment. 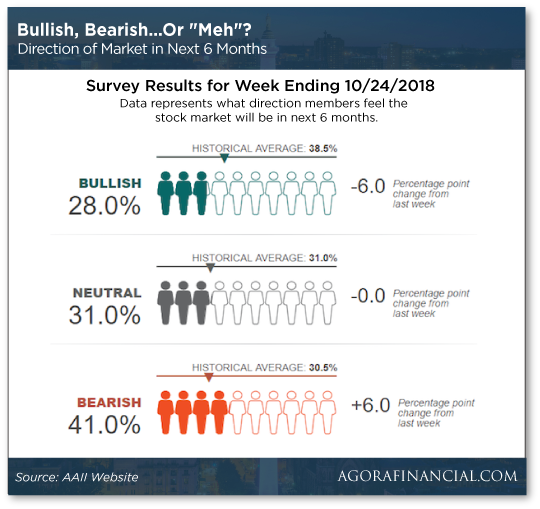 According to Zach: “The truth is that bearish sentiment is actually a very good thing for the U.S. stock market. Because as a general rule, this survey tends to be a contrarian indicator.”

Zach reasons when investors get spooked, they sell and sideline their cash. The more jittery, the more cash leaves stocks.

“That money is sure to come back into the market once the fear subsides,” says Zach. “And the money on the sidelines is certain to help push the market higher — specifically stock prices for companies that are posting reliable growth.

“So this current split-personality market — where consumers are excited and investors are worried — is just about the best spot we could hope for as investors.

“The consumer is bound to continue to push this economy forward,” Zach says. “And with so much money on the sidelines waiting to get back into the market, I expect stocks to rebound quickly.”

“The White House is planning on tackling cannabis reform after the midterm elections,” says an article at Fox Business.

“The president has spoken in support of legalizing medical marijuana on the federal level – and leaving the question of recreational marijuana use up to the states,” the article continues.

Up for re-election next week, the California congressman’s duking it out to hold onto his seat. As it stands, the opinion polls show he’s in a neck-and-neck race against his Democrat opponent.

And while recreational marijuana was legalized in California this year, it’s still illegal at the federal level, something Rohrabacher wants changed.

“I would expect after the election we will sit down and we’ll start hammering out something that is specific and real,” he said.

“It could be as early as spring of 2019, but definitely in the next legislative session.”

Meanwhile, we’re still expecting a sea change at the polls next week. Recreational cannabis is set for approval in Michigan — a first in the Midwest — and medical cannabis is poised for victory in deep-red state Utah. There’s still room if you haven’t signed up for our exclusive election night briefing on the penny pot stocks most likely to benefit.

“Republican Sen. Charles E. Grassley is demanding answers after learning the Air Force has been using taxpayer money to purchase coffee cups that cost $1,280 each,” The Washington Times reports.

Well, OK, they’re not just for coffee. The tumblers are for all manner of hot liquids. Tea, hot chocolate, tomato soup, ramen….

Sen. Grassley asked Air Force Secretary Heather Wilson why Travis Air Force Base in California had spent $56,000 on the “hot cups” over the past three years.

Turns out that figure was wrong. Like, really wrong.

In answer to Sen. Grassley’s inquiry — and in a classic case of military-splaining — Wilson wrote:

In July 2018, I directed creation of the Air Force Rapid Sustainment Office to further explore agile manufacturing (3D printing, cold spray, digital modeling, etc.) to develop and deliver parts at a fraction of the costs of using traditional manufacturing. Gen. Goldfein and I also directed this new office to complete a review of procurement to proactively identify items we may self-produce or other overpriced parts we need to stop buying without impact to the mission. The Air Force has recently demonstrated capability to 3D print replacement handles for this item at a fraction of the cost of complete cup procurement.

All that to say instead of buying all new tumblers when their handles break, they’ll 3D print replacements — for 50 cents each.

No word if they can print toilet seats…

“I live in California and I share your Canadian readers’ experience,” a reader says, “it is cheaper and more convenient to buy cannabis on the black market.

“I’d really rather not because in a dispensary there is variety and safe access.

“However, I just bought four ounces of chronic OG Skywalker for $370 and it came right to my door.

“I thought getting rid of the black market was the whole point?”

But who are we kidding? The government can’t resist that green… and we’re talking tax revenue.

P.S. Don’t forget… Today’s the day the treatment for heart disease might change for good.

Ray’s been following this story for years now and believes the opportunity to collect over a half million dollars in profits is finally here.

Discover for yourself why Ray believes TODAY might change your life forever. Don’t delay… this offer closes at MIDNIGHT.