“The NFIB Small Business Optimism Index continued its historic 23-month positive trend, with a reading of 107.9 in September, the third-highest reading in the survey’s 45-year history,” says the NFIB Research Foundation.

“This is the longest streak of small-business optimism in history, evidence that tax cuts and regulatory rollbacks are paying off for the economy as a whole,” says NFIB CEO Juanita D. Duggan. “Our members say that business is booming and prospects continue to look bright.” 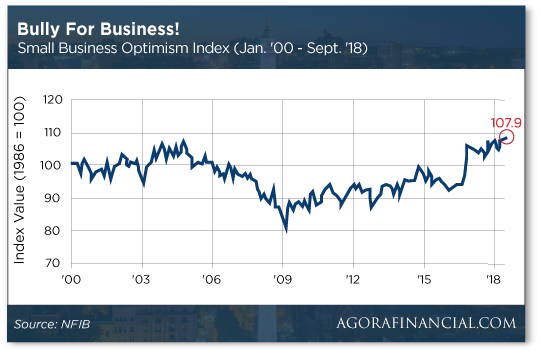 “Booming business” and the prospect of a bright economic future come with a catch: As work expands, the labor market shrinks.

The NFIB reports: “Sixty-one percent of owners reported hiring or trying to hire, with 87% of those reporting few or no qualified workers.

“Thirty-eight percent of owners reported job openings they could not fill in the current period.”

“We are projected to have about $1.3 trillion in construction spend this year,” says Mike Bellaman, president of the trade group Associated Builders and Contractors.

CNBC says: “Offering higher pay, better benefits and on-the-job training — and reaching out to groups of people who don’t fit the traditional mold of a construction worker — are just a few of the ways construction companies are dealing with an acute labor shortage.”

A tall order for employers — especially small-business owners — because sweetening the deal for employees requires something that’s generally in short supply… cash.

Robert’s the best-selling author of Rich Dad Poor Dad — the 1997 classic that encompasses his formula for financial success.

He says cash is to business what blood is to the body. So, yeah, important.

“Proper cash flow management begins on the first day you start your business — and it never stops from there.”

Reflecting on building a business with his wife, Robert says: “When Kim and I started The Rich Dad Co., we agreed that no purchase would be made if it were not justified by an increase in sales.

“We often chuckle about our strategy for increasing book sales early in 1998 so we could buy a $300 copy machine,” says Robert.

“It was this attention to detail in the early stages of our business that set the tone for our success,” Robert says. “And it will for you too.”

(Hang in there… even if you don’t own a business, if you’re adulting — as the kids say — you’re managing cash.)

“Many businesses forget that a crucial part of cash flow is managing their own bill paying,” Robert says. “Make sure you pay your bills promptly.

“Also, keep your overhead to a minimum,” and, he says, “before purchasing something, set a goal to increase sales to justify the expense.”

That goes back to the “B” word… budget. In order to add another line item, you have to free up cash to do so.

“When you do business with others,” says Robert, “you deserve to get paid. Plain and simple. It’s your job to make sure you collect.”

Getting paid is sorta the point, right? Of owning your own business or running a side hustle or even working a traditional 9-to-5.

In other words, you’re your best advocate.

Robert suggests: “Leverage technology like direct deposit or online payment to speed up the revenue stream.”

“Each step of cash- flow management is crucial to the success of your business,” Robert says. “So don’t be afraid to ask for help.”

Everyone needs a team: “Call on your accountant, banker and personal financial adviser for advice in structuring your cash flow management systems.

“This allows them to plan for any large cash needs before they become cash crises.

“By following these cash flow tips,” he says, “you will go a long way toward ensuring your business success.”

[Ed. note: Robert Kiyosaki, author of the No. 1 best-selling personal finance book Rich Dad Poor Dad is about to join our family in just two more days — on Wednesday at 1 p.m. EST.

Since Robert is all about cash flow — during this massive welcome event — Robert and his team will reveal a brand-new way of making anywhere from $840, $4,540 to even as much as $10,600 on a weekly basis.

Robert’s calling it The Weekly Cash Flow Summit and it’s FREE to watch online… but space is limited.

To the markets… where the Dow’s cratered 450 points. Leading the way in a sell-off across all markets? Apple.

The tech giant’s supplier of facial-recognition technology — Lumentum Holdings — cut its outlook for Q2 2019. On the news, Apple shares lost 4.5% while Lumentum is down 35%… yikes.

Oil is up for the first time in 11 days; it’s back above $60 — almost $61 — with buzz that Saudi Arabia will slash exports next month.

Hmmm… maybe because it doesn’t have enough inventory to meet current export levels?

Here’s something no one’s talking about: “On Jan. 1, 2020, the world is going to lose a huge chunk of its current daily oil supply,” says our Zach Scheidt.

“The exact amount is hard to predict,” he says. “Some people expect it to start at 1.5 million barrels per day and go higher from there.”

Zach says that’s enough oil to eliminate almost every drop of spare oil production… in the world. “Just as importantly,” he says, “it is going to happen overnight — taking a lot of people by surprise.”

Zach says: “The problem starts on the high seas.

“Up until relatively recently, ships crossing the globe could run on something called high-sulfur residual fuel oil. It’s a byproduct of refining oil for other uses — essentially what’s left in the barrel after everything else has been made.

“It is the dirtiest, cheapest, most viscous oil on the planet,” Zach says. “Ships are essentially the only things that run on the stuff.”

As you can probably guess, burning the dirty oil releases sulfur dioxide into the air; under current law, ships can’t use fuel that contains more than 3.5% sulfur.

In 2016, the International Maritime Organization (IMO) — a U.N. agency — banned any fuel with a sulfur content greater than 0.5%. But the rule officially goes into effect on Jan. 1, 2020… and shipping companies have been predictably slow to comply.

Come 2020 — ready or not — “the shipping industry suddenly will need to find 3.6 million barrels per day of oil with a lower sulfur content,” Zach says.

“In other words,” he says, “3.6 million barrels per day of current oil production are effectively disappearing.

“Sure, some ships will try to cheat, if not ignore, the new rules outright. But any ship found to be burning the high-sulfur fuel could lose their insurance as it’s declared ‘unseaworthy.’”

Best-case scenario? The world only sees a deficit of 1.5 million barrels per day when the new law goes into effect… only.

Zach reminds: “It’s not like the world can suddenly start pumping oil to make up the difference.”

“Turns out when stocks have historically sold off in the month of October,” says Agora analyst Jonas Elmerraji, “stocks have rallied hard in the ensuing months without fail.”

Of course, this analysis only holds true for markets that aren’t in a protracted bear market, and last we checked, the bull market’s still got legs…

“Part of that is because the final two months of the year are statistically among the strongest.” 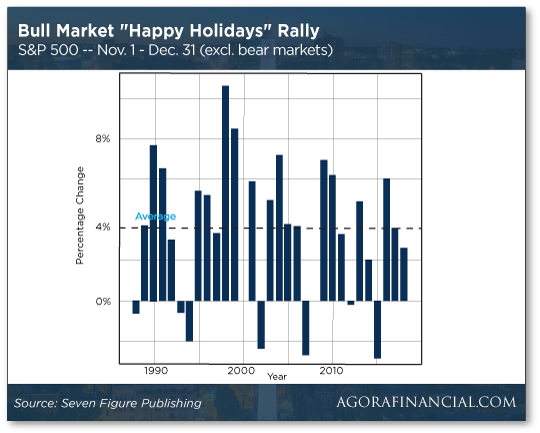 For the last three decades or so, the S&P 500 has pushed — on average — 3.4% higher in November and December. That average rises to 4.4% when October’s market has been particularly brutal.

And the news gets better: “We’ve also never had an October sell-off in a bull market that didn’t result in a market that was much higher 180 days later,” Jonas says.

“With the heightened volatility we’re seeing in 2018, I think it’s fair to make the case that this instance could be on the higher end of the gain spectrum.”

So that’s an early “Happy New Year” for investors…

“It might sound a bit crazy,” Justyna Kowalczyk tells the BBC. “She’s talking about her ‘Brexit box’ tucked under the kitchen table.”

The small box is filled with EU goods she fears she won’t be able to purchase after Brexit — March 29, 2019. Items including “bottles of tonic water, coffee and French marmalade” have made their way into the box.

“They’re hardly essentials for daily living but they’re all made in the European Union and Justyna says she’s simply making sure she’ll still be able to have her favorite products in the immediate aftermath of Brexit,” the BBC says. 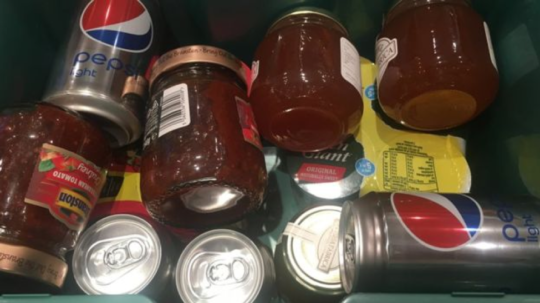 Keep calm and carry on: “The British Retail Consortium says there is no evidence of any widespread stockpiling of food.” But an informal survey of 1,700 shoppers shows about 2% say they’re stocking up ahead of Brexit.

There’s even a Facebook group called the “48% Preppers” — referring to the percentage of U.K. citizens that voted to stay in the EU — that’s compiled a 16-page booklet. It lists “nonperishable items, which can be prepared quickly and require little water.

So are preppers right to be concerned? The U.K. only produces about half the food the country consumes; the other half — especially fresh fruit and vegetables — is imported, mostly from the EU.

An expert in food systems from the University of Leeds, Professor Tim Benton, believes there could be “significant interruptions to food supplies.

“If disruption were to continue for more than a week, almost any food might start becoming difficult to get,” he says.

Benton thinks it makes “some degree of sense” to plan accordingly.

“Nevertheless,” says the BBC, “all official bodies advise against stockpiling.”

Hmmm… Y2K anyone? But if you did a little prepping for what turned out to be a nonevent in 2000, no harm, no foul, right?

P.S. Don’t forget to reserve your space for Robert’s Weekly Cash Flow Summit: Your spot is available for just a bit longer…

Robert’s headlining our biggest event of the year on Nov. 14 at 1 p.m. EST.

During the event, Robert and his team will reveal an innovative way to amp up your cash flow on a weekly basis… Regardless if stocks go up, down or sideways.

It’s FREE to watch online… but spots are filling up fast.