There’s No Cash Flow From Gold (And That’s OK!)

Sometimes gold performs its “flight to safety” function during a big stock market sell-off. And then there are days like yesterday.

The Dow sold off hard — more than 600 points, and we’ll address that later in today’s episode — but hot money did not flee into the Midas metal. Indeed, gold sank to a five-week low. This morning, the bid on gold clings to the $1,200 level — by closely cropped fingernails.

It’s times like these that try the souls of all but the most hardy gold bugs.

Still, gold kept charging ahead in workmanlike fashion… until last July when it broke below a “line in the sand” at $1,240 an ounce. A solid 2½-year uptrend was broken… and as we said then, the damage would take time to repair. 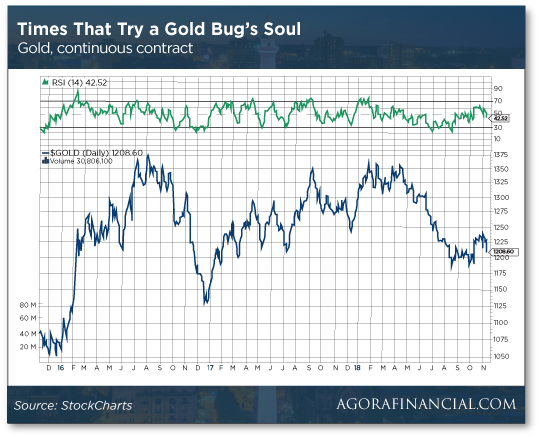 And that’s just the action in the last three years. For those who bought in the frenzy building up to gold’s all-time high at $1,900 in September 2011… well, they’re still licking some costly wounds.

Many have long since moved on to “the next big thing” — oblivious to gold’s timeless value that goes far beyond its day-to-day price in U.S. dollars.

“I love gold and silver,” says Robert Kiyosaki, author of the landmark personal finance book Rich Dad Poor Dad… the newest superstar addition to the Agora Financial family… and one of the hardiest gold bugs.

If you’re one of our longtimers with a fondness for gold, you’re about to discover a kindred spirit today. If you’re a newer reader who’s never thought much about gold before, your eyes are about to be opened.

“Gold was my ﬁrst real investment as a young adult,” Robert tells us. At the time, it happened to be a criminal act.

“In 1972, when it was still illegal to personally own the commodity, I began buying gold coins when gold was approximately $70 an ounce. By 1980, gold was approaching $800 an ounce and once again legal.”

For all the ups and downs in the dollar price of gold since then, Robert’s early shine for gold has never faded.

Here we have to address what must seem like a glaring contradiction: If, as we’ve been saying for days, Robert’s all about the cash flow… why would he give precious metals any love?

After all, the conventional knock against gold — and God knows Warren Buffett repeats it every chance he gets — is that gold has no yield. It doesn’t throw off an income stream like, say, a dividend stock… or the rental property that Robert’s used to amass a major chunk of his fortune.

“I love real estate because I invest for cash flow,” he readily acknowledges.

“But there is another way to invest,” he hastens to add: “hedging.

“When it comes to investing, a hedge is like insurance.

“For example, with every rental property I own, I create a reserve account. The reserve account ensures against unforeseen repairs and drops in income. The money is set aside to cover emergency expenses or a loss of rental income in case the tenants move out; it is a hedge against those losses.

“Silver and gold are two examples of a hedge. I don’t buy it because I think the price is going to go up — I buy to hedge against the dollar losing its value (which it has).

We’ll pause again to address a potential objection: How can precious metals be an insurance policy when they’ve performed so poorly for seven years now? (And for two decades after that $800 peak in 1980…)

“Paper currency is backed by nothing but a promise,” is Robert’s answer.

“It’s government-sponsored monopoly money. When the dollar was no longer backed by gold, it became fake money. The government issuing an IOU.

“That’s why buying commodities, like gold and silver, is a solid financial strategy. Gold and silver are finite resources. The government can’t create more whenever they want to like they do with the paper money in your wallet.

“They are also true money, meaning they have intrinsic value and can be used to purchase other items that have value.

“Currency, on the other hand, isn’t always valuable. For example, take out your wallet and find the highest bill you have. It could be $5 or $100. You probably feel good having a little cash in your hands.

“But take away the promise of the government and what do you have?

“A piece of paper. And that paper alone won’t buy you anything.”

“Now you know why I buy more gold and silver every time they drop in value in the current economic environment,” says Robert.

As always, for Robert it always comes back to education — the kind of financial education that’s sorely lacking in our schools. Where they teach what Robert calls the “old rules” about money.

“People who play by the old rules of money are hurt by inflation,” says Robert, “because they believe it is wise and prudent to save money in the bank.

“The bank plays by the new rules of money. They pay interest on money that doesn’t keep up with inflation. Money loses purchasing power as the bank uses your money to make more money.”

Wouldn’t you like to play by the new rules? You can’t set up a bank, but Robert has crafted a strategy just as good — if not better.

He’ll take the wraps off in barely 24 hours — during his debut event as an Agora Financial contributor tomorrow at 1:00 p.m. EST.

We’re calling it the Weekly Cash Flow Summit — because again, Robert’s all about the cash flow. And we’re talking about streams of cash anywhere between $840 to as much as $10,600 — week after week.

Because we’re so close to the day of the event, we can’t guarantee access once you click the signup link. All we can do is encourage you to follow the link and hope for the best.

The stock market swoon of yesterday and Friday has been arrested for the moment.

There was no obvious catalyst for the big sell-off yesterday; it’s just the volatility that’s part and parcel of being in the late boom phase of the boom-bust cycle. (Once again, old financial pros will tell you a market top is not an event, it’s a process.)

Home Depot is rallying after delivering an earnings “beat.” Amazon is flat after the company confirmed it’s settled on the two locations for its much-touted second (and third) headquarters. What a joke… 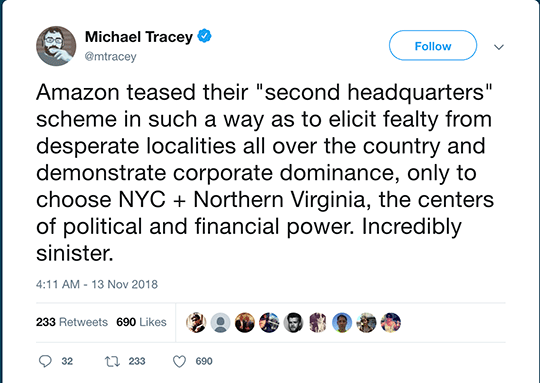 Flyover country does get a consolation prize — an “operations center” in Nashville.

Crude’s bounce above $60 didn’t last long. At last check, West Texas Intermediate has dipped below $58 for the first time since February.

“It bears repeating: Bear markets are born from recessions, and our economy is NOT anywhere close to a recession right now,” says one of our income contributors, Mike Burnick.

His evidence? Consumer confidence is high, which should translate to a strong holiday shopping season. Meanwhile, the job numbers remain solid and wage growth is finally showing signs of picking up. Not exactly “recessionary” behavior.

“That is why I expect the October sell-off was nothing more than a correction instead of the start of a bear market,” Mike tells us. “In fact, the double-digit sell-off we’ve seen is right in line with historical corrections.

“And on a month-by-month basis, the year-to-date S&P 500 returns have been quite volatile. Look at the first four months of 2018:

Again, volatility is a marker of the late boom phase.

And it’s not as if small-business owners are battening down for a recession, either.

At 107.4, the number came in below expectations. But a two-year streak of historic-high readings remains unbroken. And we’re talking a lot of history by now — the survey’s been conducted monthly for 45 years.

“The October optimism index further validates that when small businesses get tax relief and are freed from regulatory shackles, they thrive and the whole economy prospers,” says NFIB president Juanita Duggan.

Well, that and the fact that all of the Federal Reserve funny money created post-2008 is finally reaching its way to Main Street.

But as you’re well aware, the Fed is now “tightening” monetary policy. And 11 of the 12 post-WWII recessions have resulted from the Fed tightening too much or too fast.

Speaking of the Fed… and the next recession… we can safely predict it will be more than just the banks standing in line for a bailout.

Former Fed Chairman Ben Bernanke gave a speech a few days ago in New York. According to an account of the speech from Yahoo Finance, Bernanke asserted “that the Fed needs to have expanded powers to lend to institutions that are not commercial banks, which is the only industry that the central bank can offer emergency funds to as a ‘lender of last resort.’”

Right. Because Bernanke used that lender-of-last-resort authority so responsibly during the Panic of 2008.

That’s sarcasm, if you’re a newer reader. We described how Bernanke abused that authority in our 10th-anniversary retrospective on the collapse of Lehman Bros. in September.

Bernanke wants those emergency lending powers extended to “shadow banks” like broker-dealers and other nonbank institutions.

Of the Fed’s powers, Bernanke said, “I fear they are not fully adequate.”

While we’re at it… What’s with this goofy letter a couple of senators sent to the president about the Fed?

Sens. Chris Coons (D-Delaware) and Jeff Flake (R-Arizona) are urging the president to lay off his criticisms of the Fed.

“Your ill-advised commentary goes beyond holding the Fed accountable,” they tut-tutted. “You appear to be telling the Fed what to do with interest rates, which we believe is unconstructive and dangerous.”

Reality check: The Fed has no effing clue what to do with interest rates, and neither does Donald Trump. Only a free market can properly set interest rates — which, as several wise observers have pointed out, are the most important prices in the entire economy.

Rant over. Peace out.

P.S. Robert Kiyosaki has changed the lives of millions for the better across the last two decades, ever since the publication of Rich Dad Poor Dad.

But he’s taking his efforts to a whole new level tomorrow, when he invites you to join him for Agora Financial’s Weekly Cash Flow Summit.

In this event, you’ll learn about a whole new way to pull down weekly streams of income — at least three figures a week, and sometimes four or even five.

It’s tomorrow at 1:00 p.m. EST. With the deadline approaching, available spots are filling up fast. You can secure your spot right here.