How to Cash Flow Your Retirement

According to the National Association of Home Builders, rising home prices and mortgage interest rates are sidelining homebuyers, causing homebuilders’ sentiment to slide eight points from October to November. 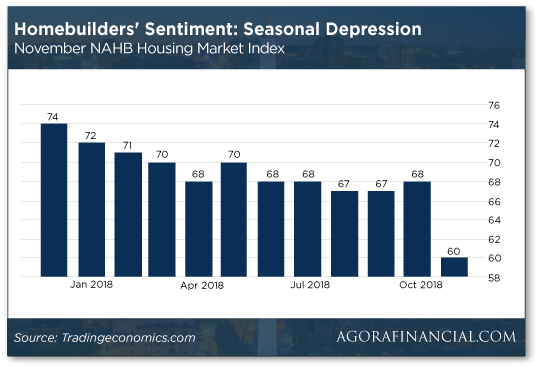 Perhaps the most stand-out NAHB number relates to buyer traffic; that dropped to 45 from 53 in October. Any number under 50 means more builders view conditions as poor rather than good.

“There is a definite shift,” says Lawrence Yun, chief economist of the National Association of Realtors at Forbes.

“I would characterize the current state as normalizing and not truly a buyer’s market,” Yun continues. “It was clearly a seller’s market in spring, but now things appear to be more balanced.”

In September, in fact, 465,000 new listings came on the market in 45 of the nation’s largest metro areas — “an 8% increase that marked the largest annual inventory growth spurt since 2013,” Forbes says.

“High-cost, overpriced markets and those coming off of significant inventory shortages should see conditions shift more quickly and feel more buyer-favorable than they have in recent years,” says Javier Vivas at Realtor.com

Meaning that most basic economic principle — supply and demand — cuts both ways; oversupply might be a rude awakening for sellers accustomed to bidding wars and double-digit gains.

The way Robert Kiyosaki sees it — “In the world of investing there are primarily two things people invest for: capital gains and cash flow.”

So which category does real estate fit into it? Robert, our latest Agora contributor, says it can be both…

“In order to realize capital gains, you must sell the asset. Plus, on those gains, you are going to have to pay taxes.”

Of course, the flip side is true, too. “You can also have a capital loss if you lose money on the sale of the asset.”

And you know what they say might happen when you assume…

Look no further than a decade ago, in December 2008, when home values across the country plunged a record 18% during the height of the mortgage crisis — after 11 years of escalating real estate prices.

Who’d a thunk? Certainly not the Fed… heh.

On the other hand: “Cash flow is an ongoing stream of income you receive from an investment,” Robert says.

“You may receive this money on a monthly, quarterly or annual basis, depending on the investment:

Here’s the best of both worlds: “Essentially, you own an asset, you keep it and you collect money off it at the same time,” Robert says.

“Those assets can also appreciate and end up giving you capital gains as well once you do sell.”

And that’s one of the life-changing secrets of Robert’s Rich Dad formula: Even if you don’t have millions of dollars set aside in savings, “you simply need to build up your monthly cash flow to be greater than your living expenses.

“For example,” he says “when my wife and I ‘retired’ in 1994, we did not have millions stashed aside. What we had was $10,000 in cash flow coming in every month from our investments, primarily real estate.”

That amount exceeded Robert’s monthly expenses — handsomely. “At that point, we were free,” he says. “The cash flow from our investments was more than paying for all of our living expenses.”

One more advantage of focusing on cash flow is that it eliminates the fear of running out of money… a fear that’s all too real for many retirees.

Even if you haven’t saved millions of dollars for retirement, Robert’s hosting a Retirement Masterclass showing how accumulating assets that provide predictable cash flow might be the way to financial security.

And this is by far the best way to get access to Robert’s unequaled financial education resources. Click here for the details.]

According to the Commerce Department: “Housing starts ticked up 1.5% to a seasonally adjusted annual rate of 1.228 million in October,” MarketWatch says. But that’s 2.9% lower than last year.

“Builders broke ground on more homes in October, but they applied for fewer permits to start work in the future, another reminder that housing market activity is still moving in fits and starts.”

Are you ready for some good news? Keep reading…

You’re probably aware markets are actually closed on Thanksgiving Day… unlike so many other retailers. And the market’s operating on a half-day schedule Friday, closing shop at 1 p.m.

“But here’s how you can use the short week to book a big gain,” Zach says. 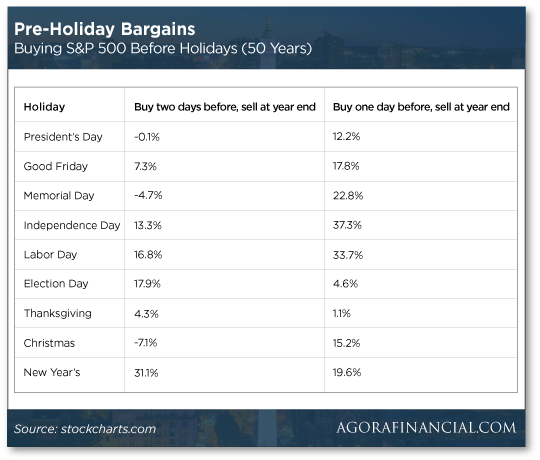 “Many investors are selling into Thanksgiving because they are worried of possible bad news,” says Zach. “But much of the bad news has already been priced into stocks.

“The beauty of this trading strategy is that it’s not just limited to Thanksgiving. You can use it for just about any holiday.

“This strategy offers an even bigger bang for your buck at New Year’s,” Zach says. “Buying two days before New Year’s Day nets you a 31.1% S&P gain on average when you sell at the end of the following year.”

“Trump and Obama have one major thing in common,” says our retirement and lifehack expert Nilus Mattive. “The stock market rose sharply in each of their first years in office.”

Year three with Trump remains to be seen…

Nilus says: “With (almost) 43 years of Republican leadership plus 48 years under Democrats in the spreadsheet, the most obvious — and controversial — way of viewing the presidential cycles is through party lines.”

Nilus emphasizes he’s not getting all political here — just looking at the data.

“On that count, the data are rather clear: Throwing out the Coolidge year, the stock market has averaged bigger gains under a Democrat-occupied White House.”

Don’t (want to) believe Nilus? “Even if we include Trump’s first year in office as well as the market’s performance so far in 2018,” he says, “the average S&P 500 gain under Republican presidents has been 3.62% versus 10.49% under Democrats.”

There is a silver lining, however: “Republican presidents have typically seen the lion’s share of market gains come in the third year of their given terms — an average gain of 10.57%.”

Nilus concludes: “Another historical reason to argue for a good market performance in 2019 under Trump.”

“This just in,” says our potstock authority Ray Blanco: “The federal government is in search of experienced pot growers for a lucrative business opportunity.

And that’s not all: The job posting says the government’s looking for growers with extensive accounts payable know-how… and a talent for rolling “marijuana cigarettes”? Bonus!

“This is no joke,” Ray says. “It’s not some elaborate entrapment plan cooked up by the suits in Washington, D.C.”

Although if Sessions were still — well, in session — we wouldn’t put it past him… heh.

“Instead, it really is a ‘sources sought’ notice posted on the federal government’s official business opportunities website.” (By the way, better get your résumé together if interested; the deadline for applying is Dec. 10.)

The job posting represents hope to marijuana advocates in the U.S. that the tide’s really turning in favor of federally legalized cannabis.

To Ray: “The real opportunity comes from the research breakthroughs that will come from making cannabis more readily accessible to scientists working on the next generation of cannabis-based pharmaceuticals.”

(Speaking of opportunity, even with the market sell-off today, pot stocks are one of the only sectors in the green… just thought we’d mention it.)

“We’re talking potential blockbuster drug revenues,” he continues. “So it’s reassuring to see the feds moving in the right direction when it comes to pot policy.

“We’re still not there yet — not by a long shot. But we’re definitely moving in the right direction,” Ray says. “And more near term, we’re taking advantage of trading opportunities around this incredibly exciting space as they come.”

More MoviePass Bedlam: “Our cash and cash equivalents may not be sufficient to fund our operations for the near future and we may not be able to obtain additional financing.” So said MoviePass’ parent company Helios & Matheson (HMNY) in the company’s 10-Q filing.

To which readers of The 5 — where we’ve been following MoviePass’ slooow sinkage — say, “No doy.”

According to Variety: “HMNY said it will try to continue funding operations by raising additional capital from sources such as sales of the company’s debt or equity securities, but added that there’s no assurance it will be successful.”

Hmm… If any “source” is willing to pony up some capital for MoviePass, we’ve got some Blockbuster shares to unload… heh. 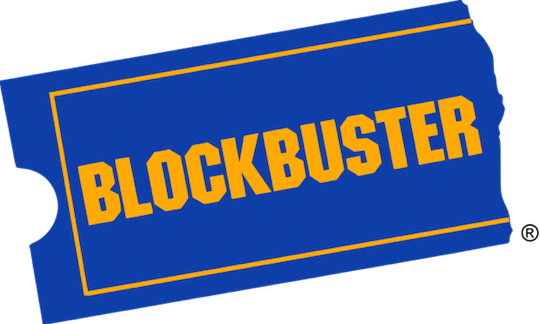 Is MoviePass the next Blockbuster?

But ever the eternal optimist, Helios CEO Ted Farnsworth says: “During this transitional period for Helios and MoviePass, we have been focused on reducing our burn rate and striving to improve our business model, and we are very encouraged by our Q3 financial results.”

So Q3 earnings gotta be fantastic, right? Not so much: Losses in the third quarter amounted to $137.2 million.

Not only is the company bleeding cash, it’s also bleeding subscribers — in more ways than one…

Because the movie-theater subscription service has changed the rules on customers so laughably often, the company said it experienced a “significant decline” in subscribers during the third quarter.

(Musta been a bad movie to walk out three-quarters of the way through… heh.)

To add insult to injury (hemorrhaging, in this case), two board members — Chris Kelly and Maria Stipp — decided they’re not going down with this particular Titanic.

Stipp: (rushing towards the door) I’ll join you, er, for a smoke… Yeah, that’s the ticket.

Board: But you don’t smoke. *sound of a door quietly closing*

Well, that’s how we imagine it…

At any rate — if you’re a subscriber — before MoviePass officially goes kaput, you might wanna squeeze in that 77% of a movie.

And 20 years after writing it, Robert is back with a brand-new Retirement Masterclass…
with little-known tricks of the rich that weren’t included in the book.

Click here now to see how you can learn some of the ways Robert retired at age 47 with massive wealth.