“So much for the safety and stability of bonds, right?” says an article at CNBC.

“Worse yet, neither one would’ve made it to ‘flat’ this year even if you include their full-year dividends from interest.”

The long and short of it: Bonds, a very traditional safe-haven play when the stock market goes haywire — think Panic of 2008 — have proven to be neither safe nor a haven in 2018.

Author of Rich Dad Poor Dad Robert Kiyosaki has this to say about conventional methods of diversification: “Most financial planners will tell you to invest in stocks, bonds, mutual funds, gold ETFs, REITs and mutual funds.

“But that’s not diversified. It’s filled with only one class of assets: paper assets.

“We should all know the markets will crash again — it’s essentially a life cycle — yet most investors invest without insuring their protection against that hit.”

That jibes with what we’ve been saying all year… something about the end of the boom stage in the boom-bust cycle?

So in order to crash-proof your portfolio, Robert recommends something outside the norm. (Hint: Of course, it involves his two favorite words.)

And Robert says when it comes to cash flow, it’s “not just how much money you make, but how you make it — where it comes from.”

He explains: “There are actually four distinct sources of cash flow. Each is quite different from the other, and each defines and determines a very different lifestyle, regardless of the amount of cash you earn. 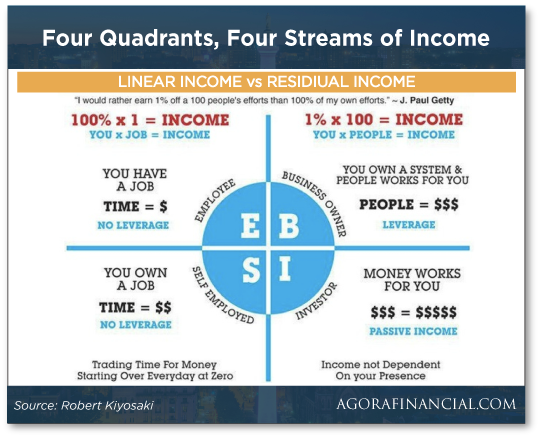 To flesh that out, Robert says, “The overwhelming majority of people learn, live, love and leave this life entirely within the E quadrant.”

So if you haven’t cracked the code yet, E is for Employee…

Simply put, you have a job and “the amount of active work equals income,” Robert says. In this equation, time is literally money.

“Our educational system and culture train us, from the cradle to the grave, in how to live in the world of the E quadrant,” he says.

S is for Self-employed

“Driven by the urge for more freedom and self-determination,” says Robert, “a lot of people migrate from the E quadrant to the S quadrant.”

This is where you own a job, Robert says, and “a huge range of earning power, all the way from the teenage freelance babysitter or landscaper just starting out in life to the highly paid private-practice lawyer, consultant or public speaker.”

But it’s not all it’s cracked up to be. According to Robert, “You don’t really own your business; your business owns you.”

B is for Business

“The B quadrant is where people go to create big businesses,” says Robert. “The difference between an S business and a B business is that you work for your S business, but your B business works for you.”

Another difference is rather than owning a job, you own a system where “income does not depend on active work.”

Robert says: “Those who live and work in the B quadrant make themselves recession-proof, because they control the source of their own income.”

I is for Investor

Here, instead of people working for you — as in the B quadrant — you put your money to work for you.

“This is not rocket science,” Robert says. “My rich dad taught me to live in the I quadrant by playing Monopoly.”

As to the four quadrants, Robert explains: “I’m not saying being an employee is a bad thing… I’m just saying it’s only one way of generating income, and one that is extremely limited.

“In times of uncertainty,” Robert says, “we look for other ways to generate income. When we know we can’t rely on employers, we begin to look to ourselves.

“We start thinking maybe it’s time to break out of our comfort zones and get creative to help make ends meet.”

In that case, Robert says it’s not just about changing jobs. “What you need to do is change quadrants.

“Breaking away from those typical job structures and creating your own stream of income puts you in the best position to weather an economic storm,” says Robert, “simply because you are no longer dependent on a boss or on the economy to determine your annual income.

“Now you determine it,” Robert says. “The B and I quadrants are where freedom resides.”

[Ed. note: So which quadrant do you want to live in? The choice is yours, really. But thinking about it isn’t enough. You have to take action, which many people unfortunately never do. Here’s one very powerful way to get started…

Robert Kiyosaki’s Retirement Masterclass will show you 49 secrets the rich use to collect anywhere from $1,168, $2,551 to even $4,377 in predictable weekly cash flow — something most people don’t even know about!

To the markets, where the Dow’s risen almost 300 points as tech shares start to perk up.

On to commodities: Oil’s price dropped dramatically Friday; it’s up today by $1.46, to $51.88, for a barrel of West Texas crude… still remarkably low.

According to CNBC: “GM plans to dramatically cut production at a number of plants in the U.S. and Canada next year and reduce its salaried workforce by 15% in a massive restructuring that will cost up to $3.8 billion.”

The UAW, however, is having none of it. “This callous decision by GM to reduce or cease operations in American plants, while opening or increasing production in Mexico and China plants for sales to American consumers, is, in its implementation, profoundly damaging to our American workforce,” says Terry Dittes, a UAW vice president.

“As a trader, I tend to focus on charts, not politics,” says our CBOE insider Alan Knuckman. “That being said, the post-midterm price action on health care is flashing green on my screen.

“Health care beat the broader market by more than double during the week following the midterm elections!”

“It’s true that Trump’s free ride may have ended when Democrats took the House earlier this month,” Alan continues. “But what really happened is the tourniquet that was holding back gains in health care was removed.”

“As you know, Republicans tried several times — unsuccessfully — to repeal Obamacare. And many GOP candidates ran on the promise of repeal in the midterms.

“But,” Alan says, “with the Democrats safely in control of the House, Obamacare is almost assuredly going to stay the law of the land.”

“But they have NOT been rewarded with the explosive price action they deserve… yet.”

Alan’s watching “smart money” stealthily moving into health care stocks; it won’t be long before retail investors catch on too.

“One company is standing tall above the rest, though,” Alan says. “And it’s worthy of your attention right now!”

We won’t be coy: “At the end of October, Bristol-Myers Squibb (BMY) beat earnings per share (EPS) estimates by a full $0.20.

“Beating EPS estimate by such a wide margin is no small feat,” says Alan.

“These stellar results left CEO Giovanni Caforio feeling quite optimistic about the rest of the year… “He raised full-year 2018 EPS guidance to the range of $3.80–3.90 per share, versus the consensus of $3.64.”

And if that doesn’t do it for you, take a look at this chart… 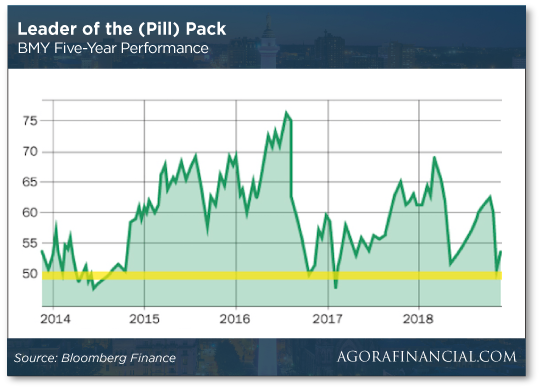 Alan continues: “BMY is heading into a seasonally strong fourth quarter with fundamental facts driving it higher. “And at 13 times expected earnings, shares are cheaply priced for a pop. “In short,” says Alan, “BMY has too many positive catalysts to count. And if you’re looking for a big bang for your buck, consider this healthy stock right now.”

This comes two years after voters said “yes” to legal pot in the Bay State.

“The state is starting with just two dispensaries authorized for recreational pot,” says Ray. “But it’s giving us a sneak peek at the immense demand for legal weed in jurisdictions mulling over recreational pot: Hundreds of cannabis shoppers waited in line for hours in nasty weather to make their purchases.

Kennedy was a hard-core anti-pot warrior… but he’s changing his tune — ahead of the 2020 presidential election, perhaps?

“Over the past year,” says Kennedy, “I’ve read, I’ve researched, I’ve had countless conversations with people on both sides [of pot legalization].

“One thing is clear to me: Our federal policy on marijuana is badly broken.

“Given the rapid pace of state-level legalization and liberalization,” Kennedy concludes, “I believe we must implement strong, clear and fair federal guidelines.”

Ray says: “That’s another vote in favor of federal legalization on Capitol Hill.

“And more are coming soon in the months ahead.”

“The wiring is being stolen because of the value of the copper, but in the long run the vandalism will cost city taxpayers thousands of dollars in repairs.”

Public Works Director Dave Mumford says, “They are prying open the electrical panel on the light poles, cutting the wires and then pulling the wires out of the panel. 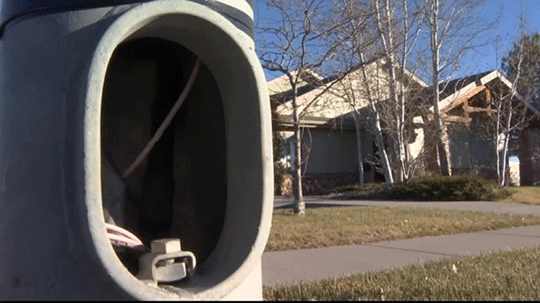 “In some cases,” Mumford continues, “we believe they may be attaching the wire cabling to the bumper of a car or truck and just driving away.”

Well, that’s one way to do it…

The 5’s covered copper thefts for years but they’re uncommon now with copper prices down 12% from their summertime highs… and WAY down from their 2011 peak. 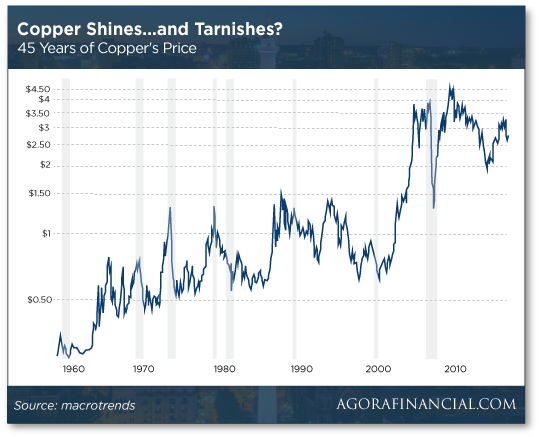 Then again, maybe the thieves have…

“Officials have checked with local recycling centers to see if anyone has turned in copper wire for cash,” says KPAX, “but so far there are no leads in the case.”

Maybe they decided it wasn’t worth the trouble?

P.S. Even if you haven’t saved millions of dollars for retirement, Robert’s hosting a Retirement Masterclass showing how predictable cash flow — to the tune of $1,168, $2,551 and even $4,377 weekly — might be the way to financial security.

One advantage of focusing on cash flow — it eliminates the fear of running out of money… a fear that’s all too real for many retirees.