The comeback rally didn’t have any staying power. 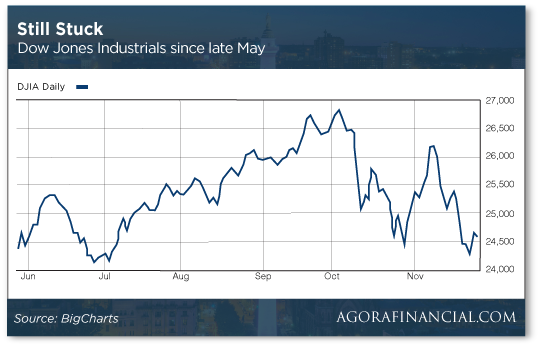 That’s hardly a catastrophic state of affairs, but you don’t have to look far to find gloomy headlines. To wit…

Throughout much of 2018, a consensus has been building among financial pros.

On the one hand, this consensus jibes with what we’ve been saying in The 5 all year: The markets and the economy are in the late boom phase of the boom-bust cycle.

On the other hand, the consensus is reaching the glib conclusion that the United States is headed for a recession and a bear market by 2020 or even late 2019. Around here, we’re not so sure.

Throughout much of 2017, we were noticing disturbances in the market that the pros are only now latching onto.

Last year, the stock market kept climbing in escalator fashion. Outside of a less-than-3% pullback in August, the amount of market calm was positively eerie.

And yet… At the time, we were telling you how a mere handful of stocks were propping up the broad averages like the S&P 500. That’s classic late-cycle behavior.

By 2017, the stock market’s “Big 5” companies as measured by market cap — Apple, Alphabet (Google), Microsoft, Amazon and Facebook — had taken over everything.

According to Williams Market Analytics, between mid-2013 and mid-2017, those five companies registered average annual gains of 57%… while the other 495 companies in the S&P 500 grew on average barely 6% a year.

That’s five companies doing a lot of heavy lifting for the rest of the market.

To no small extent, that phenomenon was fueled by something that in September 2017 we labeled “the attack of the passive robots.”

Growing numbers of retail investors, fed up with the underperformance of human advisers, were turning more and more to “robo-advisers.”

The big brokerages like Vanguard and Fidelity were offering computerized programs to help people come up with an asset-allocation model. Most of the models looked the same, investing clients’ funds the same way.

At the same time, growing numbers of hedge funds were also piling into “algorithmic” computer-driven trading strategies. The pioneers delivered major outperformance. But over time, when everyone starts doing the same thing, investing in the same strategies, no one has an edge anymore.

Meanwhile, investors who didn’t turn to computers turned instead to “passive investing.” Here too, investors were rejecting underperforming human advisers — opting for mutual funds and ETFs that “passively” track an index, like the S&P 500.

The problem is that both robo-advisers and passive investing create self-reinforcing distortions — like five giant stocks whose performance crushes the rest of the market.

If you keep doing that every two weeks… and if millions of others like you do the same thing… you see how the biggest companies just keep getting bigger, regardless of their profitability.

But when the stock market starts turning south, the process feeds on itself in reverse. Selling begets more selling.

And that’s exactly what we’ve been experiencing throughout the volatile year of 2018. What does it mean going forward?

Our experts here at Agora Financial don’t agree how big a threat is posed by robo-advisers and passive investing. We won’t take sides today, but we’ll point out that at the peak of the dot-com bubble, more and more money was piling into fewer and fewer stocks — just like now.

By late 1999, three of the era’s darling “new economy” stocks — Microsoft, Cisco and Intel — were among the six biggest as measured by market cap. They were right up there with old-economy General Electric, Exxon Mobil and Walmart.

Robo-advisers were unheard of, and ETFs were only starting to come into their own. But neither was necessary to create a mania that — as the Forbes writer said above — turned on a dime from “Buy everything” to “Sell everything.”

And yet… We find this consensus of a late-2019 or 2020 recession and bear market just a little too facile.

Too many people believe it. It’s too commonplace.

The shock event could be almost anything… although there’s one possibility on our radar that merits closer attention. More about that tomorrow…

Crude is firming for a second day, bouncing off blatantly “oversold” conditions. A barrel of West Texas Intermediate is knocking on the door of $52.

WTI took a crazy-steep dive last Friday of nearly $4. From the early October peak above $76, crude has positively cratered… 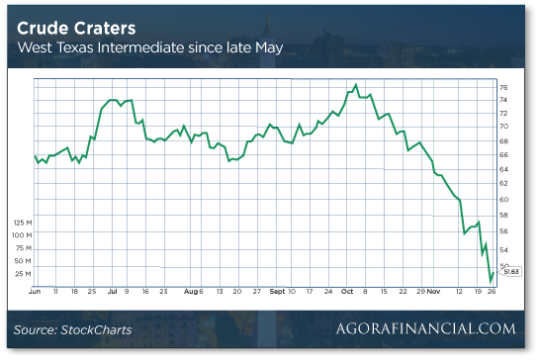 Hmmm… This is the second time in five years that a major one-day drop in oil prices has taken place over Thanksgiving weekend — when U.S. traders are away from their screens and trading volume is thin but the rest of the world carries on with business as usual. (The other time was a shock decision by OPEC to keep the spigots wide open on Thanksgiving Day 2014.)

Outside of a general market panic like 2008, we’re hard-pressed to think of a circumstance where an asset collapses in value by one-third in less than two months.

Then again, at the risk of repeating ourselves, crude has been a thoroughly manipulated market since the time that modern-day oil futures began trading in 1983.

We’ve recounted the story before, informed by the oil-industry journalist Jim Norman’s 2008 book The Oil Card. In short, Washington worked closely with Saudi Arabia in the 1980s to drive down oil prices — depriving the Soviet Union of oil-export revenue and ultimately bankrupting the Evil Empire. Then for the first decade or so of the 21st century, Washington’s objective shifted: Oil prices were deliberately elevated to act as a brake on Chinese economic growth.

Then in 2014, Washington engineered “regime change” on Russia’s doorstep in Ukraine and Russia responded by annexing the Crimean Peninsula (a hot spot once again in the news this week). Western sanctions were imposed on Russia… and within months, oil began dropping from over $110 a barrel to a bottom of $26 by February 2016.

As we said earlier this year, we’re flying blind applying Jim Norman’s thesis to present-day events. We’ve interviewed him before, but now he’s gone into retirement and he’s hard to get hold of.

But here’s our best guess: Over the next several years, oil prices will swing wildly depending on which Great Power is the bigger target of Washington’s pique — China or Russia.

The target will shift at unpredictable moments, because Washington is keen to take on both Beijing and Moscow.

Earlier this month, one of those “bipartisan blue-ribbon panels” that infest the nation’s capital issued a report declaring that U.S. national security is at greater risk “than at any time in decades” — mostly because China and Russia “are seeking regional hegemony and the means to project power globally.”

That dovetails with a Pentagon report earlier this year summed up by Defense Secretary James Mattis: “Great-power competition — not terrorism — is now the primary focus of U.S. national security.” (Translation: “We’re tired of this rinky-dink guerrilla-warfare stuff: The real money for our contractor friends is in ‘Big Iron’ ships and aircraft.”)

Earlier this year, it looked as if Washington’s objective had pivoted back to high oil prices to squeeze China. Now it’s possible the pivot is returning to Russia.

We know this much: Washington can’t have it both ways.

As Jim Norman wrote in The Oil Card, “Nation-states behave with logics, moralities and imperatives all their own. Who can know them? When these elephants rage, we pygmies are trampled. It pays to know when to get out of the way.”

“I couldn’t believe my eyes when you said you were buying postage stamps in order to post cheques (checks in U.S. English),” writes a reader in Ireland.

“Obvious advantages of online banking are no lost or delayed payments, can be carried out from the comfort of your home or office, instant verification by sender and receiver, so no need for receipts. Big Brother already has access to your bank account, so there is no disadvantage that I can see. I do hope your stamps ‘investment’ pays off.”

The 5: Don’t get me wrong. I’m sure my wife and I write fewer checks now than we did, say, 10 years ago — certainly relative to the volume of transactions we perform.

But there are times when we opt for checks for any number of reasons. Perhaps we want to spare a local business the 2% merchant fee paid to Visa or Mastercard. If we do business with a contractor whose office is 15 miles away and they mail us a bill, it’s just easiest to send a check back. (The stamps come in handy!) And when the neighbor kid comes by selling stuff from a catalog to raise money for her school band… well, she doesn’t have a Square reader to take payments.

Not yet anyway. She’ll probably get there soon enough if homeless guys in Detroit have been taking card payments for nearly three years now…

P.S. We got a whale of a response yesterday after sending out a note from Jim Rickards.

It’s all about a secret he kept for 15 years. He hopes you’re not offended that he withheld this information from you… but you’ll see here that he had his reasons.

“I hope you understand,” he said.

This sensitive message is still available to view through midnight tonight. Click here to watch now.