The Real Reason the “FAANG” Stocks Broke Down

“My conversation with Dave Gonigam caught me a bit off guard,” says our income maven Zach Scheidt.

Heh… I was caught a bit off guard seeing Zach recount our conversation in our sister e-letter, The Daily Edge.

But yes, there we were after hours in the break room of Agora Financial headquarters in Baltimore earlier this month, after a day of meetings capped by a happy-hour delivery of Greek food to our rear parking lot. (The lamb was excellent.)

It was a good conversation, and it’s worth bringing you in on it today…

“Zach, I like reading your work,” I said. “But I wish you weren’t so darn bullish all the time!”

Here’s how Zach recalls what followed: “And so began a lively discussion about where we are in the market cycle, what investors can expect in the months ahead and how best to protect one’s wealth.”

You probably know where I stand because I’ve been saying all year we’re in the late boom phase of the boom-bust cycle.

Which is not to say it’s time to head into a bunker. A more apt analogy, albeit an awkward one, came from the hedge fund manager Ray Dalio last year: “Keep dancing but closer to the exit and with a sharp eye on the tea leaves.”

Anyway, I didn’t change Zach’s mind — he remains “darn bullish” — and that wasn’t my intention. I just like picking the brain of really smart people, whether I agree with them or not — which is why my job at Agora Financial is the best job I could ever ask for.

But here’s the reason we’re recounting the conversation. As Zach wrote his readers last week…

“My conversation with Dave helped me see that I need to change my tone when it comes to the market’s direction and the volatility we’re currently experiencing.

“I need to do a better job explaining what it means to be bullish on our economy, while still protecting the wealth you’ve worked so hard to accumulate.”

So we’ll give Zach a platform for just that.

“I believe our economy is continuing to grow,” he says. “I believe that opportunities abound for investors who know where to look for them. And I believe that America has the intestinal fortitude to do what needs to be done to ensure that our citizens are treated fairly (on both a social and economic level).”

So what about the fact the stock market has basically gone nowhere since the first of the year, but with much volatility?

“Everyone knows you’re not supposed to put all of your eggs in one basket,” Zach says, getting back to first principles.

But that’s exactly what institutional investors have been doing for several years now — going all-in on the tech sector.

To some degree, they had no choice. If they had any hope of “beating the market,” they had to go into tech, and especially into the FAANG stocks — Facebook, Apple, Amazon, Netflix and Google.

It worked great… until this year. Look at the FAANG companies compared with the S&P 500 overall… 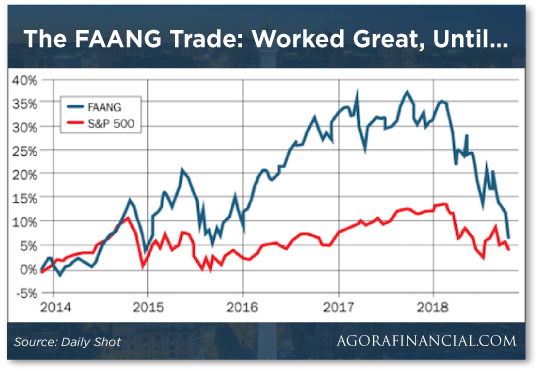 What went wrong? “Well, there are a lot of catalysts that we can point to,” Zach allows. “The trade war, rising interest rates, the ‘economic cycle’ and more.

“But what’s really in play right now is that these stocks got way too expensive. Investors were so eager to buy the most popular stocks that they didn’t care what price they had to pay to own the shares.

“All of this energy was great as long as investors kept buying. But when the trade war fears, interest rate hikes and other catalysts came into play, investors finally took a step back and started thinking about how much they were paying for these stocks.”

Yup. Four months ago, Amazon sported a price-earnings ratio of 232. Even today, with shares down 20% from the September peak, the P/E is still in nosebleed territory at 91.

[For the record: Zach sees Apple standing apart from the rest of the FAANG group. He’s still keen on AAPL as it transitions from a go-go growth company into a mature, steady dividend payer. The P/E is a not-outrageous 15. But aside from Apple, he’s steered clear of the bunch.]

“The good news is that beyond the carnage this group of stocks has caused in the market, the rest of our economy is still very strong,” says Zach. “Which brings me back to my ‘so darn bullish’ perspective.

None of those things changes this fact: You take huge risks putting all your eggs into a single basket — whether it’s tech or anything else.

“It’s important to take a balanced approach to investing,” Zach sums up.

“That means allocating some of your wealth to precious metals (which are doing quite well right now). It means investing in bonds (which give you guaranteed payments regardless of what the market is doing). And it means owning different types of stocks (some that will hold up well, even when the market is pulling back).”

[Ed. note: Next week, Zach is taking the wraps off a breakthrough market strategy. It’s designed to work no matter what the market environment is — bullish, bearish or something in between. We’ll have more to say about it in the coming days…]

To the markets, which are rallying hard on the heels of a speech by Federal Reserve chairman Jerome Powell.

Powell said interest rates are “just below” the so-called neutral rate — that is, a rate consistent with full employment, steady economic growth and stable prices.

Here’s how traders are translating that: “We might be nearly done with raising the fed funds rate every three months like clockwork.”

Heh… The funny thing is a few weeks ago, New York Fed president John Williams — his position is always an important one in the Fed power structure — said the neutral rate is no longer a big deal in the Fed’s decision-making and that it’s “gotten too much attention in commentary about Fed policy.”

Then again, Powell might simply be trying to shut up the president — who carped again yesterday about how he’s “not even a little bit happy” with rising rates.

The economic recovery in rural America — which was late to the party compared with the rest of the country — might already be over.

Research from the Federal Reserve Bank of Minneapolis finds 84 farm operations in the upper Midwest filing for Chapter 12 bankruptcy between June 2017–June 2018.

That’s double the figure of four years ago. Indeed, it surpasses the 2010 peak. Well over half of the bankruptcies, 50, were in dairy-intensive Wisconsin.

Look for those numbers to grow, thanks to the trade war: Last month the National Milk Producers Federation said retaliation tariffs by China, Canada and Mexico have cost U.S. dairy farmers over $1 billion since May.

Every month, Creighton University economist Ernie Goss surveys bankers in rural sections of 10 states stretching from Illinois west to Wyoming. From there he compiles his Rural Mainstreet Index.

Like several other economic numbers, this one has a dividing line of 50. More than 50 indicates a growing rural economy, less than 50 means contraction. The latest number has sunk like a stone — from 54.3 in October to 49.9 this month.

It’s the first sub-50 number since January. This year marked the first sustained stretch of over-50 numbers since 2014… and it might be done now.

A typical survey response was this one from Jeffrey Gerhart, CEO of the Bank of Newman Grove — about two hours west of Omaha, Nebraska. He calls the tariffs “bad policy from the White House.”

The housing market has peaked… and listing agents are resorting to desperate — and risqué! — measures.

Case in point — a 2-year-old home in an outer-ring suburb of Houston called Conroe. It’s listed by one Kristin Gyldenege, whose Instagram account goes under the name “pottymouthedagent”

To help move the house, she hired a couple of tattooed fitness models and had them pose seminude in the kitchen and laundry room.

The objective, as explained by the Houston Chronicle— “to show a more realistic scenario of a young couple walking around partially clothed… performing normal household tasks like changing a lightbulb or cooking.” 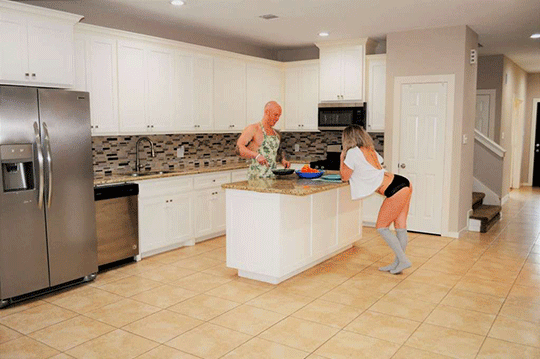 Why yes, this is totally realistic. Doesn’t every man wear a chef’s apron over his bare chest?

One of the MLS websites ended up taking the photos down after getting more than 100 complaints. On the other hand, the listing got 20,000 views and garnered six showings within 24 hours.

Today’s mailbag gets off to a rousing start: “Dave, you are exactly right about robo-advisers and passive investing both creating self-reinforcing distortions.

“They have combined with debt-fueled share buybacks to prop up the market averages and inflate a freakish bubble.

“The late boom phase of this cycle has indeed been escalator-like — which might be why that eerie sense of market calm in 2017 you mentioned felt so unnatural. Unfortunately, the coming bust could be more like an elevator ride back down.

“As always, thanks for being ahead of the curve! The insights offered here in The 5 are terrific.”

On the topic of Julian Assange and a free press, we heard from one of our regulars…

“I’ll agree with the person who wrote, ‘Julian Assange does not have “immunity” (to hide behind our witless Constitution) to commit high treason by working in league with our arch enemies (Russia), to expose our sensitive information, especially to use it against us, to attack an American politician. Forget arrest, a CIA hit should be sanctioned for him. He is the worst terrorist alive, akin to Osama bin Laden.’

“I would support a public gutting of Assange like a fish if the same punishment applied to the elite who exposed far more top-secret information by blatantly violating too many laws to include in this email, including keeping those secrets on her private server.

“Instead, this fool makes no connection and remains quiet as a mouse fart on the far greater crimes (in number and magnitude) of Hillary!”

The 5: We hope you’re being facetious.

The whole problem with Mrs. Clinton’s offenses — and a major subconscious motive many voters surely had when they rejected her in 2016 — is the culture of impunity, the in-your-face confirmation that powerful people were/are above the law.

But Julian Assange has no power… and as we said in the first place, his prosecution poses a grave danger to the First Amendment.

Offering him up as a sacrifice to see justice done to the Clintons? No way is that a trade-off we’d be willing to make…

But we do mean a limited time. Because of popular demand, it’s available to watch only through midnight tonight. Click here for immediate access.