Death and Taxes (and Health Care)

“Health care has its sights set on the future, and that future appears to be bright,” says an article at Healthcare Finance, “at least jobswise.”

There it is… at least jobswise.

“Overall,” the article continues, “the health care sector is on track to generate more than 1.1 million new jobs by 2026, topping the list of rapidly expanding industries.”

Good news if you have a job in health care or are thinking about a career change. But not so much if you need, well, actual health care…

“The American health care system is in trouble,” says Agora’s income specialist Zach Scheidt. “You know it, I know it and so do the folks in Washington.”

Which aligns with a recent Pew Research poll that found it was the No. 1 most important issue for voters in the midterm elections.

“Well, now the election results are in. The people have spoken,” says Zach. “And things are likely to get much worse before they get better.”

Now that Democrats control the House and Republicans control the Senate, Zach foresees gridlock at every level — particularly when it comes to reforming health care.

“Both sides will advance unrealistic and irreconcilable bills that won’t make it out of the Capitol,” he says. “At best, that means there will be no new health care legislation.”

As for the worst: “We’ll see some kind of Frankenstein compromise make its way through Congress. The toothless, watered-down bill won’t do anything except let politicians pretend they did something. [Emphasis ours.]

“From there, either President Trump will recognize the legislation as the farce it is and refuse to sign it… or he’ll look to take credit for ‘fixing’ health care by signing it and then blaming Congress later.”

“And lest you think I’m being too political,” Zach says, “even having a single party in charge wouldn’t make things better.”

“Let’s not forget that the Democrats’ Affordable Care Act created many of the problems we’re seeing today,” he says. “And Republicans held Washington for two years and couldn’t agree on how to fix the system.

“The fact is at no point in Washington, D.C.’s, involvement in health care has any politician considered solutions that help everyday people more than private interests. (And I include the ‘Medicare for all’ crowd in that group.)”

“The bottom line is that health care spending needs to be a part of your financial planning for the future,” Zach says.

“So you need to expect to spend much, much more than you currently do on your health,” says Zach.

“For retirees,” Zach says, “figuring out how to cover medical costs can be so stressful that it could literally cause even more health problems.”

“Fidelity has been estimating medical costs for seniors every year for the past 16 years,” says Zach. “As you can see in the… chart, that number has gone up every year since 2014. 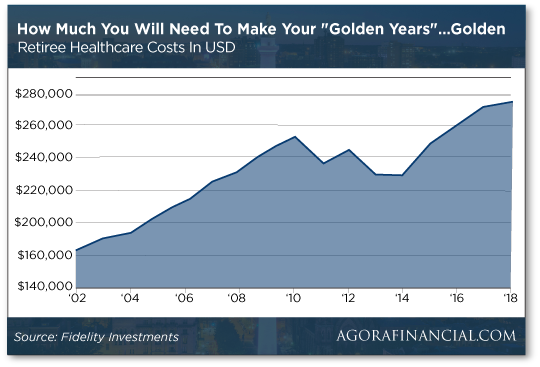 “Unless something changes — and there’s no indication anything will — anyone who retires in 2019 or beyond will pay even more!”

“Another reason to worry about that number is that it’s based on current life expectancies,” Zach says, “which have slowly risen over time.

“Those extra years are great, but you have to be prepared for the fact that they might also be very expensive,” says Zach, “especially as your health deteriorates.”

“So no matter what you are currently planning to have saved for retirement,” says Zach, “it would be prudent to plan for even more.

“An easy way to do that is to create as many diverse streams of income as you can.”

To that end, Zach will soon share a way to lock in a big income stream — designed to take some of the sting out of rising medical bills. Stay tuned next week…

And for that, Mike looks no further than bargain hunter extraordinaire Warren Buffett.

“So what has Buffett been buying lately?” he asks.

Buffett (via Berkshire Hathaway) is going long on…

“These recent moves give Buffett large stakes in three of the top four American banks by assets including his long-standing position as the top shareholder in Wells Fargo,” Mike says. As well as long-standing stakes in M&T Bank, American Express and Visa.

“It’s easy to see why the Oracle of Omaha is attracted to big bank stocks,” Mike says. “The S&P 500 Financials Sector is trading at 11.7 times next year’s projected earnings.”

Not to mention: “Financial stocks had the second-best profit growth rate in the third quarter, trailing only Energy.” 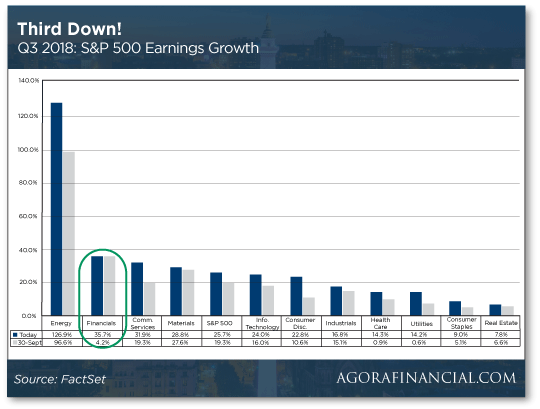 “It’s the cheapest sector, by far, in the entire stock market. The S&P 500 by contrast is priced at nearly 16 times 2019 profit estimates.”

“Meanwhile,” says Mike, “The S&P Financial Sector profits are on track to grow 25.4% this year, well ahead of the S&P’s overall earnings growth rate of 20.5%.

“Big bank stocks should offer some of the best buying opportunities once the dust settles.”

[Ed. note: Mike Burnick asks, “Are you ready to retire a millionaire?”

Here’s all you need to get started:

Have those three things? Game on!

“Your life is about to change in ways you never thought possible,” says Mike.

“I know how crazy this may sound, but I’ll show you documented proof.”

But you must position yourself for a millionaire’s retirement before MIDNIGHT TONIGHT. Here’s how.]

To the markets, where the Dow’s down about 70 points after yesterday’s 500-point surge.

Shares of Deutsche Bank are down 5% after German police raided DB’s Frankfurt headquarters. We read 170 police officers and tax investigators are looking into the bank’s involvement in a money laundering scheme, detailed in the financial documents leaked in 2016 known as the Panama Papers.

Focus instead on this chart, fresh this morning from the Commerce Department… 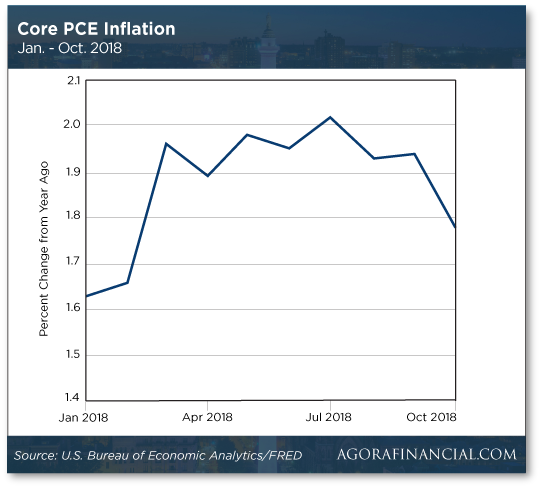 That’s “core PCE,” the Fed’s favorite measure of inflation. When the Fed talks about its 2% inflation target, this is the number it has in mind. As you can see, it’s now retreated to 1.8%.

Meaning? More space for the Fed to keep raising rates, regardless of Powell’s mumbo-jumbo about “neutral” interest rates yesterday…

“The environment remains excellent for biotech and pharma on a fundamental level,” says Ray Blanco on the FDA-approval beat.

“According to my records,” he says, “the regulator has nine more drugs up for decision between now and the end of the year. Potentially, we could see the approval of 60 drugs.

Ray explains the FDA’s approving an unprecedented number of generic drugs in order to align with Trump’s promise to lower drug prices — something the head of the FDA, Scott Gottlieb, is happy to comply with.

“This is good for small biotechs,” Ray says, because “it forces big established pharma and biotech companies to look to their smaller siblings as a way to bolster pipelines… to compensate for revenue losses elsewhere.

“And while things are rough right now,” Ray says, “it puts us in a great place for big gains in the future, particularly from today’s depressed prices.”

In what’s being seen as a media stunt — or not? — Switzerland-based hotel chain Ibis is offering guests “social media sitters” or, as website Beebom prefers, “Instagram butlers.” 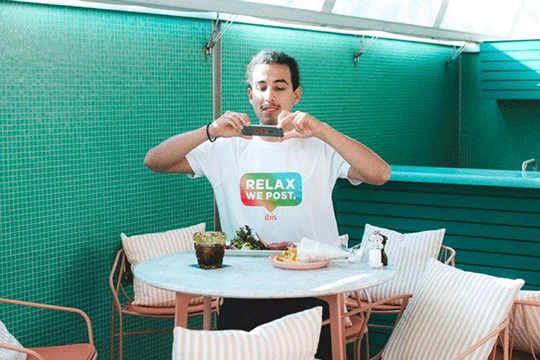 Guests can even choose from “social media sitters with expertise in fields ranging from travel, lifestyle, fashion, architecture, beauty and nature among others.

“So how much does hiring a sitter cost you?” says Beebom.

“Well, it starts at $90 per day and goes up depending on your specifications and the expertise of their Instagram sitter.”

What might deter weary vacationers from hiring a “sitter,” however, is “all your friends might find out that these are not your photos, as the sitters need to include the hashtag #postedbysocialmediasitter in the caption.”

So we enclosed your three-step retirement plan right here. Read it for free.

Hurry, though — you’ll want to see it BEFORE tonight, Nov. 29, at midnight.