The Lucrative Trades We Couldn’t Tell You About (Until Now)

Well, our own Zach Scheidt told us 2018 would be “the year of the takeover deal.”

The first half of the year brought merger-and-acquisition activity totaling $2.5 trillion worldwide. By the end of the third quarter, that total reached $3.3 trillion.

The deals since then have continued coming at a record clip — with two big ones announced only yesterday.

The pharma giant GlaxoSmithKline is acquiring a biotech called Tesaro for $5.1 billion. Big Pharma always needs smaller biotechs to keep the product pipeline full. Tesaro has a drug already approved for ovarian cancer… and it might prove useful for lung, breast and prostate cancer.

At one point yesterday, shares of Tesaro (TSRO) were up a staggering 56%.

It’s probably bad news for the rank and file at Tribune Media (TRCO). As a former broadcast insider I can tell you Nexstar is widely known among its employees as “Deathstar.” Heh…

Now for a confession: For months, we’ve been sitting on a system that sniffs out deals like these only days before they go down.

In the case of the two takeovers announced yesterday…

We’re sorry we couldn’t recommend these trades in any of our high-end services. But we were still in the process of testing this system. We wanted to make sure it was as big a deal as we thought it would be.

Frankly, we wanted to make sure it would live up to the billing we mentioned yesterday about possibly the biggest announcement in Agora Financial’s 14-year history.

But today, we can tell you with confidence… we’re there.

“What I found blew me away,” says the aforementioned Zach Scheidt — recalling the moment he discovered the potential for lucrative trades flagged by this system.

We can’t reveal too much about the system — for one thing, we struck a confidential business partnership to give our readers access to it — but we can tell you how Zach became convinced of this system’s promise.

“The first thing I did,” he says, “was look at 42 of the most significant buyouts over the past two years. To my astonishment, the system had flagged 40 of them before the news was made public.

“In fact, the data showed a distinct ‘Buyout Zone’ — a period of unusual activity right before an acquisition announcement. Even more impressive were the gains you could have made by taking advantage of this Buyout Zone.

“Simply buying a stock when it entered the Buyout Zone would have delivered average gains of 35%. On average, the system triggered nine days before the stock jumped.

“If you had bought the right options on the stock, your results would have been exponentially better. I’m talking about a chance to make average gains of 4,866%… again in about nine days!”

Among the deals the system detected in advance…

And that’s just holding common shares of the takeover target’s stock. Buy call options on those stocks and the gains multiply many times over.

Really, playing the Buyout Zone is the closest a retail investor can come to collecting a Wall Street-style bonus.

Zach knows how lucrative those bonuses can be from his hedge fund days. When he first entered that lofty world at age 23, his base salary didn’t amount to much.

But it didn’t have to. “It was my potential to make a bonus,” he recalls. “Essentially, I would get to keep a small percentage of the firm’s profit — which, as I would soon find out, could wind up being many times the value of my base salary.”

Granted, the bonuses you can collect from the Buyout Zone aren’t as lucrative as the $2.75 million that some of Wall Street’s heaviest hitters collect.

But the average Buyout Zone trade has the potential to turn every $500 invested into $24,829.

Moments ago, we took the wraps off this system here at Agora Financial. Click here and Zach will show you how to seize on these Buyout Zone trades… potentially collecting your own juicy “bonus” only days from now.

The relief rally after a truce was declared in the U.S.-China trade war? It sure didn’t last long.

A 450-point surge in the Dow yesterday was pared to only 170 points by day’s end… and today the bottom is falling out, the Big Board down nearly 600 points as we write. That’s nowhere near the lows of the day after Thanksgiving, but it’s not exactly confidence-building.

That’s probably because yesterday, the yield on a 3-year Treasury note exceeded the yield on a 5-year note. That’s not how it usually works; under normal circumstances, you collect a higher yield in exchange for lending Uncle Sam your money for a longer stretch of time. But when the “yield curve” flips the other way, that can be a sign of an economic slowdown.

With stocks selling off, hot money is piling into longer-term Treasuries for safety — driving yields down. The yield on a 10-year note is down to 2.9%, a three-month low. Hot money is also piling into gold, the bid now surpassing $1,240 for the first time since July.

Bitcoin has slipped below $4,000 today… but James Altucher is still keeping the crypto faith.

James recalls a recent conversation with a friend who asked him if he’s still bullish on cryptocurrency. “I didn’t even hesitate. ‘More than ever,’ I told him.”

Bitcoin spent much of the autumn trading in the $6,000s. Then the bottom started falling out three weeks ago.

James has talked with many crypto investors in recent days. “Based on my discussions, the price volatility has been driven in part by end-of-year tax selling, continued concerns about regulatory oversight and value investors jumping in to buy low-priced cryptos.”

But on the positive side of the ledger, James sees these items among others…

So James is hanging tough: “Given the massive market opportunity for cryptocurrency adoption, I continue to remain bullish on major cryptocurrencies such as bitcoin and ethereum, and advise my readers to buy dips.”

Hmmm… Samsung appears to be sending smartphone customers to Apple. And it’s not a case of holiday goodwill, like, you know, the Santa at Macy’s sending you to Gimbels.

Whoever runs Samsung Mobile’s promotional Twitter account in Nigeria has been caught out posting via an iPhone. YouTuber Marques Brownlee was first to spot the faux pas… 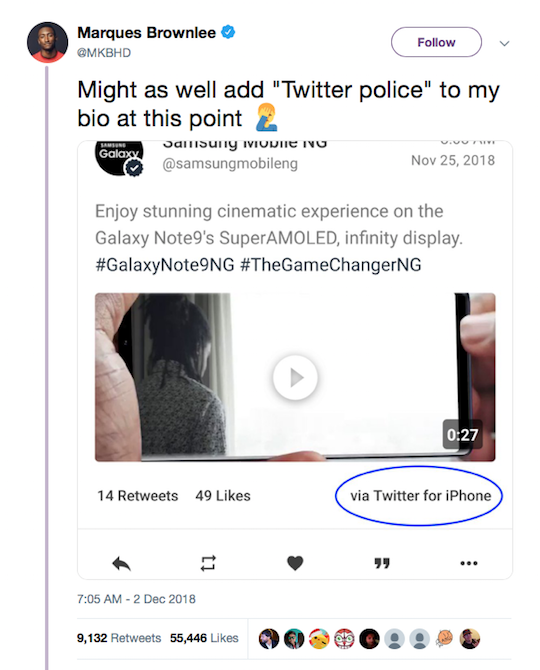 The account has since been deleted and reinstated, minus the embarrassing tweets.

Nor is this the first time an iPhone has been used to promote Android products. In September, Brownlee noticed a Bollywood actress tweeting on her iPhone to extoll the praises of a Google Pixel 2.

Back to the topic of Julian Assange in the mailbag: “I would like to make a point about a reader’s suggestion that someone or an abstract entity can own classified information.

“Classified information is not ‘ours’ or ‘mine’ or ‘Joe’s,’ etc. That is, it doesn’t ‘belong’ to someone (as in ‘it’s mine,’ an actual person) or something (as in ‘it’s ours,’ an abstract entity as used by the regular). There is no meaningful way to assign ownership to ‘us’ only to specific individuals.

“For example, if ‘we’ own it, who specifically can sell or destroy it? People with the clearances and with a need to know have access to particular classified information, but they don’t own it in any meaningful sense. The person or persons who originally classify information determine who can have access to it by setting its classification level and what constitutes a need to know.

“Also, there is a difference between military secrets and political secrets. Political information can be classified for reasons other than defense. People often mistakenly think that because something is classified, it is a military secret and that its exposure would compromise defense. Revealing political secrets can compromise very different things.

The 5: By and large, the Obama- and Trump-era prosecutions under the Espionage Act have targeted whistleblowers who spilled secrets that were merely embarrassing to the federal government.

They did not compromise “sources and methods,” to use the trendy term in intel circles.

In one of the most recent cases, a group of First Amendment scholars filed a friend-of-the-court brief spotlighting the problem of overclassification. It’s summarized as follows by Alice Speri of The Intercept…

“The group wrote that between 2–3 million U.S. officials have the authority to classify information, and that last year they made more than 49.5 million classification decisions — a 10% increase over 2016. Reviews of classification practices have regularly concluded that the procedure is widely abused, that classifying information is too easy and that there is no consequence for misclassification.

“A former director of the Information Security Oversight Office cited in the scholars’ brief reported that information ‘published in third-grade textbooks’ is classified.”

The bigger a bureaucracy grows, the more secrets it feels it has to protect, no?

After all, many companies are still sitting on piles of cash as a result of the corporate tax cut. Investors get itchy when companies don’t put that cash to work.

Now, for the first time, there’s a system that spots buyout activity in advance of the news going public — giving you the chance to acquire shares of a takeover target just days before they leap higher.

How much could information like that be worth to you? Answers at this link.