“Shame on you, Sheryl. I believed in you, I leaned in. You are a fraud. You were supposed to be the adult supervision, but you are just another corrupt, corporate shill.”

Only a year ago, Sandberg was still a  rock-star executive, feminist icon, best-selling author, the object of 2020 presidential speculation…

… until the halo got knocked off this year.

As FB was rocked by scandal after scandal, Sandberg was frequently caught wrong-footed — keeping a stony silence for days, then finally issuing butt-covering statements written by a roomful of lawyers. “Just another corrupt, corporate shill,” indeed.

The scandals climaxed two weeks ago with the revelation Sandberg personally asked company staff to look into whether the billionaire George Soros was shorting FB stock. That was after Soros called Facebook a “menace” at the World Economic Forum in Davos, Switzerland, last winter. (Ain’t it great when members of the power elite turn on each other?) 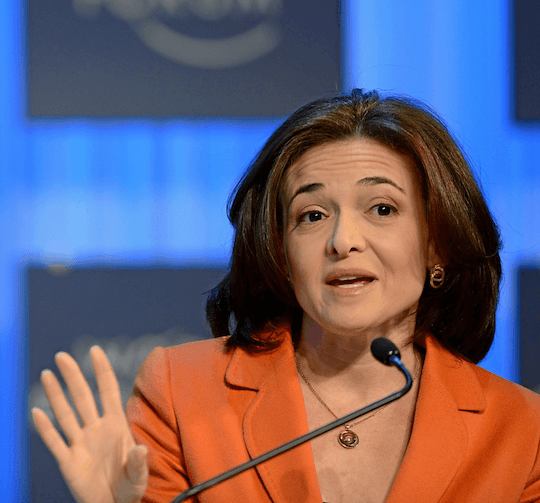 By itself, Sandberg’s request wasn’t so bad — were it not for the earlier revelation Facebook hired a consultant to launch a slimy public-relations campaign aimed at discrediting other liberal critics of FB by painting them as sinister Soros-funded pawns. The campaign veered uncomfortably close to the anti-Semitic tropes aimed at Soros from the sleazier corners of the internet.

(To be clear, Sandberg’s fingerprints have not been found on that particular campaign. Well, not yet.)

“Just another corrupt, corporate shill” could be another way of saying, “Just another product of Harvard Business School.”

Sandberg and the HBS culture that spawned her are the topic of a recent Vanity Fair piece by Duff McDonald. McDonald literally wrote the book on HBS — The Golden Passport: Harvard Business School, the Limits of Capitalism and the Moral Failure of the MBA Elite.

HBS is extremely proud of Sandberg, who earned her MBA there in 1995. For instance, plug her name into the website of the Harvard Business Review and one of the first things that comes up is an article that gushes, “Sandberg personifies Total Leadership by being authentic, acting with integrity and pursuing innovation.”

That’s not much of an endorsement, McDonald writes: “The truth is Harvard Business School, like much of the MBA universe in which Sandberg was reared, has always cared less about moral leadership than career advancement and financial performance.

“The roots of the problem can be found in the school’s vaunted ‘Case Method,’ a discussion-based pedagogy that asks students to put themselves in the role of corporate Übermensch.”

At the risk of oversimplifying, here’s the problem with the Case Method: In many business situations there can be more than one right answer. “But to help students overcome the fear of sounding stupid and being remorselessly critiqued,” writes McDonald, “they are reminded, in case after case — and with emphasis — that there are no right answers.”

From there… it’s only a small leap to the attitude there’s no right or wrong.

The most revealing anecdote in McDonald’s article is told by John LeBoutillier, the former congressman and longtime Newsmax columnist. He was HBS classmates during the 1970s with Jeffrey Skilling — who went on to oversee the epic late-1990s fraud known as Enron. (Skilling was released to a halfway house earlier this year).

In class one day, the students discussed what they would do if they were the CEO of a company and they discovered the firm was making a product that might kill its customers. “I’d keep making and selling the product,” LeBoutillier recalls Skilling saying. “My job as a businessman is to be a profit center and to maximize return to the shareholders. It’s the government’s job to step in if a product is dangerous.”

Many students nodded in agreement.

Let those words sink in: “It’s the government’s job to step in if a product is dangerous.”

To Skilling, to HBS grads as a whole, to American MBA culture in general… it’s an alien concept that companies — much less individual executives! — bear responsibility for their actions.

That’s how HBS alum Sheryl Sandberg is fine with indiscriminately hoovering up your data and allowing them to become vulnerable to a massive breach. It’s the government’s job to clean up any mess afterward.

And it’s how HBS alum Jamie Dimon is A-OK taking huge risks with JPMorgan Chase’s balance sheet. If those risks blow up, the government will use taxpayer money to bail him out.

But it’s even worse than that… because HBS melds that amorality with the aura of expert certainty.

It comes back to a passage we’ve cited before from the book Quiet: The Power of Introverts in a World That Can’t Stop Talking by Susan Cain (highly recommended by Agora Financial contributor James Altucher).

Cain attended an HBS information session, where students learn how to be successful classroom participants. “Speak with conviction,” is the message Cain came away with. “Even if you believe something only 55%, say it as if you believe it 100%.”

Within HBS culture, Cain observes, “If a student talks often and forcefully, then he’s a player; if he doesn’t, he’s on the margins.”

HBS students “look like people who expect to be in charge… I have the feeling that if you asked one of them for driving directions, he’d greet you with a can-do smile and throw himself into the task of helping you to your destination — whether or not he knew the way.”

How far down the hole we’ve fallen, observes the clinical psychologist Bruce Levine: “Our society once routinely called people ‘bull**** artists’ if they spoke with total certainty without any basis for such certainty so as to persuade others and get attention for themselves.

But the approach undoubtedly “works.” It’s how HBS alum Robert McNamara, as U.S. defense secretary, successfully sold the Kennedy and Johnson administrations on ever-deeper involvement in the Vietnam War. (He was shown the door a few weeks after the Tet Offensive in 1968 — immediately landing as president of the World Bank!)

And… it’s how HBS alum George W. Bush successfully sold the Iraq War to both the elite media and millions of everyday Americans.

Whether in government or business, HBS’ culture of fostering both certainty and amorality yields toxic results.

McDonald’s Vanity Fair piece featured some choice quotations from a source he describes as “a prominent female CEO of a New York-based firm.”

Discussing Sandberg and Facebook, she said, “They’re in Silicon Valley, surrounded by their white liberal friends, peddling their version of how great for society they are because they’ve been connecting people.”

And at the same time, “When you get that wealthy, you start to buy your own bull****.”

Substitute “powerful” for “wealthy” and the same thing applies just as well to our political elites.

The new week has begun the way the old week ended — with the stock market sliding. At last check, the Dow has shed nearly 500 points. It’s below 24,000.

Perhaps more significantly, the S&P 500 is down 45 points to 2,587. Recall on Friday Greg Guenthner said 2,600 was a line in the sand. If the S&P closes below that level today, the likelihood of another leg lower will grow significantly.

The currency markets are more active than usual after British Prime Minister Theresa May failed to rally her fellow Tories in Parliament behind a final vote on her plan for the U.K.’s exit from the European Union; it’s conceivable May’s government could fall. The pound has plunged to an 18-month low of $1.25.

With the S&P 500 nearly 12% off its September highs, Zach Scheidt says it’s still too soon to hit the panic button.

“There’s an old saying on Wall Street,” he reminds us, “that ‘bull markets climb a wall of worry.’

“It means that the most reliable bull markets occur when investors are worried about some big, specific issues. (Like a trade war or interest rate hikes, for example.)

“During these times, investors keep money out of the market and park it in safe places on the sidelines. This extra cash then becomes the fuel to drive the market higher when investors finally start to worry more about missing out on gains than about a specific risk… and eventually put that money back into markets.

“The time you need to worry about a bear market starting is not when there is a big issue investors are afraid of,” Zach goes on. “It’s when there is no worry present and everyone is optimistic.

“That’s when buyers have most of their wealth committed, stocks trade at extremely high valuations and there is very little that can be done to make things any better.

“Once you reach the top of the mountain, there’s only one way to go… And once all investors buy into a bullish story, the market is likely ready for a decline.

“We’re not at that place right now. It doesn’t mean that we’re not paying close attention to the risks in specific stocks and certain sectors. But the broad economy should continue to do well, and in the next few quarters I expect U.S. markets to continue to climb a ‘wall of worry.’”

Perhaps market historians will look back on Friday as the day that pot stocks “arrived.”

“Altria came about as the result of the spinoff of Philip Morris’ international operations back in the mid-2000s. Altria became the name of the U.S. part of the business. Problem was all the growth in tobacco is in emerging markets.

“To avoid being fully exposed to a slowly dying industry, Altria invested heavily in other assets, picking up a huge stake in what’s now Anheuser-Busch InBev and buying Chateau Ste. Michelle Wine Estates.

Cronos, meanwhile, is one of Ray’s picks in Penny Pot Profits — up 56% since he recommended it in March. If you haven’t yet dipped your toe into the sector, Ray says the next five days are an ideal time to get started — as he explains right here.

To the mailbag: “The arrest of the Chinese CFO/founder’s daughter is like something out of Game of Thrones,” a reader writes.

“Kidnapping someone’s daughter? These are the types of actions that start shooting wars.

“What happens when a U.S. Navy vessel gets too close to a Chinese base and is captured or sunk (replay the Ukrainian violation of Russian waters last week) or U.S. executives find themselves in Chinese courts, whisked out of airports or planes?”

The 5: Developments since our brief discussion on Friday are, if possible, even more dire than we portrayed then.

Canadian prosecutors have confirmed that Meng Wanzhou is wanted on U.S. charges of using a cutout company to do business with Iran while U.S. sanctions were in place between 2009–2014.

So a Chinese company sought to conduct commerce with an Iranian company. What’s it any business of the United States? Well, as the French finance minister said earlier this year, Washington is “the economic policeman of the planet.”

We’re reasonably certain after Meng’s arrest that the authorities in Beijing are accelerating their “de-dollarization” plans.

P.S. Our customer care director has been trying to reach out to thousands of readers since this past weekend — about something happening today.

If you missed his email, you can quickly get up to speed by clicking this link.