“To every thing there is a season.”

You’ve heard the saying, of course — if not from that best-seller called the Bible— than most certainly from The Byrds’ catchy song “Turn! Turn! Turn!” that topped the charts in 1965.

(Fun fact: The song was actually written by Pete Seeger… Who knew?)

Our point in bringing up this adage, however, is that even stocks experience seasons…

“Some of the best ways to choose hot stocks are to look for trends and repeating patterns,” Tim continues, if you’re “looking for an edge to earn money with the least amount of risk possible.”

Tim should know… If you recall his background, he took a $12,000 grubstake — his bar mitzvah money — and traded his way to $2 million. As if that’s not impressive enough, he did this during the 2000–02 dot-com bust. So yeah, Tim knows a little something about the cyclical nature of stocks.

“Stocks can follow a variety of different cycles,” says Tim.

“A stock that is representative of a seasonal industry might boom during certain times of the year but could be relatively inactive during the off-seasons.”

Take lobster rolls, for example… (Yes, you read that correctly.)

Lobster roll joints in the Northeast are typically just open from Memorial Day to Labor Day — tourist season. But Tim notes: “Who goes to New England for a lobster roll in February?”

Fair point… (But anyone else hungry?)

The same goes for companies — demand waxes and wanes, affecting profitability — and that’s what investors should be keyed into.

“As an investor, you could potentially look at these seasonal trends and stand to gain from taking advantage of the resulting rise and fall of a stock,” Tim says.

“Stocks can follow a variety of different cycles.” Here’s a quick rundown:

Seasonal stocks: “These stocks are characterized by a demand at different times of the year,”Tim says.

“For instance, a company specializing in bathing suits is probably not as active during the fall and winter months but may enjoy surges in the spring (when swimming attire debuts in stores) and throughout the summer,” Tim says.

Nonseasonal stocks: “This means that the time of year won’t necessarily have a huge impact on the stock prices of companies within this industry.”

Instead of bathing suits, think T-shirts. Sure, they might sell more in warm-weather months, but they really sell year-round.

Cyclical stocks: “These are the types of stocks that follow the general trajectory of the economy,”Tim says.

“These stocks are tied to how people choose to spend their money.”

Luxury brands — for example — tank during market downturns. “If there’s a crash,” Tim says, “nonnecessity luxury items are one of the first sectors to suffer.”

And investors should pay attention: These companies also can be among the first indicators of a market boom… or bust.

Think of companies that manufacture pantry/medicine-cabinet staples: “The demand for these items won’t be altered by the economy,” Tim says, “because they attend to basic needs.

“Therefore, the stock price is less likely to make a big move based on the economy.”

In addition: “There are a few reliable stock market trends you can consider when thinking about seasonal stocks,” Tim says.

“You’ll also see reliable highs and lows in certain markets at different times of the year,” Tim says. “In December, many investors want to unload losing positions before the close of the calendar year, so you’ll often see a lot of trading action at this time…”

Tim says: “Examining stock market trends and the seasonality of different stocks can help you create a stronger plan of attack when planning trades.

“Usually, choosing a good seasonal stock to invest in boils down to common sense.”

The following chart shows the periods of seasonal strength for each stock sector: 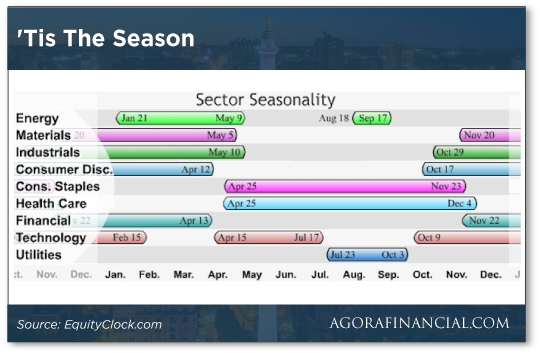 “Each bar… indicate[s] a buy and sell date based upon the optimal holding period for each market sector,” according to website Equity Clock.

Tim notes: “It’s a great way to make use of historical data.”

“Could seasonal stock market trends give you an edge?”

“You can… often gauge certain sectors that might have more seasonality than others,” says Tim.

“For instance, oil, retail, health care and banking are just a few of the industries in which you can notice seasonal trends.

“However,” Tim warns, “don’t fall into the trap of thinking that seasonality is a done deal. You can never know for sure how a stock will perform because the market constantly changes.

“You need to do a deep analysis, look at financial and earnings statements and compare historical data to gain a realistic picture of when might be the best time to trade.”

[Ed. note: To that end, Tim’s inviting you to a one-of-a-kind interview with Larry King.

They will not only discuss the American retirement crisis…

The two will share details about a brand-new way to collect income and potentially overcome their retirement issues.

And in case you’re wondering, there are no options… strictly stock trades.

So, as a valued reader, we urge you to reserve your spot for this exclusive sit-down… which will be privately broadcast Wednesday, Dec. 12, at exactly 1 p.m. EST.

Click here now to learn more and reserve your spot. You won’t want to miss it!

To the markets, where a dose of Dramamine is in order…

By yesterday’s close, the S&P 500 pulled back above the 2,600 “line in the sand” identified by Greg Guenthner — averting the dreaded “correction” territory of a 10% drop from the S&P’s September record. Right now it’s holding at 2,640.

“The stock market hasn’t been kind to the bulls this winter,” says our Alan Knuckman from the trading pits at the CBOE.

“And following last week’s 5% drop in the S&P,” Alan says, “a so-called ‘death cross’ has formed on its chart.”

“This chart pattern occurs when a security’s 50-day moving average (DMA) crosses below its 200-DMA — and both averages are in decline.

“The pattern gets its ‘deadly’ moniker because some investors claim that when we see one, it spells doom for the asset in question.” Or the market at large… gulp.

“In fact, in the medium–long term following a death cross, price action in the S&P is actually positive.” (Emphasis added.)

According to Bespoke Investment Group, there have been 12 S&P “death crosses” since 1929. Granted, market returns have been historically negative in the month following the moving-average cross.

“In addition, the broad market gains an average of 7.5% in the six months following the appearance of a death cross,” says Alan, “and it’s positive a whopping 83% over that span.

“In other words, a death cross could easily mean new life for the current beast of a bull market.”

In fact, Alan sees signs of stocks’ turnaround: “In each of the last three sell-offs since September, the S&P has tested — and held — at the key support level of 2,600.

Alan goes on to say, “Despite the whipsaw action of the last few weeks, the VIX hasn’t yet broken out above its October high.”

So looking to buy stocks at a discount? Alan concludes: “Do it now before stocks recover post-death cross.”

“Over the past 30 years,” he says, “global stocks have gained an average of 2% during the month of December.

“That’s the best performance of any other month of the year.”

But is that a thing of the past? “More recently,” Mike says, “the holiday seasonal surge has been less consistent. In fact, stocks have declined in two of the past four years during December.”

“There is one place investors have been able to seek some refuge from turbulent market conditions,” says Mike: “High-quality defensive stocks. 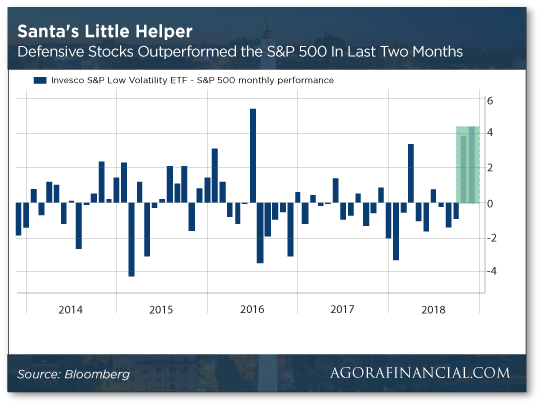 “Low-volatility defensive stocks have easily outperformed the S&P 500 over the past two months. I expect this trend to continue.”

So what are the best stocks to own going into 2019?

Mike says: “Companies with stable, predictable earnings, low debt and consistently growing dividends are the stocks to own in this environment.”

In today’s market environment — with interest rates and volatility on the rise — Mike recommends these sectors: technology, consumer staples, health care and industrial.

If you’re looking for an easy way to take advantage of these sectors, look no further than the Invesco S&P 500 Quality ETF (SPHQ). “This ETF has 72% of its assets invested in technology, consumer staples, health care and industrial shares,” says Mike.

“And it provides a great antidote to increased market volatility.”

This is weird: “For one day only you can get chocolate coins from a cash machine outside Tate Modern,” says an article at Londonist.

If you’re looking to get your chocolate fix today — and happen to be in London — the “Zopa’s cash machine can be found on Bankside from 9 a.m. on Dec. 11, awaiting punters looking to get their hands on the sweet stuff.”

Not being hip to English slang, we had to look up the definition of punter; suffice it to say — for the Londonist’s purposes — it means gambler… or customer. In fact, the term’s quite — ahem — nuanced…

At any rate, here’s the gamble: “Chocolate coins aren’t guaranteed; you’re only getting them if you’ve been nice this year. If you’ve been naughty… well, then you get a lump of coal.”

To be sure, it’s a lump of chocolate coal, so a win-win wager, we’d say.

And just how’s your status — naughty or nice — determined?

“The traditional — and not at all Big Brother-y — method of analyzing the language used in your tweets for the last year.” (We can’t make this stuff up, folks.)

In fact, you can check your status before your visit to the Tate here. 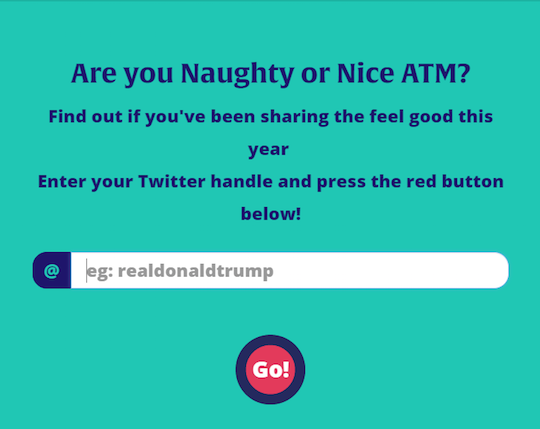 Did you catch whose Twitter handle’s used as an example? For the record — and the sake of hard-hitting journalism — we had to check out the president’s status.

Trump was determined to be 78.29% naughty, according to Zopa’s “FeelGood-O-Meter.”

Would you expect anything else?

But — for the life of us — we can’t decide how to file this story: The War on Cash? The War on Privacy?

P.S. Need to play catch-up on your retirement savings?

In this exclusive interview, America’s No. 1 trader will reveal a moneymaking strategy that can show you how to walk away with the potential to add thousands to your nest egg.

In as little as a single day.

The best part: The event is absolutely free and you can watch from the comfort of your own home.

View all the details here… But hurry, because space is limited and it’s happening TOMORROW, live at 1 p.m. EST.