As we write this morning, the Santa Claus rally has been aborted.

“The clock is ticking and funds have to meet redemption requests by Dec. 31, which means they’re forced to sell stocks. According to a trusted colleague of mine, at least 144 hedge funds are closing their doors by year-end and must liquidate trillions of dollars in stock holdings.

“Too many sellers and not enough gun-shy buyers — it’s as simple as that.”

But forget the fourth-quarter swoon for a moment. Let’s zoom out to the long view.

Our resident chart hounds are out this week, but I can slap a basic trendline on a chart of the Dow going back to the March 2009 bottom. 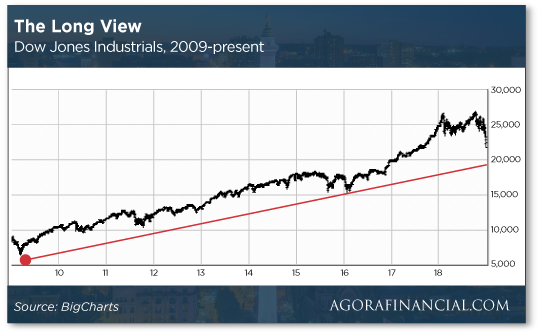 As it happens, Dow 20,000 is the level that would dissuade the Fed from raising interest rates again next March.

After last week’s increase, the fed funds rate stands at 2.5%. For a couple of years, Jim Rickards has been telling us the Fed is hell-bent on raising the fed funds rate to about 3.75%… so it can meaningfully lower the rate again to combat the onset of a new recession.

That implies increases of a quarter-percentage point every three months from now through March 2020.

Only three factors would derail these plans…

Via Twitter last Saturday, Jim put some fresh numbers to those three factors…

The core PCE number is running at 1.9%. The last time the monthly job number went outright negative was in 2010. So if anything is going to throw the Fed off track right now, it’s the stock market.

Of course, the risk all along is that a new recession would set in before the Fed could reach that 3.75% target on the fed funds rate.

But that appears unlikely at the moment, according to a reliable recession predictor.

The Chicago Fed National Activity Index crunches 85 economic indicators to come up with a single composite number. The danger zone is a three-month moving average of minus 0.7 or lower. That level has accurately heralded the arrival of all but one recession in the last 50 years. (It was late to the party with the 1973 oil shock.)

The latest number came out on Christmas Eve. It’s plus 0.12. Nowhere near the danger zone… 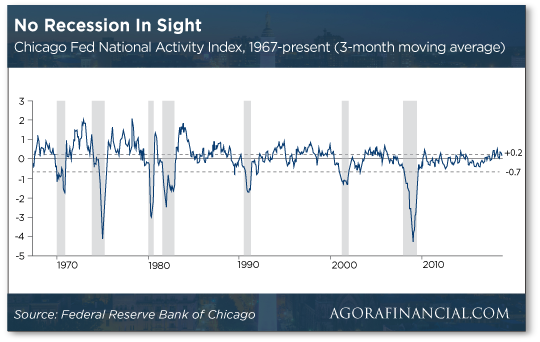 The Philadelphia Fed has its own number that’s also a reliable recession predictor, and it comes out tomorrow. We’ll be sure to pass it along…

Took long enough for the mainstream to catch on to what we call “the attack of the passive robots.”

JPMorgan analyst Marko Kolanovic says it adds up to 85% of all stock trading. That is, only 15% is driven by human beings evaluating sales, earnings, the economy and other “fundamental” factors.

We first spotlighted this phenomenon on Sept. 14, 2017… and revisited it most recently a month ago. As we said at the time, robo-investing and passive indexing create self-reinforcing distortions. It feels great as long as the market goes up. But when the stock market turns south, we warned, the process feeds on itself in reverse.

Affirmation comes in the Journal piece from one Neal Berger, an asset manager whose firm invests in hedge funds and other vehicles. “The speed and magnitude of the move probably are being exacerbated by the machines and model-driven trading,” he says. “Human beings tend not to react this fast and violently.”

Well, you saw it here first, as much as 15 months ago. For whatever it’s worth, the Dow is slightly lower now than it was then.

At least the Journal was able to put a number to the phenomenon… but did it really take four reporters to put that story together? Heh…

There’s a frightening oversight in that Journal story, by the way. It bears closer attention, especially in light of the evidence a recession isn’t nigh — at least not yet.

“The depth and speed of the market downturn,” it says, “are forcing a re-examination of conditions in the global economy and comparisons to previous market downturns that took place without economic recessions.”

The story cited the sharp correction of 1998 that coincided with the Russian debt default and the collapse of the Long Term Capital Management hedge fund. It also cited the correction of late 2015–early 2016.

“In both those cases,” the article avers, “the market bounced back when investors regained confidence that the U.S. economic expansion was intact.”

No. In both cases, the market bounced back when the Federal Reserve intervened.

In 1998, the Fed engineered a bailout of Long Term Capital Management. Then it proceeded to slash the fed funds rate from 5.5% to 4.6% in the space of two months.

The market slide of 2015–16 came on the heels of the Fed raising the fed funds rate from near-zero levels for the first time since 2008. The slide ended in February 2016 only when the Fed signaled it would not raise the rate as aggressively as first suggested the previous December. (Indeed, the Fed wound up holding off till the following December before raising the rate again.)

At least right now, there’s no sign of similar Fed intervention on the horizon. And even if the Fed holds off on another interest rate increase in March… it’s still committed to shrinking its bloated balance sheet, which has the same effect as raising interest rates.

Gold’s rally of recent days is carrying on into the final days of the year. At last check, the bid is $1,276 — a six-month high.

Crude, meanwhile, is rallying hard off the lows of last week. A barrel of West Texas Intermediate is up more than 6%, back above $45.

So much for the Unified Trump Theory. Good thing we didn’t expend much of our intellectual capital on it.

We posited the Unified Trump Theory shortly after Labor Day. The theory — really, more of a thought experiment — went like so: Trump will do whatever the Deep State tells him from now on, lest he face prosecution for campaign-finance felonies once he leaves office. We figured the theory might help us suss out his plans for economic policy.

But Trump’s orders to withdraw U.S. ground troops from Syria blow the theory out of the water.

It was his actions in Syria that gave us confidence in the theory to begin with. He appointed a guy named James Jeffrey as special envoy to Syria — even though Jeffrey was one of dozens of ex-government officials who signed open letters in 2016 pronouncing Trump unfit to be president.

Asked about Trump’s pledge last April “to get out” of Syria by the end of this year, Jeffrey said in September, “The new policy is we’re no longer pulling out by the end of the year.”

Not anymore it’s not…

The reaction to Trump’s orders — the groupthink freakout among the “national security” establishment — has been as amusing as it is disturbing.

The establishment cheers a president who starts a war or expands an existing war. Certainly it cheered as Obama grew Bush’s three wars across the Muslim world to seven. But now Trump dials the number back to six and we’re told our system of governance is on the edge of collapse? Give us a break.

That said, the tenuous coalition of lukewarm support that Trump cobbled together inside the Beltway is history. At any given moment, he had sizeable factions of the uniformed military, congressional Republicans and conservative think tanks behind him.

No more. Defense Secretary James Mattis — a retired Marine general, you’ll recall — has resigned in protest. Senate Majority Leader Mitch McConnell says he’s “distressed.” And the Foundation for Defense of Democracies — a highly influential pro-Israel policy shop during Trump’s first two years — is off the Trump train, judging by this tweet from its chief executive… 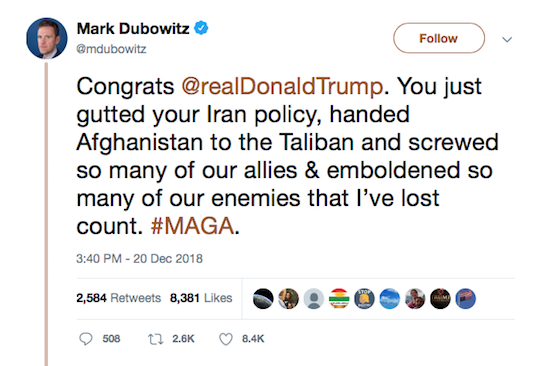 Still, the caterwauling begs the question “Why now?”

The best answer we can come up with is that after two years, the president has realized “his generals” are no more wise or trustworthy than anyone else inside the Beltway. McMaster, Kelly, Mattis — all gone now.

How these developments will affect economic policy is wide open. Around the same time as the president announced the Syria pullout, word emerged that he’s thinking about firing Fed chairman Jerome Powell.

Assuming it’s even true, the name we’re hearing as the most likely replacement is New York Fed chief John Williams — who, like every other member of the Fed’s Open Market Committee, voted in favor of the most recent increase in the fed funds rate. Not exactly a radical overhaul, huh?

And now the most California tax story ever in the history of taxation — well, almost.

California’s Public Utilities Commission was looking at a tax on… text messages. A retroactive tax on text messages going back five years.

See, there’s a state program that subsidizes communication services for low-income and disabled Californians. Its budget has grown 49% since 2011. But because it’s funded by a tax on phone calls, and people are making fewer calls than they used to, revenue for the program has fallen 32% over the same time frame. Thus, the proposal to tax texts. A vote had been scheduled for Jan. 10.

Only, no one had really thought it through. “Does the sender pay? Does the receiver pay?” asked Jim Wunderman of the Bay Area Council, interviewed by USA Today. “What if you move out of state but you keep the California number? What if you drive down to Reno, Nevada, and get a phone? Can you avoid the charge then? These are all things that would be really hard to resolve.”

No, it makes no sense to us, either. But it’s a victory for Californians — especially those who prefer texting to alternative platforms like Facebook Messenger or WhatsApp, which would not have been subject to the tax. (Insane, no?)

“When will I receive the normal version of The 5 again?”a reader inquires. “I enjoy seeing your updates on events.”

We’re back to normal as of today, even though many of Agora Financial’s operations are in a modified holiday mode between now and New Year’s Day. Thank you for your interest!

P.S. As we go to virtual press, the Dow is suddenly up 500 points on the day. No, there’s no obvious catalyst.

So we’re still not ready to pronounce the death of the bull market. But it’s not too soon to go on the prowl for its potential killers. We’ll identify the most likely one tomorrow….