The Biggest Threat to the Markets in 2019

Golly, you’d think the Plunge Protection Team wouldn’t be so, well, obvious about it.

In case you’ve forgotten, the PPT — its formal name is the President’s Working Group on Financial Markets — was formed by Ronald Reagan after the one-day stock market crash in 1987. It consists of the Treasury secretary, chairman of the Federal Reserve and the chairmen of the Securities and Exchange Commission and the Commodity Futures Trading Commission. Its remit is to “stabilize” financial markets during especially volatile episodes.

On Sunday, amid headlines that stocks had just had their worst week since 2011 (or even 2008 depending on what yardstick you used)… Treasury Secretary Steve Mnuchin announced he was convening a meeting of the PPT.

But that announcement got buried by another announcement: Mnuchin had called the CEOs of the six biggest banks in the country. The upshot? According to a Treasury statement, the banks all “confirmed they have ample liquidity available for lending to consumer, business markets and all other market operations.”

Heh… Up until that moment, Wall Street’s “pros” were worried only about a stock market crash. The suggestion the banking system might seize up was the furthest thing from their collective mind… until Mnuchin put it there.

With that, the Dow tumbled another 650 points on Christmas Eve. Shades of the Panic of 2008… when it seemed every weekend Treasury Secretary Hank Paulson would say something to try to calm down the markets, only to make matters worse.

Confidence-inspiring, huh? (Bonus points: Both of them are ex-Goldman Sachs.)

But that was Monday. Yesterday the PPT went to work and the Dow registered its first one-day gain of more than 1,000 points. Exactly what mechanism the PPT used is squishy. They never say anything beyond vague “confidence-building measures,” which leaves us all to speculate. The most common speculation surrounds the purchase of S&P 500 futures.

We heard from a couple of readers after yesterday’s trading, and the reaction was incredulous: “It is hard,” wrote one, “for Main Street to believe that Wall Street is anything other than complete BS when it is down 650 one day and up 1,086 the next.”

As we write this morning, the Dow has given up about 300 of those 1,000 points gained yesterday. Well, it’s still better than Friday’s close.

Crude is backing down after a monster rally in tandem with stocks yesterday; a barrel of West Texas Intermediate fetches $45.35.

Now we turn our attention to the biggest threat to the markets for 2019… and it’s not liquidity in the banking system. At least not right away…

The biggest threat to markets in 2019 comes from the debt racked up by Corporate America in the decade since the 2008 crisis.

“Since the last financial crisis, big banks have made loans to corporations with the cheap money that the Fed lavished upon them,” says our Nomi Prins, who broke free from a career in investment banking to become a rare Wall Street truth-teller.

Nomi was in Washington earlier this month, meeting with regulators and lawmakers — who she tells us are less clueless to this looming crisis than you might think.

That’s the good news. The bad news is there’s not much they can do about it.

It all comes down to two words — credit risk.

“Credit risk,” says Nomi, “is the risk to a lender that a borrower won’t be able to make interest payments on a loan or bond in a timely fashion and thus will ultimately default on them. That borrower can be a person, a company or a country.

“The lender faces the risk of losing expected cash from these payments. The situation is worse if that lender is counting on that money to make some other kind of payment — to a supplier, to workers or to another bank.

“There has been a record amount of corporate debt issued since the crisis, usually with banks as the middlemen between corporations and investors.

“The problem comes when those companies face problems of their own and therefore run into trouble repaying interest on those loans or bonds. The risk is compounded if one company defaults on its debt or a loan and other companies in the same sector do the same.”

Now for some numbers to give you a sense of the problem’s scope.

“The amount of debt held by high-grade nonfinancial companies has increased by 10% each year since 2010,” says Nomi.

“That figure is double the 5% growth rate of the earnings for those companies. That means that for every dollar they made, they borrowed two.”

For a long time that was OK because interest rates were so low. “Companies could borrow more to repay existing debt at these cheap rates. They could also use that money to buy their own stock and make them appear healthier than they were by virtue of pushing their share prices up.”

But no more. Not with interest rates rising, making those debt payments more expensive. “The value of U.S. high-grade debt is at its lowest level since 2008,” Nomi says. “In other words, investors are shying away from thinking that the companies holding this debt offer them good returns on their money anymore or can even pay them back at all.

“Companies from General Electric to Sears have been choking on too much debt and not having enough revenue to pay for it. And these firms are just the tip of a very large iceberg.”

We’ll explore this issue in more depth as we get into 2019. But here’s the takeaway for today: Be extremely careful with any bond fund in your 401(k) or other accounts.

Look carefully at the credit quality of the bonds held by the fund. (Morningstar makes it easy. Just click on the “portfolio” tab and scroll down.)

Bloomberg recently analyzed the whole of the corporate bond market. About two-thirds of the bonds out there are investment grade. Another one-third are junk bonds — high yield, but with high risk to match.

Here’s the problem: About half of the investment-grade bonds are rated BBB — one notch above junk.

If the economy takes a turn for the worse or if interest rates keep rising… it won’t take much for the rating agencies to downgrade many of those BBB bonds to junk status.

Managers of investment-grade bond funds would have to sell the newly downgraded holdings in their portfolios. The likelihood of that selling proceeding without some hiccups? Slim.

Even without that risk, bond funds are trouble in a time of rising interest rates, like now. The yield you collect is outweighed by the loss in principal. You’re much better off holding bonds of individual companies — where you’ll know you’ll get paid on a regular basis and get all your principal back. Play it right and you can collect up to $5,092 every month.

How do you select individual corporate bonds? We have a premium service that does the work for you… and we have a special deal running through midnight tonight. Check it out for yourself right here.

The big tech companies are on their heels in late 2018… but a move into health care might well shore up their fortunes in 2019.

But that’s not all. “Last month, Amazon started selling software that will comb through patient records that in turn could be used by doctors and hospitals to provide better treatment.”

Meanwhile, “Google recently hired a well-known hospital system chief to oversee the health care side of their business.

“And Apple has been stepping up its game. The new Apple Watch is just one example. There is an EEG monitor that can provide doctors data while you’re on the go, fall detection that can direct you to help immediately, a breathing app to help you reach a calm state and so much more.”

Longer term, ATHN has “a number of specialized networks and software… As the medical field becomes more and more dependent on medtech, companies like Athenahealth stand to benefit greatly.”

We’re a couple of months late, but we owe you follow-up coverage on a couple of exceedingly weird — and dangerous to life and limb — stories of financial manipulation from early 2017.

We’ll start with the plot to bomb a bunch of Target stores up and down the East Coast. The perp — Mark Charles Barnett of Ocala, Florida — has been sentenced to 40 years in prison.

Prosecutors said Barnett planted explosives in packages of stuffing mix, breakfast bars and pasta… and then offered someone $10,000 to plant the bombs on Target shelves in Florida, Virginia and New York. Fortunately, that “someone” went to the cops instead. 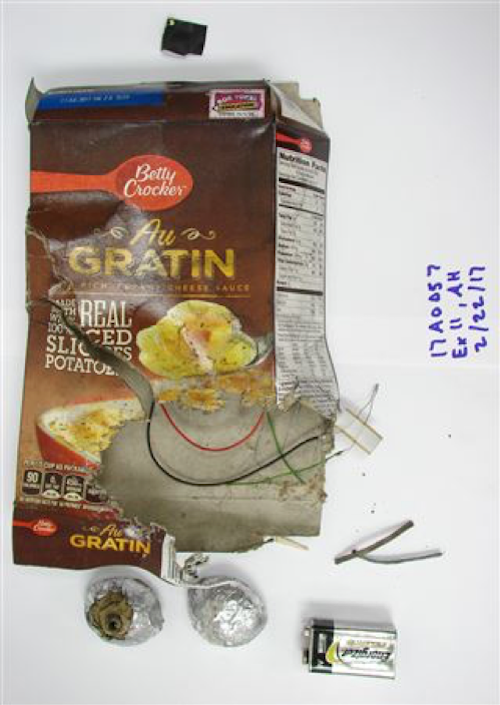 Yeah, this was a real plot with real explosives — not one of those entrapment schemes the feds gin up with the help of an informant. [Justice Department photo]

Barnett’s objective: Temporarily tank TGT’s share price so he could buy shares cheaply before they rebounded. For real.

Said Barnett, “If someone has to die so that I can make some money, so be it,” according to prosecutors.

Sergei Wenergold says he didn’t intend to hurt anyone for his moneymaking plot… but he did.

In April of last year, a bomb attack targeted the bus of the Borussia Dortmund soccer team. Metal pins flew everywhere. A player and a police officer suffered minor injuries.

Police found letters near the scene indicating links to ISIS. But on further investigation, that turned out to be a ruse. They arrested Wenergold, a dual citizen of Germany and Russia.

Police say he bought put options on the team’s publicly traded shares. That is, he was betting the share price would fall after the attack and he’d get a huge payday.

The scheme might have worked were it not for the fact he was staying at the same hotel as the team, and that’s where police say he executed the trades. As if the cops weren’t going to comb through every kilobit of internet traffic in the vicinity, right?

From a Bloomberg Businessweek story in October: “According to investigators, Wenergold could have made as much as 570,000 euros ($607,933.50) in the unlikely event that BVB stock hit zero in the immediate aftermath of the attack. But his scheme didn’t pan out.

“By the time the German stock exchange opened the next day, April 12, the limited injuries had been widely reported and management had already announced a new date for the quarterfinal. BVB stock briefly dropped 2%, then more than recovered by the end of trading, leading Wenergold to sell most of his options the next day at a loss.”