As The Markets Churn

“We’ve seen much more pain than gain lately,” says Alan Knuckman from the trading pits at the CBOE. “If you’re a trader… the struggle is real.

The way Alan sees it, the silver lining for investors this year has been the return of something that had been largely absent from the markets: volatility.

“From a valuation perspective,” he says, “equities are getting cheaper and more attractive by the day as the market churns.”

To that end, smart investors like Alan “took advantage of the drops to buy stocks on the cheap… and sell into strength.

“And as I’ve often said this year, despite trade war woes and talks of a global growth slowdown, stocks are STRONG.

“So… no, we aren’t heading toward a recession next year.

“I’m not crazy enough to pick a bottom,” Alan says, “but I see much more upside than downside for stocks in 2019.”

That’s because Alan doesn’t get it twisted — he separates the U.S. economy from the U.S. stock market.

Not only that, but unemployment is under 4% and might drop even lower next year.

And did we mention December’s holiday retail rally?

Alan says: “Retail is expected to report big earnings beats next quarter, as this year’s wealth effect has culminated into a no-holds-barred spend-fest over this holiday season.”

On the subject of earnings, Santa Claus might not have come through for investors in December but earnings season is less than a month away.

“That’s when the market’s focus will shift back to fundamentals.”

So… “before you tar and feather me as a permabull that’s devoid of logic,” Alan says, “here are three HUGE reasons to stay in the game next year…

Alan says: “The sharp sell-offs are giving you the chance to buy stocks at multiyear discounts — putting risk to reward squarely in YOUR favor.

“But don’t expect the sale on stocks to last long,” he warns.

Inflation has NOT exploded

Along with that, Alan says, “expect the Fed to significantly slow down the pace of its interest rate hikes.

“According to CME’s FedWatch,” he notes, “Fed fund futures are pricing just a single interest rate rise in 2019.

“Put simply, expect the slowdown in rate hikes to fuel a rally in stocks.”

There are (still) no better alternatives

“When you look at the alternatives,” says Alan, “you’ll quickly see why stocks are still the place to be.

“The U.S. 10-year Treasury — the market’s most popular risk-free instrument — is currently yielding a mere 2.75%. On a total return basis, the note’s investors have enjoyed a negative 1.6% for their troubles.

“Though the three-month LIBOR (a measure of short-term bank interest rates) has risen 77% over the last year, it’s still just a pathetic 2.8%.”

Granted, cash has outperformed during the market’s recent rout — and might do so for a short time to come — “but with another year of big growth expected in corporate America next year… that outperformance is not bound to last.

“Here’s the bottom line,” Alan says, “if you’re looking for maximum return on your hard-earned capital, stocks are where you want to be in 2019.

“And right now, you’re staring at one of the best buying opportunities you’ll get over the next 12 months.”

[Ed. note: While Alan wouldn’t pick a market bottom, he believes the S&P 500 will appreciate by a staggering 17.1% over the next 12 months.

And Alan believes this is a fast-moving situation… if you want to get in while stocks are still a bargain.

To take full advantage of Alan’s wealth-building strategy, you’ve only got until this Monday, Dec. 31.

Here are all the details about this urgent opportunity.]

This obscure economic report crunches four job numbers across all 50 states. Only three states are backsliding in any way — North Dakota, Hawaii and Maine. 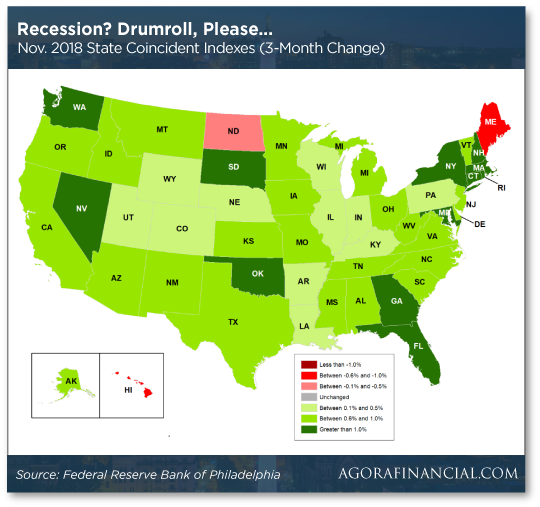 But even more revealing is the “diffusion index” that turns those 200 numbers into a single revealing composite on a scale of minus 100 to plus 100. When the composite dips below plus 50, that’s signaled the onset of every recession since the Carter administration.

The latest diffusion index? Plus 80.

“Not if you’re following my advice and are focusing on select, high-quality dividend-paying stocks,” he says.

While Wall Street snobs might have you believing dividend stocks are for the most unsophisticated investors, “they’re also some of the best performers during times of stock market weakness.”

In fact, “42 out of the 53 dividend aristocrats, stocks that have raised their dividends for 25 or more years, actually increased in share value during the month of November.”

Yep, you read that correctly…

While the rest of the market was taken out to the woodshed, 79% of these dividend stocks actually went up.

Here are some impressive examples:

So while your friends were grousing about getting clobbered at the market, you could’ve been — humble bragging? — about your pre-Christmas bonus.

“The icing on the cake is U.S. companies are also returning money to shareholders in the form of stock buybacks,” Mike says.

The only thing sweeter than a dividend showing up in your brokerage account is a bigger dividend.

“And American companies are giving out a mountain of ‘raises’ to their shareholders this year.

Including the following companies…

For even more generous dividend payouts, Mike says: “Expand… your horizons beyond the U.S. borders.”

For example: “The Janus Henderson Global Dividend Index, the 1,200 largest companies in the world by market capitalization, paid out $354 billion of dividends in the third quarter.

“In short,” Mike says, “companies are making more money than ever and are passing on those profits to their investors.

“[Dividend stocks] are perfect for anybody who enjoys cashing fat checks and doesn’t want their portfolio to get slaughtered when the stock market is struggling.

“That’s the definition of a WIN-WIN!”

“While stock markets have taken a bit of a beating, cryptocurrency markets are up by more than 30% over the past five days,” says crypto expert James Altucher.

James attributes crypto’s bounceback to details about a blockchain project… sponsored by Facebook.

“In a report released by Bloomberg,” James says, “the company revealed ongoing discussions to develop a proprietary cryptocurrency for its WhatsApp messaging platform.

“Facebook is currently investigating the development of a stablecoin targeted at the $69 billion Indian remittance market.”

A stablecoin is a crypto that aims to duplicate the stability of fiat currency “while providing the convenience and security of digital currency,” says James.

And “the implications of Facebook’s launch could be massive,” James continues.

“For one thing, Facebook’s cryptocurrency initiative could motivate businesses to consider accepting cryptocurrencies as a payment method.”

An alternate payment method might be particularly welcome in India, where the government’s waging an aggressive war on cash. And WhatsApp has 200 million users in India alone.

“Although Facebook’s initial implementation focuses on the remittance market, if user adoption is robust, it’s likely we’ll see the expansion of this initiative into other payment use cases,” James says.

“Facebook’s efforts to educate its users on the benefits of the initiative could have a spillover effect onto other cryptocurrency projects.”

James concludes: “The launch could have a positive impact on adoption of all cryptocurrencies. Facebook’s product would help improve awareness, acceptance and trust of digital assets.”

“A suspected armed robber has been caught after a bank was held up in a remote archipelago near the North Pole,” says SkyNews.

Last Friday, a robber — described as a “foreign national” — reportedly used a gun to hold up a bank (only bank?) in the archipelago’s capital, Longyearbyen, population 2,000.

“The heist was a first for Svalbard, which is located in the Arctic Ocean halfway between Norway and the North Pole,” the article continues, “and is famous for its glaciers and polar bears, which outnumber the human population.” 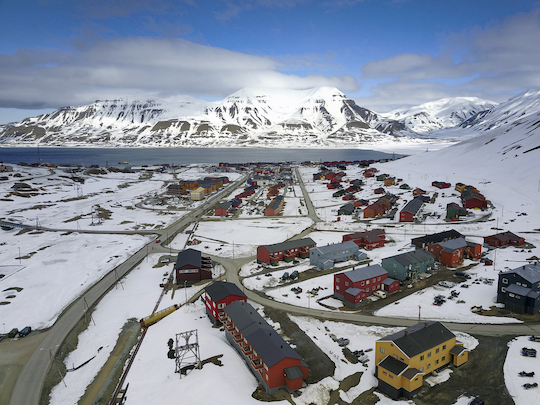 Not to worry. The would-be robber was quickly apprehended — he might have forgotten that a getaway car simply wouldn’t do in Svalbard, where the primary mode of transportation is a plane.

Escaping on foot’s out of the question: Winter temperatures hover below -4 F and can drop below -40 F.

And did we mention the polar bears?

No word yet on the suspect’s identity; however… considering the proximity to the North Pole, we wouldn’t be surprised if the suspect wore a red and white suit and had “a little round belly/That shook when he laughed, like a bowl full of jelly.”

Then again… he could’ve absconded in a getaway sleigh.

P.S. Our customer care director, Brad Anderson, has all of the details on an urgent opportunity HERE.

This is a fast-moving situation…

You only have until Monday to decide if you’re in or not.