“What has been disclosed looks like the misuse of power and influence… and violations of the FBI’s own policies regarding free speech,” says lawyer David Shapiro.

Buried in the inside pages of The Wall Street Journal last week was an eye-opening story. On the surface it might appear to be nothing more than a urination match between spoiled rich dudes. In reality, it’s a story about how the D.C. swamp really works.

And while the story didn’t say so directly, it’s also about the threat the swamp poses to everyone’s free speech rights — especially in this day and age of social media. 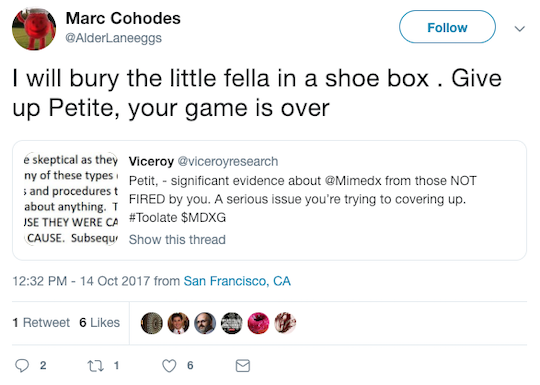 That was a few days after Cohodes spoke at an investor conference in New York, slamming MiMedx (MDXG) — a maker of amniotic tissue grafts — and its CEO Parker “Pete” Petit. Cohodes told hair-raising tales of employees who informed Petit about extensive wrongdoing at the firm only to be fired.

Since then, the company has come under federal investigation for its accounting and sales practices, and Petit was fired by the board. MDXG shares have collapsed from $13.50 at the time of Cohodes’ presentation to $1.50 as of this morning.

As for the tweet… Well, the whole thing was something of an in-joke. According to Cohodes, former MiMedx sales reps told him stories of employees stashing human tissue in shoeboxes that they later sold to hospitals and doctors. And he has a habit of referring to MiMedx CEO Petit as “Petite.”

At a time when people are “deplatformed” from social media for language that allegedly “harasses, intimidates or uses fear to silence someone else’s voice”… it’s a wonder Cohodes wasn’t banned from Twitter. But he wasn’t.

Instead, something much worse happened: Petit sicced the FBI on Cohodes with the connivance of a U.S. senator.

The Journal did some good reporting here, obtaining damning documents via the Freedom of Information Act. (We’d expect nothing less of a story with Gretchen Morgenson’s byline. She’s one of the few mainstream reporters who still uncovers real news.)

The documents are heavily redacted… but they paint a clear enough picture. Only three days after Cohodes’ presentation in New York, Sen. Johnny Isakson (R-Georgia) called the FBI.

“Mr. Petit has been a political supporter of Mr. Isakson, contribution records show, and Mr. Isakson has called Mr. Petit a longtime friend,” the Journal points out.

The FBI responded the same day. “Really appreciate your fast help on a Friday,” wrote an Isakson aide to the FBI the following Monday.

The FBI showed up at Mr. Cohodes’ doorstep in the San Francisco area seven weeks later — on Dec. 1, 2017.

They inquired about two of his tweets, including the one above. Cohodes says he recalls one of the agents telling him to stop posting “threatening tweets.” He asked them to leave, he says, but they refused. They left only when Cohodes called the county sheriff and the sheriff showed up.

For its part, the FBI gave the Journal only a generic statement about how “all FBI investigative activity is premised upon the fundamental duty of government to protect the public.” Of course.

Meanwhile, get the response from Sen. Isakson’s spokeswoman, one Amanda Maddox: “Constituents contact us when they are seeking help from a federal agency and, in many cases such as this one, when they want to make sure the agency is aware of their concerns about an issue.”

Really, Ms. Maddox? We’re supposed to believe Petit’s inquiry was handled no differently from, say, a retired textile worker in Macon wondering why his Social Security check was late? Riiight!

Cohodes’ lawyer — the David Shapiro fellow we cited off the top of today’s episode — wrote a complaint letter to the FBI, who blew him off: “In this instance, the Special Agents complied with FBI policy and we consider this matter closed.”

Let’s be clear. Mr. Cohodes’ tweet is absolutely protected speech — even if it did imply violence, which anyone with a modicum of judgment can see it didn’t.

In the landmark 1969 case Brandenburg v. Ohio — discussed in our borderline-seditious year-end episode of The 5 three years ago — the Supreme Court threw out a case against a Ku Klux Klan leader who gave a speech threatening violence against certain government officials.

The Court held that only speech “directed to inciting or producing imminent lawless action” was fair game for prosecution — for instance, standing outside someone’s house with an angry mob and telling them to burn it down that instant.

So what’s all this to you — aside from being cautious about what you post on social media? Well, never talk to the FBI without a lawyer, even if you think you’re innocent.

Cohodes appears to have taken that advice to heart. Donald Trump’s first national security adviser, Michael Flynn, not so much. He figured there was no harm because he “had nothing to hide” — and he might face prison time as a result.

In fact, it’s sound advice to not talk with any law enforcement unless you have a lawyer present. The decade-old YouTube videos by professor James Duane of Regent University are still instructive in this regard. Never heard of ’em before? A web search for “Don’t talk to the police” takes you right there.

Barring a monster rally before day’s end, the stock market will register its first down year since the Panic of 2008.

Yes, there’ve been other lousy years for stocks since 2008. In both 2011 and 2015, the S&P 500 ended the year more or less where it began, with a ton of volatility along the way. This year, we got the volatility… but also a modest loss. Going into today’s trade, the S&P was down 7% year to date.

Not that other asset classes offered a place to hide. Gold is down about 4%. Ditto for long-term Treasury bonds. 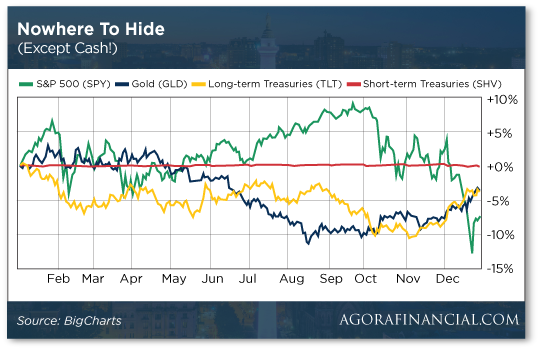 In the end, cash was the place to be. And that chart doesn’t tell the whole story; the flat line for SHV, an ETF that holds only short-term Treasury paper, merely represents the share price. Along the way, you’d have collected a steadily growing yield all year — close to 2% now.

“Stocks are extremely oversold at this point, and a rebound rally is overdue,” says our Mike Burnick.

“How oversold? In the past two weeks alone investors have withdrawn $80.8 billion from stock mutual funds. That’s the biggest month of mutual fund selling on record. The last time retail investors were this bearish was early 2016, when the S&P 500 Index went on to soar nearly 60% higher over the next two years.”

For Mike, that screams “buying opportunity.”

“Remember Warren Buffett’s sage advice,” Mike advises: ‘Be fearful when others are greedy, and be greedy when others are fearful.’ Well, every investor on planet Earth is fearful of stocks right now. It’s time to get greedy and go bargain hunting.

“And that’s the best part for savvy investors: Many high-quality stocks are dirt-cheap right now. And that offers you enormous upside profit potential if you know exactly where to look among the stock market ruins.” (For access to some of Mike’s favorite names, give this a look.)

Sign of the times? At the rate events are moving, tobacco enforcement in New York City could be more hardcore than marijuana enforcement.

Last spring, Mayor Bill de Blasio announced the NYPD would no longer make arrests for low-level pot possession. Gov. Andrew Cuomo has reversed his longtime opposition to legalization; the state assembly might well move to legalize recreational use next year. (More about that later this week.)

Meanwhile, as of New Year’s Day, tobacco can no longer be sold at pharmacies in New York City. The health department estimates the move will cut the number of cigarette retailers by 6.4%.

“People trust pharmacies to help them stay well — they should be helping smokers quit, not the opposite,” says Dr. Herminia Palacio, deputy mayor for Health and Human Services.

OK, but New York is already the cigarette smuggling capital of the country, thanks to sky-high cigarette taxes totaling $5.85 a pack.

Surely the pharmacy ban will only add to the illegal traffic, right? (An enterprising bootlegger would set up shop right outside Walgreens!)

Of course here at The 5 we can’t think about New York City cigarette taxes without thinking about the brutal way collection is enforced — the death of bootleg cigarette seller Eric Garner at the hands of the NYPD in 2014.

Depending on how New York state goes about marijuana legalization, illegal pot trafficking might remain widespread — giving the cops no shortage of tax-enforcement opportunities.

That’s certainly the case in California despite a year of legal recreational use now; retailers and growers alike tell the Los Angeles Times that the Golden State’s tax-and-regulation regime is a total buzzkill.

“The cannabis industry is being choked by California’s penchant for overregulation,” says Dale Gieringer of the pro-legalization group NORML.

To the mailbag: “I had to reread this line Friday: ‘A stablecoin is a crypto that aims to duplicate the stability of fiat currency.’

“The ‘stability’ of fiat currency? Glad to see you folks have not lost your sense of humor.”

“I appreciate Alan Knuckman’s thoughts on distinguishing between the U.S. economy and market and seeing more upside than downside for stocks in 2019,” writes one of our regulars.

“He’s a seasoned pro who is better at trading than I am (which isn’t saying much).

“But, respectfully, I’m struggling with his reasons to stay in the game going forward:

“That’s just my untrained, unprofessional opinion for what it’s worth.

“Love The 5! Thanks as always for the great work you and your team do.”

The 5: All valid points.

The problem is those points have all been valid at various times for the duration of this entire bull market.

You could point to the “Shiller P/E” year after year and say stocks were overpriced. Didn’t prevent ’em from going higher still.

We saw internet screamers as early as 2010 (maybe 2009!) declaring that Fed money-printing would result in a Weimar-style hyperinflationary collapse. Didn’t happen, for the reasons you cite. (And now the rate of money-supply growth is dropping at a rapid clip.)

We’re not trying to be difficult here. We’re just offering nuance. Among our many experts, Alan is almost certainly the most bullish, to be sure. Rest assured you’ll hear other opinions as we continue to look ahead into 2019!

P.S. Markets are closed tomorrow for New Year’s Day, and The 5 will not publish. But we’re right back to it on Wednesday and the rest of the week, peering ahead into what to expect in 2019.