We’re only a little over three weeks into 2019… and we’re already seeing what Zach calls “merger mania.”

When it happened early this month, we mentioned Bristol-Myers’ agreement to buy biopharmaceutical company Celgene for a whopping $74 billion.

But that’s not all; this month alone…

Those are just a few of the headline-grabbing deals happening in corporate America this month.

“While acquisitions have not been in Apple’s core DNA,” Ives says, “the clock has struck midnight for Cupertino…”

“Apple is rumored to be launching its own streaming services as soon as March,” says CNBC. “The venture would allow the iPhone maker to enter a key market as it focuses more on providing subscription services…”

But Ives warns: “If they’re not aggressive in M&A from a content perspective… this will be… the biggest mistake that [CEO Tim Cook] and Apple has made, because that’s the way that the services flywheel is going to work in terms of the install base.”

Good news for Apple, says Zach: “Today, our market is in a perfect spot to trigger these new buyout deals.”

Since the market’s backslide from September highs, companies are looking for ways to bolster their bottom lines. “And one of the easiest ways to do that is by purchasing a rival and capturing their growth,” Zach says.

There’s no arm-twisting necessary: “Lower stock prices make it easier for executives to convince their boards to approve multibillion-dollar buyouts.”

Even if companies don’t have colossal cash reserves like Apple, interest rates are low so it’s easy for companies to borrow cheap money.

“So now… big firms shopping for buyout plays have 1) great deals available to them, 2) motivation to keep earnings growing and 3) funds available to get a deal done,” says Zach.

The thing is — like Zach said at the beginning — these deals move fast.

While Zach was multitasking — scrolling through market news on his smartphone — a curious eavesdropper standing behind Zach struck up a conversation about investing.

“I was especially interested to talk to my new friend Ron when I heard that he was a professional investor in buyout opportunities.” Hmm… kismet?

“There’s just so much competition,” Ron said. “By the time I can get in on a deal that has been announced, the profits have already been made.

“I only get a very small return, and I have to use leverage to make any kind of meaningful money.”

In fact, when Zach was a hedge fund manager, he remembers whole funds that used a buyout strategy Zach calls “picking up pennies in front of a bulldozer.”

“So if you buy at $48.90 after the deal is announced, you have an opportunity to make $1 per share when the deal is complete.

“It may take months for this deal to actually close. But at least you know you’re getting a dollar in profit, right?”

Umm… not so much.

Enter the bulldozer: “While most of these [buyout] deals work,” says Zach, “there’s always a chance that something will go awry.”

“Maybe the buying company can’t come up with the cash it needs to complete the deal,” Zach continues. “Or maybe the Justice Department flags the deal as an antitrust concern and blocks it.”

“Any number of things can cause a deal to fall apart,” says Zach. “It only takes one botched deal to totally erase a year’s worth of gains!”

Zach says: “While… billion-dollar buyouts were completely unpredictable for anyone outside of Wall Street in the past” — and even for some pros like Ron — “a brand-new indicator has finally leveled the playing field when it comes to wealth creation.”

Over the last two years, Zach’s spotted 42 noteworthy buyouts… and his brand-new indicator’s successfully predicted 40 of them. That’s an accuracy rate of 95.2%!

All because Zach’s new system intuits a deal’s about to be announced… a full nine days in advance.

There’s no time to waste…

Because Zach’s “One-Day Bonus” indicator’s signaled another potential buyout in one of the hottest sectors of the market.

Don’t put it off — these deals happen fast, and when companies get bought out you can get paid big-time.

Commerce Secretary Wilbur Ross just said the U.S. is “miles and miles” from a trade deal, prompting Jim Rickards to ask: “How are those tariffs working out?”

From there, things escalated quickly in a tit-for-tat game between the U.S. and China. China announced its own set of tariffs on U.S. goods; Trump slapped tariffs on Chinese steel and electronics.

“China escalated again and the two parties were almost at the point of 25% tariffs on 100% of all goods traded between them before a ‘truce’ was declared in early December to allow time for negotiations,” Jim says.

The truce is void on March 1, by the way.

“Many observers assumed the trade war would lead immediately to a drastic reduction of U.S.-China trade and a reduction in the U.S. trade deficit with China,” Jim says.

“Many analysts interpreted the data to mean that Trump’s trade war is a failure and China will ‘win’ the war.” That’s just not so, says Jim.

“It takes about six months from the time tariffs are announced to when they apply,” Jim continues. “The China trade surplus represents U.S. importers trying to buy as much as they could from China before the tariffs were put in place.

“Since tariffs were announced between January and June, U.S. importers have been busy loading up on inventory in the second and third quarters of 2018 to ‘beat’ the tariff hikes.

“With U.S. businesses loaded up on Chinese inventory, U.S. growth slowing and tariffs finally taking hold,” Jim says, “China’s exports to the U.S. could fall off a cliff in early 2019.”

Nothing has changed. “This trade war is about to get much worse.”

Before we get to commodities, do you think the price of oil will be affected by the insane situation in Venezuela?

Not really… Perhaps because Maduro’s mismanagement has already taken so much of Venezuela’s oil off the global market, the price of oil’s stayed stable — it’s priced at $52.84 per barrel, up 22 cents.

As for the latest on the crumbling South American country, Trump’s recognizing opposition leader Juan Guaidó as de facto president; Maduro’s retaliating by cutting relations with the U.S. and giving American personnel 72 hours to quit the country. What a CF…

“This asset class has moved from worst to first in performance over the past few months,” says wealth and income specialist Mike Burnick. 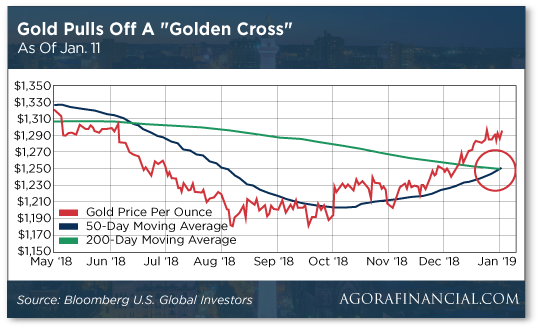 Mike explains: “This is when the 50-day price moving average crosses above the longer-term 200-day average.

“Gold is already outperforming most other asset classes including stocks, bonds and other commodities, gaining 10% over the past four months.”

And historically speaking, this “golden cross” action means good things for gold investors. “When a golden cross signal appeared for the yellow metal in early 2016, gold went on to shine, gaining another 20% over the next six months,” Mike says.

So how’s gold getting such momentum?

“Up until now, the rally in gold was driven in large part by short covering among hedge fund investors,” Mike continues.

“Speculators built a sizeable net-short position in gold futures between August and October 2018, just as the yellow metal bottomed out and started its 10% run-up.”

What a difference a couple volatile months makes… “Now the Wall Street pros are jumping on the golden bandwagon.

“Goldman Sachs, for example, recommended in a recent report an overweight position in gold. They also raised their 12-month price target for the precious metal to $1,425 an ounce.

“That would be at least another 10%-plus move for gold from here, to the highest level since 2013,” says Mike. “Breakout!”

The “conversation heart candy” — Sweethearts — ubiquitous on Cupid’s favorite day of the year, won’t be on drugstore shelves after candy maker Necco went out of business in July.

The candy hearts that are inscribed with sentiments like “Bear Hug,” “Sweetheart” and the classic “Be Mine” have inspired puppy love for decades. 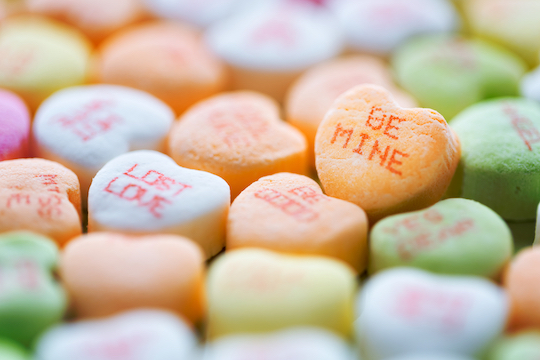 There’s good news: The Spangler Candy Co. bought the Necco Wafers and Sweethearts and should start manufacturing the candies next year.

But if you’re really jonesing for Sweethearts in time for Valentine’s Day, you can always log onto Amazon. We found them for as little as 92 cents an ounce. (Heh… maybe we should start adding the price of Sweethearts to the market notes?)

On second thought, the chalky Sweethearts would probably survive a nuclear bomb — just (hopefully) like the love they’ve inspired.

P.S. Don’t forget… Zach’s “One Day Bonus” indicator’s signaling another buyout opportunity… And if you play this opportunity right, you could lock in a 6,567% return!

Because these buyout deals happen fast, you can’t afford to wait. Learn all the details right here.