When “Buy and Hold” Isn’t Enough

“When I first wrote my best-selling book An American Hedge Fund, several ‘financial experts’ told me straight up that I was crazy,” says penny stock trader and expert Tim Sykes.

“They didn’t think average retail investors and traders would understand my niche strategy that, I’ll admit, was definitely not ‘buy and hold.’”

For those of you who might not remember, Tim Sykes is anything but a “buy and hold” guy. Tim’s been trading penny stocks since his days as an undergrad at Tulane University, when he started turning a small stake into a $4.8 million fortune.

“I like to start my story with just a PENNY,” says Tim, “because I’m a penny stock trader at heart. And I want to show people how big that penny can grow.”

“The mainstream’s investment strategy, a strategy that at best earns them 10% a year, maybe 20% in a truly exceptional year” — that’s just not good enough for Tim.

“They tell you to save money for 30, 40 years and let your wealth compound over the decades,” he says. “Then you might have a chance of retiring with enough money.”

A chance? According to a 2016 TD Ameritrade study, a full 25% of Americans say they’ll never be able to retire. Ever. And that sentiment’s shared by millennials all the way to baby boomers.

“How are you supposed to give your family the good life you want to provide them while still saving enough for retirement?” Tim says.

Truth is, many Americans cannot — or do not — and the research bears that out.

Northwestern Mutual’s 2018 Planning and Progress study shows 21% of Americans have nothing at all saved for retirement while a further 10% have managed to scrape together $5,000 for their “golden years.” 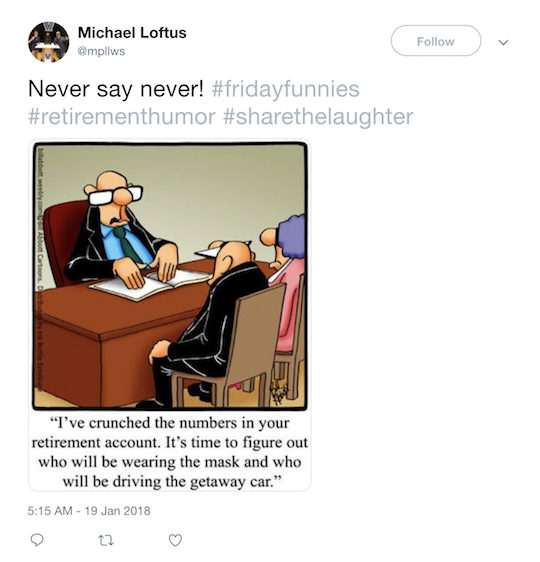 “Meanwhile, the average Social Security benefit of about $1,400 is an absolute joke,” Tim says. “Good luck paying all your living expenses and medical bills with that pittance.”

He calls it “a crisis in the making.”

On the flip side: “Let’s say you’re approaching retirement and you’ve managed to have a nice nest egg saved up…

“What if a market crash comes along and wipes out half your wealth practically overnight?”

Perhaps you can relate… especially if that was your portfolio during the Great Recession.

“Although it wasn’t the greatest percentage decline in history, it was vicious.”

The Great Recession notwithstanding — the markets are experiencing wild swings now. “These past couple of months have proven how hard and fast markets can fall,” Tim continues. “We’ve seen plenty of days where the Dow has lost several hundred points in a day.

“And if you’re a ‘buy and hold’ investor, your investments have probably suffered,” Tim says. “This is serious business now.

Tim says: “That’s why I was happy to unveil a brand-new strategy… that lets you steer clear of market collapses.

“That’s because it doesn’t involve risky ‘buy and hold’ strategies that leave you vulnerable to a crash.

“You’re in and out too fast,” says Tim. “It gives you maximum flexibility and puts you in charge of your investments, not some broker who wants you to buy and hold so he can charge you all kinds of fees and commissions.”

Tim’s not suggesting you go all in on his strategy; diversification’s necessary. “But putting a portion of your portfolio into it could be extremely valuable.

“Look, if you ask me, following traditional financial advice is among the riskiest things you can do with your money,” says Tim, “because your money’s tied up in ‘buy and hold’ investments that are highly vulnerable to a crash.”

But… “if you know how to use my strategy,” he says, “you’re in and out before a crash can erase your wealth.”

Because Tim’s strategy “greatly reduces your vulnerability to a market crash,” he concludes, “it’s like having crash insurance.”

[Ed. note: Is it time to retire your “buy and hold” approach to retirement? And reduce your nest egg’s vulnerability… while watching profits add up in your account?

You’ll want to start right away for a cash windfall as early as Monday.

Click here to see how you can start making money this weekend — and almost every weekend thereafter.]

“The state of the stock market is… a little complicated these days,” says Agora analyst Greg Guenthner.

“Late last week, the Dow was the first of the major averages to make it back to its 200-day moving average following the sharp fourth-quarter correction. The blue chip index broke through this line in the sand with little trouble to begin the trading week and hasn’t looked back.” 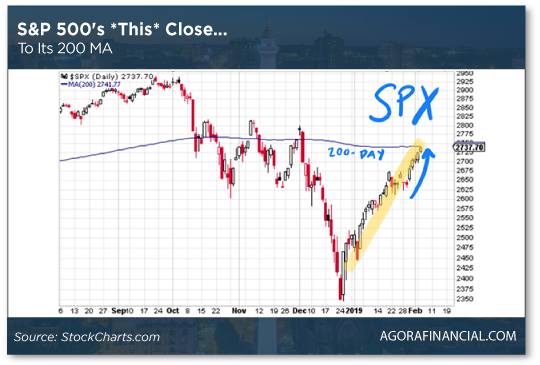 Then there’s the Nasdaq: The index gained the most percentagewise in January… but is that necessarily a good thing?

Greg notes this weird market quirk: “When the index rises by 9% or better in January, the following February averages a decline of 0.44%.”

For what it’s worth, Kudlow went on to say Trump’s feeling “optimistic” that a deal will be struck between the two global superpowers before new tariffs go into effect come March. 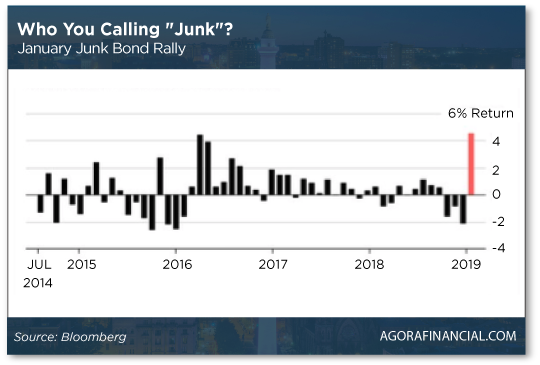 Mike says: “This tells me that the normally recession-wary junk bond investing crowd are very confident about the state of the economy.”

Need more evidence that December’s sell-off’s a thing of the past?

Not only that but the tech-laden Nasdaq was up 9% and the small-cap Russell 2000 index gained 11%.

“And if the old but reliable adage ‘As goes January, so goes the year’ holds true again, there should be plenty more upside to come.”

“And the icing on the cake was the Federal Reserve’s drastic U-turn on interest rates,” Mike continues.

Fed chairman Jerome Powell said “financial developments” came up (pssst… a sagging stock market) that put the brakes on rate hikes while hinting the Fed might rein in quantitative tightening, too.

“The Fed just put a floor of support under the stock market,” says Mike “exactly what the bulls wanted to hear.”

(Twenty-five-year investment veteran Mike Burnick has taken the wraps off a way American seniors can add as much as $383,515 to their retirement… Starting as early as today, Feb. 7.

We reported on this phenomenon in November when the average Brexit Box was simply a collection of gourmet EU items people stashed away in case of disrupted supply lines.

Things like bottles of tonic water, coffee and French marmalade are hardly necessities — well… a case could be made for coffee — but the Brexit Box has become something altogether different (think Cormac McCarthy’s The Road meets Y2K).

“The ‘Brexit Box,’ retailing at 295 pounds ($380), provides food rations to last 30 days, according to its producer, businessman James Blake, who says he has already sold hundreds of them,” Reuters says. 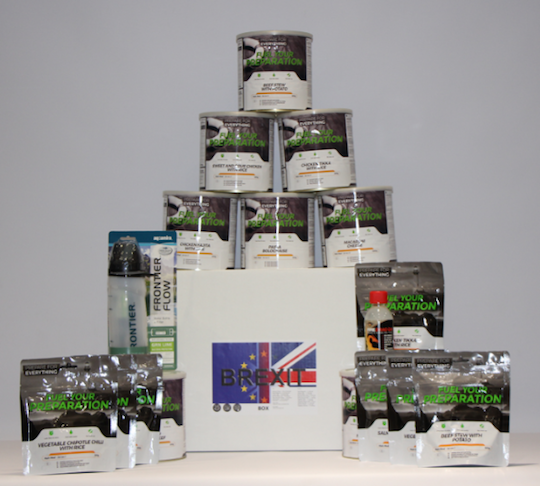 The box, however, doesn’t contain lifesaving medications some patients depend on.

To that end, “pharmaceutical companies have been asked by the Department for Health and Social Care (DHSC) to have a minimum of six weeks’ extra supply over and above their usual reserves,” reports Time.

“Dr. Liz Breen, a researcher in health service operations at the University of Bradford, believes pharmaceutical supply chain shortages are relatively common,” Time says, “but that a no-deal Brexit could exacerbate the problem.”

That’s grim news for insulin-dependent patients, for example; a rep at health care company Novo Nordisk says, “We import everything — no insulin is made in the U.K….”

Even though Britons probably won’t be able to stockpile meds — we said it in November and it bears repeating — if you do a little prepping for what turns out to be a nonevent, no harm, no foul, right?

P.S. Are you worried recent market volatility is the beginning of a bigger crash?

Or do you think the bull market still has legs?

Either way, you should learn about this remarkable strategy that’s upsetting Wall Street’s status quo… and might change the way you grow your wealth.

If you’d like to know the secret of making money in this crazy market, we urge you to click now.