“The big M&A deal of the week was the announced merger of BB&T with SunTrust,” says an article at Axios.

Upon approval, the merged banks — still no name announced — will move to Charlotte, North Carolina.

“The merger is ambitious,” Axios says. “The word ‘mega-bank’ has been thrown around…”

Which is something the banking industry hasn’t heard since before the market’s crash when huge bank mergers were de rigueur.

The largest U.S. bank today, in fact, put the “mega” in merger when it gobbled up smaller banks, credit and mortgage companies.

It all started when Chase Manhattan bought J.P. Morgan in 2000 — an all-stock deal valued at $30.9 billion.

The ensuant JPMorgan Chase in 2004 went on to buy Bank One… and acquired CEO Jamie Dimon in the process.

Then with Wall Street’s house of cards collapsing in 2008, Dimon’s mega-bank made a deal with the devil — er — government.

When investment giant Bear Stearns — with reams of toxic mortgages on the books — came to its breaking point, the government stepped in with a too-big-to-fail offer.

“At the request of the government, JPMorgan… agreed to rescue Bear for $2 a share, a stunning fire-sale price that was eventually raised to $10,” CNBC says.

Even at that, it seemed like a sweetheart of a deal for JPMorgan; Bear’s stock was selling for $30 per share at the time (only a fifth of what a share sold for at Bear’s height… but still).

To further sweeten the deal, the Fed agreed to subsidize $30 billion of Bear Stearns’ mortgage holdings.

At the time, Dimon believed bringing Bear Stearns into the fold had the potential for $1 billion in revenue gains.

Yeah… not so much.

All told, JPMorgan Chase was on the hook for $19 billion in fines and settlements related to Bear — and another toxic acquisition: Washington Mutual.

Would Dimon do it all over again? “In case you were wondering,” Dimon wrote shareholders in 2015, “No, we would not do something like Bear Stearns again — in fact, I don’t think our board would let me take the call.”

(For the record, things seem to have worked out swimmingly for the numero uno mega-bank.) 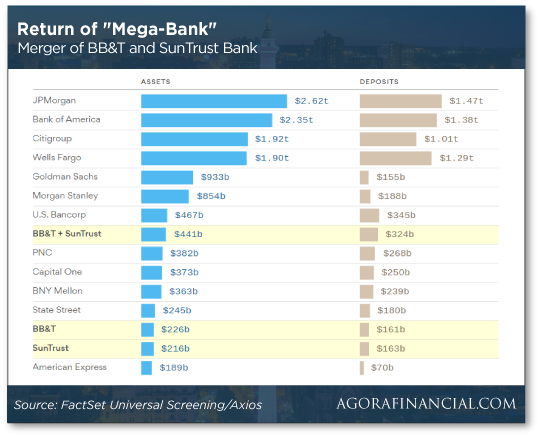 The approved BB&T and SunTrust merger will make it the eighth-largest U.S. bank, with $441 billion in combined assets — so hardly a trillion-dollar-plus mega-bank. (More like a mini mega-bank — sorta like jumbo shrimp… only in reverse.)

But size isn’t everything…

“After the deal was announced,” he says, “front traders pounced on other regional banks — betting big on more bank mergers.”

“Make no mistake,” Zach says, “these buys are only the start of a bigger bet on financials…”

Not only that: “Mergers beget more mergers,” says Zach, and “that means plenty of upside…”

And as mergers heat up, that means incredible opportunities for Zach’s proprietary system that’s so powerful…

Today — for serious readers only — Zach’s applied a $557 credit to your account to use toward this offer, something he believes is the only strategy that might make you a millionaire.

Please note this offer is limited to the first 100 that take advantage this hour.

So don’t waste another minute.

“The Small Business Optimism Index declined 3.2 points, to 101.2, the lowest reading since the last three weeks of November 2016,” says the NFIB Research Foundation.

“Business operations are still very strong, but small-business owners’ expectations about the future are shaky,” says NFIB Chief Executive Juanita Duggan. “One thing small businesses make clear to us is their dislike for uncertainty, and while they are continuing to create jobs and increase compensation at a frenetic pace, the political climate is affecting how they view the future.”

January was especially “uncertain” — what with the longest government shutdown in U.S. history, wrangling over the federal budget and slowdowns in European and Chinese markets.

To the markets today, where the Dow’s surged almost 350 points on news that Trump’s “open” to letting the March 1 tariff deadline with China slide…

Not only that, but the president says a second government shutdown’s unlikely after reaching a tentative spending agreement that includes roughly $1.4 billion for 55 extra miles of a “barrier” — not a wall — on the U.S.-Mexico border.

Ah, well, can’t have everything…

“Pot’s in early innings,” says our cannabis stock expert Ray Blanco, “and banks are still driving to the stadium.”

While 64% of Americans now have access to legalized marijuana — be it medical or recreational — banks have been slow to accept money related to the legal sale of pot.

Since the marijuana industry in the U.S. is expected to grow to $25 billion by 2025, Ray asks, “Where is all this money going?

“This is creating a void for a much-needed service to the booming pot industry. I think it’s only a matter of time before banks get with the program.”

Ray says: “The first few [banks] that do could make great pick-and-shovel plays in the pot industry.

“It could even anoint smaller private banks to the publicly tradable sphere, offering even more ways to book profits off this industry.”

In the meantime, Ray’s looking at a couple regional, publicly traded banks to be the first to break into “cannabanking”:

“The soon-to-be No. 1 lawman in the land has stated he will not target any aspects of the legal marijuana industry and will respect states’ rights to operate according [to] their own laws.”

Ray says: “I think this means smaller regional banks could soon have a clear path to operate in the pot space, opening up a new way to play the space.

“Of course, as of right now these are speculative ideas we expect to manifest down the road,” Ray concludes. “However, a prepared trader is a paid trader.”

“So you think the dating scene is like a meat market?” BBC asks. “Well, wait till you hear about the latest matchmaking app.”

The dating app Tinder, where singles (presumably) post their pics and bios in hopes of romance, has been replicated. This time for bovines…

“U.K. farming startup Hectare has launched its own equivalent for livestock and called it Tudder.”

BBC says: “The app features data profiles of animals from 42,000 U.K. farms in an effort to help farmers find the perfect breeding partner for their cattle.”

Just like Tinder, matchmaking farmers can view pics of bulls or cows on the Tudder app and swipe right if interested or left if less than impressed.

As for The 5, we know one cow that’d have all the bulls hoofing right — every time… 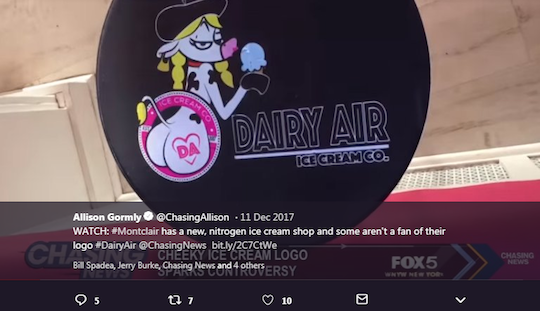 My milkshake brings all the [bulls] to the yard…

That’s right… this sexy cow was too hot to handle as the logo for a Montclair, New Jersey, ice cream parlor; outraged residents forced the store’s owner to remove the overexposed heifer.

But we have a feeling she’d be perfect for Tudder…

As for her profile? Here goes: “Jersey girl seeks Guernsey guy for more than just a roll in the hay. I’m looking for a stud who really ruminates about the important things in life — but also has the bollocks to stand up for me. No B.S., please. Beefcakes only.”

Apropos of “Brexit Boxes,” a reader says: “Love your writing and humor, but…”

Knew that was coming…

In light of chicken mince, “I think you missed a [pun]: ‘Even though Britons probably won’t be able to stockpile meds… if you do a little prepping for what turns out to be a nonevent, no harm, no fowl, right?’”

The 5: Good one! (How’d we miss that?) However, I think we more than made up for the missed opportunity to be “punny” today…

P.S. On behalf of Agora Financial…

Please note this offer is limited to the first 100 that take advantage this hour.

This situation is urgent…

So don’t waste another minute.