We start our issue today with a metaphor taken from the game of golf….

Zach poses a riddle: How can the most god-awful golfer in a given group still win? The answer has everything to do with the player’s handicap.

A handicap levels the playing field — in this case, the golf course — by assigning a number to a player based on his ability. At the end of the game, the number’s subtracted from the player’s total score; the resulting net score is par or better about 50% of the time.

So… the worse the player, the higher his handicap and the lower his score. (In golf, the lower the score, the better.) 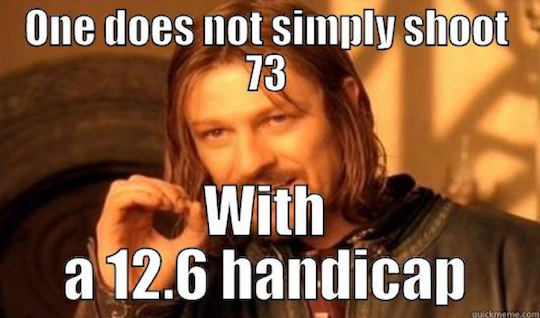 Lord of the Links

“The only problem is,” Zach says, “people can intentionally write down poor scores… to set the bar low. Most players call this ‘sandbagging’ and it’s definitely an unfair way to win.”

*Gasp* We are SHOCKED… cheating at GOLF?

“Corporate executives have been sandbagging in their own special way,” Zach says, “telling investors to expect weaker earnings through the rest of the year.

“But if you look carefully at what’s going on behind the scenes, a different story emerges.”

As Q4 earnings reports come out, you might notice corporate profits for the last quarter of 2018 were strong; the average S&P 500 company, in fact, increased profits by about 28% — something that’s causing stocks to float up and to the right so far this year.

“But there’s one problem with earnings season this month,” says Zach. “Executives have been telling investors to expect weaker profits for the rest of the year.

“According to Bespoke Investment Group, the guidance numbers for this quarter are some of the weakest over the last 15-plus years!”

Something isn’t adding up: “What’s driving this poor outlook?”

“Second, the government shutdown has been a big issue as these executives put together their talking points,” says Zach. “With so much uncertainty (and potential fallout with millions of Americans missing paychecks), it makes sense for companies to be a little cautious moving forward.

“Finally, the trade war with China may be on hold, but it’s not solved yet,” says Zach.

Treasury Secretary Steve Mnuchin meets today in Beijing with Chinese officials in hopes of forestalling the March 1 deadline for the next trade war salvo — the U.S. increasing tariffs on $200 billion worth of Chinese goods from 10% to 25%.

As for the March 1 deadline, Trump said: “If we’re close to a deal where we think we can make a real deal and it’s going to get done, I could see myself letting that slide for a little while.

“But generally speaking, I’m not inclined to do that,” Trump said. 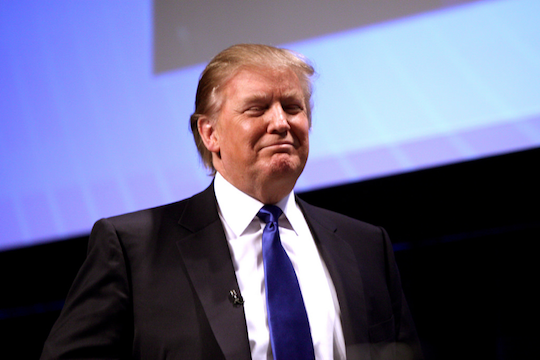 Art of the hedge…

“We’re still waiting to see whether the U.S. and China will be able to hammer out a deal,” says Zach. “And that deal could have an impact on how different companies generate profits this year.”

Add it all up — decreased corporate profits, a will-they-or-won’t-they government shutdown and trade war histrionics — “and you can see why executives are managing investor expectations.

“While I don’t necessarily blame managers for being cautious with their guidance,” says Zach, “the evidence that I’m seeing right now points to a much stronger environment for stocks this year.

“For instance, sales growth has been rising at the fastest level in several years.” And these numbers aren’t related to corporate tax cuts.

“So this gives us a more accurate picture of how the economy is growing and how consumers are spending money.”

Not only that: “Corporate spending is also picking up,” says Zach. “And this year, that spending will continue to grow.”

That certainly can be said of the FANG companies — all four plan to increase expenditures to grow business.

“Facebook will spend an extra $4–6 billion more than last year’s $14 billion on growth opportunities,” Zach says. “And Amazon will be spending more this year to build out its AWS cloud service business.

“Google’s chief financial officer Ruth Porat noted that the company will undergo an uptick in purchases of servers and other equipment.”

The better to spy on you with… kidding, kidding.

“All of this spending will help companies that supply key products and services for growth projects.

So… “With corporations encouraging caution but the economy exuding strength, something’s gotta give this year.

“At this point,” Zach says, “investor expectations are fairly low.”

But what happens if or when…

“With the bar set so low,” Zach continues, “it won’t take much for companies to perform better than expectations.

“Investors with cash on the sidelines will scramble to get more of their capital in play. And as their buy orders hit the market, stocks will naturally rise,” says Zach.

“But you need to make sure you’re locking in your investments ahead of time, before prices start moving higher.”

But the account credit is on the table only through MIDNIGHT TONIGHT.

Click here to learn more… and claim your $557 credit!]

To the markets, which are shrugging off a punk retail sales number. The Dow’s down about 30 points, to 25,515…

Retail sales, in fact, fell 1.2% in December — smack-dab in the middle of holiday shopping season; that’s the steepest drop since September 2009.

“Even more surprising, sales at internet sellers tumbled 3.9%, marking the worst performance since November 2008, in the midst of the financial crisis.”

Shares of most retailers slumped today as a result of the news, including Amazon shares, which trimmed 1.2% off their price.

But don’t you worry about Amazon…

“Amazon, which doubled its profits and made more than $11 billion in 2018, won’t pay any federal income taxes for the second year in a row,” according to the Institute on Taxation and Economic Policy, written up in The Week.

What’s up with that?

It’s something The 5’s been asking since April 2018 when we reported: “Amazon (AMZN) collected a $137 million rebate — good for an effective tax rate of minus 2.5% — by seizing on a tax break that lets companies write off the value of executive stock options.”

This year, Amazon won’t have to shell out the standard 21% income tax rate on its 2018 profits either, instead claiming another tax rebate of $129 million, something ITEP describes as “a tax rate of negative 1%.”

To further raise the hackles of all American taxpayers — who don’t happen to have Jeff Bezos’ billions — because Amazon is headquartered in no-income-tax Washington state, the online mega retailer doesn’t even pay state taxes.

We think the word’s “apoplectic”…

[Just in: Amazon has junked its plans to build an additional headquarters building in New York City. Some of the local politicos took exception to Gov. Andrew Cuomo’s plans to offer Amazon nearly $3 billion in “incentives.” Timing, huh?]

We said Monday palladium prices are now higher than gold — and are expected to climb higher as auto parts makers report supply shortages.

“Palladium prices have surged by around 70% in the last six months to record highs above $1,400 an ounce,” says Reuters.

Stricter vehicle emissions measures — particularly in high-population centers like China and India — are increasing the demand for the metal, a key component in pollution-reducing catalytic converters. And in spite of recycling efforts, palladium suppliers are struggling to meet the demand.

For investors: “Palladium-backed exchange-traded funds (ETFs) would no longer be able to bridge the gap between supply and demand by returning metal to the market,” Reuters says.

Weep not, Californians… the darling of former Gov. Jerry Brown was DOA.

And current Gov. Gavin Newsom finally pulled the plug in his state of the state address Tuesday, saying it “would cost too much and take too long.” In fact, latest estimates put the completion of the bullet train in 2033 at a cost of $77 billion.

During his campaign, Newsom largely stayed mum on the project; after he was elected, he recommended a scaled-back train that would connect San Francisco to the Central Valley of California.

As of Tuesday, Gov. Newsom wants to complete a train that connects Bakersfield to other parts of the Central Valley.

Talk about scaled back!

“Californians are just going to be left with a train in the middle of some of the more rural parts of the state, because the Newsom administration doesn’t want to have to repay [$3.5 billion in] federal funding,” says Reason.

Then there’s this: “The announcement is also a bit of a kick in the teeth for the proposed Green New Deal by progressive Democrats in Congress.”

“The Dutch government sees Brexit not as the elephant in the room but as a giant Muppet-style monster lying on a desk,” the BBC says.

He’s already a hit on social media — the furry, blue “Brexit monster” that’s the brainchild of the Dutch. 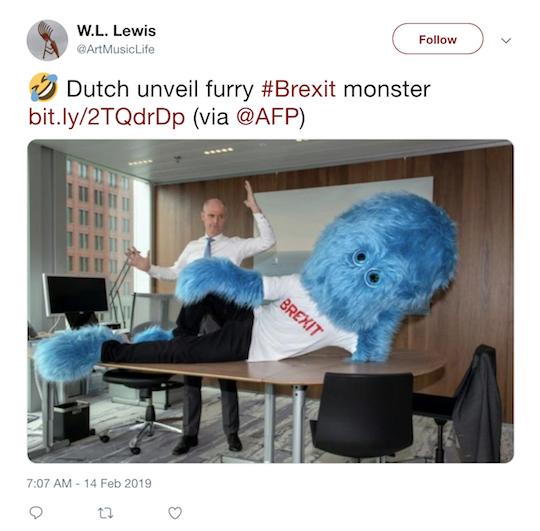 First tweeted by Foreign Minister Stef Blok with the attached warning: “Make sure Brexit doesn’t sit — or lie — in your way.”

Hmm… we think something might have gotten lost in translation… awkward. (On second thought, English is widely spoken in the Netherlands… so just awkward.)

Nevertheless, the Brexit mascot gets a point across — “to warn Dutch businesses about the looming impact of Brexit.”

If the U.K. separates from the EU without a deal in place by March 29, “Brexit could deliver a major blow,” says the BBC, because “the Netherlands is among the U.K.’s top trading partners.”

But Brexit might just be a boon for the Netherlands; as a result of the U.K.’s breakaway, 42 companies have already relocated to Holland, adding about $328 million to the economy.

But for a people who notoriously love order, the U.K.’s supposed apathy about getting a Brexit deal done before the March deadline has Dutch officialdom pulling their (blue?) hair out.

We get an idea of their officiousness from journalist Anna Holligan: “In the Netherlands,” she says, “you can always be sure of a stranger reminding you to follow the rules.” Sounds like fun… heh.

And in this case, a giant blue Brexit monster reminding the U.K. to get their collective stuff together….

P.S. Zach Scheidt has applied a $557 credit to your account to use toward what he believes is the only strategy that might make you a millionaire.

Please note: This offer will be taken off the internet at MIDNIGHT.

So don’t waste another minute…