Wait Till You See How the IRS Screwed Up

And now for a (mostly) meaningless mainstream media headline… 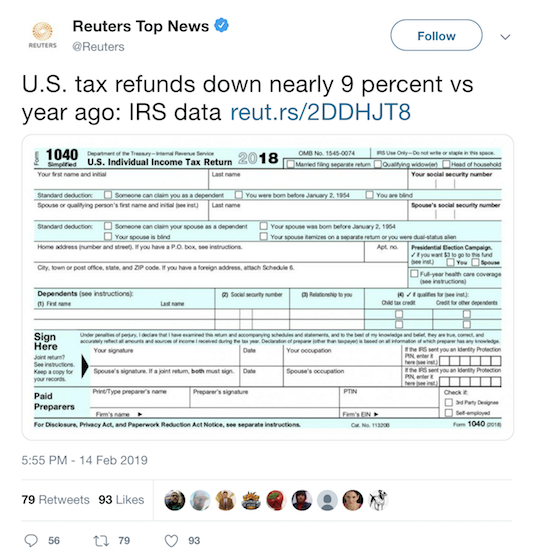 Reuters elaborates on the headline like so: “Data covering the first 12 days of the new tax season showed an average refund of $1,949 for the 2018 tax year, when Trump’s tax cuts for businesses and individuals took effect. That is 8.7% lower than the $2,135 average from a year earlier.”

The total number of refunds is down, too.

We’re not saying this development is a nonstory. Far from it.

As The Associated Press reminds us, “Refunds become an annual check that some three-quarters of U.S. taxpayers typically count on. For some lower-income households, it is the biggest cash infusion of the year.”

It’s at this point we’d typically insert the disclaimer about how personal finance gurus will tell you getting a big refund is dumb because you’re giving Uncle Sam an interest-free loan on money that even the IRS concedes belongs to you. So you need to keep an eye on your paycheck withholding and adjust accordingly. (You knew that already, right?)

The problem is the IRS botched its withholding guidance last year. Badly, it seems.

A report from the Government Accountability Office last August found over 20% of wage-earners weren’t having enough withheld and thus would end up stroking a check to the IRS come April 15.

As the AP article explains, “The decline [in refunds] may be largely due to how some employees and employers had adjusted the amounts withheld from paychecks to account for changes under the new tax law.

“Most taxpayers received a tax cut under the law but some may have had too little withheld, resulting in a smaller-than-expected refund, or even money owed to the government.”

Naturally, the phenomenon is becoming a political football.

Democrats are trying to make hay out of it: “Middle-class families are seeing their tax refunds shrink,” says presidential candidate Sen. Amy Klobuchar (D-Minnesota), “while big corporations and the very wealthy are still enjoying a huge tax cut.”

Surely you see the leap of logic there. So does Senate Finance Committee Chairman Charles Grassley (R-Iowa). “What your refund is — that doesn’t tell you what taxes you pay.”

But Grassley has himself to blame along with the rest of the congressional GOP leadership and the White House too.

The way the law was written, the benefits of the tax cut just weren’t tangible or visible to large numbers of working Americans.

For starters, the withholding adjustments came early last year — around the same time employers were also adjusting paychecks for health insurance premiums. For some workers, higher premiums offset any gains from the tax cut.

And for people who did see a bump up in take-home pay, much of those savings were consumed by gasoline prices that rose an average 50 cents a gallon the first five months of the year. Result: The tax cut didn’t deliver any improvement in Joe Sixpack’s standard of living.

Contrast the Trump tax cut with the Bush 43 tax cuts — especially the first one.

At the very moment the 2001 recession was setting in, most Americans got a check direct from Uncle Sam — from $300 for single filers with no dependents up to $600 for married couples.

That was tangible and visible. It might be one reason the president’s party added to its congressional majorities in 2002 — a rarity among recent midterm elections.

“It really isn’t a bellwether — we just have very early information,” Howard Gleckman of the Urban-Brookings Tax Policy Center tells CNBC. “There’s a lot of missing data here.” It won’t be until this time next month that we’ll know if the lower-and-fewer-refunds trend is real.

[Ed. note: You’ll want to hold off on filing this year until you see the Rich Dad 2019 Tax Guide — prepared by Robert Kiyosaki and his crack team of tax experts.

It’s packed with 91 tips and tricks to maximize your refund (or minimize what you owe). The “paycheck loophole” on Page 17 alone could be worth $13,000 or more.

To the markets, which are rallying hard on good vibes coming from the U.S.-China trade talks.

To be sure, traders appear unfazed by the president’s declaration of a “national emergency” at the border. (Perhaps because the nation remains under 31 other states of emergency declared by presidents going all the way back to Jimmy Carter.)

Also having no impact on the markets today — a miserable industrial production number from the Federal Reserve.

The figure registered a 0.6% drop in January. Oops, the “expert consensus” was looking for a 0.1% increase. The mining and utility sectors still look strong, but manufacturing looks feeble — especially vehicles and business equipment.

Also disappointing is the capacity utilization figure; 78.2% of the nation’s industrial capacity was in use during January — also way off the mark relative to expectations, and the lowest figure in six months.

Vice President Pence sees the “de-dollarization” trend plain as day… and he’s fuming that there’s nothing he or anyone else can do about it.

Of course, that’s not how the story was portrayed in the media. Here’s Reuters again: “U.S. Vice President Mike Pence accused European powers on Thursday of undermining Washington’s crackdown on Iran by trying to break U.S. sanctions against Tehran, in remarks that were likely to further strain transatlantic relations.”

We told you two weeks ago how Germany, France and the United Kingdom have launched something called INSTEX — which would give European companies a way to trade with Iran even though Iran is barred from the global clearinghouse for cross-border financial transactions called SWIFT.

Pence, speaking at a conference in Warsaw, was beside himself yesterday — describing INSTEX as “an effort to break American sanctions against Iran’s murderous revolutionary regime. It is an ill-advised step that will only strengthen Iran, weaken the EU and create still more distance between Europe and the United States.”

This is what it looks like when Europe chafes against Washington’s role as “the economic policeman of the planet.”

Those were the words of French finance minister Bruno Le Maire nine months ago, when Donald Trump announced Washington would pull out of the Iran nuclear deal and reimpose sanctions.

Germany, France and the U.K. are also parties to that agreement, and Pence demanded they too pull out. But the Europeans see no reason to do so. After all, Iran is crawling with U.N. nuclear inspectors who continue to affirm Tehran is abiding by the deal.

Already, U.S. sanctions and similar measures are targeting the governments of nearly two dozen countries comprising more than a quarter of the globe’s population. Those governments are pursuing more and more efforts to get out from under the U.S. dollar’s thumb.

If the Europeans actually join them, it’s all over for the dollar’s status as the world’s reserve currency. Pence just gave them an extra push to do so.

Yes, it’s a prime location, but it’s another instance of how the funny money created by the Federal Reserve doesn’t get distributed equally to everyone. It goes into places like Washington, D.C., Silicon Valley… and Portsmouth, New Hampshire, an hour north of Boston.

The real attraction of the property isn’t the shack, of course — it was once a candy store, we’re told — but rather the third of an acre near the waterfront. 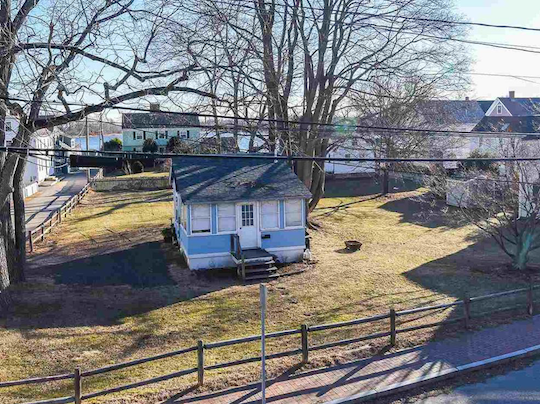 The listing is upfront about “the rare chance to build your dream home on the last large lot available in Portsmouth’s historic and highly sought after South End.”

Ah, but wait: “The little building, which someone now calls home, will have to be reviewed by the Historic District Commission if a buyer plans any change,” reports The Portsmouth Herald.

So much for the tennis court, huh?

In any event, the locals who’ve been around a while are floored by the asking price. “I can’t believe it,” Ruth Griffin tells the paper. She’s been a resident since 1938.

Then again, a property near Griffin’s home recently sold for $1.3 million and she says, “We were all dumbfounded.”

“I’m no fan of Jeff Bezos or of Amazon’s employment practices,” a reader writes after we noted yesterday that for a second year running, AMZN has avoided corporate income tax. “By all accounts, it sounds like a terrible company to work for unless you’re in upper management.

“But regarding the taxes Amazon isn’t paying: Those savings can be passed along to its customers in the form of lower prices. They can also be reinvested to grow the company’s economy of scale — and further enhance its pricing power.

“By the way, they also don’t like charging sales taxes. Love them or hate them, Amazon saves a lot of people a lot of money on lots of stuff, every day. And hats off to them for thumbing their nose at the People’s Republic of New York and its corrupt, draconian taxes.

“So even being the politically connected, crony capitalist ‘monopoly’ that it is, Amazon may be the most consumer-friendly retailer in history. I have been a regular customer for 20 years.

“Years ago, Walmart was being peppered with similar criticisms and accusations. Years from now, a competitor may overtake Amazon and become the next retail juggernaut. The gubment just needs to let free markets work and stop perverting things all over the place.”

The 5: Uh, are we taking the title of Ayn Rand’s famous essay, “America’s Persecuted Minority: Big Business” a little too seriously?

Indeed, the carping about the incentives might not be the main reason Amazon’s abandoning the project.

“During the closed-door meeting in Long Island City, company officials defended their labor policies and facial recognition technology in response to months of public backlash, according to people who were there.”

No mention of the incentives. Ninety minutes after the meeting wrapped up, the deal was dead.

Could the real problem have been New Yorkers objecting to Amazon’s ambitions to amp up the surveillance state? Hmmm…

P.S. The new tax law closed many “loopholes”… but many others remain open, and it’s more critical than ever that you know about them so you can take advantage.

Robert Kiyosaki and his team have just put the finishing touches on the Rich Dad 2019 Tax Guide — packed with 91 things you could do to slash your tax liability, fully revised and updated to reflect all the changes to the law.

This information could be worth as much as $23,966 to you. And you can obtain it free. Click here and grab your copy now before you file.